If Christ Jesus dwells in a man as his friend and noble leader, that man can endure all things, for Christ helps and strengthens us and never abandons us. He is a true friend. Saint Teresa of Avila link 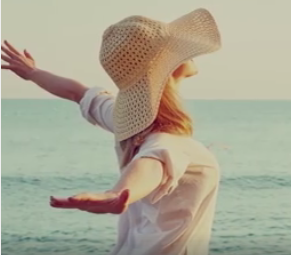 Important Message to Anonymous Emailer: I have misplaced your return email address. You are a brave women and I want to support you in any way I can. Could you please resend the email? This post should help you to know whom I am referring to. I am so sorry.

How I learned that pastors and celebrity can sin as much as anyone else and sometimes worse than anyone else.

I have spoken on numerous occasions about what happened when the Deebs, as well as other friends, confronted a former church about a mishandled pedophile situation. While that pedophile is in jail, the church denied that they had any responsibility to report the early warning signs of sexualized behavior. Then, when my husband and I attempted to join an Anglican church in the area, we were not allowed to join until we were reconciled to our former *leaders.* Since they would not admit to any wrongdoing, such reconciliation was impossible.

I am going to say something that might sound odd. We are glad that, if this was going to happen, that it happened to us. For the first time in my life, I began to see the underbelly of evangelicalism. Not only that but I began to see the the real gospel is lived out when sinners repent of their sin to those they harm. Sadly, none of the pastors in this scenario did that even though they were told to do so by the church leadership. And that leadership didn't follow up.

I walked away from that incident with my eyes wide open and vowed never to assume that anyone, even celebrity gospel™ leaders, was exempt when it comes to serious sin. I decided that I have no reason to believe the story of an admired pastor over the new convert to the faith. In fact, I have no reason to believe the oft quoted Christian leader over a non-Christian. We have all sinned and fallen short and that means looking at situations with open hearts. That gives me more freedom to listen to the stories of the "little guys" who are often mistreated and sidelined because they are not famous, didn't go to seminary, write a book play basketball with CJ Mahaney or give a conference.

When I read post after post about how to do *Christian obedience* from the usual suspects, I often find myself thinking "I wonder what you haven't obeyed and what you are covering up."

Touch not the Lord's anointed is not Biblical

We get lectured by the authority driven crowd, found in all sorts of churches, including Calvinista types, that we need to submit to our pastor leaders because the Bible tells us so. Frankly, I have no problem submitting to the pastors when they do things that are Scriptural like tell us where to put the coffee pots, but I will not submit to any pastor who lies, abuses the people in the church, has affairs, etc. If my pastor sins in any way that affects the members, etc. I will obey God first. In many instances this means to believe and advocate for the person who has been kicked around and abused while many in the church refuse to believe that their leaders can behave shamefully.

I am not saying that pastors are always more sinful than their church members. I am saying that they can be and anyone who takes exception to that needs to reread the Bible.

I have learned that I am not always a good judge of character and neither are lots of people. So, folks, get over it.

Sinners sin and then conceal their sin. Pedophiles, for example, are charming and suck people into their orbit. Look at all of the reports of pedophiles in the news. Each and everyone of these perverts have people who cannot not believe that these nice people could do anything like that. So, they blame the victims, even 5 year old victims.

Why? Many people refuse to admit that the ministry leaders they admired, followed, gave money to, bought tapes from, read all their books, went to the conferences, etc. could be serious sinners. They cannot cope with the thought they made an error in judgment because "he was the most awesome leader."

Instead, in order to preserve their ego, they make up the stupid excuses about how "Joe couldn't have done that. It's a set up." When Christians do this, victims are re-abused by failing to receive the care they need to heal from being mistreated.

Do what I do. Admit you were wrong and accept the possibility that your admired leader didn't deserve your devotion. It gives you freedom to look at situations through the eyes of Christ who cared for the Samaritan and had little use for many of the celebrity Pharisees of the day.

Here are some examples of artless Christianswho have hurt truly abused individuals.

Tom White The Voice of the Martyr's very own martyr!

Most of our readers have heard of Voice of the Martyrs. Dee has been aware of this organization since she was a new Christian and has supported their ministry in the past. I loved the writings of Richard Wurmbrand.

Tom White, the current head of VOM, committed suicide in 2012 when he was accused of molesting a 10 year old girl. We got lots of comments from people defending Tom White. Here is an example of an incredible ability of fans to invent incredible excuses for their chosen superstar. Tom White committed suicide, even thought he was innocent, to protect the VOM ministry! 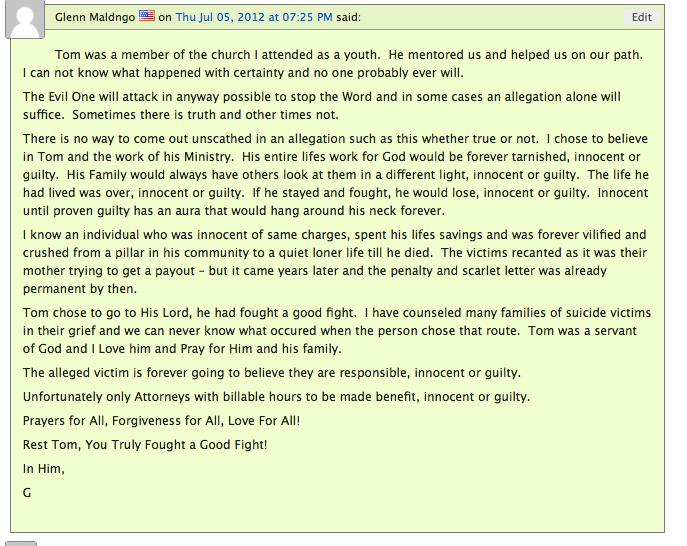 Sadly, as time has gone on, more and more questions are being raised about the activities of Tom White and VOM. White allegedly would take long tripe abroad and no one would know where he was. The excuse, of course, is that he was ministering in closed countries and was undercover… What a great position for someone who may have had a predilection for the company of children.

This man believed he *knew* Tom. He didn't. I wonder if he has read the follow-up to the stories of Tom White. One thing is for certain, I rarely ever hear back from anyone who defends the indefensible as more facts come to light.

Can you imagine the 10 year old victim reading some of the comment on the following posts?

Why TWW stands with Anne Campbell: the victimized, widowed wife of Ian Campbell

As many of you know, the recent suicide of Iain Campbell in Scotland was a real surprise to the Calvinist crowd. Campbell was an internationally admired Calvinist theologian who chose to stay on his island in Scotland to be a local pastor. Sadly, his suicide allegedly coincided with the discovery, by his dear wife, of the evidence of multiple affairs. His own presbytery has since declared that the accusations were credible.

However, guess who some of his followers decided to blame? That's right-his long-suffering, brave wife! She was the one who discovered his activities. She is the one who confronted him. So she is the one to blame, right?

We received a number of emails refusing to believe what happened. We were accused of jumping the gun. Here is one person by the name of Peter who was incensed that we believed that Campbell was a clergy abuser from the start. 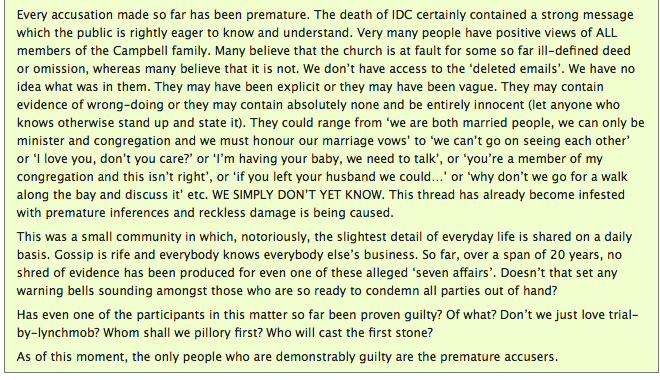 Why one earth would Anne Campbell risk her own family's peace by bringing the claims forward. Could it be that she was the true spiritual leader in that home and believed that keeping this quiet would be hypocritical?  In other words, she is a woman of action unlike her former husband who lectured about the wrongs of hypocrisy while living a hypocritical life.

There is one point that above commenter made that might have some validity to it. It is a small island and so is their Calvinist presbytery. I wonder if some folks knew about Campbell's extracurricular activities and conspired to cover it up and keep it from Anne since Iain was such a magnificent theologian? I really, really wonder…It's happened before… 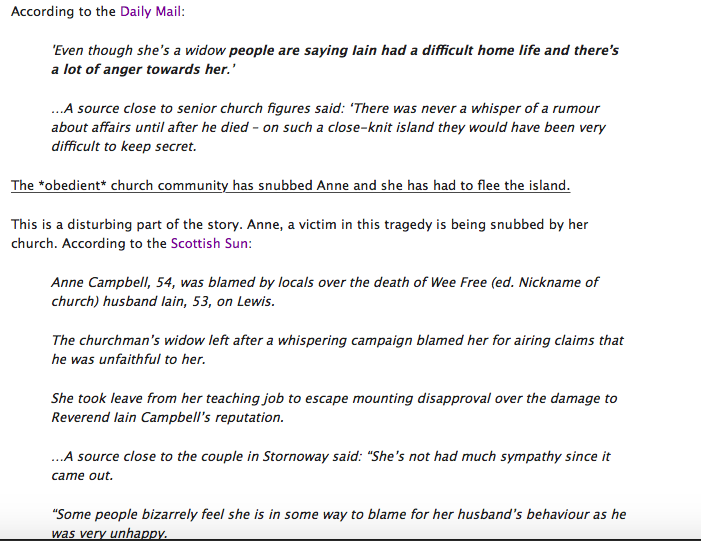 I received denials that anyone was *blaming* her. However, I also received some some emails from people who are involved with the situation stating that Anne, indeed, was being blamed for this mess. That is despicable. She is a brave woman who is bringing truth to this matter and TWW stands firmly behind her. If we hear of any sort of poor treatment, we will be shouting quite loudly from the States and we will name names. We pray for her regularly and would love to meet her one day. She is a faithful hero!

Saeed Abedini abuse of his wife was a lie made up by the Iranians!

You can read the saga of Saeed Abedini who was being held in an Iranian prison due to his Christian beliefs. I remembered to pray for Saeed every Wednesday and would tweet out reminders to others to do so. Then Naghmeh, his wife and leader of the Free Saeed Abedini movement, took a deep breath and informed the world that Saeed had been abusing her for years.

This dear, brave woman did something that was so hard to do. You can be sure that she knew she would be subject to ridicule and accusations of lying for revealing the truth of the abusive character of Saeed. Sadly, many in the Christian community responded as predicted. They blamed her and said she was lying. The question is "Why would she lie in the middle of this mess?" It was obvious that she had reached the end of her rope.

Anyone with a modicum of intelligence who understands that anyone can be a sinner, including a religious prisoner, would be prone to believe her story. Certainly, abuse advocates quickly rose to her defense, seeing the obvious truthfulness in her statements.

However, the Saeed advocates did not believe their boy could do any wrong. First, there was the "how could he abuse her while he was in prison" theory.

Poor Saeed-he was obviously the one who should be believed because he was in jail for Jesus.

And, of course, TWW always believes the men are abuserds.

Then one man decided that Naghmeh was told to say Saeed abused her so the Iranians could have an excuse to hold him longer in jail. It was all an Iranian plot! I bet the plot originated in Area 51. I will post this comment once I find it.

It is now very well known that Saeed did abuse Naghmeh, including pleading guilty to domestic violence in 2007. Thank God she was able to obtain a divorce from him so that she  and her children can live in some semblance of peace. Sadly, not one of the many men who defended Saeed has come back to try to figure out how they could be so wrong. Their words towards Naghmeh are proof positive that women are not safe in many evangelical churches when they must discuss how they are being abused.

Thankfully, many abuse advocates came out in support of Naghmeh from the start. I only wish that some church leaders had done so. They are strangely silent, even after the proof has been presented.

The following song, which I post a lot, is dedicated to Anne Campbell, Naghmeh Panahi (her new name) and the victims of Tom White.We stand with all of you and will help you in any way we can.