"I sincerely had hoped that this horrible situation Saeed has had to go through would bring about the spiritual change needed in both of us to bring healing to our marriage," she said. "Tragically, the opposite has occurred." 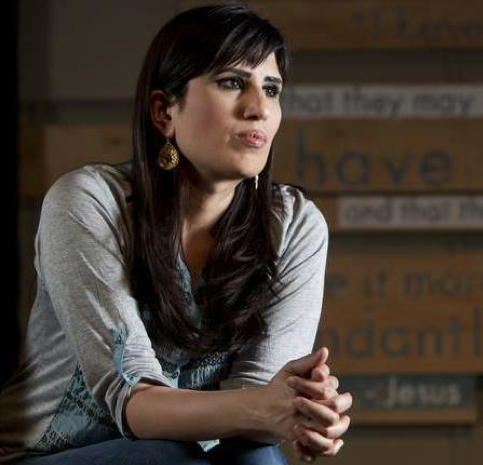 No doubt you've heard the news…  Saeed Abedini, the Christian pastor who was imprisoned in Iran in 2012, was finally released on January 16, 2016.  The Christian community had been praying fervently that he would be freed, and often I would hear interviews with Saeed's wife, Naghmeh.  Little did we know that Naghmeh was suffering in silence.

Apparently, there were serious problems in her marriage involving abuse and a pornography addiction (by her husband).  Amid so much attention during Saeed's imprisonment, it must have extremely difficult for Naghmeh to admit to a watching world that her marriage was less than ideal.

Saeed Abedini arrived home in Boise yesterday afternoon and was reunited with his children, whom he had not seen in over three years.  A joyful reunion with his wife will be much more of a challenge.  Earlier today, Naghmeh Abedini published the following statement on Facebook (see screen shots below): 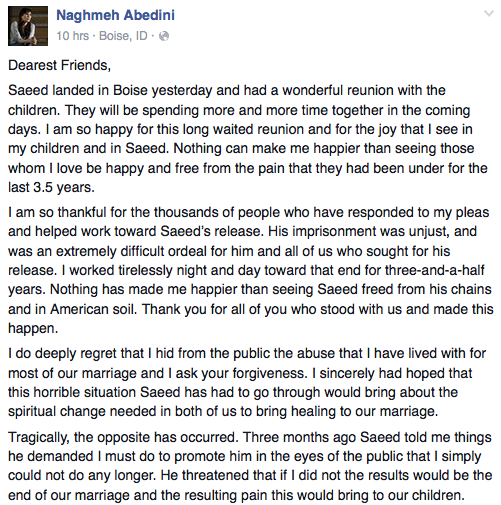 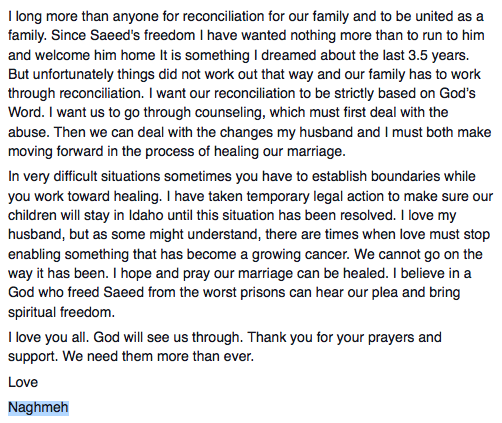 According to the local news in Boise, Idaho:

Naghmeh has filed legal papers in court regarding domestic relations. No official court date has been set in the case Naghmeh is filing.

The Baptist Press also confirmed that Naghmeh Abedini has taken legal action against her husband.  The BP article states:

Naghmeh Abedini has taken legal action against her husband Saeed Abedini to make sure their children remain in Idaho while the couple works to save their marriage, and revealed on Facebook today (Jan. 27) scant details of alleged spousal abuse she called "a growing cancer."

Naghmeh Panahi (her maiden name) vs. Saeed Abedini was filed Jan. 26 in Ada County, Idaho, before Jill S. Jurries, magistrate judge for family law in the Fourth Judicial District of Idaho in Ada County. Described as a domestic relations case, it is identified on the Idaho State Judiciary website as case CV-DR-2016-01483, and is pending.

"I have taken temporary legal action to make sure our children will stay in Idaho until this situation has been resolved," she wrote on Facebook. "In very difficult situations sometimes you have to establish boundaries while you work toward healing."

She filed the case against the 35-year-old pastor as he returned to Boise Jan. 27 from the Billy Graham Conference Center at the Cove in Asheville, N.C., his first stop in the U.S. on Jan. 21 from Iran, where he had been unjustly imprisoned three-and-a-half years because of his Christian faith.

Apparently, Saeed had not yet mentioned his marriage publicly, but he has spoken about his imprisonment.

Please join with us in praying for Saeed and Naghmeh and especially for their children.  Ironically, some of the most challenging days may lie ahead for them.  We will continue to keep you updated on this story.