"If anyone causes one of these little ones–those who believe in me–to stumble, it would be better for them to have a large millstone hung around their neck and to be drowned in the depths of the sea."

Voice of the Martyrs Headquarters

Five years ago we wrote a post on the sudden death of Tom White, Executive Director of Voice of the Martyrs (VOM), a persecution ministry located in Bartlesville, Oklahoma. The tragic news garnered headlines worldwide. White was found dead in a warehouse at ministry headquarters. The police were just beginning to investigate allegations that he had molested a young girl. Instead of facing those allegations, it was determined that White committed suicide.

Wade Burleson, who lives in Oklahoma, reached out to this young girl on April 23, 2012 in a post entitled:

The Sin and Suicide of 'Voice of the Martyrs' Ex. Director Tom White: An Open Letter to the Young Girl He Abused (link)

A week later Wade wrote a follow-up post — Tom White, Abuse, VOM, and the Power of the Internet (link)

In the intervening years, we have sometimes wondered about how VOM is faring in the wake of Tom White's death.

Recently, we received a disturbing email from Andrea Horn of Reformation Baptist Church. She also reached out to our friend Todd Wilhelm regarding reports of sexual abuse at a Nigerian orphanage connected with VOM. It has been alleged that the director of the Stephens Center – Isaac Newton – has been habitually abusing girls in the orphanage. Todd has put together an informative post which he published last week, and he has given us permission to re-post it for our readership. Please join us in praying for those who have been hurt in Nigeria.

After reading this article I would urge you to sign the petition.  I have placed three links to the page in this article where you can do that.

When I think of Evangelicalism today suffice it to say that my head is not filled with pleasant thoughts. I could write a litany of detailed corruption amongst the celebrity leadership, and in fact I initially did so, but instead of rehashing the many negative stories I chose to delete a few hours of work, assuming that my readers will not contest the fact that American Evangelicalism is a ship that is badly listing.

I want to instead highlight Reformation Baptist Church, a small church in Youngsville, NC that has reassured me that there are still some local churches that are fighting the good fight. What this church has done in researching the corruption in Nigeria VOM is amazing and quite commendable.

I [recently] received the following email… 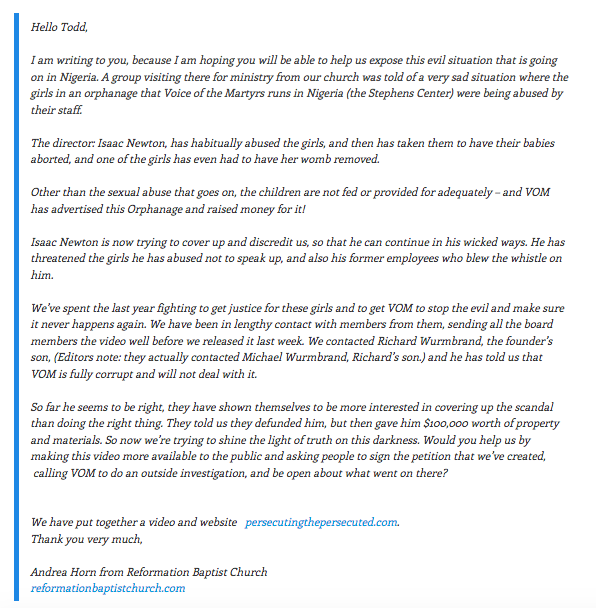 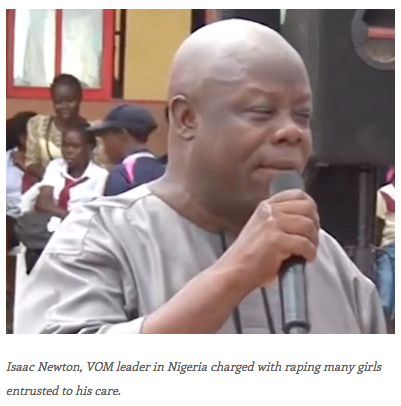 Prior to getting into the important issues that the Reformation Baptist Church has raised, I believe it would be helpful to review the Voice of the Martyrs (VOM) organization. 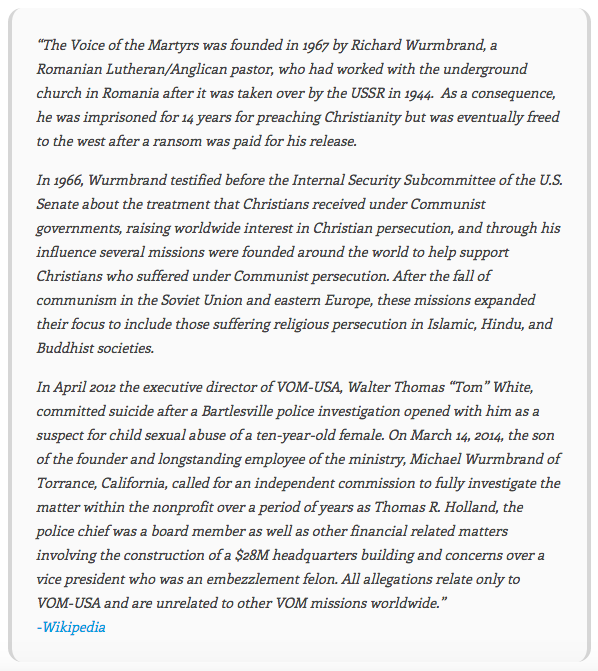 Below is an excerpt from an article on Tom White’s suicide, found in Christianity Today. 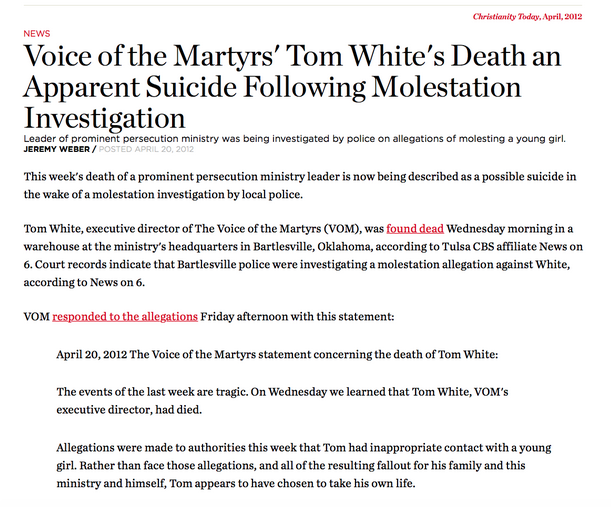 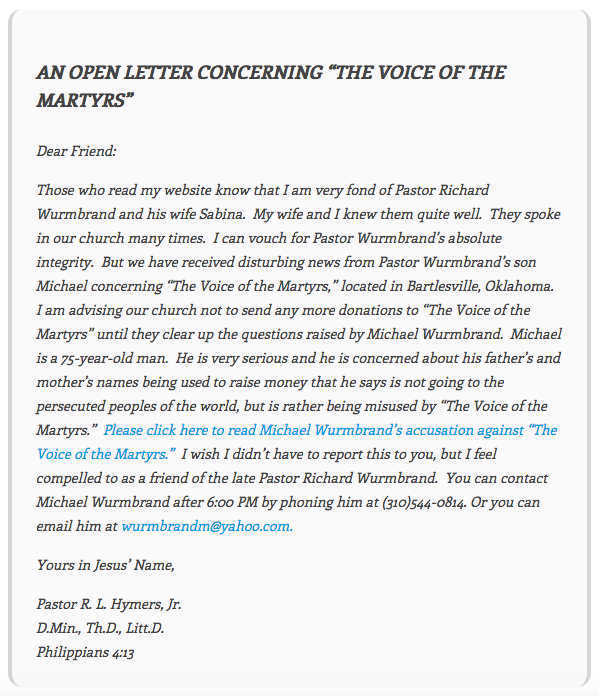 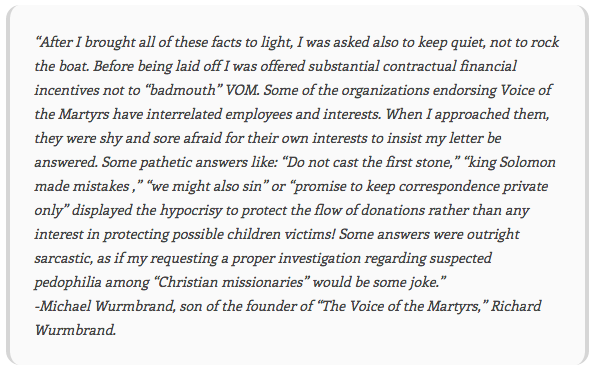 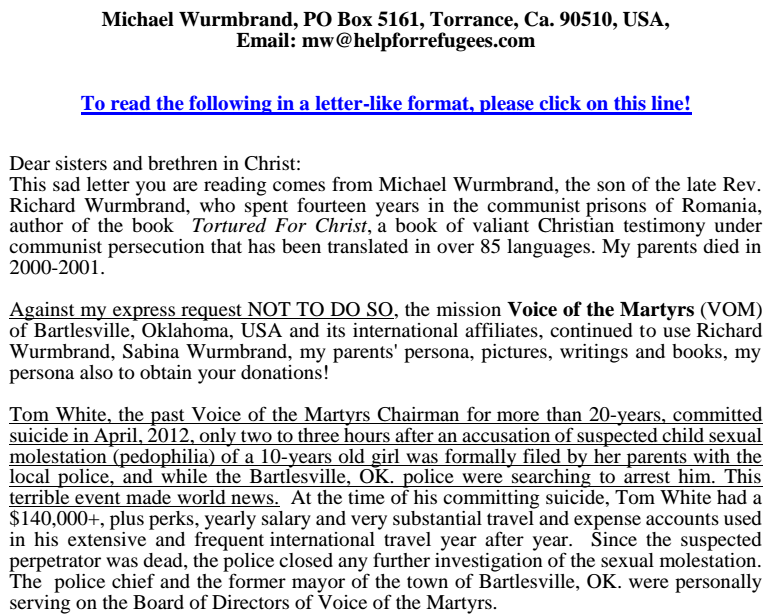 To read the entire letter written by Michael Wumbrand, click on this link.

The Reformation Baptist Church, through circumstances described in the video below, became aware of  gross mismanagement of funds in the Voice of Martyrs Nigeria. Most of the money came from Voice of Martyrs in America. In addition the church was also made aware of terrible abuse occurring at an orphanage in Abeokuta, Nigeria. This orphanage is called Stephen Centre and was run by Isaac Newton,  head man of VOM in Nigeria. 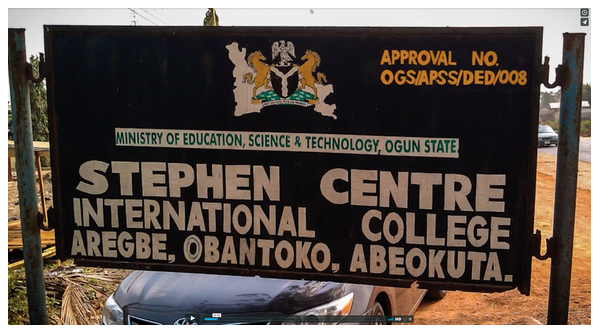 I would urge you to watch the video below.  It is about 45 minutes in length. The Reformation Baptist Church did an outstanding job of researching and producing this;  it will definitely awaken a righteous anger in you.  Once you have watched it you will want to sign the petition. I suggest you will also want to cease contributing to VOM.  As Michael Wurmbrand stated, they are fully corrupt. 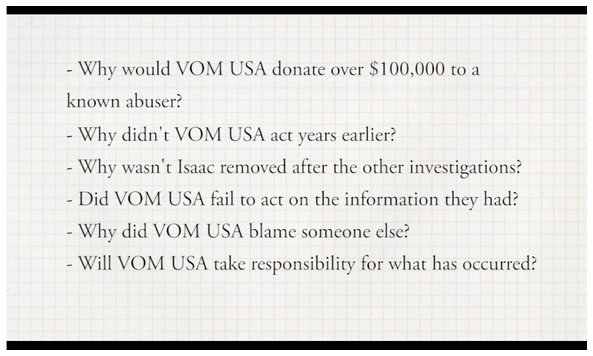 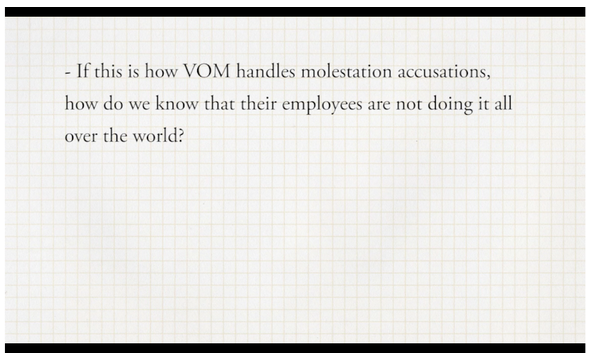 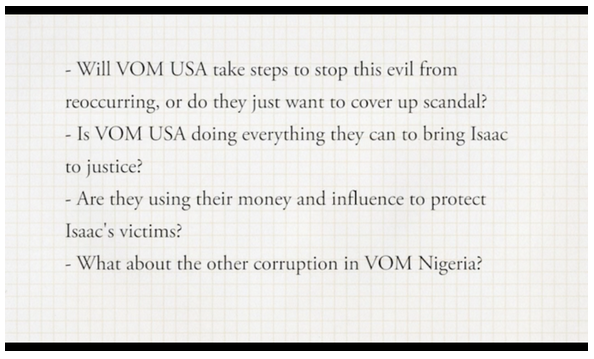 Todd Wilhelm believes the Voice of the Martyrs are attempting damage control in the wake of his explosive post.  To read this update, click here.