"Jokes mean something, maybe not to you, but certainly to the person who did not find them funny." link 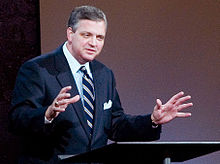 This morning, I was doing some reading in preparation for this post while listening to Rich Mullins greatest hits. I sure miss that guy! Any other fans out there? When I heard the song, If I Stand, I felt myself starting to cry.

I slowly began to figure out why. Until about 25 years ago, I thought that Christians, while sinners, didn't do the *big* sins. I never imagined respected Christians being caught in child sex abuse cover up, laughing about child sex abuse allegations, etc. The last 8 years have been an eye-opener for this naive Christian. Today, as I write about the T4G playgroup (more about that in a minute) along with reading about evangelical Dennis Hastert's predatory behavior (we will write about this next week), I find myself almost sick to my stomach. Add to that the sadness of caring for my terminally ill mother in law along with my handicapped parents, I find myself understanding more and more why we need the strength, love, grace and mercy of Jesus.

When I was 23 and doing child abuse follow-up in Salem, Massachusetts, I remember thinking that I was so glad I was a Christian since this could not happen in the church. Decades later, here I sit writing one more post excoriating the evangelical/Calvinista community for exhibiting despicable attitudes and actions that cause further pain to those who have been sexually abused within the church. The one thing the Calvinists have got right-there is a lot of depravity in this world and celebrity leaders are sure exhibiting it.

I just love it when a new face jumps into defending abuse victims. Here is a link to Mike Sloan's Twitter page. This is what it says about him.

Pastor, Trainer in Child Sexual Abuse Prevention, Longing for the church to remember it's old strength by protecting the vulnerable, M.Div. Covenant Sem.

He is a pastor with New City Presbyterian Church. A guy like this could almost convince me to believe 3 out of 5 Solas….almost! I will feature some of his tweet images today.

Why? Is it due to CJ's incessant kissing up to the big dogs? He calls Al Mohler "he smartest man on earth." Does Al Mohler really enjoy this fawning behavior? What does that say about him? Could there be another reason? Here is my favorite Mike Sloan image. 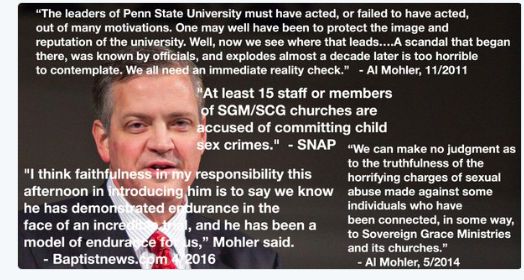 CJ Mahaney does not recognize, or perhaps ignores, the sin inherent in the system he created.

Al Mohler calls CJ *humble* in the audio below. But CJ Mahaney appears to love the attention of this group more than his friends or he would be really humble and step away, even if he believes he is innocent. He might even be willing to apologize and meet with the victims and their families. But he hasn't. Does his current persona match up with the quote below? Has he really taken responsibility?

However, he is one of the original four of T4G and we believe he has been very generous in helping this group get, and stay, on its feet. 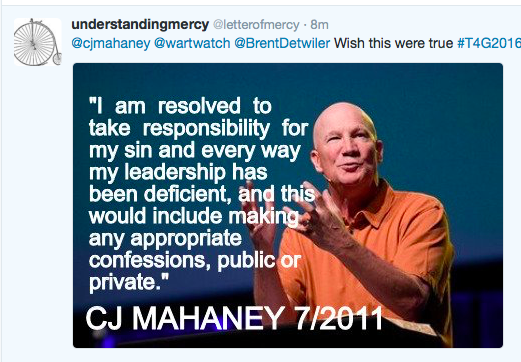 There is tremendous pain which is felt to this very day from the victims and their families.

I have had the chance to meet and talk with many of the families and victims. All of us remember what we felt on 9/11. Well, these families still feel the pain they experienced at the hands of a predator and a callous leadership and I believe them. Again from Mike Sloan: 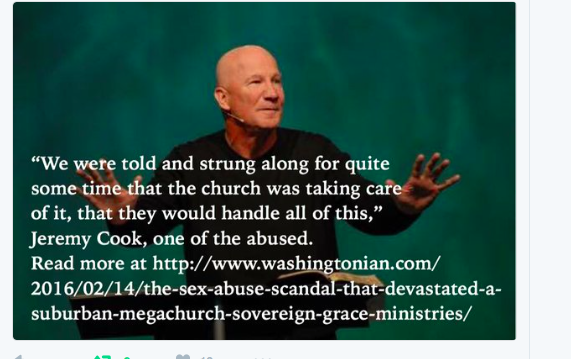 At T4G 2016, Al Mohler told a joke, apparently at the expense of the victims. Some of the men in the audience laugh along with him.

According to Al Mohler, his wife Mary refers to the 4 in T4G as Al's little playgroup.  It seems like the 4 boys are having lots of chuckles. In the audio below, you will hear Al joking about looking up CJ Mahaney on Google. Listen carefully and you will hear the laughs. Start listening at the 2:00 minute mark to hear the *joke*. However, it is worth listening to the section before this.

Now, for all the people who laughed along with Mohler's ill-advised and callous joke, we present some of the links that you will see if you Google CJ Mahaney's name.

Al Mohler offers no sympathy to those families who were victimized by the largest sex scandal in evangelical history in spite of knowing that some perps are in prison.

Imagine if you were a victim listening to Mohler as he then continues to joke about Mahaney's favorite sports teams. Mohler trivialized the entire SGM matter and that is downright shameful for a man in his position.The following pictures are from Mike Sloan. 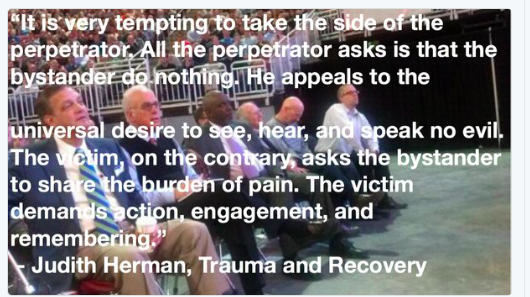 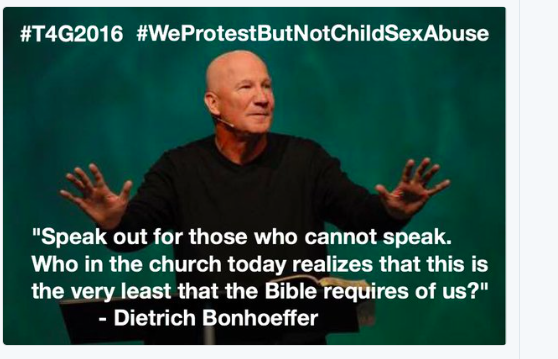 Does Al Mohler understand that he emboldens perpetrators by his coarse one-liner?

It is important to realize that SNAP was honored in the Best Picture of the Year-Spotlight. SNAP helped expose pedophile priests and is now helping to expose child sex abuse and cover up in the evangelical church. It would not be wise to dismiss their thoughts on the matter. I wonder if Al Mohler thinks this is a joke as well? 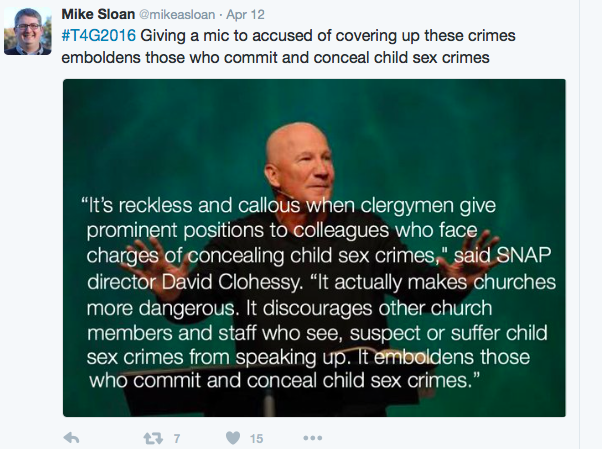 Al Mohler said he has never heard CJ say one unkind thing about anybody.

Well, I guess that settles it. CJ  is always kind. I wonder if Larry Tomczak feels that way. I bet Larry didn't give any money to SBTS so he probably doesn't matter.

However, one word Mohler forgot to mention in his gushing introduction of Mahaney is "generous".

Could CJ Mahaney's contributions to Al Mohler's SBTS, along with his fawning accolades, have played a part in Mohler's loyalty to Mahaney?

A few years ago Deb, who always follows the money, discovered that CJ Mahaney had given $100,000 to SBTS. In addition, SGM, which CJ ran as the former *Head Apostle*, also gave SBTS another $100,000. So Deb wrote $$$ THE MAHANEY MONEY MACHINE $$$, one of my favorite posts. Interestingly, these large donations were not disclosed to the SGM people in the pews who were eating oatmeal and increasing their giving because SGM *needed* it.

SGM was not a member of the SBC during this time. They also ran their own *seminary* called The Pastors College; yet were still giving money to SBTS. Think about it. When Mahaney took off to Louisville, he joined the SBC which I'm sure was happy to accept him since he was quite the generous donor to their flagship seminary. You can read about this in Brother CJ Mahaney: He’s Done Gone and Joined the Southern Baptists!

"And that boys and girls is how you get invited back!"

Immediately afterwards, there's that nauseating Mahaney chuckle. Do you think I'm kidding? Well, listen quickly since this recording will most likely disappear from the SBTS archive. But don't worry. We have made a recording.

If you listen to the beginning of Mahaney's talk, you will hear him describe Al Mohler as one of the greatest heroes of the faith and the smartest man ever! This is a typical CJ talk. He spends about 20% of his speaking time talking about how wonderful his buddy Al is, what a great athlete CJ is (he never played any sort of professional or collegiate sports since he never went to college) and talking about himself. This is considered thoughtful scholarship to present to seminary students? Good night!

WordPress is not allowing us to upload this file for "security reasons." If anyone out there knows how to get around this, please let us know. You will need to click either link to listen to it

This entire T4G *in your face* fiasco honoring Mahaney by letting him speak along with Al Mohler's joke leaves me cold. Thank God I can meditate on Jesus who would have put the victims and their families first. I bet he wouldn't have been one of the ones laughing at Moher's joke.

This Rich Mullins song is dedicated to the SGM victims and their families.

This Rich Mullins song is my prayer for all of us. May we leave love and a drop of grace wherever we go.