"For the sake of peace of the Church, CJ Mahaney should not speak at T4G or any conference until his name has been cleared…" 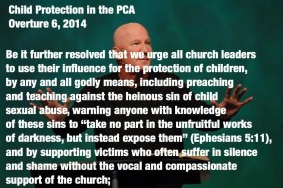 Please see an Update at the end of the post

Together for the Gospel 2016 got underway yesterday afternoon, and many of those filing into the KFC Yum! Center walked by a small group of protestors that was there to Stand with the SGM Victims.  Our friends Pam and Dominic Palmer drove all the way from Maryland to take part in the peaceful protest.  The group, comprised of 7 adults and 3 children, included a couple of representatives from SNAP. 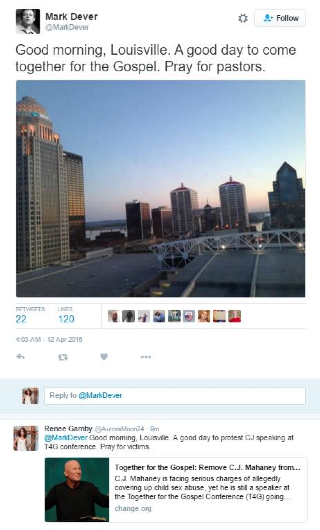 Most T4G attendees didn't pay any attention to the protesters; however, around 10 of them paused long enough to listen to the dissenters.  One of those standing with the SGM victims lifted his voice and said:  "We are protesting one of the main speakers. Do you want to know who?"  Some standing in line had no idea.  One woman in the crowd yelled: "It's all lies!" and two young guys chanted: "We love CJ, We love CJ" as they passed by.

During the two hour protest, the group passed out around 200 flyers.  Here is the exact information that was distributed.

Mahaney Knew or Should Have Known…

What are we protesting? We are protesting against C.J. Mahaney/Sovereign Grace leaders speaking at T4G16.

Why are we protesting? Mahaney, as Senior Pastor of Covenant Life Church and President of SGM/SGC & many SGC leaders are credibly accused of sexual abuse cover-up. Mahaney knew or should have known about a multitude of sexual abuse cases and cover-ups by his staff: