"Many things in life can make us feel overwhelmed… At this retreat, we will study Scripture and learn what it means to be overwhelmed with the presence of the Lord and how to focus on the Father rather than our circumstances."

Yesterday I discovered that a women's retreat is being held this weekend at a facility owned and operated by the Baptist State Convention of North Carolina called the Caraway Conference Center and Camp (or Camp Caraway).  As a female Southern Baptist who lives in North Carolina, I was curious to learn about this retreat, which I missed the opportunity to attend.

Here is a description of the retreat which I found on the N.C. Baptist website (see screen shot).

Who doesn't feel overwhelmed right now?  So far this retreat sounded rather appealing!  My very next thought was – what is the name of the gifted speaker who will teach attendees to focus on things above rather than their circumstances?

I scrolled down the page and saw this (see screen shot). 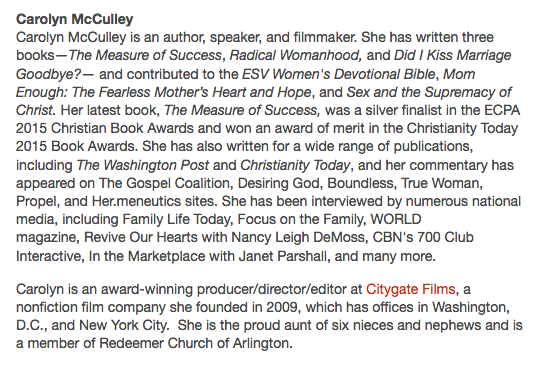 Carolyn McCulley?  Now that's a name we have known the entire time we have been blogging.  How did we first learn about her?  Well, back when we were doing extensive research on Sovereign Grace Ministries (SGM), we learned that Carolyn worked for SGM and was a member of the church co-founded by C.J. Mahaney – Covenant Life Church (CLC).  The following screen shot confirms this.

The book McCulley references in her bio, Sex and the Supremacy of Christ, was published on June 1, 2005, and includes this description of McCulley's position at SGM.

On June 25, 2007, Revive Our Hearts featured an interview with Carolyn McCulley, who was in her 40s at the time.  It was fascinating to discover how she first met C.J. Mahaney.  She had traveled to South Africa to visit her sister and brother-in-law who were living there at the time, and it was in Capetown that she first heard Mahaney speak.  Here is an excerpt from that interview.

Carolyn McCulley joined the Sovereign Grace church in Richmond, Virginia, and sometime later she moved her membership to Covenant Life Church.  Mahaney pastored there until the latter part of 2004 and then headed up Sovereign Grace Ministries, which was headquartered inside CLC.

This is what greatly concerns us about Carolyn McCulley — she planned to follow Mahaney as he followed Christ.  Not only that, the people in churches affiliated with Sovereign Grace Ministries discipled her and changed her life.  Knowing what we now know about Mahaney, SGM, CLC, etc. this is a HUGE concern.  In the years since this Revive Our Hearts interview took place, we have discovered that shepherding was heavily used in SGM.  Not only that, sin-sniffing was alleged to have taken place in 'care groups'.  Carolyn McCulley's former employer (SGM) had so many problems that there is a ton of information about it on the internet.  Here is an eye-opening article that appeared in The Washingtonian earlier this year.

The Sex-Abuse Scandal That Devastated a Suburban Megachurch

Perhaps this is why Carolyn doesn't mention anything about Covenant Life Church or Sovereign Grace Ministries in her bio.

Given the fact that Carolyn McCulley was heavily influenced by Mahaney and other pastors in SGM, we are greatly concerned about how she is influencing others – in this case Baptist women from North Carolina.  Do they even know about her background with Sovereign Grace Ministries since it is NEVER mentioned in her bio?

We used to follow Carolyn's blog and will never forget her post where she announced she was leaving her church (Covenant Life Church).  She made it sound so dramatic!  Then she revealed that she was leaving to help plant a church in Arlington, Virginia.  It appears she is still at that church, which used to be a part of Sovereign Grace Ministries.  After the chaos that occurred in 2011-12, Carolyn McCulley's church disassociated with SGM (see Brent Detwiler's info).  According to the church website, they now partner with the Acts 29 Network and SendDC.

Based on what we know about Carolyn McCulley's involvement with C.J. Mahaney and Sovereign Grace churches, we are truly underwhelmed by her leadership at the Overwhelmed retreat.  How tragic that North Carolina Baptists have to go outside their denomination to look for an inspiring female speaker.  Aren't there millions of women in the SBC?  Where are the female leaders?

There are two female worship leaders at this event who are both Baptists – Cindy Johnson and Kimberly Merida.  I do not know anything about Cindy or Kimberly, but I have heard of Kimberly's husband Tony Merida, who pastors a church in Raleigh.  Almost seven months ago C.J. Mahaney came to Raleigh and spoke at Merida's church, Imago Dei.  We wrote about it here.

If you are overwhelmed by life, rest assured you don't have to spend $$$ for a two-day retreat to become overwhelmed by our Lord and Savior Jesus Christ.  All we need to do is continually look beyond our circumstances to see His magnificence!