"The matter of the place of women in the home, in society, and in the church is not an issue that can be conclusively determined by a few apparently restrictive passages that are often advanced by those who think that subordination represents God's will for women." 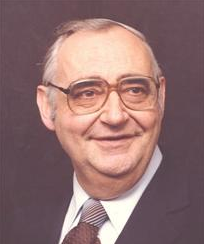 Our previous post – Jason Duesing on ‘Gentlemen Theologians’ Who Would Have Handled the ESS Debate with ‘Civility and Kindness’ (link) – garnered quite a few comments.  One of the early comments really caught my attention.  See screen shot below.

Oh the irony that the 'gentleman theologian' Jason Duesing held up as one to be emulated — Dr. Robert Nicole — was an EGALITARIAN!!! How much do you know about Dr. Nicole?  I have to admit that my knowledge of this 'gentleman theologian' is limited, so I thought it might be beneficial to learn more about him.

According to a Wiki article, Robert Nicole was born in Germany in 1915 to Swiss parents.  The Nicole family returned to Switzerland during Roger's childhood, and he remained there until 1935.   Dr. Nicole was a Bible scholar with the following degrees:

Nicole began his theological career at Gordon Divinity School [now Gordon-Conwell Theological Seminary] in 1944 as a faculty member.  Two years later he married Annette Cyr.  He was appointed professor of theology in 1949 and spent most of his career there, retiring in 1986.  He continued teaching theology during his retirement at Reformed Theological Seminary in Orlando, Florida.

The Theopedia article on Roger Nicole identifies him as a Baptist and states:

Dr. Nicole is regarded as one of the preeminent theologians in America. He was an associate editor for the New Geneva Study Bible and assisted in the translation of the NIV Bible. He is a past president and founding member of the Evangelical Theological Society, and a founding member of the International Council on Biblical Inerrancy. He has written over one hundred articles and contributed to more than fifty books and reference works.

Dr. Nicole was "an acknowledged expert in the thought of Reformation leader John Calvin", according to David Bailey who wrote Speaking the Truth in Love:  The Life and Legacy of Roger Nicole.  He passed away on December 11, 2010 (two years after the death of his beloved wife Annette).  You can access his obituary here.  J.I. Packer's tribute to Nicole was as follows:

"Awesome for brain power, learning and wisdom, endlessly patient and courteous in his gentle geniality, and beloved by a multitude as pastor, mentor and friend."

What a shame that this 'gentleman theologian' didn't have more of an influence on those who would go on to coin the term "complementarianism" just a year after his retirement from Gordon-Conwell.  And they would do it secretly in Danvers, Massachusetts, which is in close proximity to the institution where Dr. Nicole taught for 42 years!

I wanted to learn more about Dr. Nicole's theological beliefs and came across an article he wrote entitled: "Biblical Egalitarianism and Inerrancy of Scripture", which is published on the Christians for Biblical Equality website.  Dr. Nicole's article begins with this:

Since biblical egalitarianism is still viewed by many as inconsistent with biblical inerrancy, it is desirable to state in a very brief manner my position on this subject. The matter of the place of women in the home, in society, and in the church is not an issue that can be conclusively determined by a few apparently restrictive passages that are often advanced by those who think that subordination represents God's will for women.

Dr. Nicole goes on to state:

The oppression of women as “the weaker sex” has been over the ages a notable feature of human history, thus fulfilling and amplifying the divine prophecy of Genesis 3:16.

What in the world would Roger Nicole have thought of the recent reinterpretation of Genesis 3:16 by the ESV 'scholars'?

Please take the time to read through Nicole's entire article, which ends with this profound conclusion:

Inasmuch as the view outlined here has not achieved an almost universal recognition among evangelicals, as the inappropriateness of slavery has achieved since the nineteenth century, it is paramount that all evangelicals should strive to provide, particularly in the church, opportunities for our sisters to exercise the gifts of the Spirit that they have received, even where it is not thought permissible by Scripture for the office of pastor or teacher.  Thus, the church would not lose the benefits that God's gifts were intended to provide, nor would our sisters be compelled to hide their light under a bowl. (Matt. 5:15)

Given Dr. Nicole's position on women being free to exercise their spiritual gifts, it was quite shocking that Jason Duesing would have so much admiration for Roger Nicole and conclude his post with this question:

"Where are the Gentlemen Theologians who will lead us with care, civility, and kindness amid the chaos?"

As we approach the 30th anniversary of the crafting of the Danvers Statement, we can't help but wonder how differently the conservative corner of Christendom would be if the theological interpretations of Dr. Nicole had been implemented instead of those of Wayne Grudem, John PIper, et al. Thoughts?