"I can't help but wonder that if those convinced of their brother's heterodoxy were slow to speak and sought to earn the right to criticize in private, much of the negative impact of this debate could have been avoided." 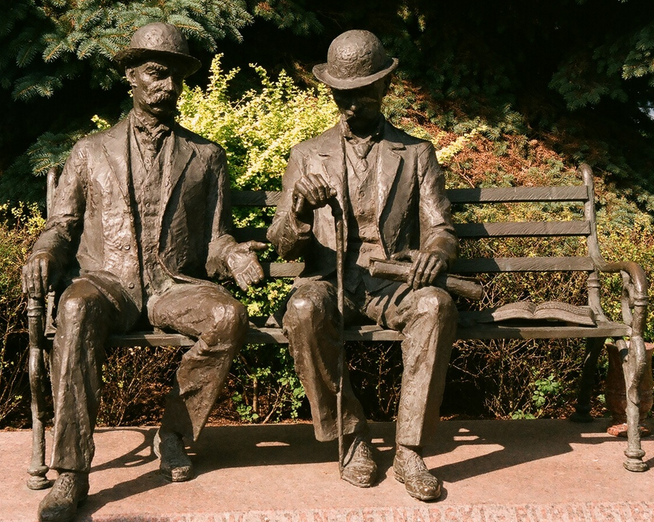 Gentlemen on a Bench

The countdown is on…  In less than 40 days, the Evangelical Theological Society will assemble in San Antonio for its Annual Meeting.  And this year's theme – The Trinity –  is already sparking controversy.  Here is how the Letter from the Program Chair Sam Storms begins (see screen shot from page 4).

On Tuesday, November 15 (the first day of the meeting), Wayne Grudem will making the following presentation (see screen shot from page 28 of ETS program).

That is background information for the remainder of the post.  A few days ago, Jason Duesing, who will be participating in the upcoming ETS meeting in several capacities, wrote a post entitled Where are the Gentlemen Theologians?  I found his nostalgic commentary quite interesting.  He reminisced about a time when he was an aspiring-but-not-yet PhD student.  He and a classmate traveled to Colorado Springs to attend their first ETS Meeting.  In his post, Duesing revealed the following:

He went on to describe the 'gentlemanly' mannerisms of a great theologian named Roger Nicole, whom he observed at breakfast one morning during the ETS gathering.  Duesing then shared the following:

When a pastor friend of mine would later give me a copy of Roger Nicole’s essay, “Polemic Theology: How to Deal with Those Who Differ from Us,” I took notice, recalling that breakfast experience. How fitting it was for a scholar of his stature to write a piece like this, for I had seen a glimpse of how he might model care for another’s words and thoughts in the same gentlemanly fashion his colleague cared for a stranger’s abandoned breakfast. This, I suspected, was a Gentlemen Theologian, and as I have read and learned more, the testimony of Roger Nicole is that he was representative of a generation of such scholars.

Observing evangelicals debate the doctrine of the Trinity over the last few months, I’ve thought about that breakfast room and the essay on polemic theology and wondered what would Roger Nicole think? 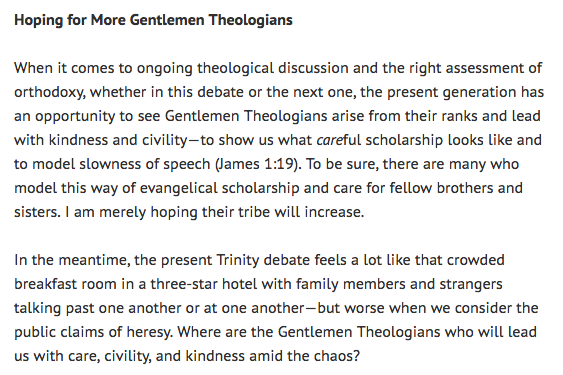 We have seen this strategy before…  Jason Duesing is Al Mohler's mouthpiece, plain and simple.  Our next step was to do a little research on Duesing.  Where have we seen his name before?  Here is his faculty profile:

Jason Duesing serves as the academic Provost and Associate Professor of Historical Theology at Midwestern Baptist Theological Seminary [emphasis mine]. He came to MBTS after serving for more than a decade on the administrative leadership team and faculty at Southwestern Baptist Theological Seminary in Fort Worth, Texas. His various roles at SWBTS included assistant to the president, chief of staff in the office of the president, and most recently, vice president for strategic initiatives. Duesing also served as Southwestern Seminary’s acting provost during the 2011-12 academic year. In the classroom, he was assistant professor of Historical Theology. Duesing earned his Ph.D. in Historical Theology and Baptist Studies from Southwestern Seminary in 2008. He also holds a M.Div. from Southeastern Seminary and a B.A. in Speech Communications from Texas A&M University in College Station.

Duesing serves as a research fellow for the Ethics and Religious Liberty Commission of the Southern Baptist Convention, on the board of directors for the Council on Biblical Manhood and Womanhood, editor of the Journal for Biblical Manhood and Womanhood [emphasis mine], academic editor of the Midwestern Journal of Theology, and general editor for For the Church resources. He is also a member of the Evangelical Theological Society and regular contributor to Baptist Press.

So there you have it.  Duesing is earning his loyalty badge as a faculty member of the latest Southern Baptist seminary to be taken over by the Neo-Cals.  Can there be any doubt that he will really be going places with his career?

Earlier today Todd Pruitt over at Mortification of Spin wrote a response entitled What is a gentleman to do?  OR I agree with Wayne Grudem since it is pretty obvious whom Duesing was calling out.

Referring back to his post Where are the Gentlemen Theologians? Duesing wrote:

If we consider someone a brother in Christ, and come to think what they’ve written or said denies a major standard of Christian orthodoxy, then, in the spirit of civil kindness, I think first a face-to-face meeting or phone call is advisable instead of a citation of condemnation in one’s public musings.

We can't help but wonder whether Jason Duesing placed a phone call to either Todd Pruitt or Carl Trueman before publishing this post for everyone to see.  Sorry Aimee,  GENTLEMEN ONLY!  🙁

We found it interesting that Pruitt's alma mater is Midwestern Baptist Theological Seminary.  Todd went on to write:

Of keen interest to us is that Dr. Duesing draws a direct line between the call to be gentlemen theologians and the current controversy over the doctrine of the Trinity (If you need to, you can catch up HERE).

Then Todd Pruitt gets to the heart of the matter (see screen shot below). 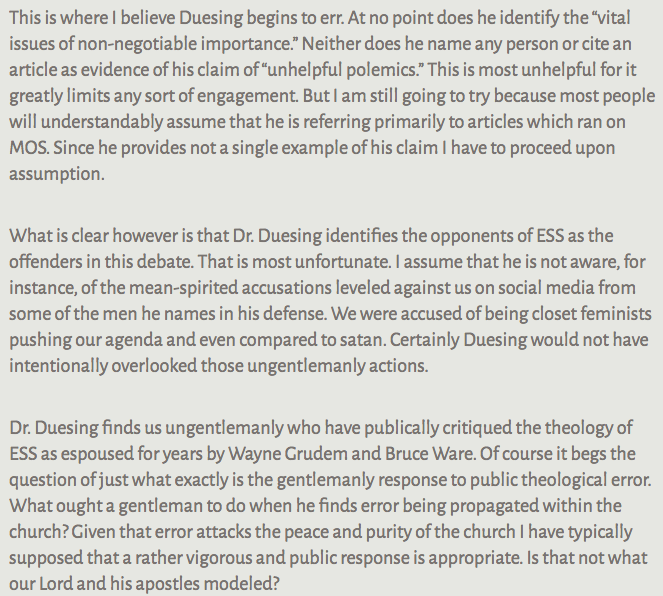 We want to encourage you to read all of Todd Pruitt's post.  He concludes with this:

So I agree with Wayne Grudem. Someone is indeed threatening the Bible and the Trinity. And it is a good thing that there are men who are willing to enter the fray allowing others go about more gentlemanly duties.

The upcoming ETS meeting was also the focus of a recent Patheos post entitled The Layperson and ETS penned by Michelle Van Loon (a mere 'woman'). We believe the most important point in her post was the following true statement:

Getting back to Jason Duesing's 'gentlemen theologians' post, we wonder what would have happened if Martin Luther had sought to meet Pope Leo X face-to-face instead of sending his 95 Theses to Archbishop Albrecht of Mainz and Magdeburg and then nailing them to the church door in Wittenberg (as legend has it).  Definitely food for thought…

We will keep you posted on any further developments regarding ESS, ETS, etc.

The following clip is dedicated to the MoS folks who dared to challenge those with whom they disagree.