In addition, this document further proves knowledge of Chantry’s crimes by Earl Blackburn, the most powerful leader in ARBCA over the past 20 years.  He has been at the center of the cover-up.  He is the senior pastor of Heritage Baptist Church in Shreveport,  Louisiana.  He should be removed from ministry.  His church should also be removed from the Southern Baptist Convention unless there is radical change.

Blackburn has adamantly stated he had no knowledge of any allegations of child abuse against Chantry. It is a blatant lie. He knew everything and had all the incriminating evidence from Lindblad.
-Brent Detwiler, “Don Lindblad’s Recently Discovered Review of Informal Council Investigation for Chairman Earl Blackburn Proves Intentional Cover-Up of Tom Chantry’s Crimes by Marcus “Mike” McKnight, Tedd Tripp and Rich Jensen.” 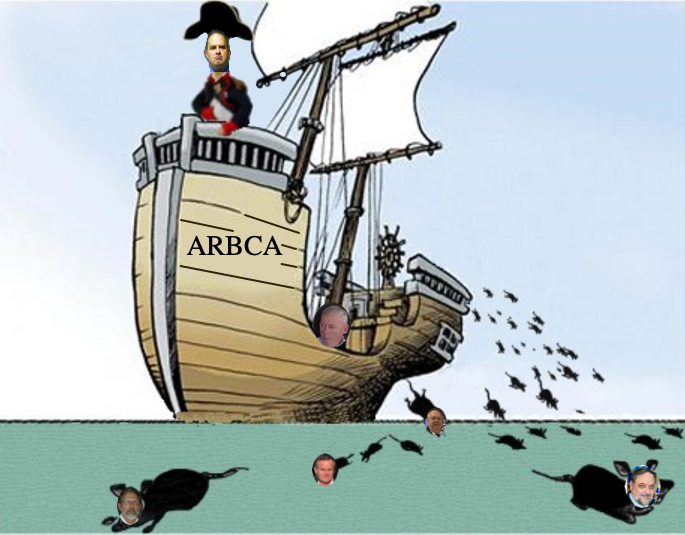 After former ARBCA pastor Tom Chantry’s two trials many of the men who were allegedly involved in the coverup of Chantry’s crimes retired, pulled their church out of ARBCA, or removed their church website from the internet.  I won’t speculate on the reasons for their actions.

ARBCA’s (The Association of Reformed Baptist Churches of America) membership dropped from a high of 85 churches to about 11 churches. ARBCA recently changed their name to “Confessional Baptist Association” (CBA) and I will speculate on the reason for that – so potential new members who visit one of their churches and then goes home and Googles “ARBCA” won’t read all the stories of their horid past.

Earl Blackburn, one of the top leaders in ARBCA for many years, decided to retire in 2019 (see my post on Blackburn’s retirement here.) He returned to North Carolina, the state he was born and raised in.

It seems to me that ol’ Earl just isn’t happy unless he occupies a position of authority, so he ran for a seat on the Elkin, NC School Board.

After the election I checked out the Elkin Tribune and regrettably, I must inform you that Blackburn was elected. I left a comment on the article concerning Blackburn’s victory and shortly thereafter someone anonymously replied to my comment.

Obviously I cannot say who left the comment, but I can say that I received numerous anonymous emails while covering the Chantry trials, accusing me of lying and breaking several of the Ten Commandments. Were I to guess I’d say these were from ARBCA leaders. Nameless and spineless is their M.O.

I checked back a few days ago and “libel inc” edited his comment. Perhaps a certain someone is getting some questions from the good people of Elkin?  I’m accused of being a liar, but there is nothing to back up the accusation by “libel inc.”  In my opinion, ARBCA leaders were a pack of lying thugs. This reminds me of what Judge Astrowsky said during the first Chantry trial:

“Throughout the trial, the Association of Reformed Baptist Churches investigation into Chantry’s misconduct was mentioned. During that investigation more than 20 years ago, nothing was reported to the police. Tuesday, Judge Astrowsky warned both counselors to not derail too much into ARBCA as they are not being tried in this case. ‘If this were a trial of ARBCA, they’d be convicted,’ he said. ‘But that’s not what this trial is about.”
-Verde News, August 18, 2018 (Page no longer available, but quote may be found here.)

Below is a screenshot of the updated comment by “libel inc.” Again, there is no proof of me lying, just groundless character assassination with an appeal to North Carolinian’s mental prowess. (I will say that most North Carolinians are likely not as easily duped as the majority of ARBCA members were, but their votes were cast with no idea of Blackburn’s past.) 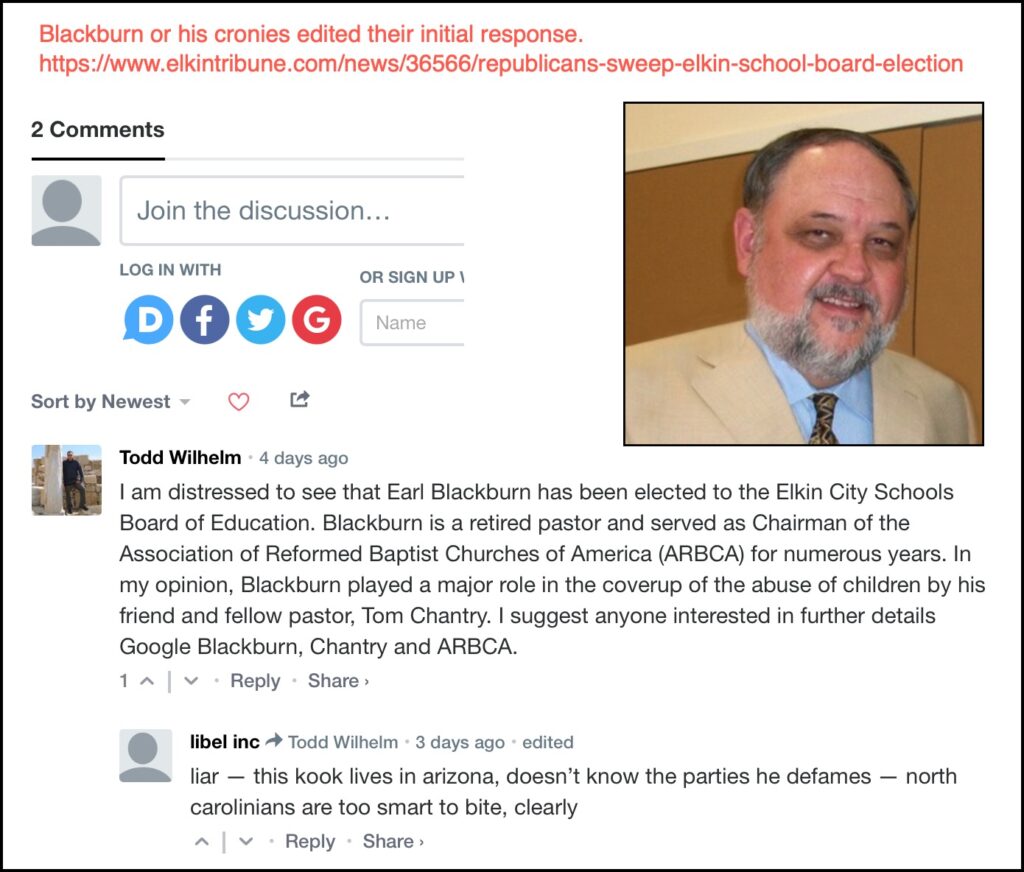 A woman whose acquaintance I made while covering the trials of former ARBCA pastor Tom Chantry has a blog called “Ephesians 5:11.” It is an excellent compilation of many documents pertaining to the trials. Below, in her words, is the purpose of her blog:

I’m a former member of two ARBCA member churches whose desire is to uphold the 9th commandment by promoting truth. My blog is intended to be a reference for those who are seeking truth regarding ARBCA and Tom Chantry. I pray it will be helpful, especially to members of current and former ARBCA member churches.

Again, to quote Brent Detwiler, “Earl Blackburn [was] the most powerful leader in ARBCA over the past 20 years.  He has been at the center of the cover-up [in the Tom Chantry case].

Cheryl, in her Ephesians 5:11 blog has done an excellent job of compiling the facts of Blackburn’s involvement in the Chantry case. You can access her truthful information on Blackburn here.

That’s not all, Corey Smith, the youngster who took over Blackburn’s job after he retired, demonstrates his lack of discernment by featuring Blackburn in a conference for young adults! I wonder how much cash Blackburn will be paid for this? 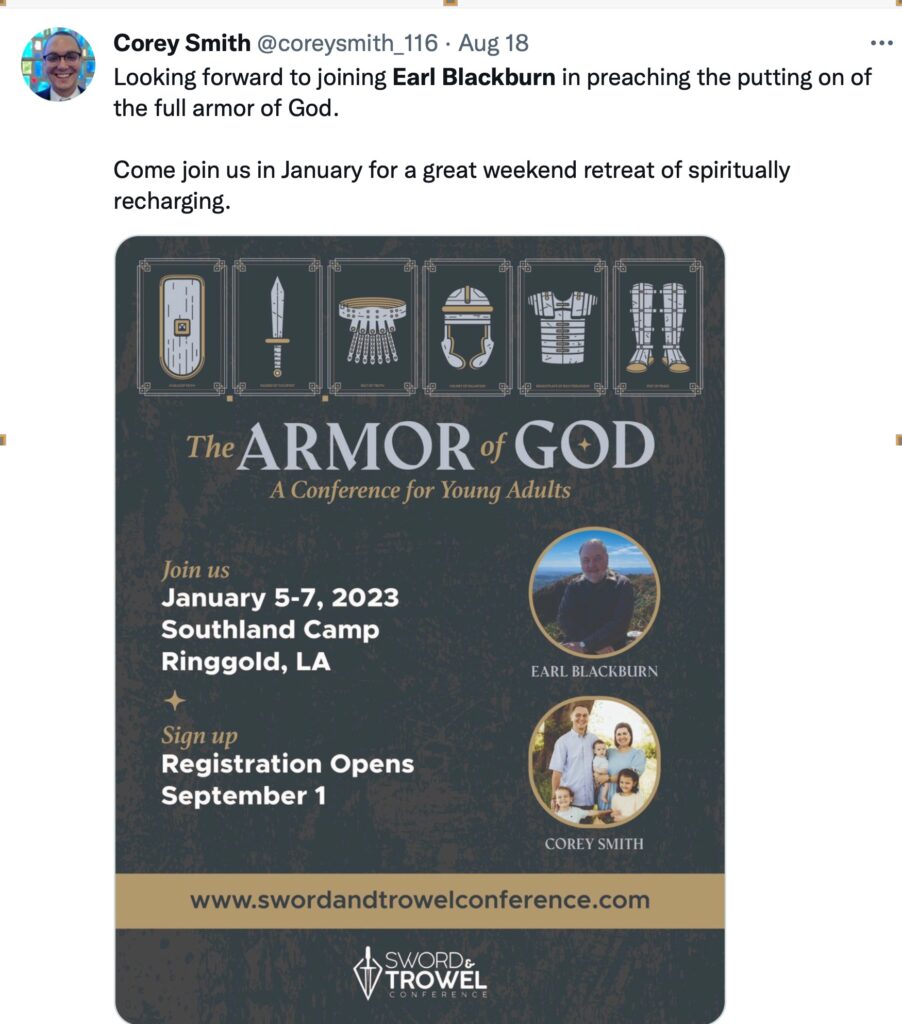