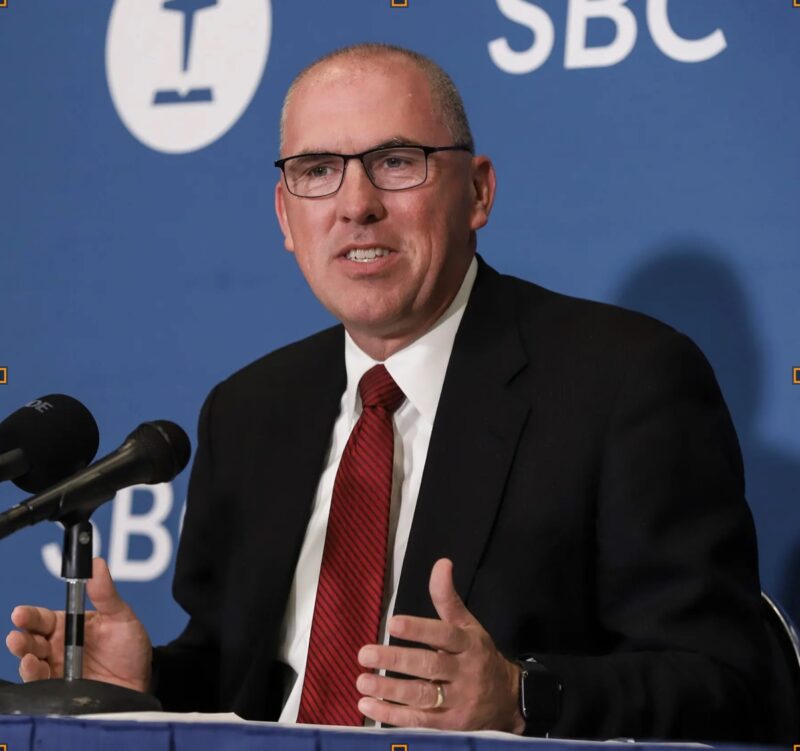 You may recall that 5 weeks ago it was reported that the US Department of Justice is investigating the Southern Baptist Convention for possible crimes. This was spurred on in part because of the SBC report on the coverup of sexual abuse among leaders in the denomination.

I have, what is, in my opinion some stunning news on what I believe to be the continuing coverup of sexual abuse within SBC churches. More on that in just a minute. 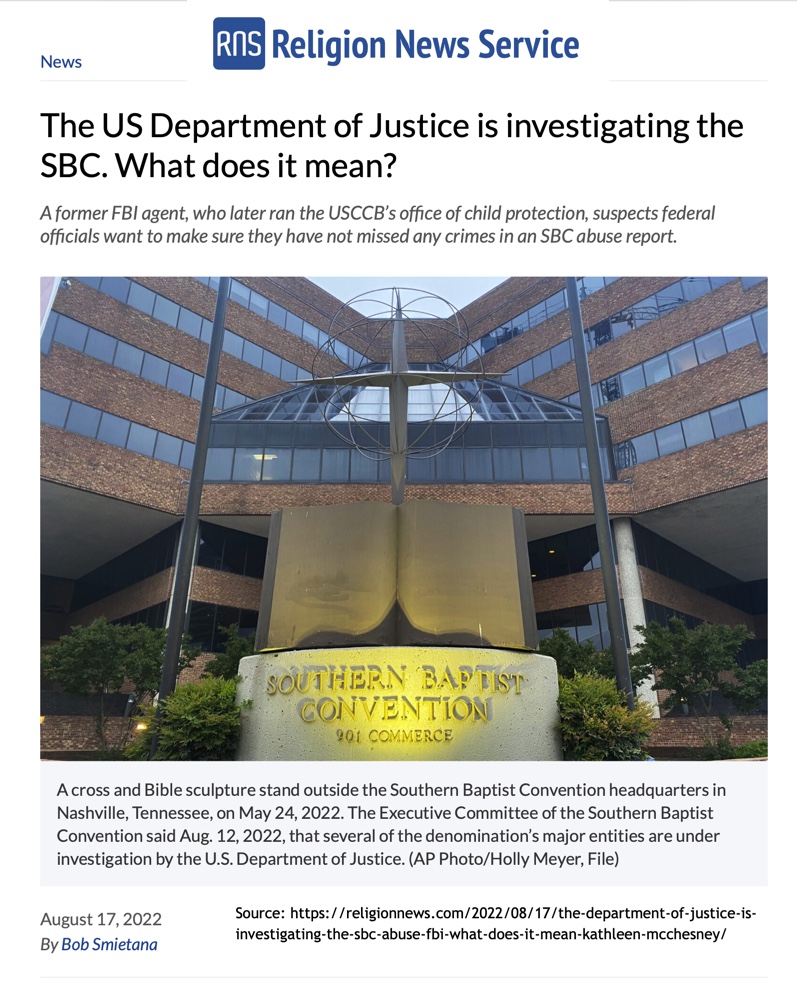 First I would like to give you a brief recent history of the SBC’s actions regarding sexual abuse and the coverup of abuse within their denomination. You may recall that in 2019 then SBC President J.D. Greear called for “sweeping changes to prevent sexual abuse.”  He even shed some tears to show how deeply he felt about this issue. 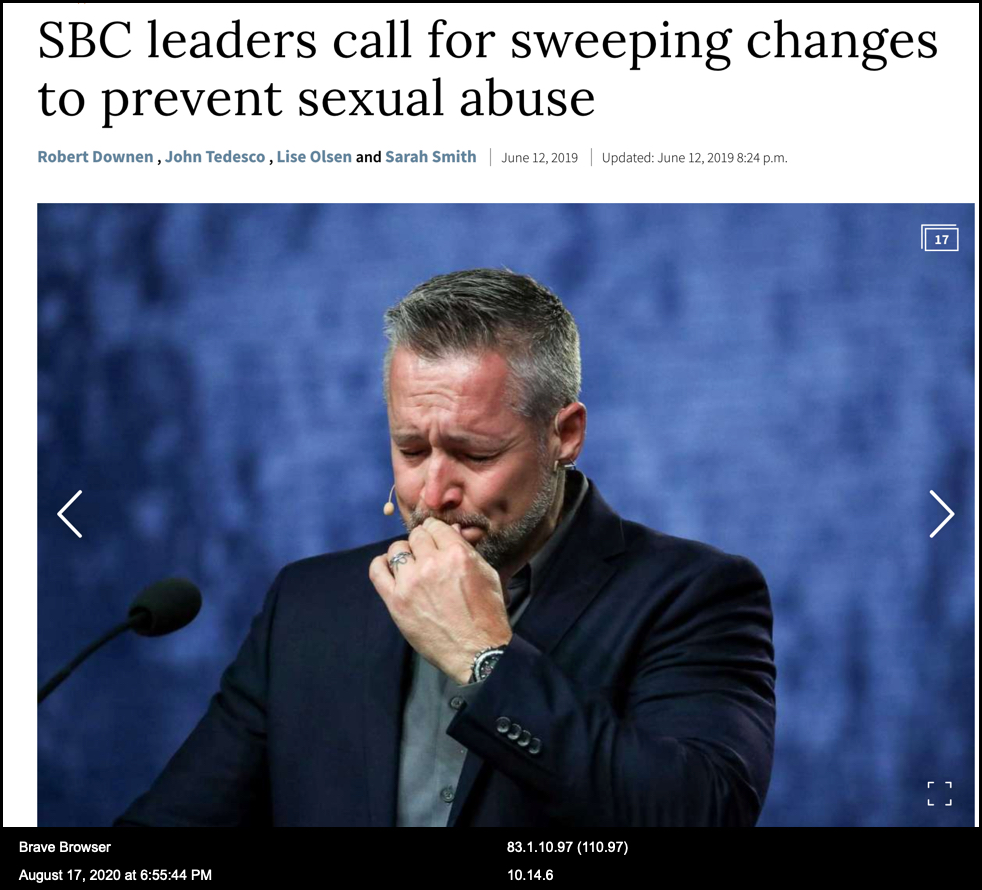 Below is a portion of Greear’s speech which he delivered at the SBC convention in 2019. You will notice that he specifically called out what he believed were ten particularly problematic churches that he wanted a work group to examine to see whether theses churches measured up to the SBC standards regarding sexual abuse. 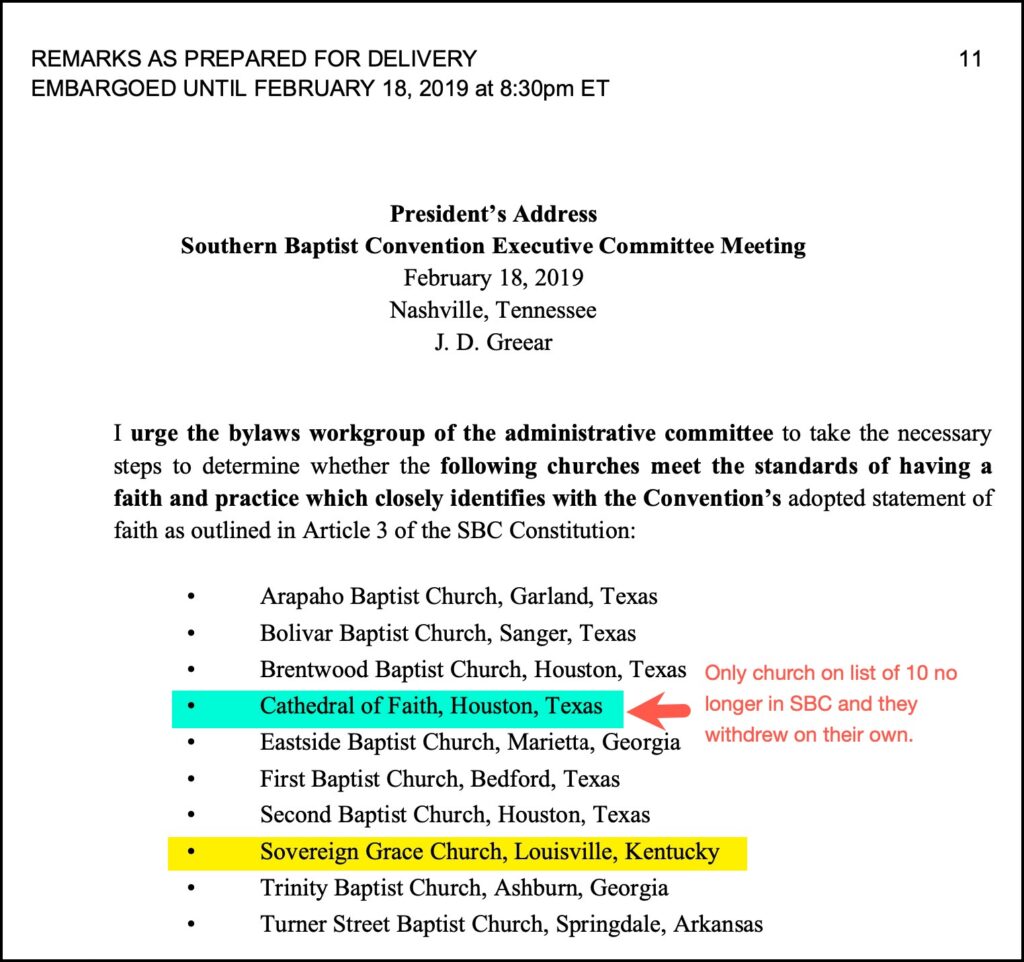 Of these ten churches, only one has been judged to not meet standards.  That church, Cathedral of Faith, withdrew from the SBC in February 2019 due to negative exposure received in a series of articles published in the Houston Chronicles and San Antonio Express-News. About one year after the Cathedral of Faith withdrew the SBC said they should be dis-fellowshipped! 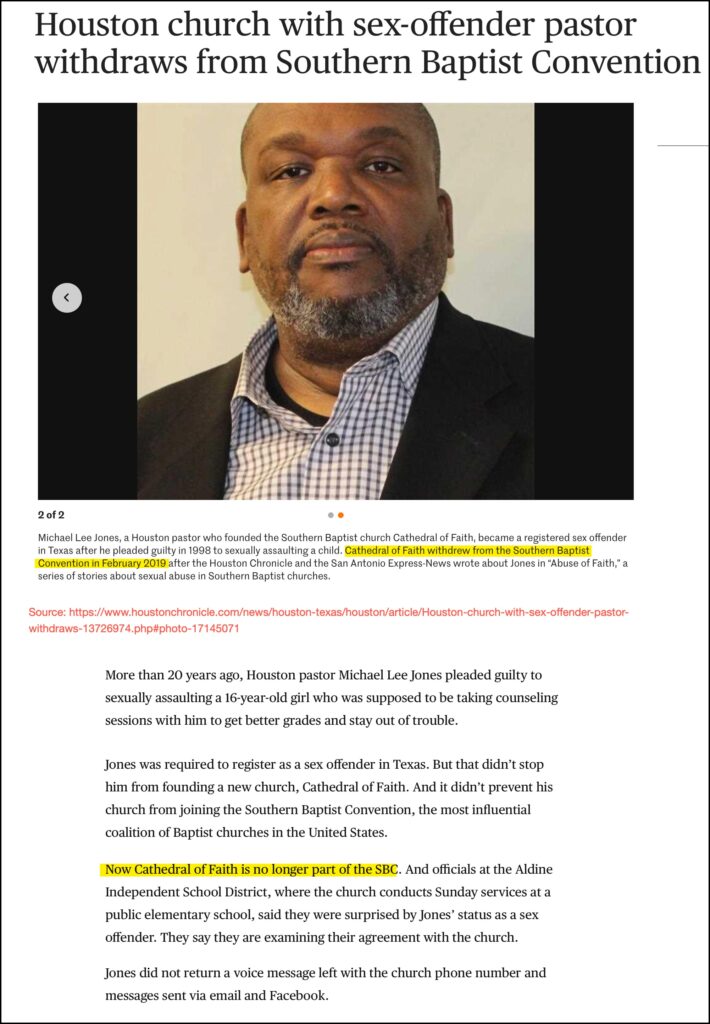 To date there has been only one church of the ten that the jury was still out on – that church being Sovereign Grace Church of Louisville, KY.  The Senior Pastor of that church is C.J. Mahaney.  Also on staff is Bob Kauflin, the well known music-man from Sovereign Grace.

Today I received news from a trusted source (who shall remain anonymous) that the SBC Credentials Committee “believes Sovereign Grace Church of Louisville is in friendly cooperation with the Southern Baptist beliefs about sexual abuse.”

I was not shocked, but I was very disappointed in the decision made by the Credentials Committee. It is my belief that this decision seriously undermines any hope sexual abuse survivors and their supporters had for the SBC to seriously deal with this gross sin within their ranks.

After all, who can forget the landmark article authored by Tiffany Stanley and published in the Washingtonian concerning the sexual abuse and coverup within the denomination led by C.J. Mahaney? 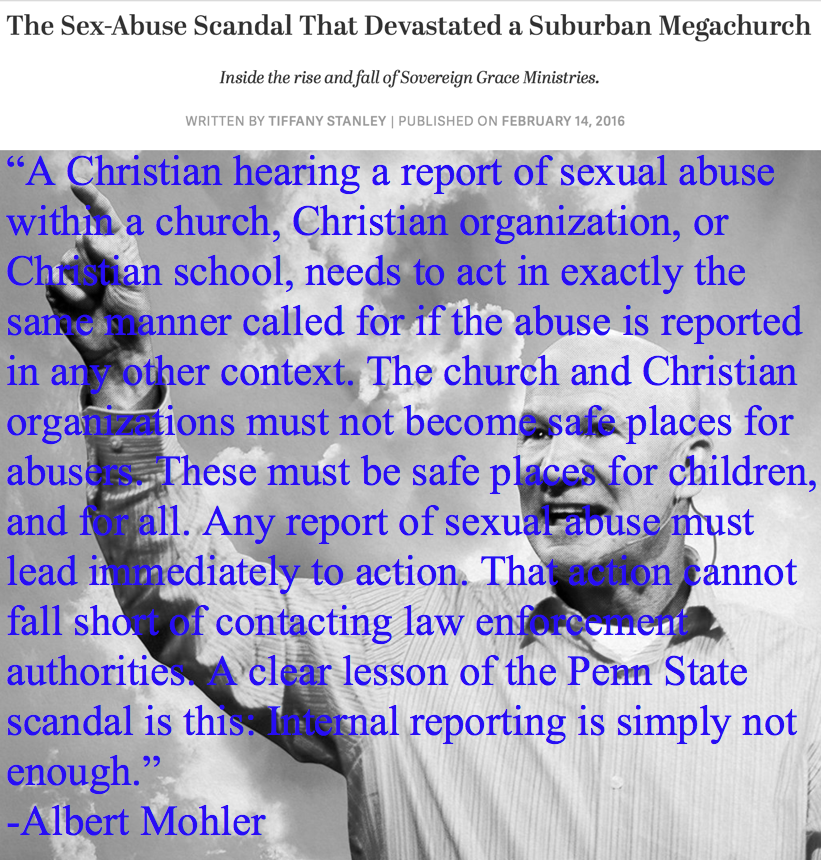 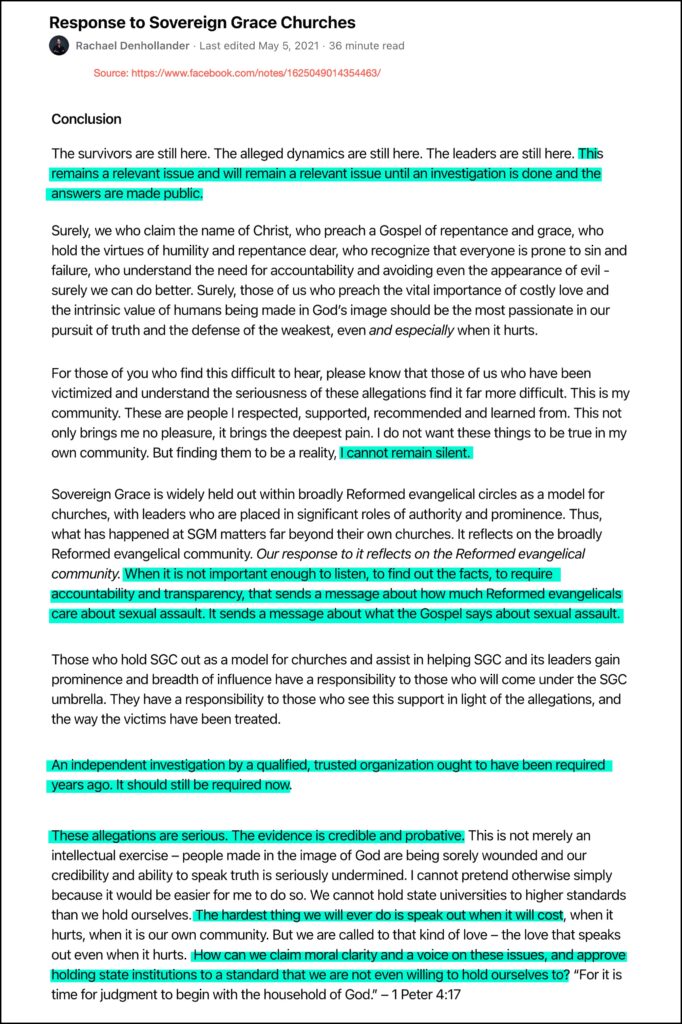 At the last SBC gathering they elected Bart Barber to the presidency of their denomination. Barber has made some recommendations with the hope that sexual abuse will be dealt with in his denomination.

One thing Barber did was establish the Abuse Reform Implementation Task Force (ARITF). This task force “retained Rachael Denhollander, an attorney specializing in sexual abuse dynamics.” Retained means the SBC is paying Rachael.  In my opinion Rachael needs to speak up once again for the survivors of sexual abuse suffered while attending Sovereign Grace Churches. The SBC has shown their true colors concerning sexual abuse (in case you had any doubts). I call on Rachael Denhollander to tell the SBC she can no longer work for them. To continue to work for the SBC is, in my opinion, to accept blood money.