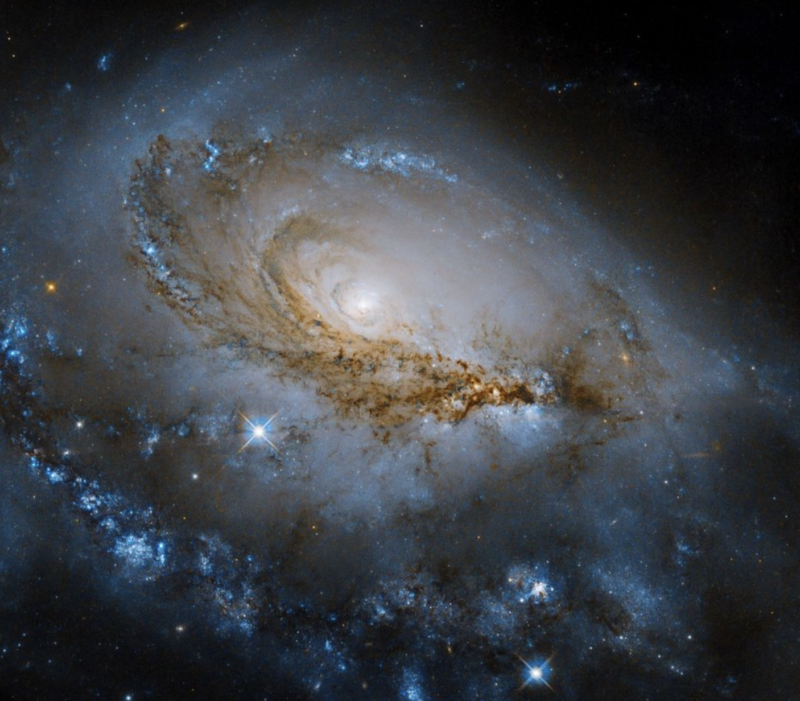 “It matters enormously if I alienate anyone from the truth.” –C. S. Lewis

On May 4, 2022, I wrote the following post:  Trinity Christian Chapel and the Christian and Missionary Alliance’s Slow Response to Sexual Harassment Allegations Against Pastor Jim Ammerman.

The elders then discussed candidate Jim Ammerman but felt he was not a fit for TCC and went back to the C&MA requesting more candidates. The ADS told them that Ammerman was their only option and for the elders to “walk through the hiring process” with Ammerman.

The reason for their hesitation was understandable. It seemed he was unable to hold a pastoral position for more than two years. TCC would end up being his 5th church in the span of 8 years. There seemed to have been some issues, but nothing specific was mentioned. However, the CMA appeared to push Ammerman. At the time, he was still credentialed.

Something was amiss. Ashe, a concerned member, expressed his concern to the CMA.

Guess who got in trouble? Ashe!

…the pastor and other elders began preparing a statement on how they (the elders and pastor) were going to try and “Biblically Discipline” Ashe for going forward to the C&MA and speaking up about the church leadership and their failures to protect the flock’. Elder Campise announced his resignation from the elder board and membership in the church. Another elder would resign in a few months.

Things went from bad to worse.

And here is where this story ties into a story from ten years ago.

In August 2021, the truth came out. It appears that he had pled guilty to his former church of sexual harassment. This allegedly has still not been communicated to the members of TCC.

In 2012, the CMA was notified by another church, First Alliance, of harassment charges against Ammerman.

About a month ago, I was contacted by Robin Currie, who bravely permitted me to use her name. She is currently in North Carolina, having evacuated her home in Florida due to Hurricane Ian. She tells me her area did not receive a direct hit from the hurricane. I’m so glad for her!

Robin served as the Celebrate Recovery Administrator and Office Secretary, along with CL for First Alliance Church. On the first day of Ammerman’s job, he insulted Robin, who reported to Pastor Scott, the Senior Pastor. He never addressed it. However, the insults would continue. He made another negative comment about Robin, saying women like her should be used to that kind of talk.

Shortly after that, Amerman’s wife, Jennifer, speaking in the Church office, referred to CL as b***h. Although Robin and CL reported this to one of the elders, no action was taken by the church. I believe it was the lack of immediate action by the leadership that allowed this behavior to escalate quickly,

Ammerman made a sexual comment to Cindy Long when her husband who was the Youth Pastor was out of town. Robin and CL reported this to the elders, and, of course, nothing happened. The leadership decided to transfer him to a sister church in North Port. Pastor Chris Long objected, stating that the Longs and Robin Currie would sue the church.

Many women and girls came forward, claiming Pastor Ammerman was harassing them. The SE District of CMA entered the picture.

The youth pastor finally said if they didn’t do something to hold Jim Ammerman accountable, he would sue the church. The church sought legal counsel and was reportedly advised that they better settle this. By this time, others were coming forward.

The  SE District representative, Chuck Hughes, somehow got involved. I believe there was a canvas of the church to see if others had experienced inappropriate comments, rudeness, sexual harassment, and touching by Pastor Ammerman. Around 40 folks were scheduled to be interviewed during a hearing at the church. So many instances were reported that the interviewers stopped their queries after about 25 women and girls testified of his misconduct.

The threat of a lawsuit appeared to motivate the church, and possibly the SE District of the CMA, to act.

The CMA appeared only to want to move him to another location. This type of response by church leadership is the typical, inappropriate response to sexual harassment. They turf the problem onto the next church. Yet, as we know, ten years later, Ammerman was pushed by the CMA to be the next pastor of Trinity Christian Chapel. Is this stupid, or what?

As you will see, Robin and Cindy had to pursue the CMA to receive information about Amerman’s discipline. Robin had kept the letters from 2012! 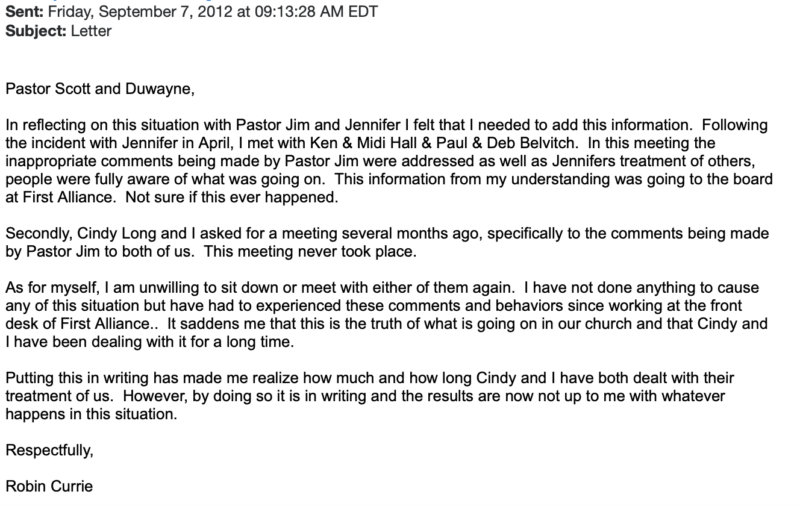 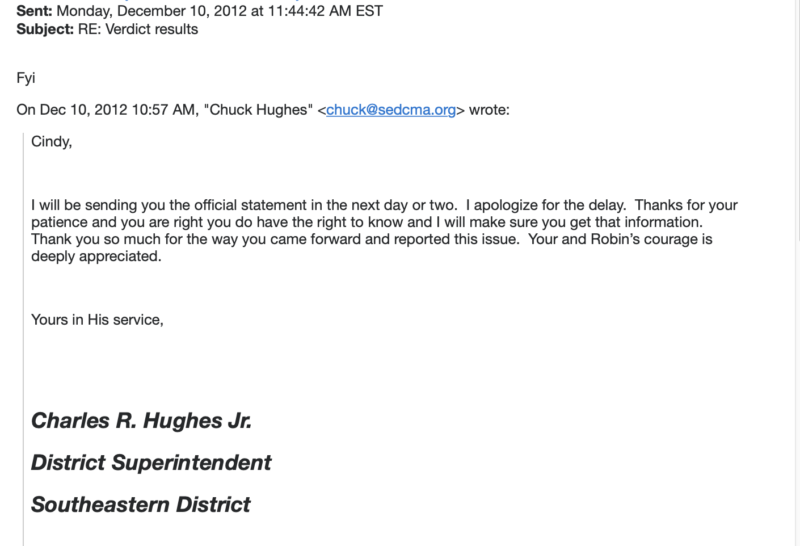 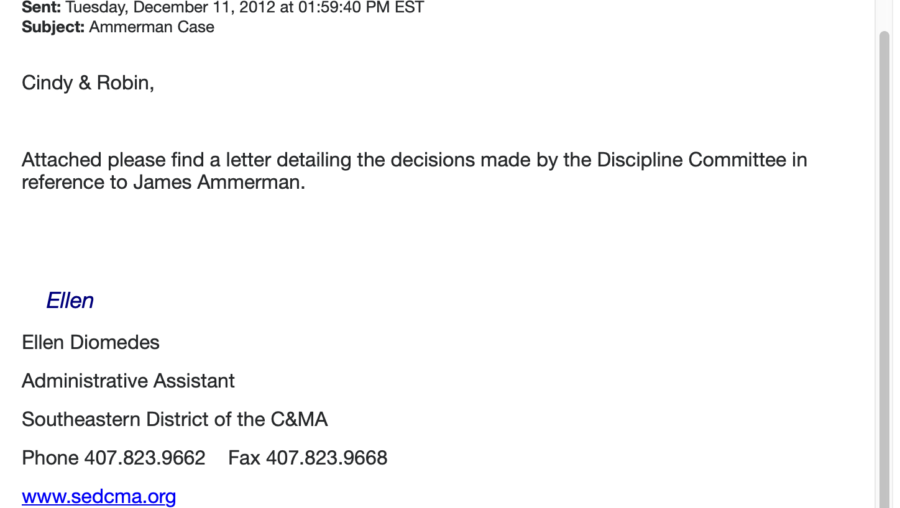 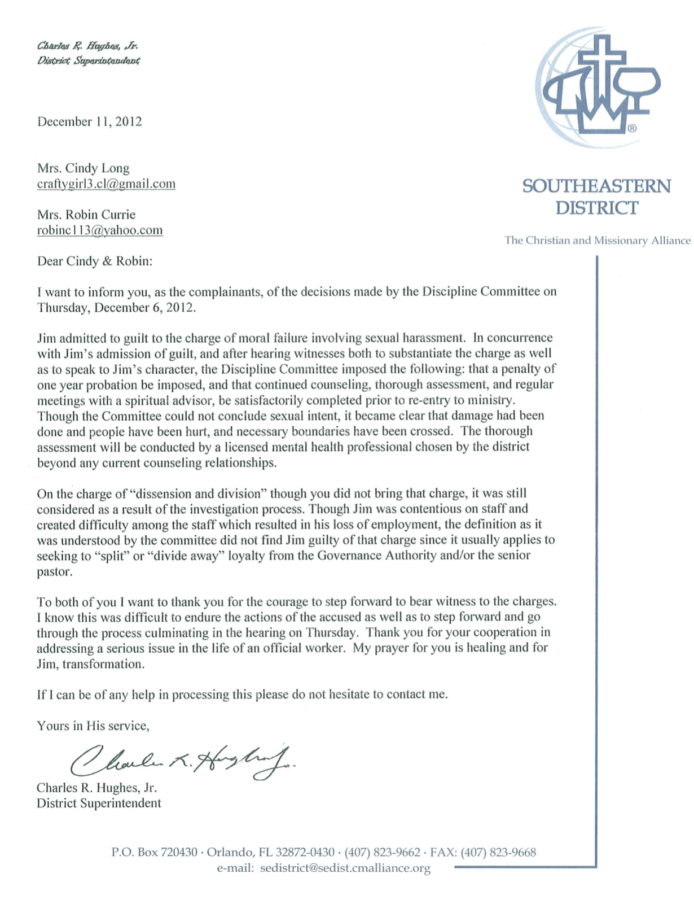 Robin had this to say.

Our decision to come forward was not taken lightly and had a profound impact on each of us.  These incidents were numerous and constant with Jim Ammerman and the church chose the route of denial until forced to act.  Prayerfully, this will change going forward.

In that post, we saw Ashe harassed by a probable church member. Others were also upset that Ashe pursued the truth when they preferred the “status quo.” I think the church and the CMA owe him an apology.

In the meantime, “Ashe” was harassed by those who apparently don’t understand that exposing sexual harassment in the church is a godly pursuit. Maybe the elders at TCC or the CMA could do a sermon series on how to reflect Christ on social media? 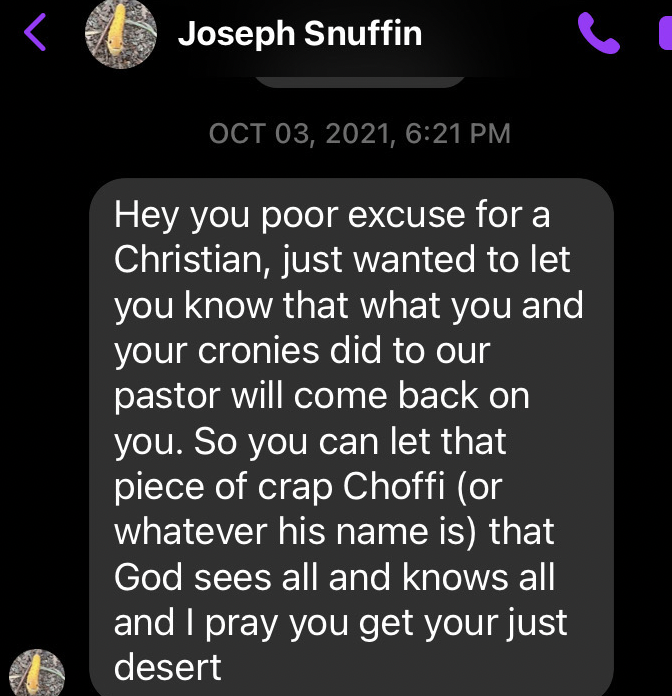 What about the CMA?

I believe there is a serious problem within the organization. Perhaps it is time for an independent, third-party investigation by a group like GRACE. Let me quote from the first post. Remember, Ravi Zacharias was a member of the CMA, and we know how that went.

The unanswered question: “Why did the CMA circulate the CV of a pastoral candidate who had been accused of sexual harassment ”

This makes no sense to me. Perhaps the CMA might be willing to answer this? It’s time to take a hard look at what they really believe about sex abuse and harassment. It is highly unlikely he would have been hired by TCC if this had been known. This appears to have resulted in so much pain and conflict at the church.

In keeping with something I said about Zacharias, let me leave you with this question.

If he is guilty of sexual harrassment when he knows people are commenting and also might be watching, I wonder what he does when no one is watching…