“I also saw under the sun this example of wisdom that greatly impressed me: There was once a small city with only a few people in it. And a powerful king came against it, surrounded it and built huge siege works against it. Now there lived in that city a man poor but wise, and he saved the city by his wisdom. But nobody remembered that poor man. So I said, “Wisdom is better than strength.” But the poor man’s wisdom is despised, and his words are no longer heeded. The quiet words of the wise are more to be heeded than the shouts of a ruler of fools. Wisdom is better than weapons of war, but one sinner destroys much good.” [Ecc 9:13-18 NIV]

Jennie Allen, IF:Gathering Founder, Shares IF : Equip Vision from IF Gathering on Vimeo.

Let’s take a brief look at the “IF Gathering” money situation. The Non Profit cashed in on both rounds of the PPP loans/government handouts. The first loan was approved in May 2020 and IF Gathering complied with the requirements of the PPP loan therefore the loan was forgiven.

I have ethical issues with Christian churches and para-church organizations taking free money from the tax payers of the United States, but that is an argument for another time. The point is IF Gathering netted $448,000 of free money from the PPP loans. But, as everyone knows, there really are no free luches.

Next I have some screenshots of the Revenue IF Gathering has reported on their 990 forms for 2019-2020. As you see below, the 2021 actual forms have not yet been released but the IRS has provided extracted financial data.

IF Gathering had a total revenue in 2021 of nearly $5 million. Not bad. The executive compensation was $315 thousand.  Other salaries and wages was $940 thousand. The executives were not listed in this summary. 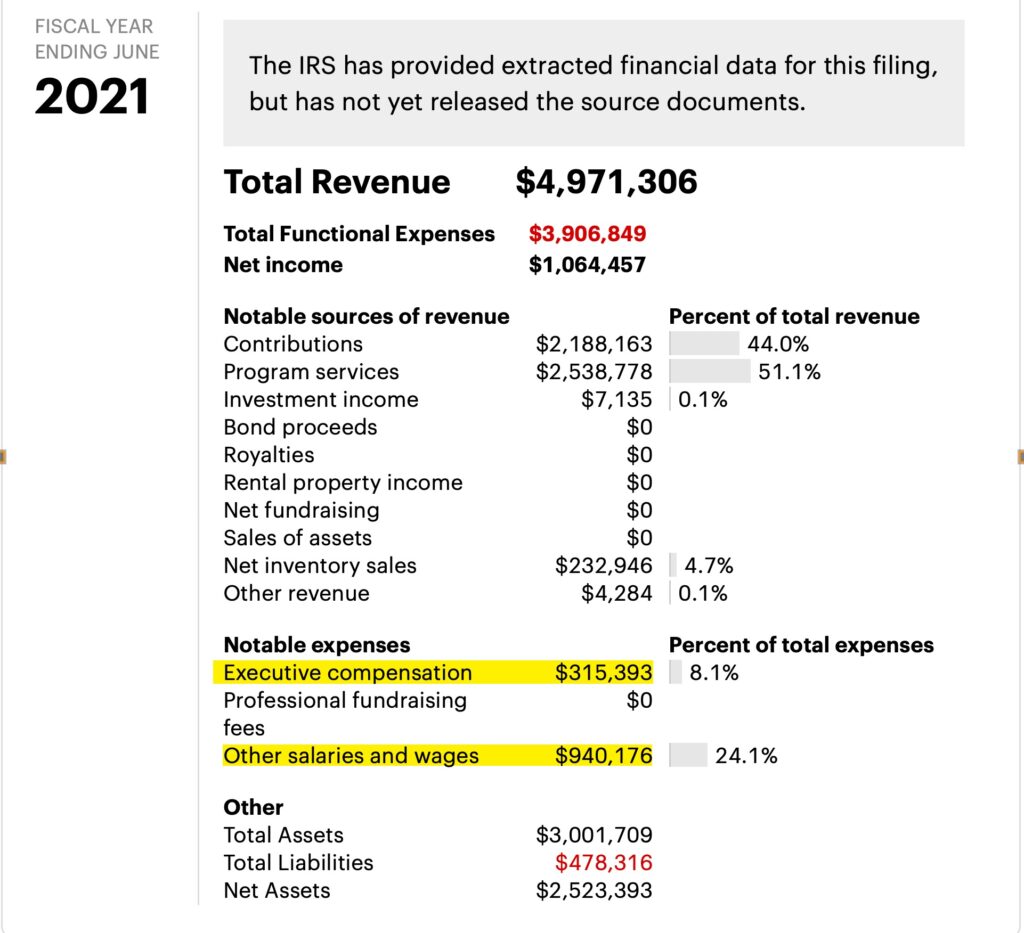 In 2020 Revenue was significantly lower but executive compensation was only $15 thousand lower while other salaries and wages were $210 thousand lower. You will also see the list of key employees and note that Jennie Allen, the founder, received a salary of $89 thousand.  This is not totally accurate though, as I will explain in the 2019 form. 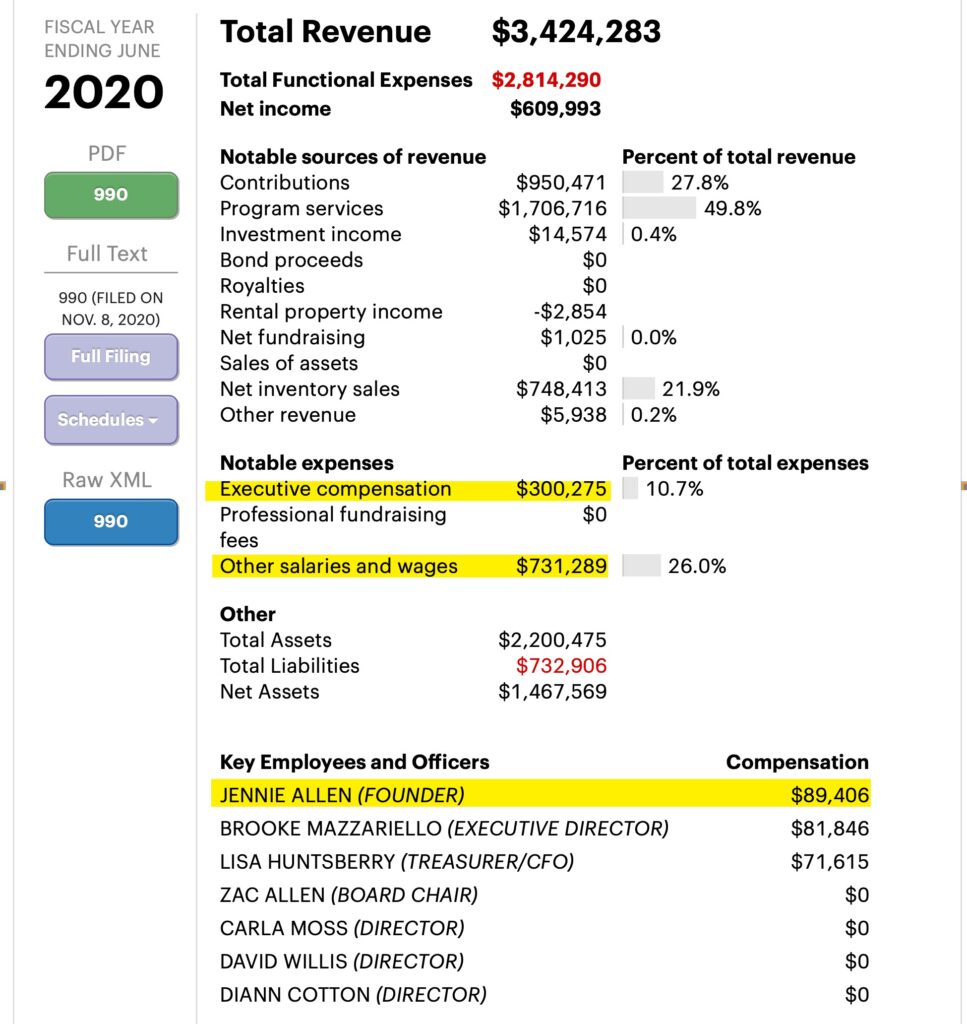 Immediately below are screenshots taken from the actual 990 form for 2019. I made the second screenshot large to make it easier to see. You will note that Zac Allen, Jennie’s husband, did not receive a salary but he did receive nearly $10 thousand of “other compensation.” This could be an automobile allowance, a housing allowance, or some other form of compensation besides salary. 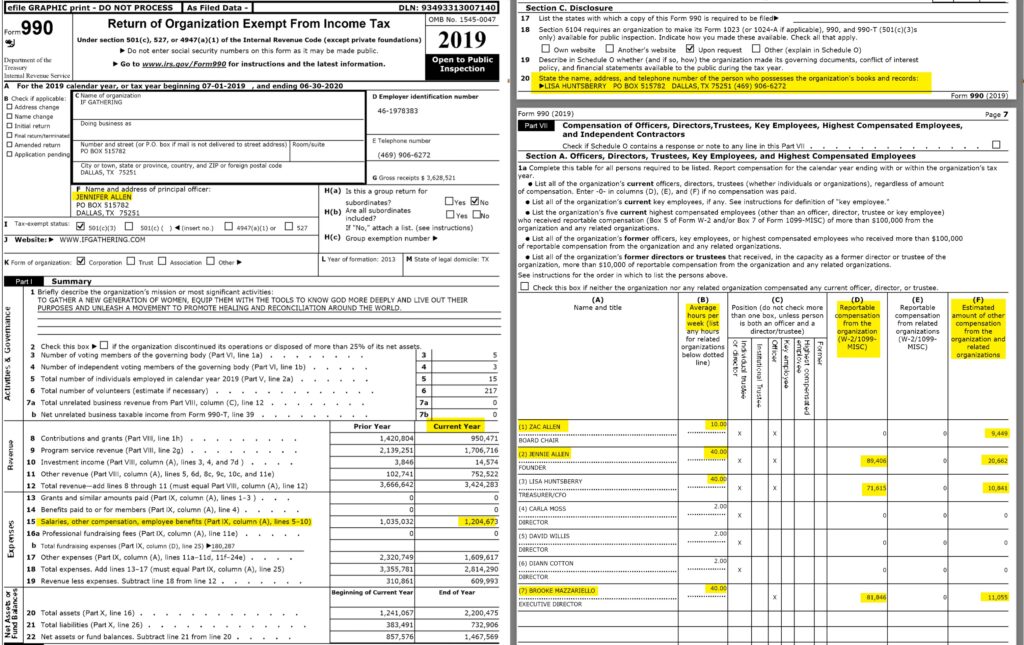 You will also notice that Jennie Allen’s compensation is listed as $89 thousand, but she has other compensation in the amount of $20 thousand. So she is actually pulling down about $110K for the year. 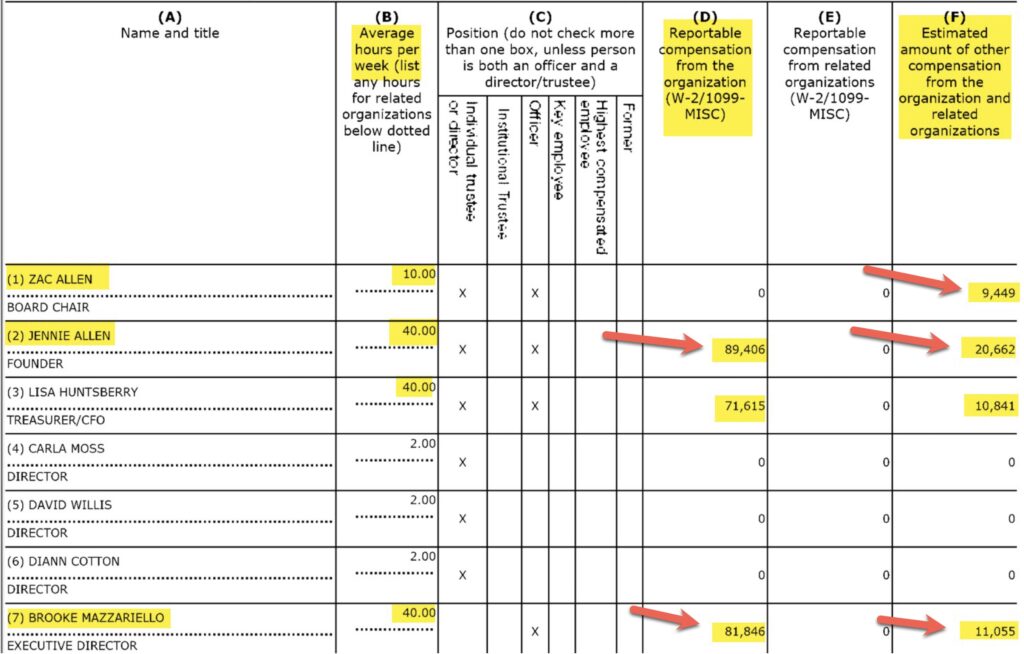 The form below is a summary taken from the actual 990 which is partially shown above. It’s just like the summary for years 2020-2021. 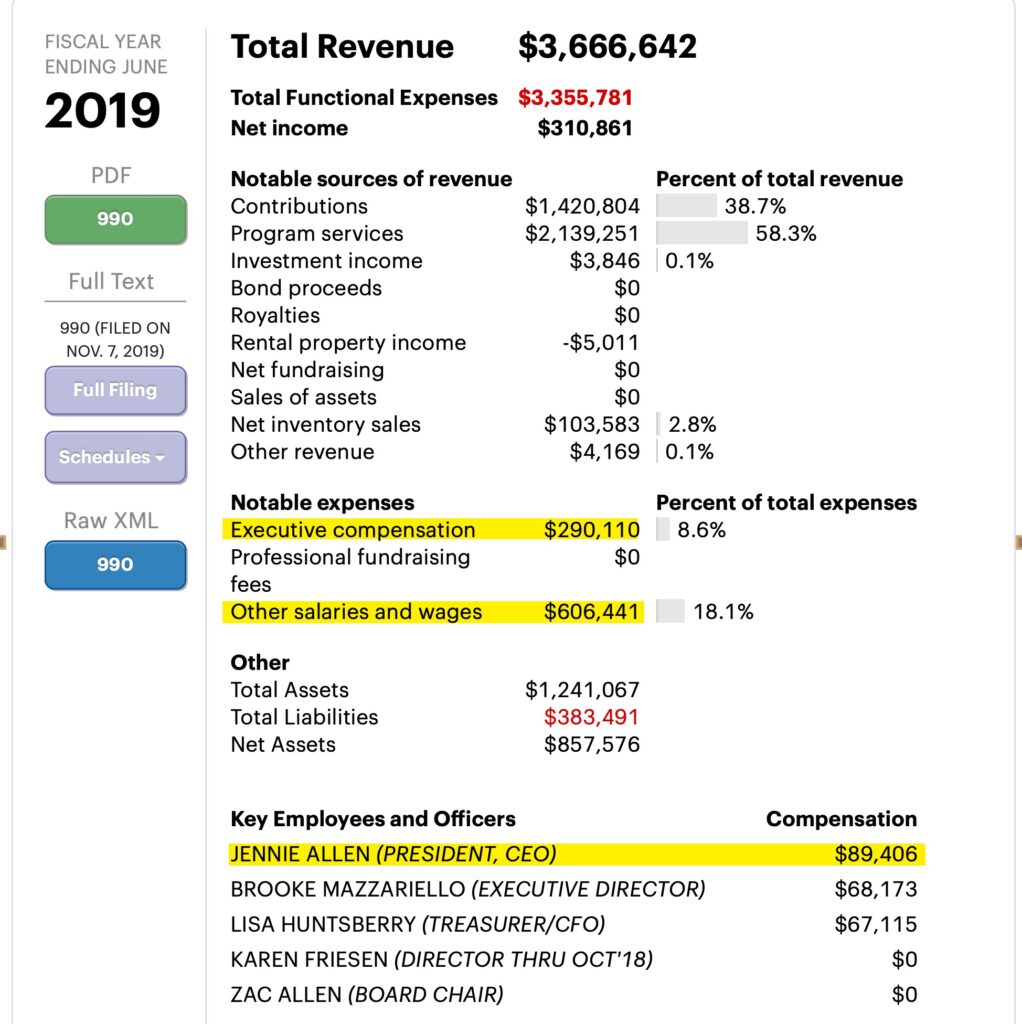 So where does Matt Chandler fit into IF Gathering?  Well, he is a featured speaker at IF Gathering gatherings and he also speaks in some of their podcasts.  I would guess he is paid nicely for his services, but I have no way of telling what his take is. 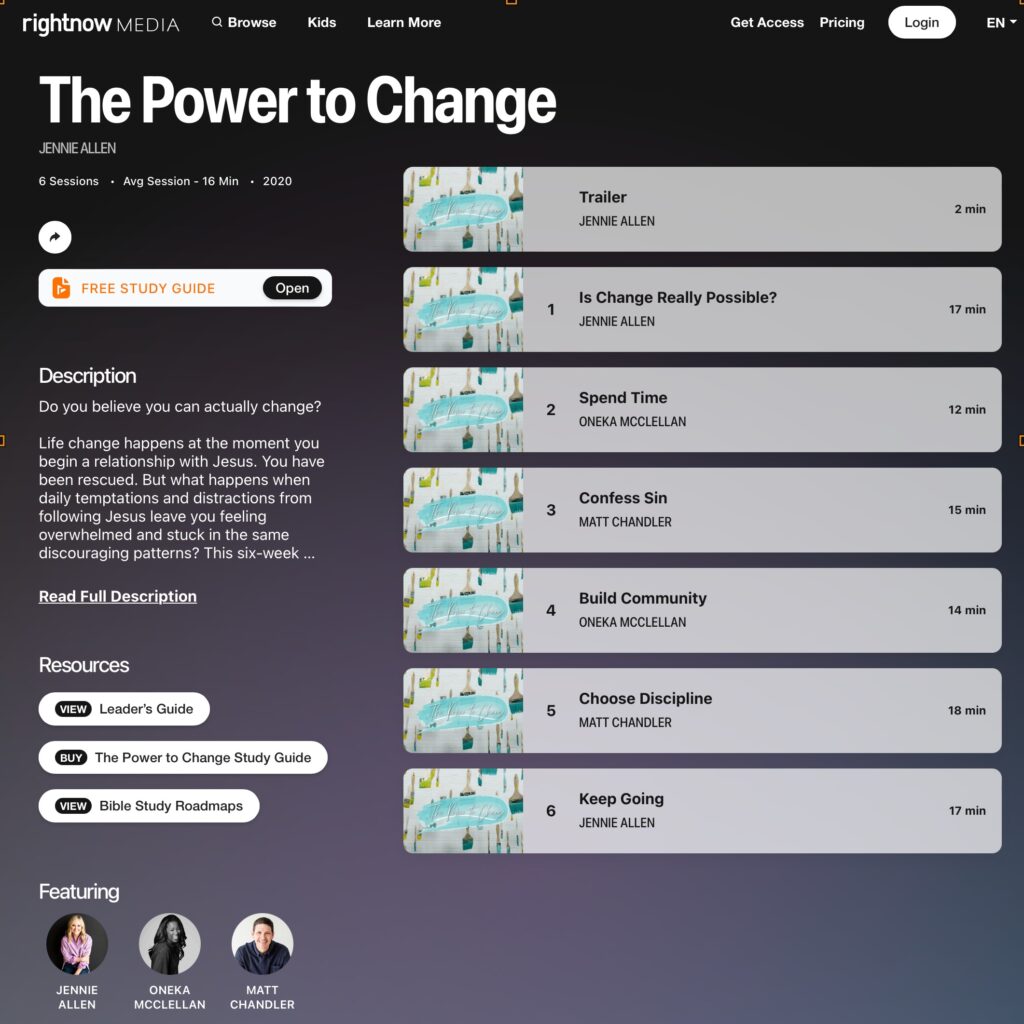 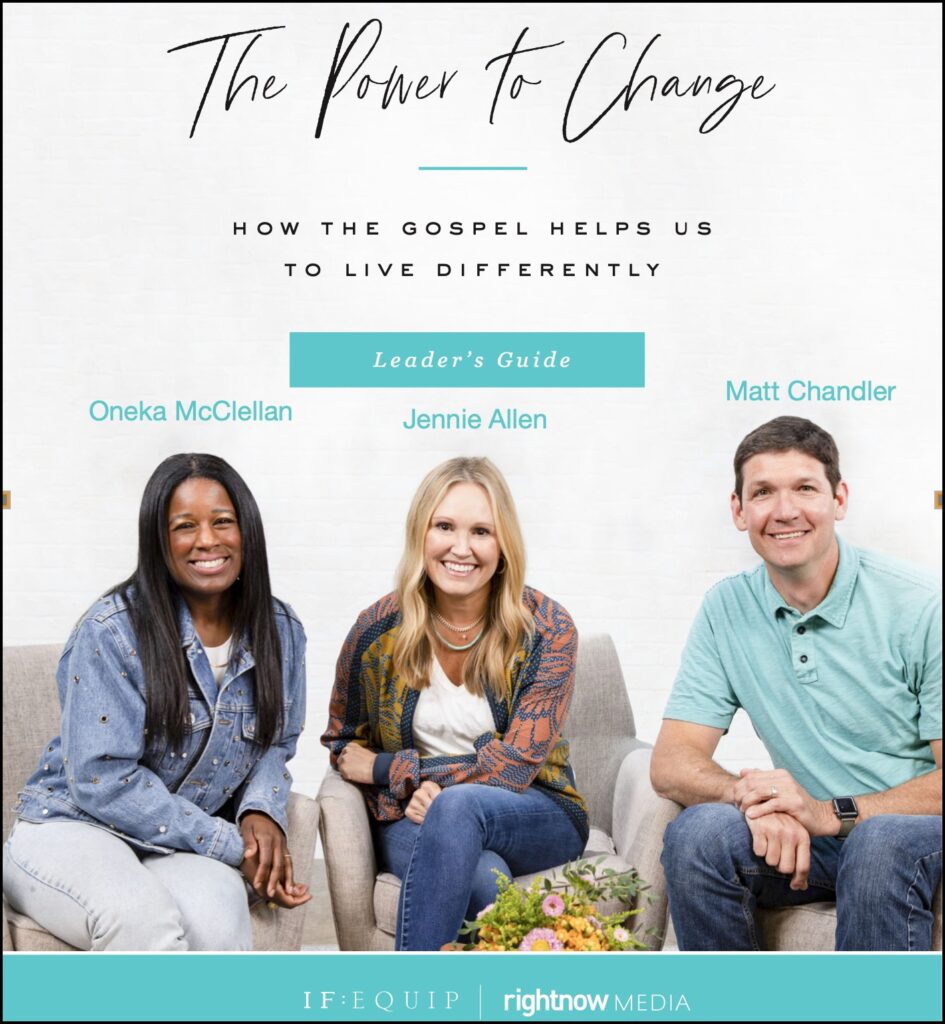 Lauren Chandler is also a huge fan of Jennie Allen, as you can see from her endorsement below. 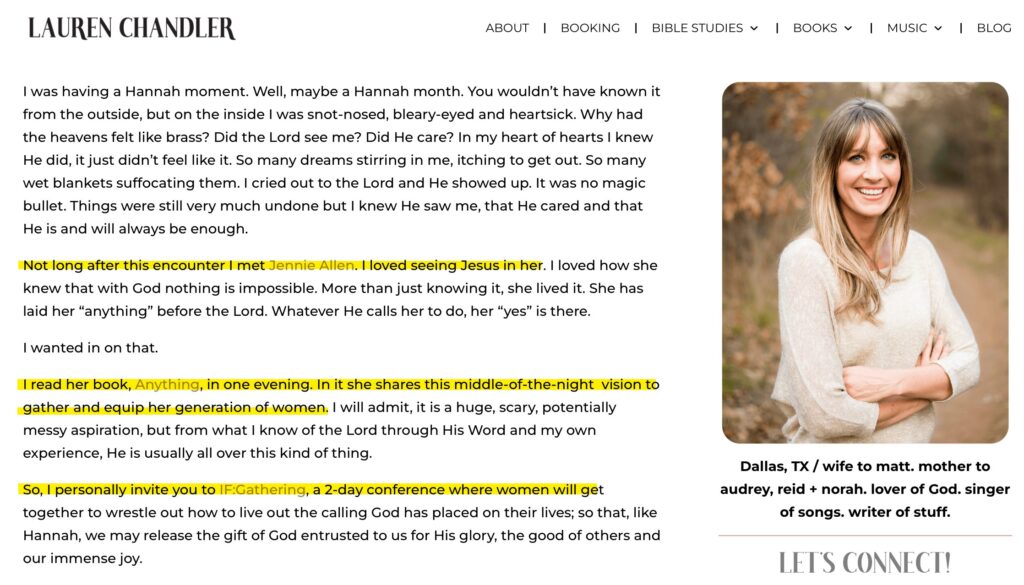