My thanks to Anna, author of the blog “No Eden Elsewhere,” for forwarding much of the valuable content I have included in this article today. She has done a marvelous job exposing abuse in her blog and if you haven’t seen it I would encourage you to check it out. -TW

Here is a recent clip of Matt Chandler, the lead pastor at The Village Church, giving a Sunday morning talk to his faithful followers.

Unsurprisingly, Chandler takes a shot at social media, indirectly blaming them for people leaving church. Chandler stated that “Church has always been a mess, there’s just social media now.”  He is correct in saying church has always been a mess, but I would argue that social media is simply the medium people in our day utilize. Unquestionably it’s a very effective medium, getting news out nearly instantaneously on a global scale. In the Apostle Paul’s day he had to pen letters on parchment and then have them hand delivered. Martin Luther had to put pen and ink to paper and then nail his 95 thesis to the door of the Wittenberg Castle church. No telling how many people left the Roman Catholic church due to Luther pointing out the corruption among church leadership. Reaction by church leadership in 1517 was not unlike the reaction we see today from the Evangelical Celebrity Pastors such as Matt Chandler.

What I will question today is the statement made by Matt Chandler from the video above:

“They’re (pastors) not in this for money, or power.”

Chandler’s statement is what I label a “broad-brush” statement. Just as it would be foolish of me to claim that all 700 Acts 29 pastors are in it for the money or power, so too, it’s foolish for Chandler to claim that 700 Acts 29 pastors are not in it for the money or power. Chandler has enough life experience to know that among 700 pastors there will be a percentage of them in ministry with ulterior motives.

With this in mind, I want to draw your attention to some items that got my attention. The individuals I mention may or may not be chasing money and/or power. I simply want to lay some things on the table and folks smarter than I can investigate further and perhaps come to some intelligent conclusions.

You will recall that in an article I wrote last week titled “My Visit to The (it takes a) Village Church,” I mentioned Chandler in relation to a company that he had a financial interest in called “Texas Craft Steaks.”  In researching the company it appears Matt Chandler and his business partner, Lance Autrey, owned the company from 2017-2019. The company still exists, but under different ownership.  I have emailed the company and asked them whether Matt Chandler is still a part of the company, but as of this writing I have not received a response.

Below is a screenshot from “Relevant” in 2019 naming Chandler and Autrey as co-founders of Texas Craft Steaks. 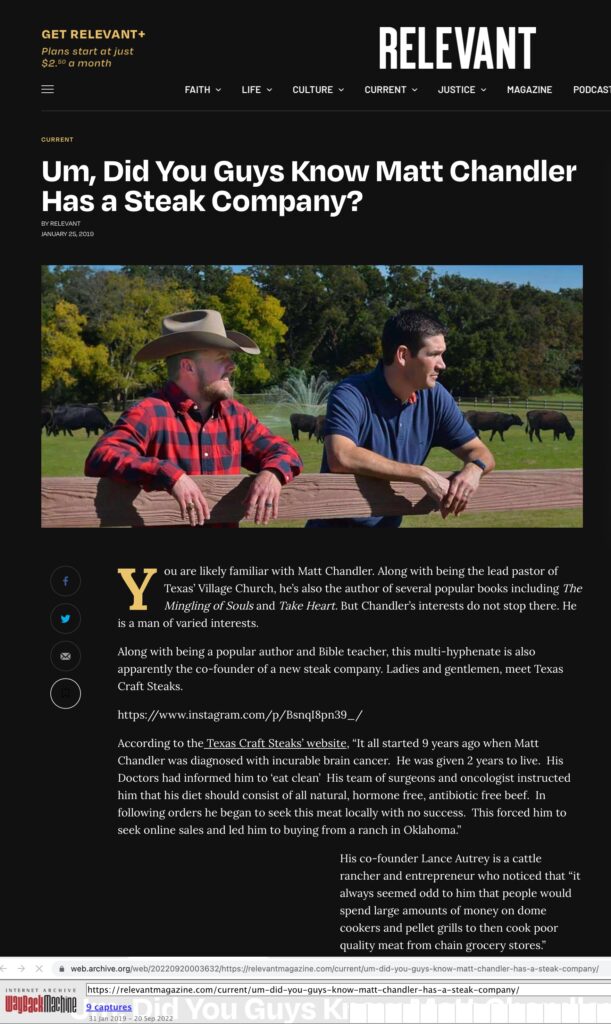 Here is a screenshot of Lance Autrey’s “Linked in” account showing the dates he was the “Chief Executive Officer” of Texas Craft Steaks. 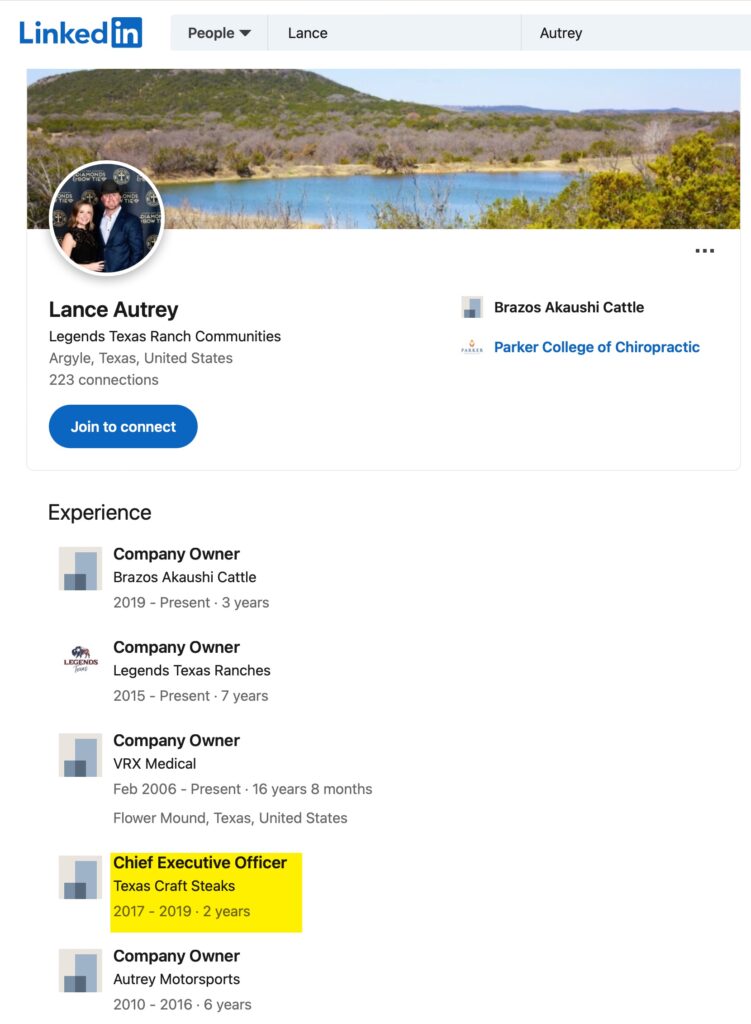 Who is Lance Autrey? He is a chiropractor and an entrepeneur who has apparently started up many companies. In conducting research it appears he currently is involved with about 10 different LLCs.

Autrey states below that he attends the Village Church in Highland Park. It is unclear how or why he became business partners with Matt Chandler, but Chandler is not the only individual in Christian ministry that Autrey has worked with.

It appears not all of Autrey’s business ventures have been successful. Below are two LLCs that are no longer in existence due to tax forfeiture. Note that Ranch Development Partners has Autrey and Zachary Allen listed as Managers. Zachary Allen is a former pastor, but more on that later. 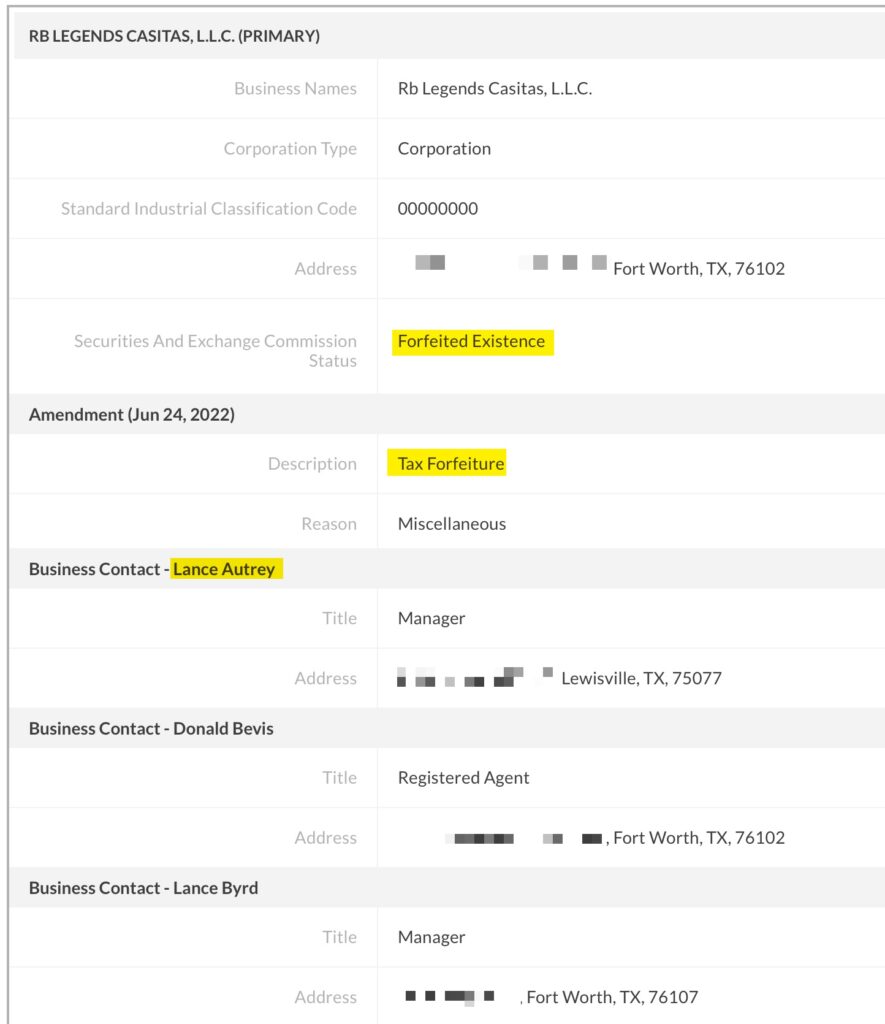 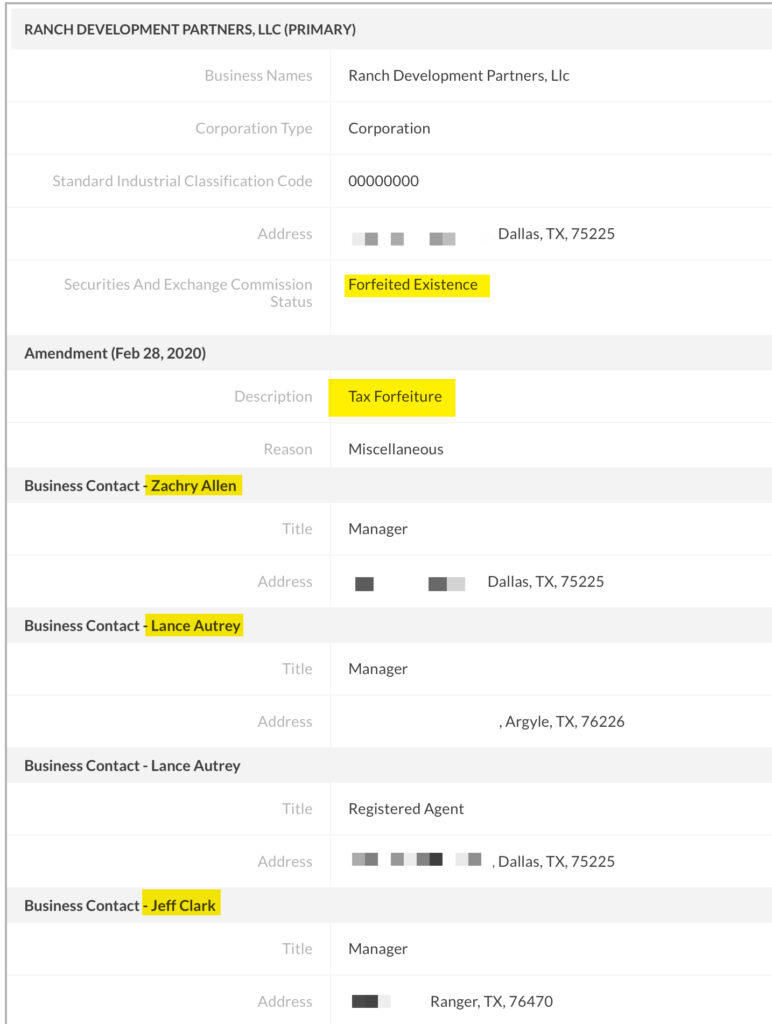 Chandler is also involved in another LLC with Autrey called Armis Dei.  I couldn’t discover what this business does. Armis means “arms” and Dei means “God” in Latin, so it could be a Christian organization as in “you are safe in the arms of God”, or perhaps it is a firearm company. If anyone knows please advise me in the comments.

Around the same time Chandler got invovled in Texas Craft Steaks he and two other pastors from The Village Church started an LLC called SomaSolutions. The company was dissolved in April 2020. The other two pastors were Josh Patterson and Brian Miller. Patterson was the main man in the recent TVC church service where the announcement of Chandler’s indiscretions were announced. I am not familiar with Brian Miller. He is no longer pictured on the web page of The Village Church in Flower Mound, but perhaps he is a pastor in one of the spin-off campuses. Again, anyone with knowledge of this please advise me in the comments. 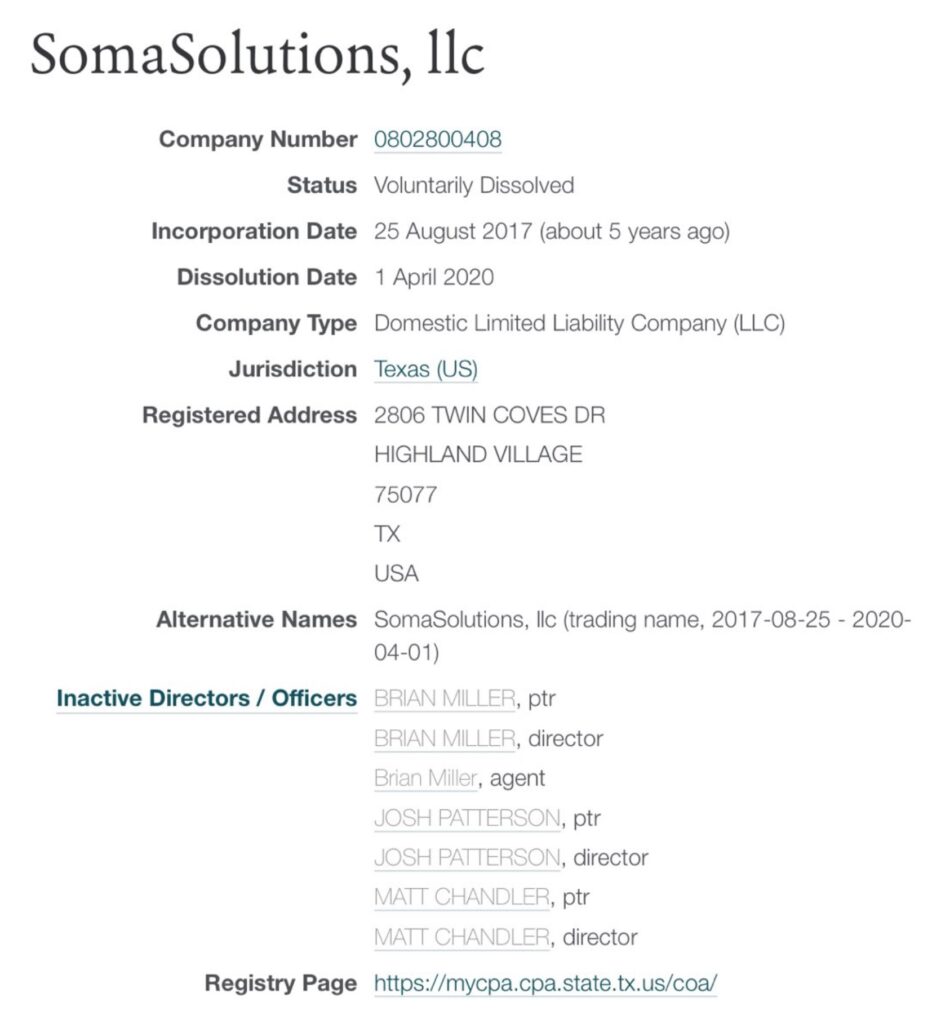 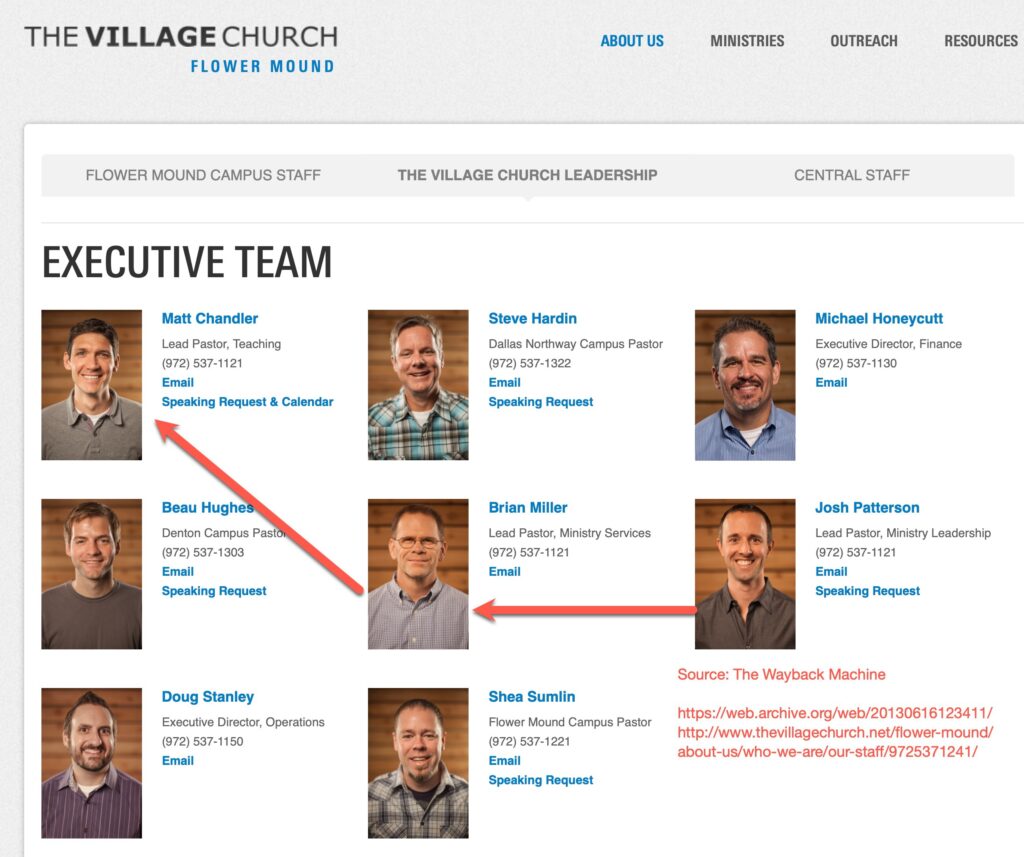 Here is a partial listing of companies Lance Autrey has been a part of:

Note that right below Matt Chandler’s name in the connections section is the name Shane Everrett. Shane is on staff at Watermark Community Church and worked with Matt Chandler in his pre-Village Church days. 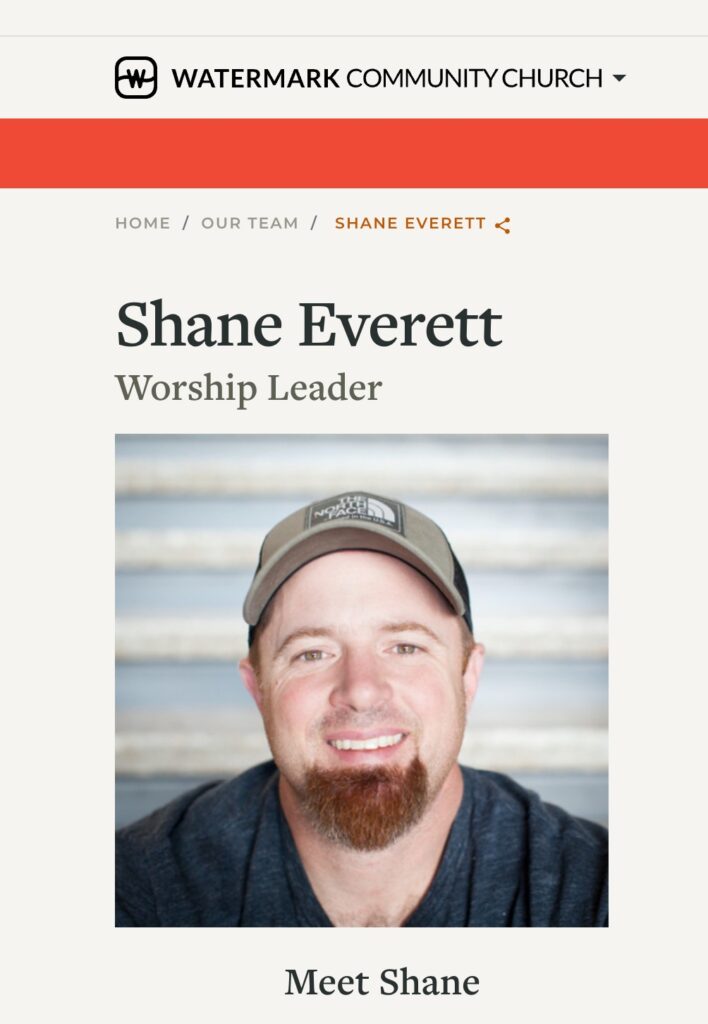 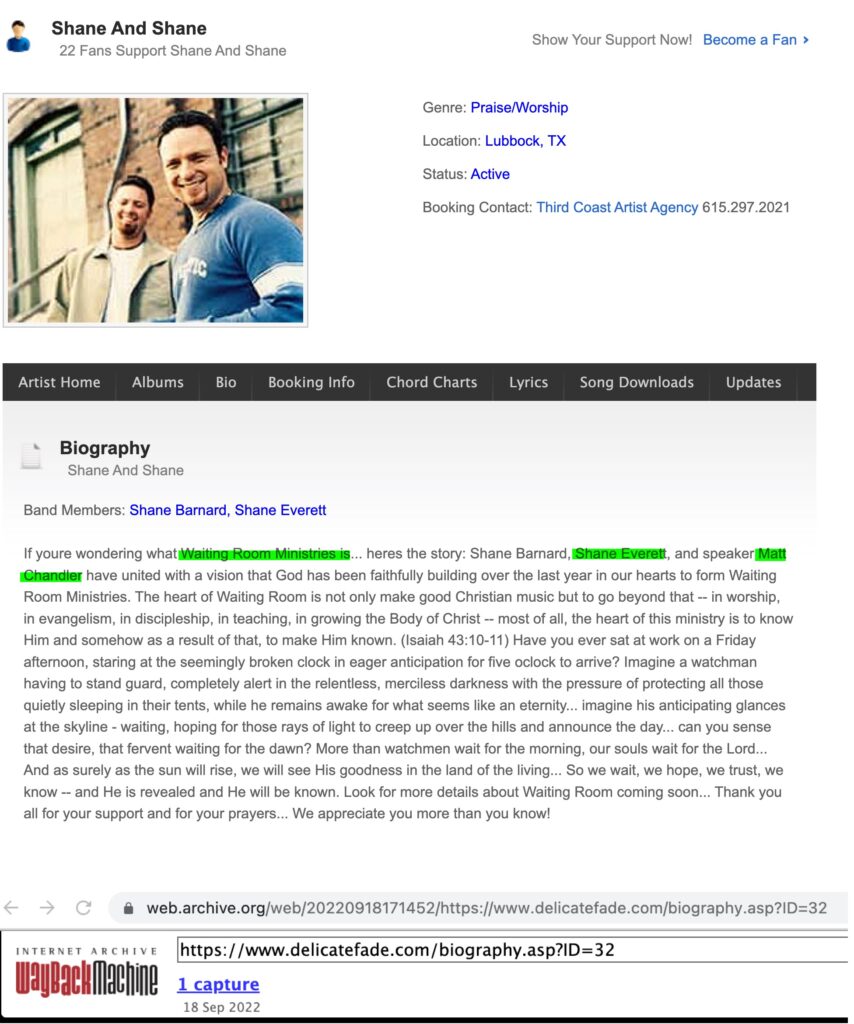 In 2020 Matt Chandler became involved in a non-profit called “Schoolhouse Mountain Retreat.” Below is a listing of those involved in this organization. Matt Chandler, Lance Autrey, and Zachary Allen, among others are listed as Directors. 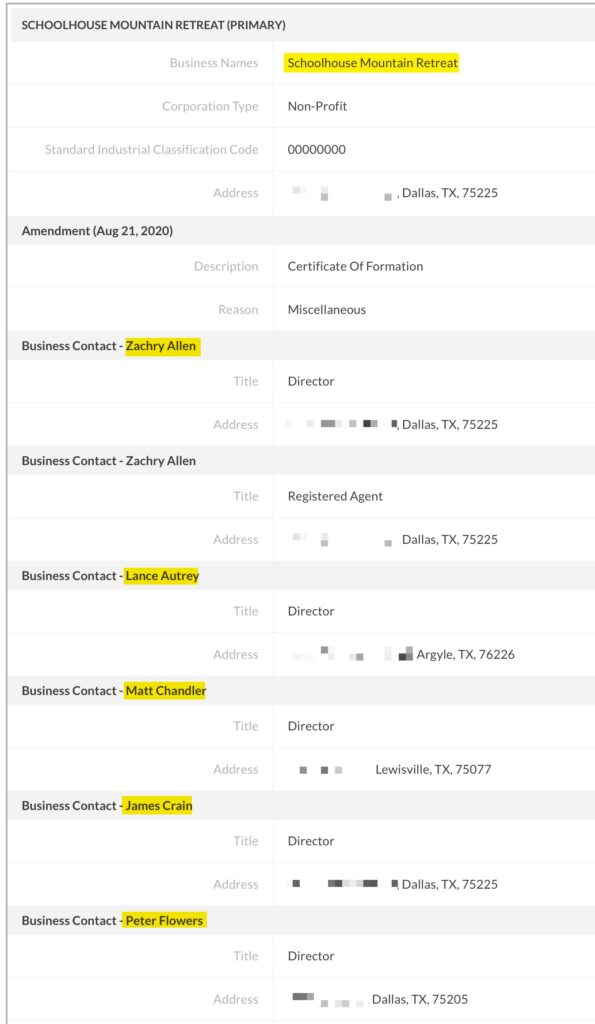 The address on file for the Schoolhouse Mountain Retreat is Zachary and Jennie Allen’s home address. Matt Chandler is listed as the Director. 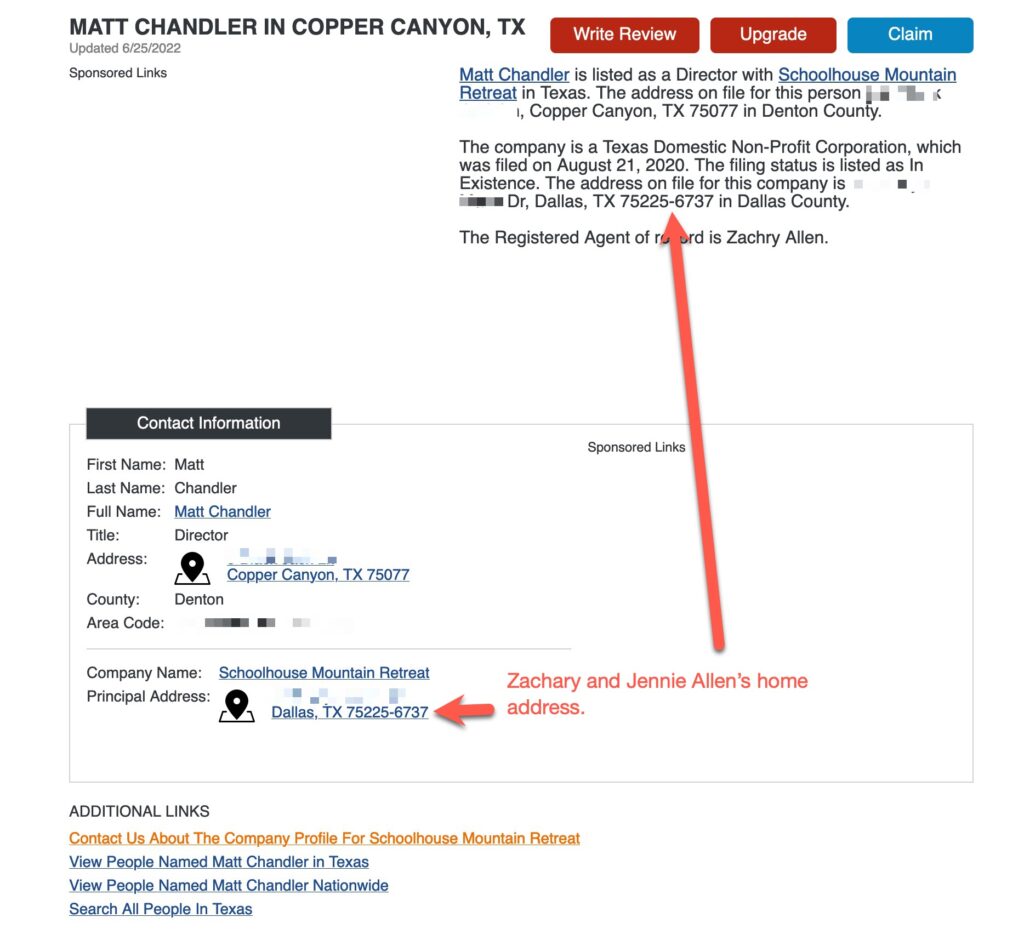 I could find no information on Schoolhouse Mountain Retreat. They are required to file a 990, but GuideStar had no record of the form.  It could be because the IRS is backed up and has not yet posted the form. 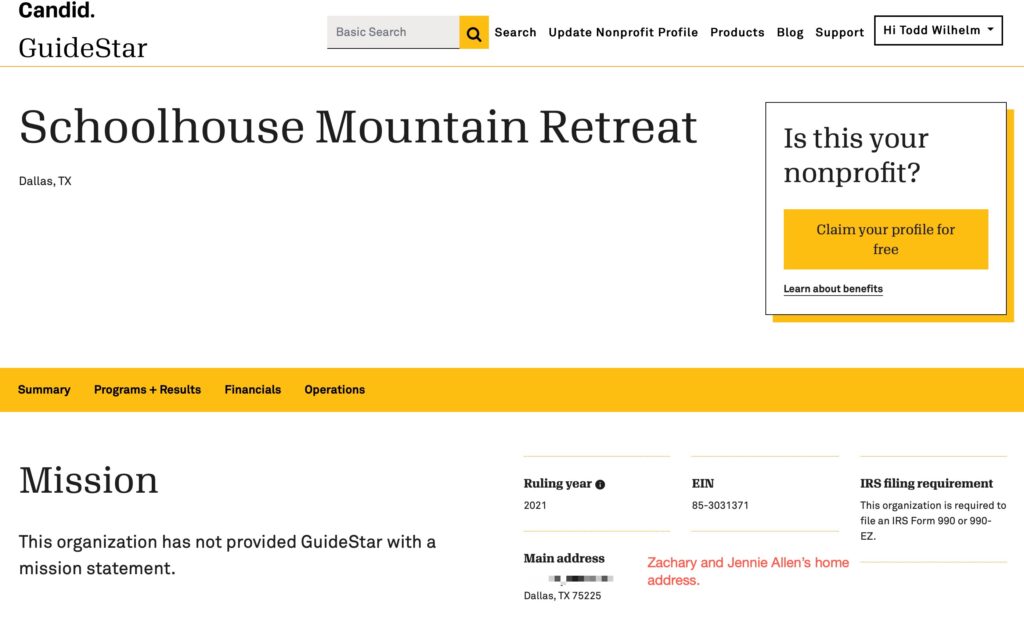 I now want to move on to Zachary (Zac) and Jennie Allen. Based on their appearance on some of these LLC listings they appear to be friends with Matt Chandler.

Here is some information on the couple. 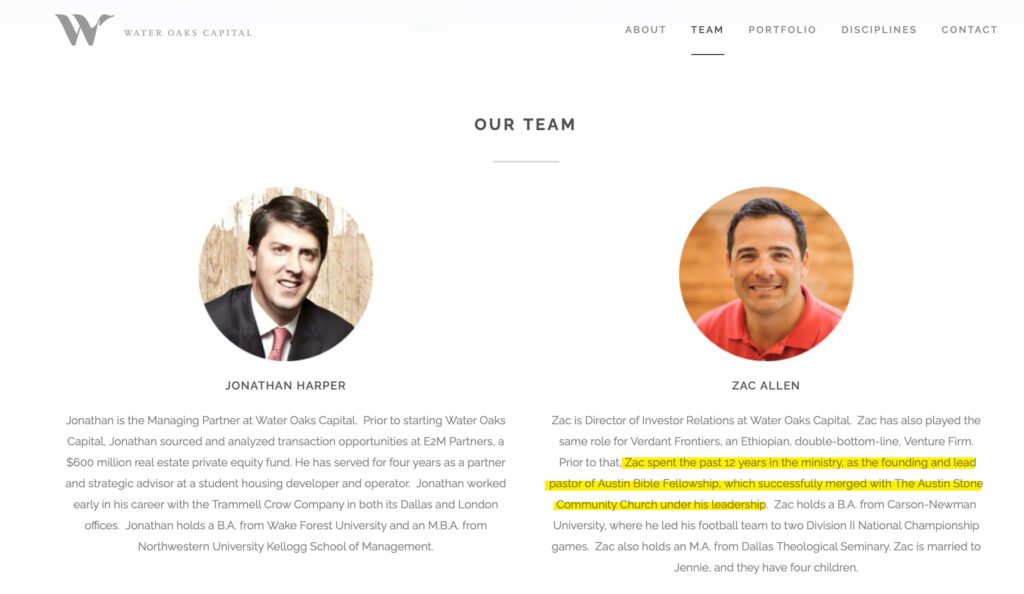 Zac Allen was the founder and lead pastor of Austin Bible Fellowship. The church was merged into Austin Stone Community Church. I am unsure if Zac continued pastoring or if he went right into investing.

I had never heard of Zac or Jennie Allen prior to researching this story, but Jennie Allen seems to be a bible teacher similar to Beth Moore. She has written several books and is reportedly worth $16 million.  I have no idea whether that wealth was accumulated through Christian book sales, etc., investments, or inherited. 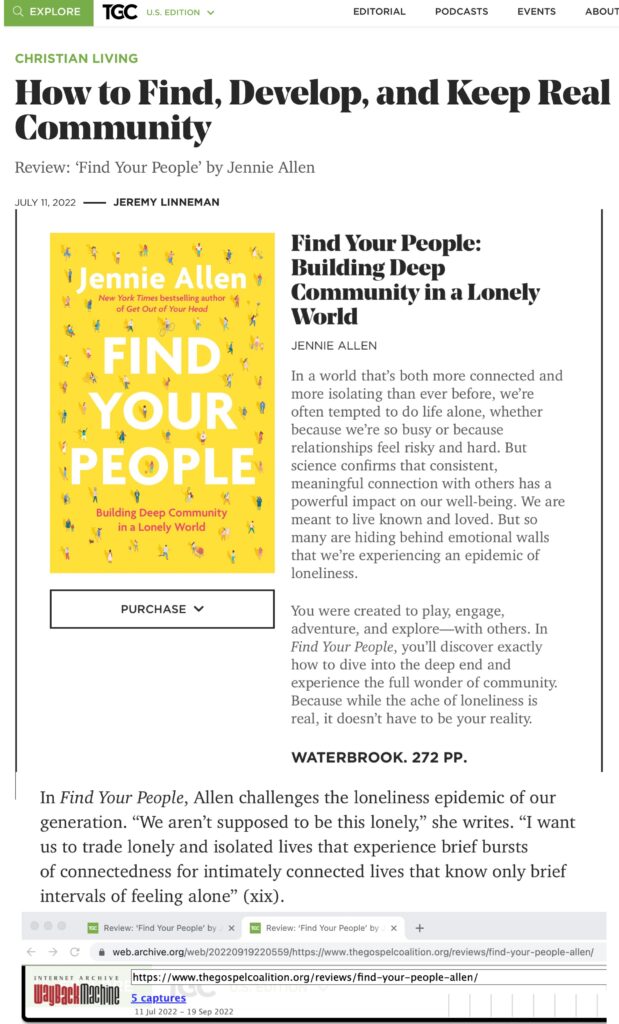 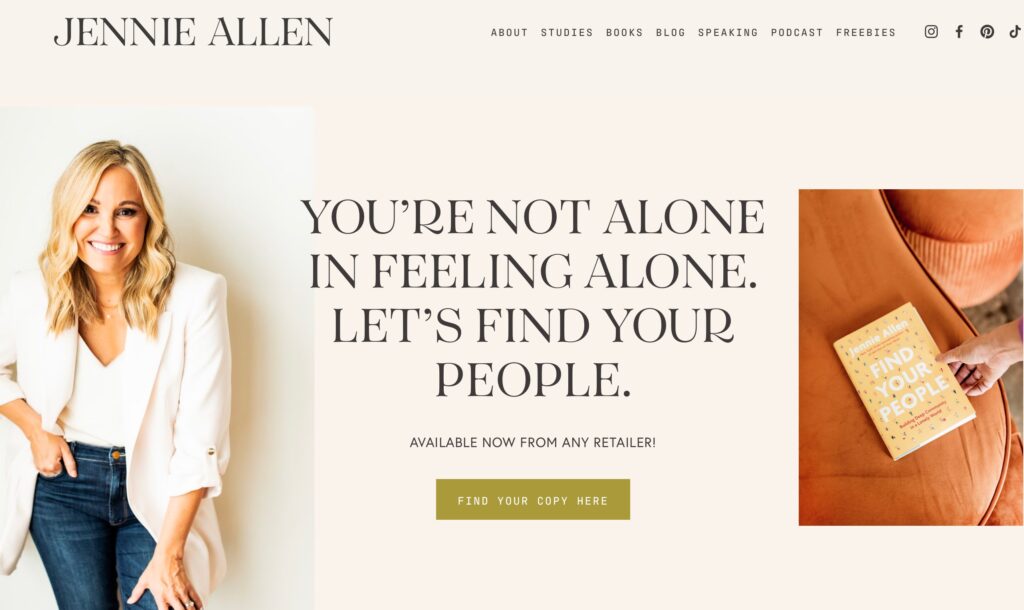 Jennie Allen’s latest book is “Find Your People” and she has spun off a study guide and a booklet for small groups. She also has a podcast based on the book.

Matt Chandler seems to be familiar with her book as he has used the phrase “find your people” in one sermon and quoted her in another sermon.

“IF Gathering” is Jennie Allen’s non-profit organization. In addition to Zac and Jennie Allen listed as directors there is also an individual named Larry Cotton. 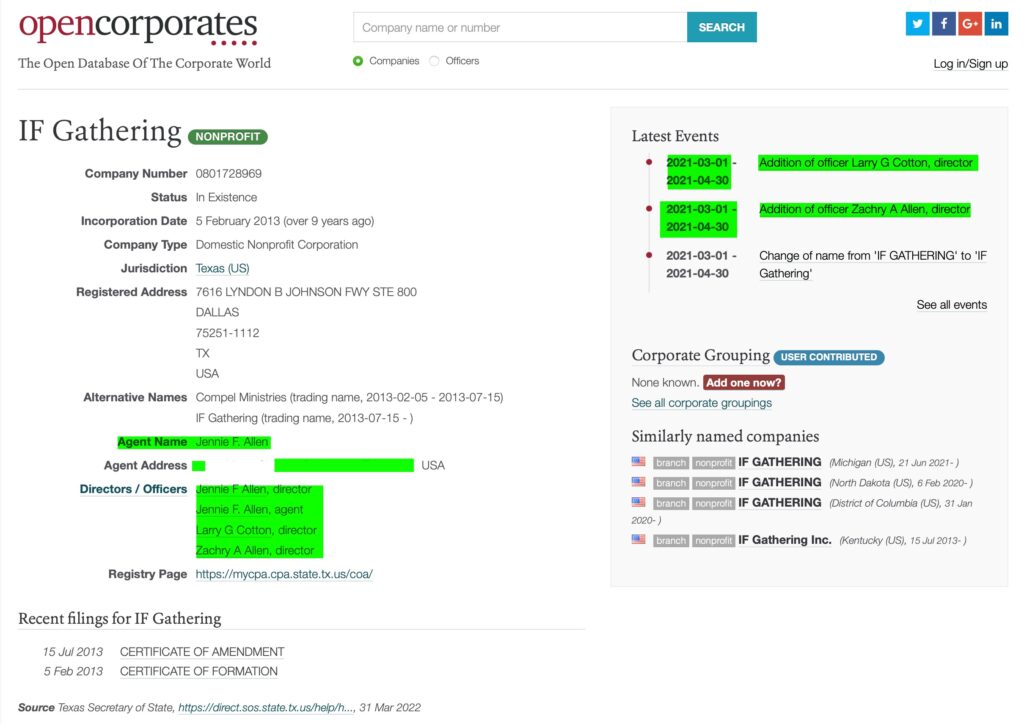 You may recall that Larry Cotton was an assistant pastor at the church where Jules Woodson was sexually abused by Andy Savage.  When Jules told her story publicly Larry Cotton was on staff at Austin Stone – the church that had merged with Zac and Jennie’s church.

Based on this I find it highly suspect as to why, in 2021, the Allens named Larry Cotton a director of Jennie’s non-profit. 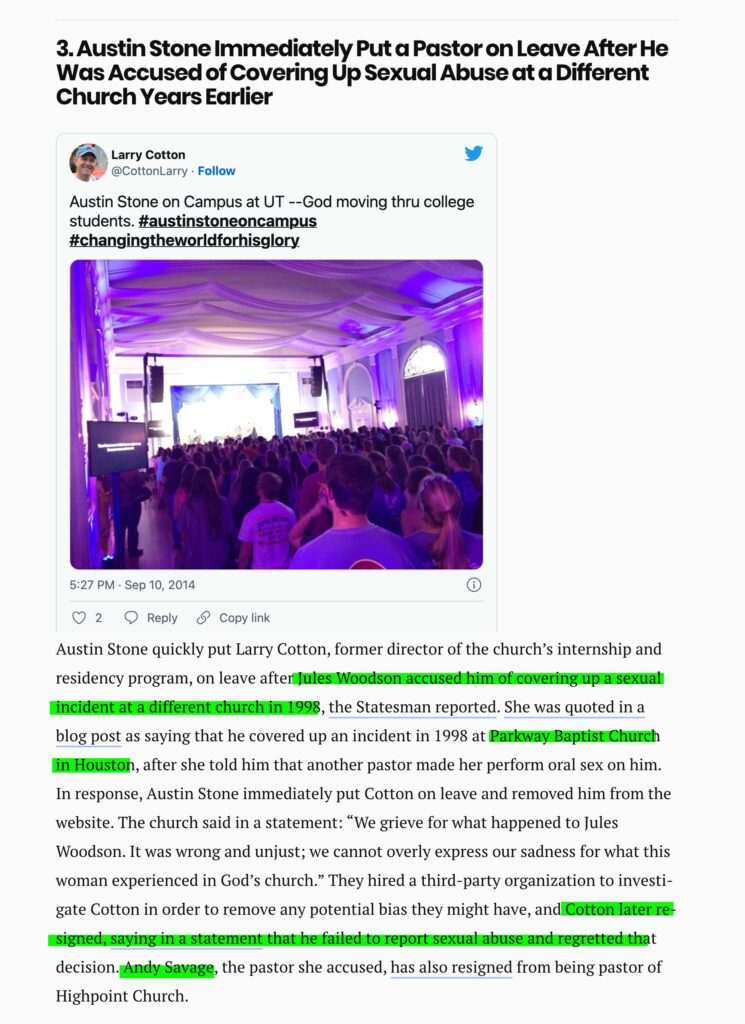 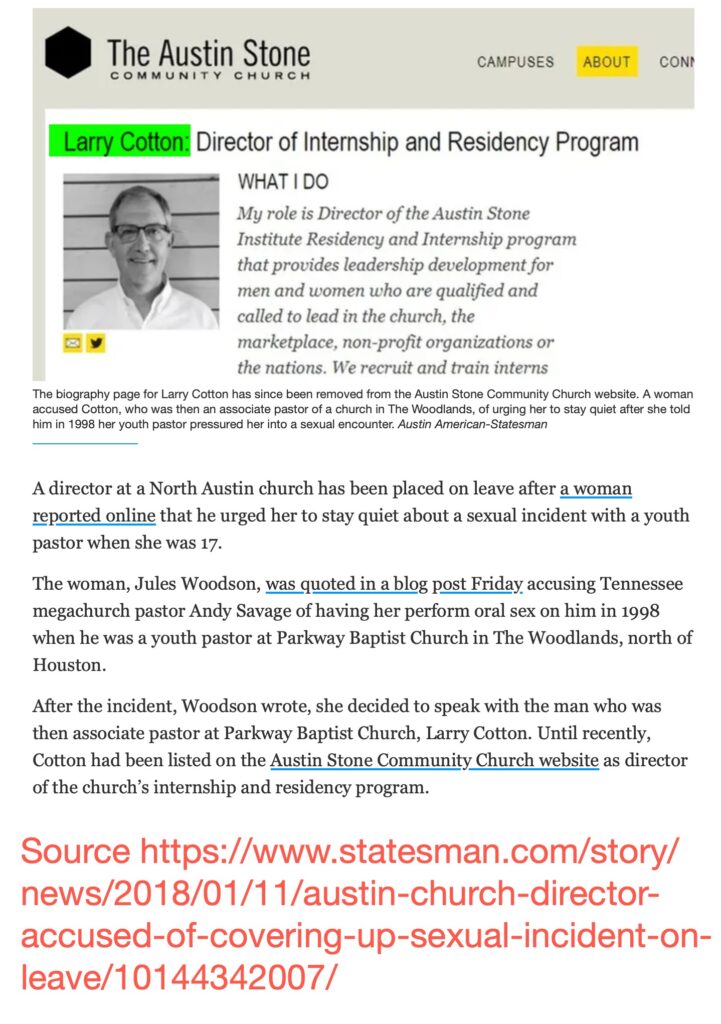 I realize this is a lot of information to dump on you, but I believe I have barely scratched the surface of all these connections. I hope readers to can add information to what is found here.