Earths Glow, the Moon and a Starry Night Nasa
“This was the view as the International Space Station orbited 256 miles above the Pacific Ocean, southeast of the Hawaiian island chain.”

“My argument against God was that the universe seemed so cruel and unjust. But how had I got this idea of just and unjust? A man does not call a line crooked unless he has some idea of a straight line. What was I comparing this universe with when I called it unjust?”  – C. S. Lewis

Since that time, I’ve followed various folks who believe that Feltner is innocent and the victims are not fully telling the truth of what happened. I haven’t reported on this because this stuff always happens when a pastor is outed for abuse of his clerical position. It is standard fare for sad people who cannot believe their chosen celebrity pastor had a past. This causes cognitive dissonance.

Cognitive dissonance occurs when people, who have invested time and money while assuming that they are smart, can’t accept that they could be that wrong. For those folks let me point out something. The reason these types of pastors get away with their games is because they are just as smart or even smarter than the average person. They have to be in order to do what they do. Even though I watch this stuff, this day in and day out, I know that I could be conned by a charismatic predator.

As you may remember, when we last visited this subject, the church was hiring an organization to investigate the situation. On 2/5/20, the Star Tribune posted Burnsville church investigation finds abuse allegations made against former pastor are credible.

The Rev. Wes Feltner, a former lead pastor at Berean Baptist Church, was found by the investigation not to be “above reproach,” meaning that he behaved in a shameful way not “free from sinful habits” and deserving of “rebuke or censure” in the eyes of church elders, according to a recent statement from the church to congregants.

A meeting for the congregation was held Jan. 23 to explain the investigation’s results.

…In their statement to the congregation, Berean church elders said they “do love Pastor Wes” and want healing for him and his family, along with Frey and Hendrickson. They are offering the services of a crisis-management psychologist to the parties.

I always wonder what church leaders mean when they say they want healng for a fallen leader, straight out of the gate. I understand using that word for his family and for the victims. I know what I want for Feltner: straight up repentance with no equivocation.

Then, after attempting to make it right for his victims, real healing will begin. Let’s see what happens. I’ve heard rumors that he is considering  starting a new church. If he does, then we know what his answer is to all of this…

9 Marks, the Hotel California of the evangelical Calvinista set, jumps on the “helping the abused in churches.

If you’ve been following this blog, you will know that I am not a fan of 9 Marks. I believe that their system for church membership leads to church abuse. I’ve documented that in numerous posts. Here are a few but do a search on 9 Marks at TWW and you will see a plethora of issues.

I’ve spoken directly with a well known personality in 9 Marks. He absolutely denies that their system leads to abuse. He claims that those which do abuse are merely not applying the precepts correctly. I contend that if Matt Chandler; the golden boy oof TGC,  got it wrong in the Karen Hinckley situation, there is little hope for anyone else getting it right. Instead, he told me I should write about all the wonderful churches getting it right.

Which ones? In the last few months, I spent time helping a West Coast person and an East Coast person (a highly respected professional) get out of their 9 Marks church which decided to play games with retroactive discipline. Usually, in these circumstances, this mean the folks wouldn’t kowtow to the arrogant pastors. Im currently involved in advising others on how to get out of their.church

So, I had a good, long laugh when I reads this article on the 9 Marks website: Some Counsel for Christians Leaving Toxic Church Environments. Talk about cognitive dissonance. Let’s see what they claim.

If you read the beginning of the article, they list some folks who left their churches. None of them were abused by the application of the Hotel California theology of 9 Marks.

To my left, a few of our members—who themselves had left a large church over their former pastor’s egregious moral failures—are praying over another couple who only now have come to reckon with those same discoveries.

In the midst of their *care* for the victims, they cannot help themselves. (Yes, this was written by one person but he is under the authority of the boyz.)

You must never leave your previous church for the wrong reasons.

You don’t want to leave simply because working through difficulties is too taxing.

…We want to receive the broken and the hurting but we don’t want to enable those who turn away from good churches simply because they’ve had a disagreement.

… Just make sure you have done your part to maintain unity

Good churches=those who do it the 9 Marks way. If it was such a church who caused your pain, I predict that they will reject you before you get in the door.

If you say too much about what happened before, you are a bitter person filled with malice.

Notice how this 9 Marks pastor utilizes the spiritualluy abusive terminology of bitterness, vengeance, malice.  They are telling you to shut up and don’t express your pain because it will upset them, especially if it involves one their churches.

This pastor is obviously poorly trained in the pain and suffering of those abused by churches. I would avoid him like the plague.

Others, however, may give in to the allure of “getting it off one’s chest” by bringing it up in nearly every conversation. These people are airing out their grievances, but often in a way that’s fueled by malice, vengeance, or bitterness.

Grow in your grief and *get over it.*

You better show you have hope.

Be prepared to bear the load of emotions that come with the separation. Over time, you’ll discover that anger can rise unexpectedly and take time to subside. You might feel abandonment when friends fail to contact you. You might feel like you’ve lost a family. Sincere believers at your new church will be sympathetic, but they likely won’t understand your situation fully.

…But, as with the loss of dear loved ones in the Lord, we grieve as those who have hope.

Dan Smith, pastor of United Church in Gallatin gets annoyed by a crying child: Facebook

The mother of the woman embarrassed by this outburst posted the following on Facebook.

My daughter and her friend walked out of United Church in Gallatin today after she was pointed out and embarrassed in front of a congregation. The baby in question was 15 months old and just made a peep. Was not crying. As you can see for yourself in this video. How can this pastor call himself a man of God and treat a member of your congregation that way and dont care if anyone is offended. I don’t know what is worse, the embarrassing of a member or the fact he did not care if he offended anyone. So sad in a society where we need to bring our young people to God and they are chased off because they have a young child. I’m sorry, but kids make some noise, And this wasn’t a noise that was distracting. Now, if she was crying, I can see a problem. My daughter was pretty upset and disappointed because she was looking for a church and found this one to be of her liking. Sadly enough, she is back on her quest to find a church that she can feel at home in and raise her baby with the word of God.

You will need to visit the Facebook page to view the video.

Read the comments about this outburst. In my opinion, this pastor was more concerned about himself. If he was upset, he could have quietly handled this after the service. My guess is that Pastor Smith has responded in other situations like similar fashion. 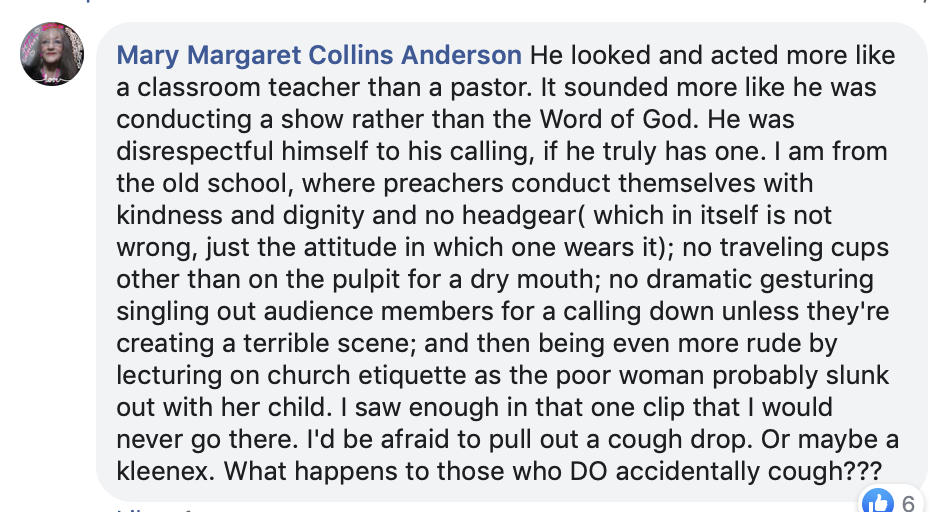 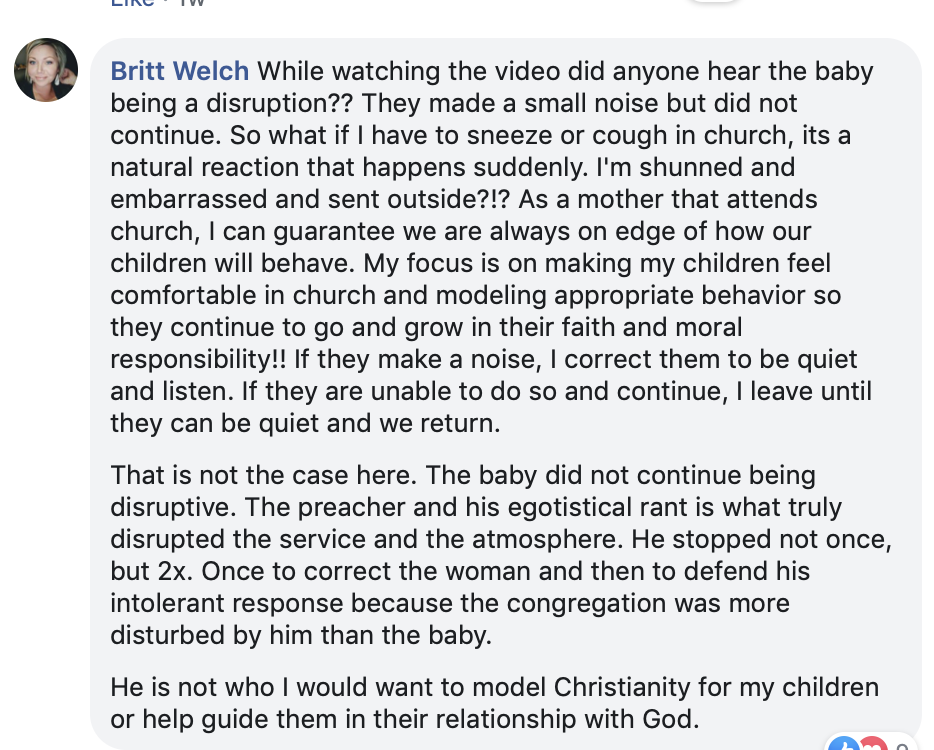 Several folks said she should not have brought her child to church. She could have sat in a outside and listened to the sermon over remote speakers.

I attended a church many years ago. After Abby’s surgeries, I used to sit outside, fearful she would have a seizure and upset everyone. But, I missed being in the church. One of the leaders approached me and encouraged me to bring her in to the church with me. He said people would be delighted to care for us, even if she had a seizure or was squirmy when she wasn’t feeling well. I am so grateful for their caring for me.

Of course, any child (or adult for that matter) who is screaming and not settling down should be taken outside the church doors and calmed down. I do not believe that such was the case in this instance.

By the way, my church has a glassed in room that is actually a part of the main church for parents with children that need help. The parents are part of what is going on. It’s a great idea. However, my church has lots of kids in the service and even has a children’s sermon. Last week, a little girl around 18 months or so, moved into the aisle next to me and proceeded to sway and hum with the music. I absolutely loved it.

So, there’s much to talk about here. I look forward to your comments.

Been on the receiving end of that one. https://t.co/pULSye5zuf
View on Twitter
0
2

Strachan is now trying to copyright "He who smelt it, dealt it." https://t.co/Gq0JLO5lJO
View on Twitter
1
0

4 KEYS TO A TRULY "INDEPENDENT" INVESTIGATION. @netgrace_org founder Boz Tchividjian @BozT overviews importance of investigation into reported cases of abuse where an accused institution does not control the investigators, process, findings or report. /1

"Southern Baptist Church Planting Up in 2020, But Baptisms Plunge by Half" 400,000 left last year. So think about it. Are the plants which cost a lot of money really addressing the problem? Sounds like a bad business decision to me.
https://t.co/PKpNYqPe8l
View on Twitter
0
2

"Southern Baptists Take Sides Ahead of Nashville Meeting" "A call to investigate the Executive Com over abuse responses is the latest issue up for debate. Opposing factions in the SBC both say its future is at stake" Sounds like a winner takes all event. . https://t.co/7r3wENlTML
View on Twitter
0
1