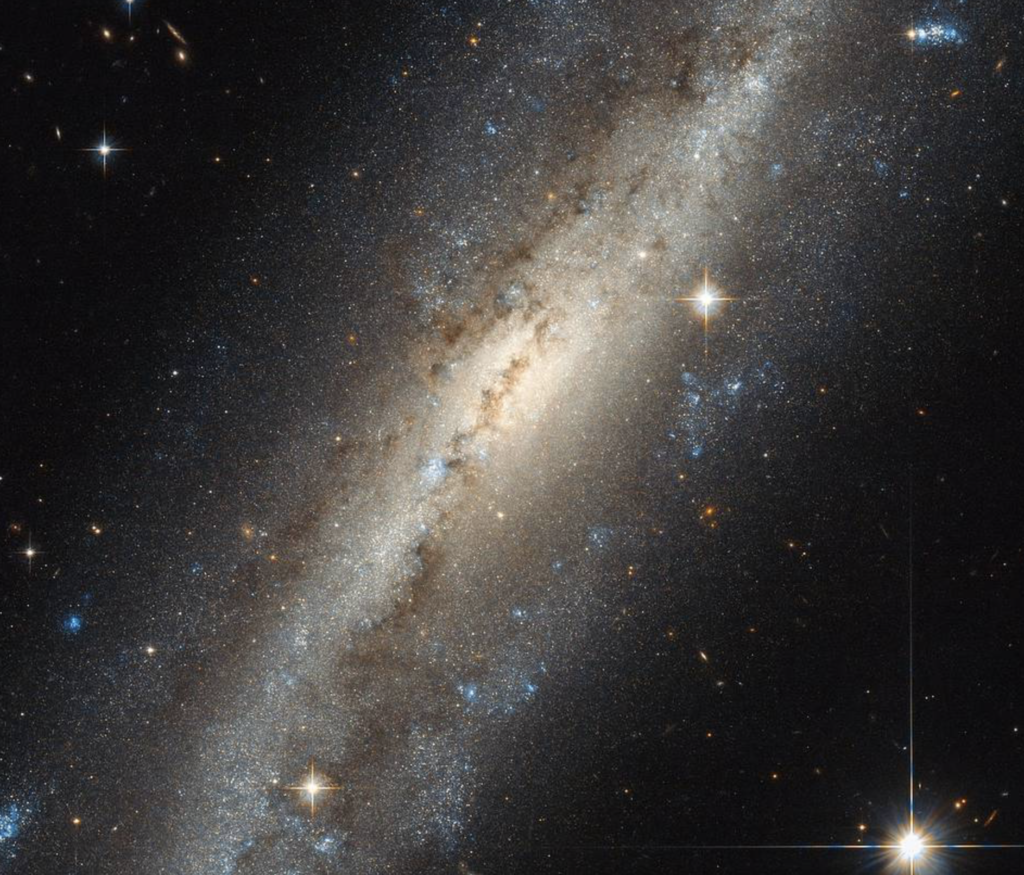 “Just going to church doesn’t make you a Christian any more than standing in your garage makes you a car.” G.K. Chesterton

Russell Meek was recently contacted by lawyers for Louisiana College who claim that he is *slandering* Louisiana College and must stop it. But this contact by said lawyers added a zinger which I have never seen before.

Meek, a professor at Louisiana College (LC), spoke out on a sermon given in chapel. Here is the quote from Wade’s website.

“On Thursday morning, still reeling from the sexual abuse uncovered by the Houston Chronicle and reported on Sunday, Monday, and Tuesday, I came to chapel at Louisiana College looking for a reprieve from the darkness swirling around the SBC. Instead, I was confronted head-on with the culture that makes such abuse possible.

Joshua Joy Dara, the dean of LC’s school of human behavior, delivered a message on relationships-fitting for Valentine’s Day. He offered sound advice to women about finding a godly spouse. Toward the end of his sermon, his language took an offensive and unbiblical turn. He addressed specifically the women in the chapel service, telling them to think of their bodies as houses. He then told them to “mow your lawn” and advised that if they were not getting attention from men, it was because they were “not taking care of your house.” He continued in this vein, at one point stating that women who have “let too many men” into their house are a crackhouse. Let that sink in – crackhouse.

In those final minutes of his sermon, Dara reduced women to physical objects who existed for a man’s pleasure. He then told them that if they had sex with too many men, they were not only valueless but indeed repulsive. A crackhouse.

This sermon has not been posted on LC’s YouTube channel, which houses dozens of other chapel messages, and those who have asked for a copy of the sermon, including the school’s Title IX coordinator, have been denied access to it. I -along with others at LC – expressed my concerns and the concerns of several of my students to the vice president for the integration of faith and learning. I was shocked that a dean at LC had presented such an unbiblical, false picture of women.

Let me say this clearly: no woman is a crackhouse. No woman exists for the pleasure of a man. No woman’s value is in her physical appearance. The Bible is very clear about this. In the poem of the valiant woman in Proverbs 31, the only thing said about beauty is that it is fleeting. Peter calls women to be beautiful on the inside rather than focusing on their outward appearance (1 Peter 1:3- 4). The Lord said to Samuel when he was seeking to anoint the next of Israel, “Do not look on his [Eliab’s] appearance or on the height of his stature, because I have rejected him. For the Lord sees not as man sees: man looks on the outward appearance, but the Lord looks on the heart.” (1 Samuel 16:7). Think even of our Lord Jesus Christ, who “had no beauty or majesty to attract us to him, nothing in his appearance that we should desire him” (Isa 53: 2). When Jesus encountered the woman at the well, did he call her a crackhouse? No, he gave her living water.

Dara wrote an apology that was emailed to the faculty, staff, and student body. In it, he apologized for “the tone” of his sermon, expressed gratitude that it was brought to his attention, and ended by saying, “I’ll be sure to weigh my warped sense of humor against my sense of propriety and choose something that isn’t controversial. ” I am thankful for Dara’s apology, but it still troubled me that he did not address the misogynistic view of women in his sermon.

The administration seemed more concerned about the image of the college than they did about the feelings of students, especially women, who heard this chapel presentation.

Meek was so concerned about what was said in chapel that he wrote President Brewer to express his concerns. This resulted in a meeting involving”

Those of you who have watched similar scenarios play out in various churches will not be surprised at what happened next.

*You are hurting the institution.*

This is typical, ho hum baloney. Jesus didn’t emphasize defending institutions. In fact, He got downright ornery with certain institutions like the Pharisees whom he called *snakes.* He cared about individuals. Meek, a professor, emulated Jesus by expressing his concerns for the feelings of the students.

As astute readers of this blog know, libel/slander involves an individual knowingly telling a lie. It is obvious to me that Meek was simply expressing his own views of what he believed was said. I can assure you that the college’s attorney, who must be a smart man, knows this. So, I believe this is being said to attempt to scare Meek into submission.

“This (Russ’s email above)  has already been reviewed by our attorney. He says it’s actionable. It’s libelous. It’s slanderous. It’s defamatory, and it’s inflammatory. And by the way, you’re taking on one of the most powerful, if not one of the Top Five most powerful people, in Central Louisiana. Not me, Joshua Dara. He’s an attorney as well, Russ. He’s got a strong legal mind.”

Meek bravely reiterates his concerns and beliefs about what was said, showing he cares for the little guy more than for himself.

“I’m concerned for the women who think that what Dr. Dara said is true. Their identity is not found in how many sexual partners they’ve had.  My concern is for the women who think, ‘I’ve had sex with a lot of guys.’ Is she a crackhouse? I have a family member who was molested as a child by multiple people in her family. Is she a crackhouse? Is her identity bound up in how many sexual partners she’s had? If men don’t pursue a woman is it because the woman is ugly? He said if your phones aren’t ringing It’s because you’re not getting taking care of your house. Dr. Brewer, women are made in God’s image. This is a fundamental gospel issue. Who humans are. I’m not mad; I’m grieved.  If I had a daughter I would be horrified to know that she was being told these things about herself.”

Louisiana College administrators canceled the scheduled April 2019 conference entitled “What is a Woman Worth?” – a conference that was to be led by Dr. Meek – and refused to reschedule it for later in the semester.

Meek is a prolific writer and has found a number of employment opportunities. He even published a book. 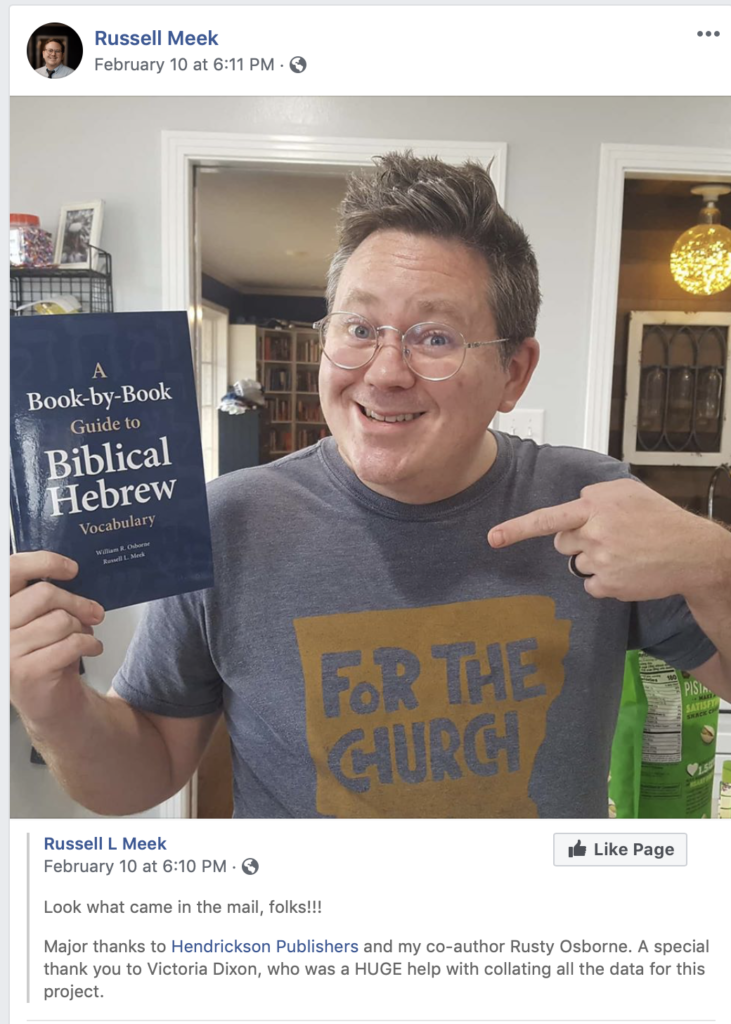 He owns an editing service. 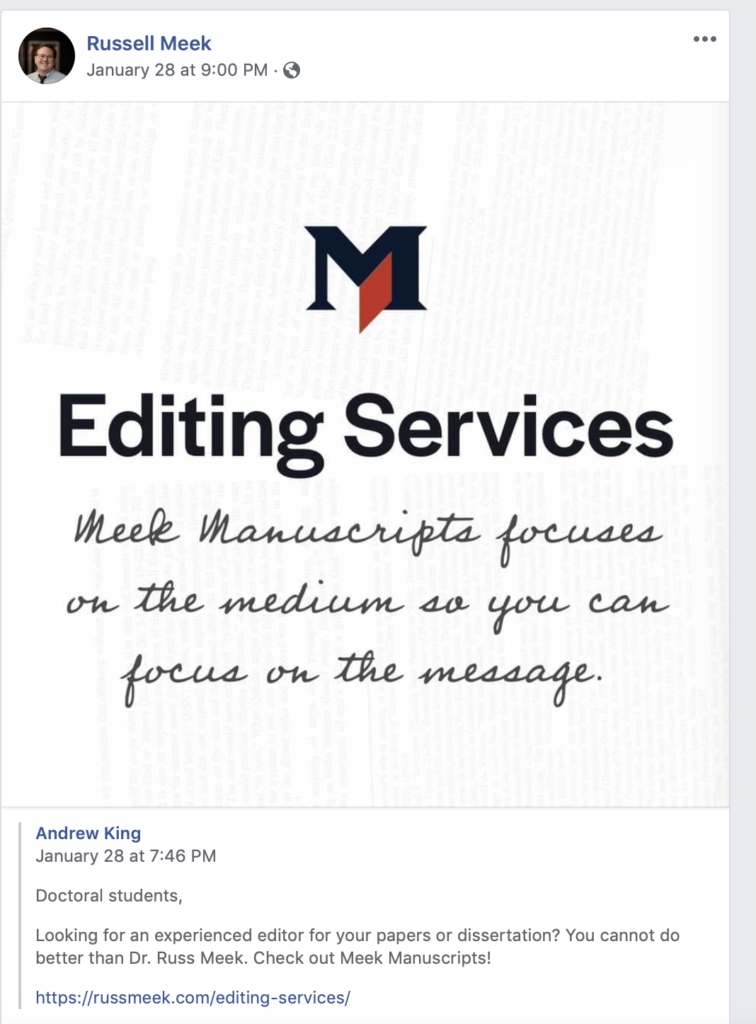 He has written for Religion News Services.

He’s a really good writer, b y the way!

Earlier this month, Robert Oscar Lopez, a professor at Southwestern Baptist Theological Seminary, released a statement announcing his own firing, which he attributed to the SWBTS administration’s dissatisfaction with his vocal opposition to sexual abuse within the Southern Baptist Convention, specifically abuse of men by male pastors and other church officials.

Lopez’s allegation is unlikely, and only gets more unlikely as you listen to his theories about the SBC’s supposed capitulation to the idea that same-sex attraction is innate, or that he was done in by a conspiracy between the LGBTQ community and the SBC. In his mind, it was his own hard line on homosexuality — which he believes is caused by trauma or indoctrination — that provided further grounds for dismissal.

He is a lecturer in Old Testament and Hebrew at Ohio Theological Institute.

Ohio Theological Institute aims to transform Northeast Ohio through theological training for vocational and lay ministers and church leaders that is local, affordable, and flexible. The planned pilot launch is scheduled for August 2019 with a certificate program that will allow matriculation into extended accredited degree programs. Ohio Theological Institute exists to cultivate humble orthodoxy through theological education in life together for Christ, His Church, and His mission in the ecclesial community of Northeast Ohio.

He wrote an important article at Red Letter Christians on Matthew 18.

How the Misuse of Matthew 18 Bullies Abuse Survivors Into Silence

Matthew 18 does not apply in every single case of sexual abuse I’ve ever heard of. While sexual abuse is typically a private, personal sin committed by one person against another, it is also an intentional, criminal act. Further, innocence and not guilt is the typical presumption, and churches rarely carry the process through to excommunication. Instead, the abuse survivor is typically not believed, told to remain silent, and/or gaslighted. Rather than confront the accused, folks tend to defend the accused: “Pastor Doe couldn’t have done that!”

Since resigning from the Baptist college where I heard women compared to crack houses, I’ve waded into the world of advocacy for sexual abuse survivors. And I’ve found, to my shame and chagrin, that the school’s misuse of Matthew 18 is far from unusual.

Matthew 18:15-17 contains the words of Christ to his church, instructing us on how to deal with internal conflict with a brother or sister who sins against us and doesn’t know it. It’s appropriate to follow that model in that situation, but it’s inadequate — and becomes itself a tool for abuse — when it is used to bully abuse survivors into silence.

Meeks has been asked to write articles for other websites like SBC Voices. In other words, he is getting around and the sad, sad story of his encounter with the powers that be at Louisiana College has become known. People are asking why this decent man was treated so poorly that he resigned.

Russell Meek is busier than ever and this apparently irritates Louisiana College which has hired some lawyer to threaten Meek with a zinger!

He apparently got a lawyer’s letter instructing him to cease and desist along with a zinger. Your humble blog queen has had a few of those in her history. But, I always tell what I believe to be true and link liberally to explain why I’ve drawn such conclusions. Always telling what one believes to be true is a defense against accusations of libel, defamation, etc. That is the law in the United States

I told my husband that I wanted him to put this on my tombstone. “She had some really good links.”

Most bloggers that I know are petrified of lawsuits and do their darnedest to tell the truth as they believe it to be. In my conversations with Russ, I am convinced that he is a truth teller and I respect his honesty.

So, what is being alleged?  At this time, it would not be wise to post the letter. Russ is taking this under advisement, if you get my drift. Here are the two major points. The second point is the zinger.

They appear to claim that his writing is slander, libel, etc. This is just the typical boilerplate lawyer baloney. I stand behind Russ, believing that he is honest. I do not believe that they will ever get this poppycock to stick. There s a reason that defamation lawsuits usually lose. Google it. 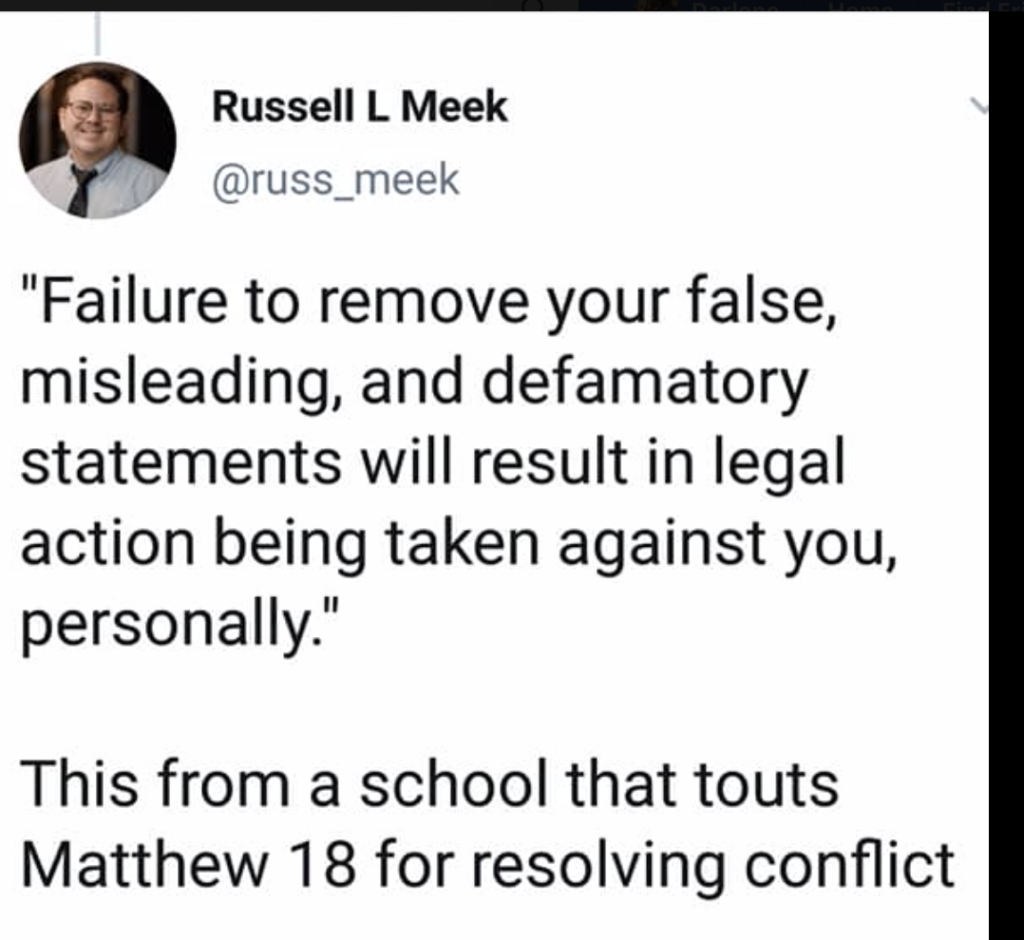 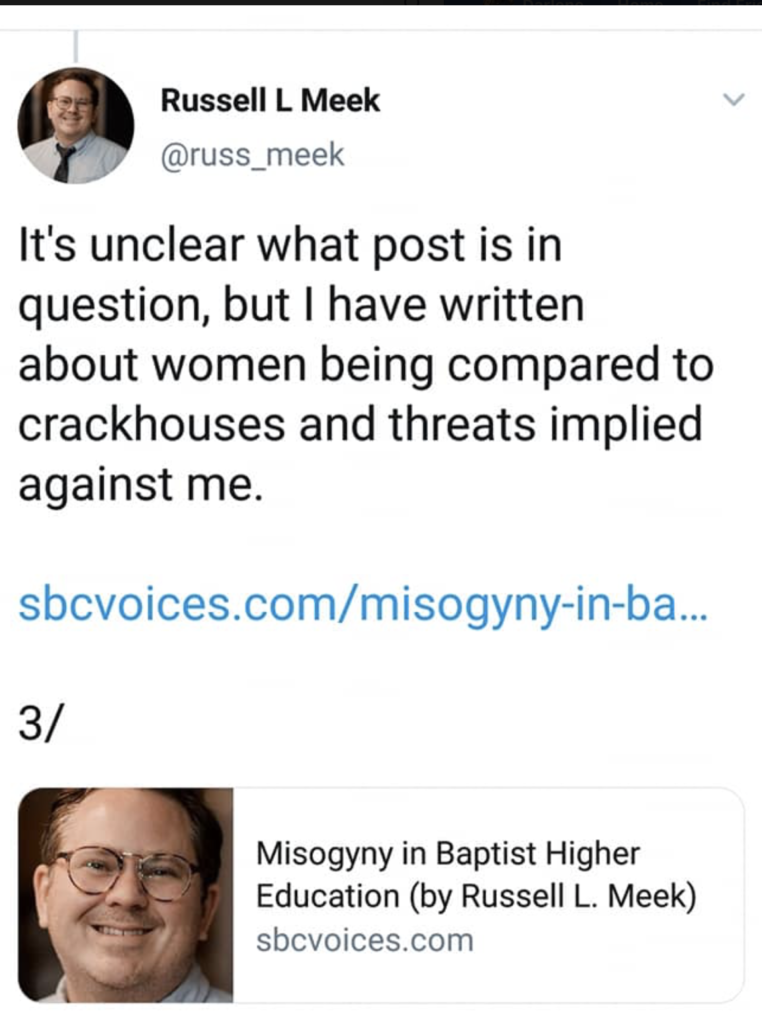 2. Here is the zinger. The lawyer is threatening to call Meeks’ employers and title tattle on him…Ummm, this could be problematic for LC and the boys. 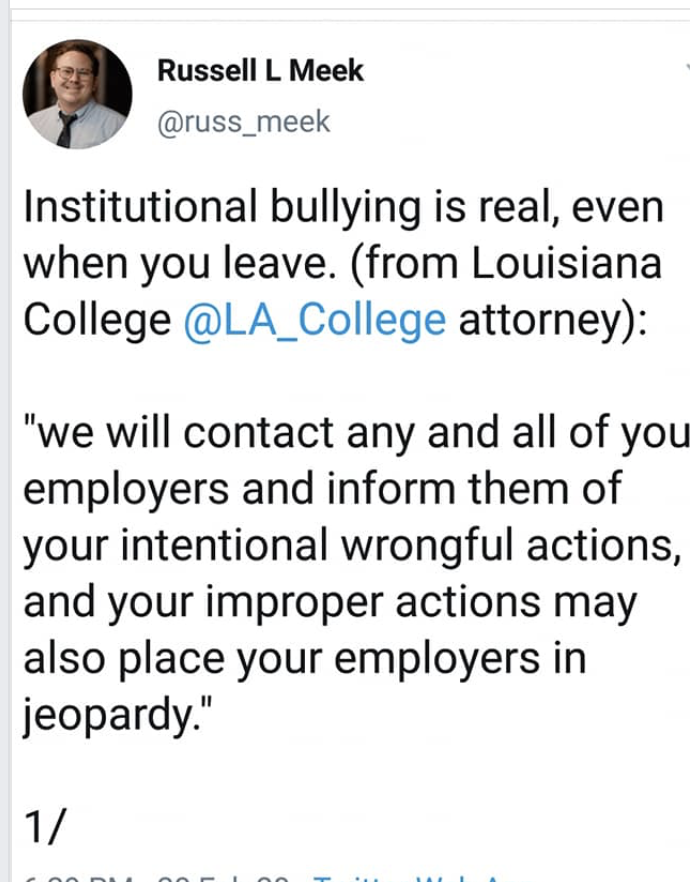