"It's like you always have to put on a happy face, be the phony baloney, and I'm so not that. I never was that; I'll never be that. That is part of the business that I don't like. Maybe that will always keep me an outsider, I don't know. But that's fine." Chloe Sevigny link 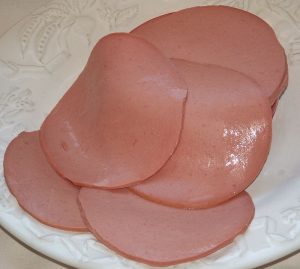 There are a few things that have me curious about Pete Wilson's resignation from Cross Point Church for what is being called *burnout.* I think it is important to look at this because now social media is producing post after post about pastors and burnout here and here.

Here is Wilson's statement to his church.The church emphasized that they did not ask Wilson to leave.

(I bolded a few things in this release.)

"We have a community here at Cross Point where everyone’s welcome because nobody’s perfect and we really believe that anything’s possible. We believe that. And it’s been my priority, what I’ve been focused on for the past 14 years: creating a community like that. In the meantime, I haven’t prioritized some other things that were equally as important. Leaders who lead on empty don’t lead well. For some time, I’ve been leading on empty.

I think the best thing for Cross Point is for me to step aside. And so I’m resigning as the pastor of Cross Point. I can’t thank you all enough for trusting me, for allowing me to be a part of your lives. You’ve trusted me in some very intimate moments—from the loss of loved ones to your weddings to praying with you for healing or for your marriage or for the child you long for—so thank you for allowing me to be a part of those journeys with you.

I believe the best days of this church are ahead, and I believe that more today than I ever have. I believe God has a really, really important role for this church to play in our world. So, do good. Be kind. Take risks. More than anything else that we’ve hoped and prayed for here, it’s that the unloved would feel loved.

Here are the points that jumped out at me.

1. He created a community in which people could be imperfect by he didn't prioritize other things in his life.
2. He was running on empty.
3. He's tired, broken and in need of rest.
4. He didn't say anything specific.

So now he is resting after being hired as the president of A Group just 3 weeks after his resignation from the church? Really?

So, a few weeks after he described himself as broken, tired and in need of rest, he is going to counsel other pastors? Wut?

Here is the announcement: The A Group Welcomes Pete Wilson!

Today, Pete Wilson, author, speaker and former pastor of Cross Point Church in Nashville, TN is joining our team as our new President.

I have known Pete for many years and served on Cross Point’s Board during its first 12 years. As Pete was going through his own discovery journey for the next chapter in his career, I was contemplating The A Group’s future, and how we could best serve our clients. In a series of events that could only be described as “divine intervention,” both stories came together and a new chapter is being written.

I founded The A Group almost 15 years ago, seeing a need to offer churches, ministries and non profits excellent marketing and technology services from people who understood their unique challenges. As The A Group grows and continues to serve organizations in the ever-changing world of technology, faith and culture, I realized that it was time for us to offer a fresh perspective and experience that can only come from recent service in ministry. Pete is the perfect person for that job.

I know Pete’s heart for ministry, as well as the deep knowledge and wisdom he has acquired during his time leading large, growing organizations. Being able to offer his invaluable experience and counsel to other leaders is an honor.

Nearly every client that comes to us is asking the same questions: how do we reach the next generation? How do we grow in an increasingly secular world? How do we adopt new technology and adapt to a new culture without losing our hearts? Pete has navigated that world with incredible wisdom and success, creating a growing, thriving church that reaches across generations. He has invaluable experience and encouragement to offer other leaders who are facing those same challenges.

Ultimately this partnership will bring new perspective, creativity and leadership to our clients as well to our internal team. I can’t tell you how excited I am to have Pete as a part of The A Group!

Here is part of Wilson's announcement at The A Group: A New Chapter

As most of you know, over 3 weeks ago I resigned as the Senior Pastor of Cross Point Church after having started and led the church for 14 years. It was one of the most difficult decisions of my life. I love that church and absolutely everything it stands for. I have years of incredible memories and hundreds of experiences I’ll never forget. I’ll be forever grateful that so many trusted me enough to allow me to be a small part of their life story.

The decision may have seemed quick to some, but I can attest to the fact that it was not. For some time now I’ve felt this general feeling that I was out of season. That it was time for something different.

…I’ve accepted a position as the President of The A Group; a Nashville-based nonprofit/church marketing agency, geared towards partnering with churches, nonprofits, ministries and faith based organizations to increase their impact. I have known Maurilio Amorim, the CEO, since I was a kid and The A Group has been a great marketing and technology partner of Cross Point since day one.

My focus will be to take the lessons I’ve learned in the past 20 years of ministry and leadership and help other pastors and ministries navigate the often unpredictable and challenging waters of ministry.

… I now have the honor of taking all I’ve learned in my time there, and partnering with hundreds of churches and ministries to help them reach their full potential.

It is interesting to note that Wilson has been friends with Maurilio since he was a kid. He also hired Maurilio's' group to help Cross Point while he was a pastor.

What in the world did he mean by broken and how was that cured in 3 weeks?

Christian lingo is often difficult to figure out. Nonetheless, a person who is functioning on empty and is broken is not in a good place. Something is really, really wrong. How does that go away enough after only 3 weeks so that he can counsel other pastors how to do *be successful?*

Dino Rizzo of the ARC shows up to bolster the morale of Cross Point in the wake of Wilson's resignation.

As you may know, Cross Point is a member of the ARC of which Robert Morris, Chris Hodges and Dino Rizzo are leaders. You have never heard of them? You should get to know them because the Arc is planting more churches in the US than any other group. You can read about them here. If you put the word *ARC* in our search engine, you will be able to read about some of the odd beliefs in this group of churches.

Now having Dino Rizzo counsel Cross Point Church is interesting. You see, Dino Rizzo was involved in a rather awkward situation in which he allegedly kept a mistress in a townhouse while he was in charge of The Healing Place and married. You can read the whole story here: Dino Rizzo, Stovall Weems, and Steven Furtick: Banking on the ARC? See if you can find anything interesting in the resignation of Rizzo that reminds you of the Wilson resignation.

So what's the deal with Dino? He is no longer at the church he founded, Healing Place Church (HPC) in Baton Rouge, Louisiana. Sometime in the summer of 2012, Rizzo stepped down from his pastorate and the reasons given for this move are a bit sketchy. Here is a report from Charisma News.

"I have not felt myself, spiritually, physically or emotionally for several months now,” says Rizzo, senior pastor of Healing Place Church. "My physically exhausted, spiritually depleted state has affected my decision-making, my family life and my ability to lead effectively."

The Rizzos took a leave of absence in late July at the behest of the church’s spirituality board because they needed “a sabbatical rest for healing, reflection and restoration of spirit, soul and body,” according to a statement from the board…

The Christian Post chimed in with this. Look carefully at the last two paragraphs. The Healing Place has "overseers?"

Rizzo told the congregation on Sunday, according to The Advocate, that he has "needed a lot of mercy and a lot of grace" over the last couple of months. "To those I have disappointed, I want to say forgive me. I'm sorry if I've ever disappointed you as pastor."

Though many in the church were shocked, Chris Hodges,(ed. note:pastor of the Highlands in Birmingham) one of Healing Place Church's overseers, indicated to the congregation that no additional details would be given about the Rizzos.

After a nice rest, Rizzo was hired on to work with Chris Hodges at The Church of the Highlands. Rizzo was the one sent to console Cross Point. Either it was deliberate or no one thought about what certain bloggers who watch this stuff might think. 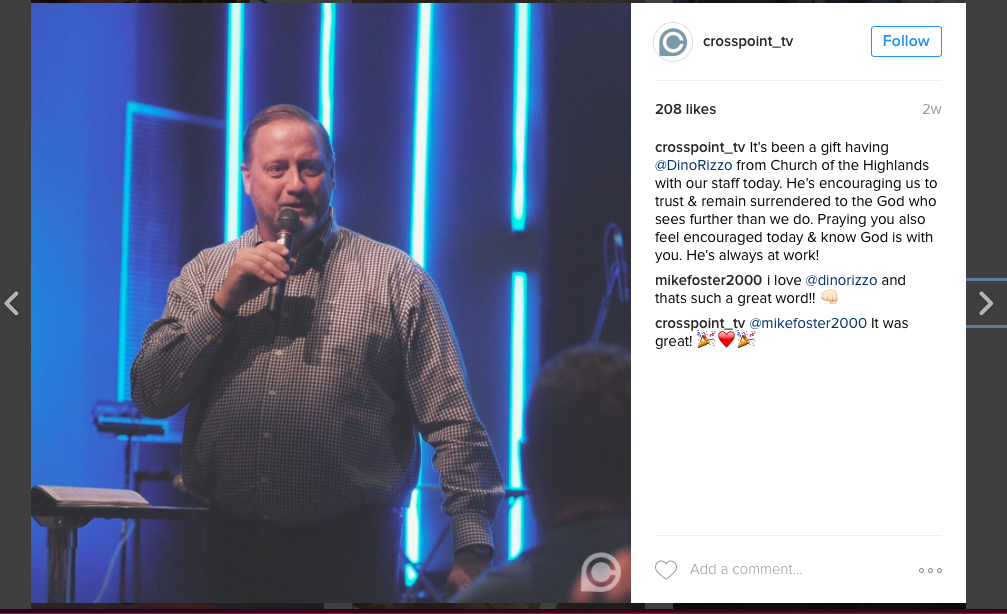 Where is Brandi Wilson?

Brandi, Pete Wilson's wife, was very involved in both the ministry at Cross Point as well as her own ministry, Leading and Loving It. According to their website, it is a ministry that focuses on helping pastors' wives and women in ministry.

According to their website, they are having a Retreat at the end of October in Las Vegas.  A couple of months ago, Brandi was slated to be one of the main speakers. See the promo below. (She is in the top middle row.) 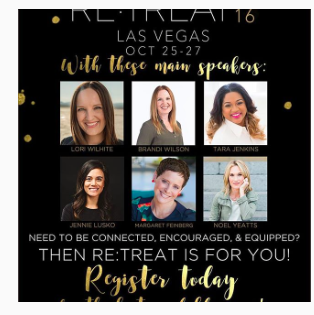 Now, take a look at who the speakers are in this later promo. Where is Brandi? This is her organization. 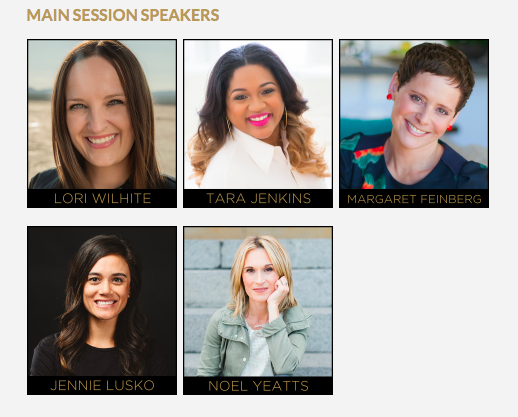 Since the A Group is located in Brentwood, TN, which is only 25 miles from Nashville, we are not talking about some cross country move. So what is really going on? Knowing the ARC, they won't be talking since we need to "trust the leaders."

I believe that the *whole* story has yet to be told because a broken, burned out, exhausted pastor looking for rest and healing does not take on the role of president in a business after a 3 week hiatus. Heck, if that's all he needed, the church could have given him the month off. This burned out stuff appears to be an excuse for something else. What that is, I'll leave up to you.