"Perry Noble’s book on dealing with depression contains not a single reference or acknowledgement to his decision to take antidepressant drugs." 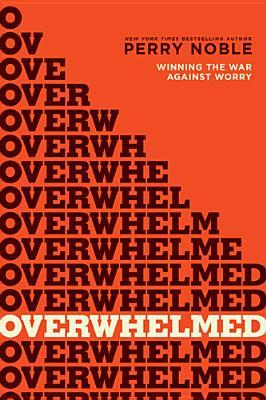 No Foolin' – Perry Noble's latest book Overwhelmed has a publication date of April 1, 2014. So who is Perry Noble?  According to his bio on Amazon:

Perry Noble is the founding and senior pastor of NewSpring Church in South Carolina. The church averages more than 32,000 people during weekend services at multiple campuses across the state.

Perry is a gifted communicator and teacher, convicted about speaking the truth as plainly as possible. God has given him a vision and a passion for helping people meet Jesus, and each week he shares God's word and its practical application in our daily lives.

His first book, Unleash! was a New York Times Best Seller and has helped many people learn how to break free from normalcy. His latest book, Overwhelmed tells his personal story of his battle with depression and how people can find hope in a world that feels hopeless.

The back cover of the book includes the following:

Perry Noble has stood at the edge of the abyss himself, and in Overwhelmed, he shares the keys to unlocking the chains of anxiety and despair once and for all. Building on the premise that everything changes when we shift our focus from our circumstances to Christ, Perry walks readers through a life-altering plan for overcoming stress, worry, depression, and anxiety so we can be free to embrace the abundant, joy-filled lives we were created for.

Now if there was anyone who should have felt 'overwhelmed', it would have been Dr. James Duncan, who blogs at Pajama Pages and lives and works not far from NewSpring Church.  Around the time that we launched TWW, Dr. Duncan began blogging about NewSpring.  If you have never read Dr. Duncan's testimony Holy Rage at the Spring, please be sure to do so.  He and his family suffered terribly at the hands of 'Christians' who were associated with Perry Noble's church.  Dr. Duncan sued the church and received an undisclosed settlement.  Our friend Tom Rich also wrote about James Duncan's horrific experience.

Dr. Duncan, who is a professor of communications at Anderson University, went silent for several years, but now he's B-A-C-K!!!

He is greatly disturbed by the advice Perry Noble gives in his new book Overwhelmed and has written a post explaining his grave concerns.  With the release of Noble's book less than a week away, we hope you will take the time to read Dr. Duncan's review, which he has given us permission to publish here at TWW.

Perry Noble has garnered himself a lot of positive press lately for his acknowledgement that he takes antidepressants to deal with his long-term depression. I assumed that the antidepressant news was a teaser for a more detailed account of his decision in the book. 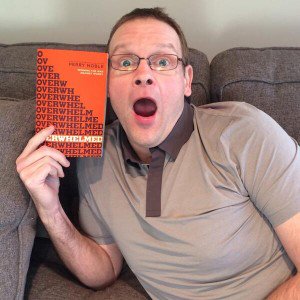 Perry Noble’s book on dealing with depression contains not a single reference or acknowledgement to his decision to take antidepressant drugs. Amazon’s “Look Inside” feature allows you to read excerpts from Noble’s book, though it also lets you do word searches on the entire text, and shows a sentence or two surrounding those words. I did searches for words like antidepressant, depression, medicine, prescription, doctor and found nothing that indicated that Noble either considered or decided to start taking prescription medicine for his depression.

This is an astonishing omission, especially knowing that Noble suffered severe depressive episodes while he was writing the book that necessitated consultations with his doctor who prescribed the pharmaceutical help that he needed.

Here’s what he said in his blog post, with emphasis added:

As I began the writing process the feelings of anxiety and worry began to slowly slither back into my life like a snake sneaking up on it’s prey. I remember writing a chapter in the book, driving home and having a panic attack in my living room.

About three days later I took my daughter to a restaurant for lunch and found myself feeling like I could not breathe and that the walls were closing in on me.

What was going on?

I thought I was done with this, that I had whipped it and that I was going to be able to tell my story and inspire other people to do the same.

But…that wasn’t the case.  Anxiety was a fight, and I was losing.

I called my doctor and we had a long talk about my options.  He spoke to me honestly and openly about anti-depressants.  When he first mentioned them I blew him off; after all, I had defeated this one time without the “drugs for weaklings” and figured I could do it again.

However, the anxiety in my life continued to increase to such an extent that I distinctly remember calling him one afternoon and telling him I could not take it anymore and that I needed something to help me.

I can honestly say that making the decision to take an anti-depressant during this time period in my life has been one of THE BEST decisions I have ever made.

It is obvious from this account that Noble began taking the antidepressants while he was writing the book. His depressive episodes were worsening as he was giving advice on how to deal with them. As I’ve said before, I’m glad that Noble is getting professional medical help, so my criticism is not of him or others who rely on medication for mental health issues. The problem is that he hides the ultimate source of his help from readers of his book, and that is profoundly dishonest. How can he accept money from needy readers who expect his book to help them through their own depression when one of “THE BEST” decisions he has ever made is kept from them?

Not only that, but the advice in the book directly contradicts Noble’s actions and words. Compare:

The book seems blissfully unaware of Noble’s actual life, though so does his recent preaching. NewSpring’s summary of his sermon last Sunday taught that “Healing will never be found in another … pill, ” yet his antidepressent blog announcement touted the healing power of pills:

[If] you went to the doctor and he said, “here is a pill you can take to fix the problem,” you would be considered negligent and insane for not taking the medicine…. If you would take a pill to cure the liver then why would you not do the same for the brain?

What makes Overwhelmed especially dishonest is that it’s based on Noble’s personal experience, so it doesn’t claim to be an objective or scholarly evaluation of the spiritual, physical and psychological aspects of depression. He tells us, “After a lot of prayer I decided to write a book about my battle and what I learned about Jesus and His faithfulness.”

Here’s the thing. Even while Noble was thinking most intently and clearly about what he understands about Jesus and his faithfulness as it relates to depression, that very thinking was insufficient to keep him stable. When you write a biographical advice book, the reader ought to be able to assume that the advice actually worked for the author. In Noble’s case, it didn’t, yet he, his church, his publisher and his famous friends continue to promote it as a life-changing book. For example, Noble quotes Brian Houston’s endorsement of the book:

My friend, Perry Noble, shares his honest struggle and ultimate victory over his battle with depression and anxiety; and I believe that because of his story, because of his relationship with Christ and because of the grace of God, you can see these principles bring freedom to every area of your life.

Perry Noble speaks openly and honestly about his battle with depression and how it IS possible to overcome in his book Overwhelmed. I’ve known Perry for some time and appreciate his willingness to be so open and honest in order to help see people find hope.

Maybe Houston and Batterson don’t know that their praise is based on an incomplete truth, but Noble does. The advice in the book did not bring Noble victory over depression, which means that the principles in it are unlikely to bring anyone else freedom, either.

As part of his antidepressant blog post, Noble talks about how he sometimes felt suicidal, which means that he is intentionally marketing his story to other people who are suffering from similar self-destructive impulses. That’s not something you take lightly. We’re talking about life and death, yet he is inviting them to pay him for advice that he knows doesn’t work. By Noble’s own standards, that’s not just insane, it’s negligent.

In the last few weeks we’ve been dealing with publishing scandals that focused on actions that wasted a lot of money inflating pastors’ egos and bank accounts. Overwhelmed is a publishing scandal of a higher order, though. Noble and his publishers are selling advice that they know is incomplete and ineffective, and they’re marketing it to people who are potentially suicidal. This is a book that can kill.

Noble ought to recall the book from stores and refuse to offer it for sale until he rewrites it to address the helpful role of medicine or adds a warning label to the cover. Something like,

This book may be hazardous to your health, as it was to its author. If this advice doesn’t work for you, as is likely, you should consult a medical professional who is qualified to help you.