Today I turn the spotlight on “The River Church,” a Charismatic church that, as far as I can tell, is an independent/non-affiliated church located in Kimball Township, Michigan. 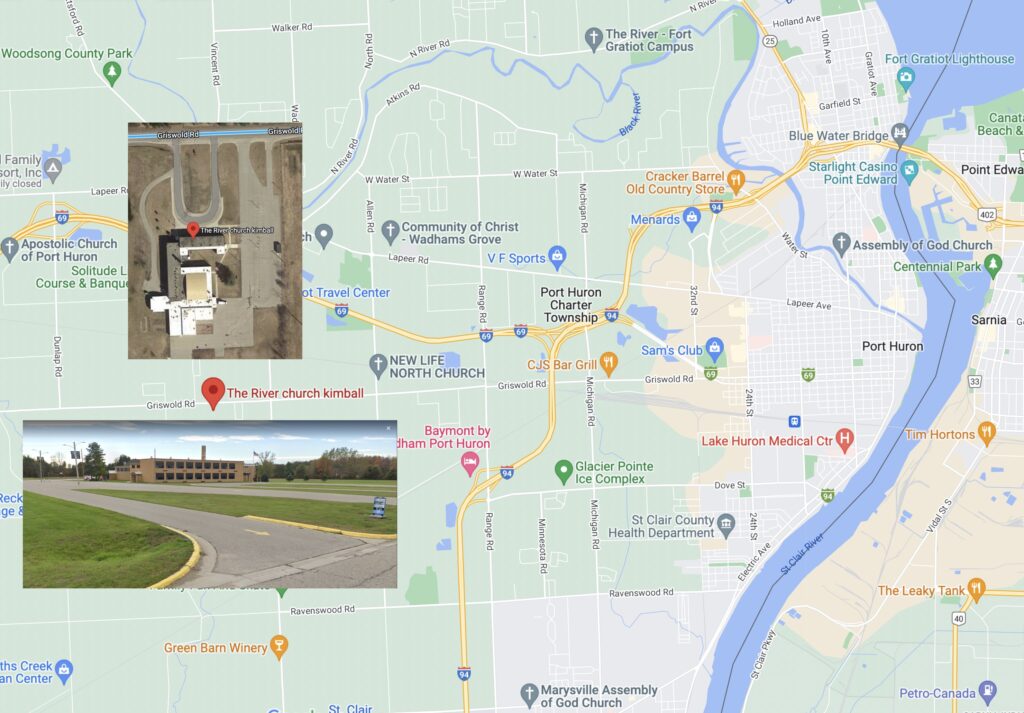 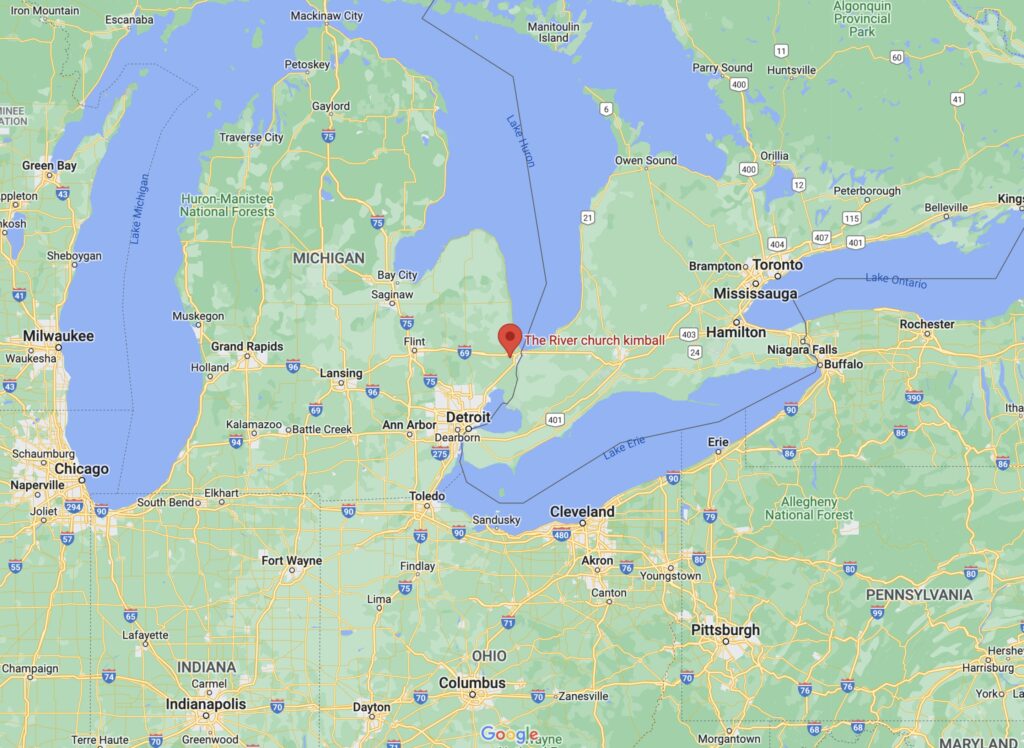 From photos above, it appears The River Church meets in a former school building. Co-lead pastors were husband and wife Bill and Kim Wahl, although in recent days the website no longer lists Kim Wahl as a pastor. Below is a screenshot from The River Church’s website in 2021. For some reason the photos of Kim Wahl and Stefan Wahl did not appear on this saved document from The Wayback Machine.

Stefan Wahl is the son of Bill and Kim Wahl. Stefan’s full name is William Stefan Wahl. He is named after his dad, Bill (William), but goes by the name Stefan. More on Stefan shortly.

The Wahl family lived in Monroe, LA from approximately 2002-2012. While there, Bill Wahl worked as Executive Pastor and Student Ministries Pastor at House of Prayer International Church. The International House of Prayer in Kansas City is somewhat infamous and I wondered if the church in West Monroe was in the same movement. From what I could find, I believe they are – the names seem interchangeable. Whether my information on this point is correct or not is not important. Suffice it to say that the church in West Monroe is Charismatic.  From Monroe, the Wahl family moved back to Michigan, which is where Bill is originally from. 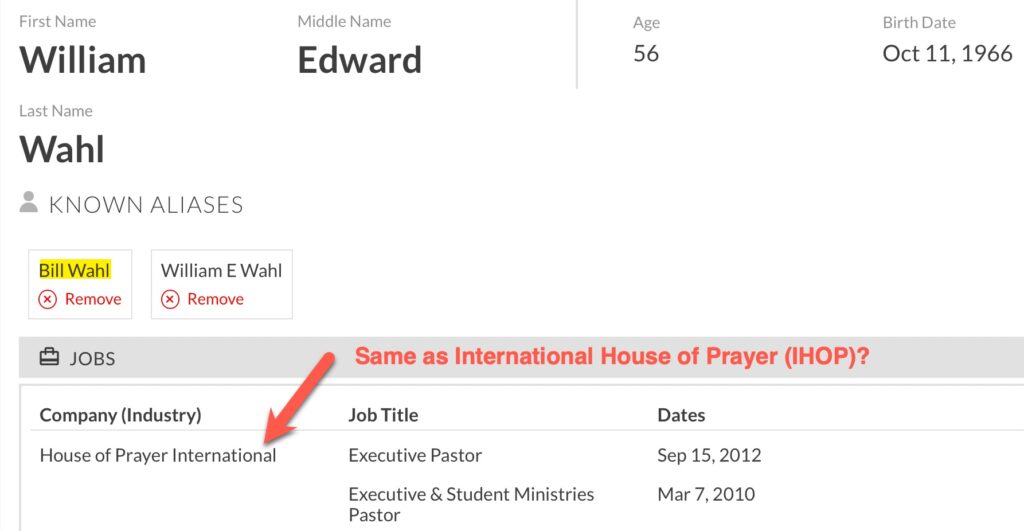 “Bishop” Bill Wahl and his wife, Kim were back in Monroe in 2015 to do some ministry work. The Bishop was preaching and Kim was “ministering in song.” BTW, Kim has a wonderful voice. In researching this story I listened to some church services from The River Church. Kim was leading the worship team and has a lovely voice. (There were also some recordings of her sermons.) 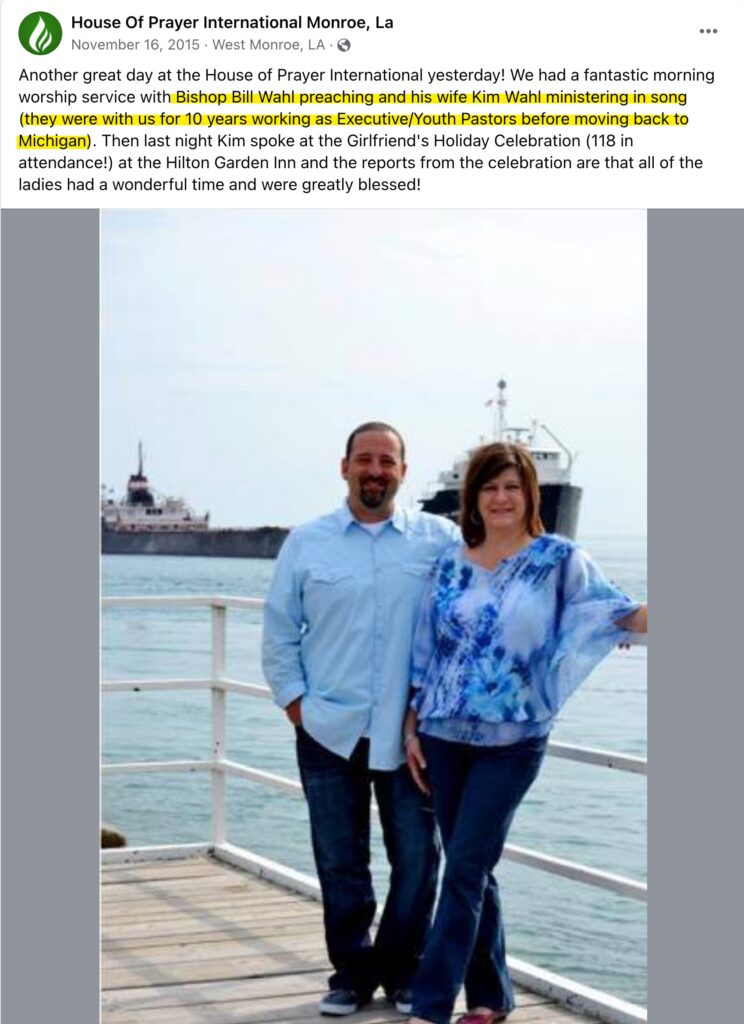 With this background news, I now move on to what caused me to write about The River Church. On Friday, January 21, 2022, Stefan Wahl was arrested and charged with sexual assault of 4 victims. Two of the victims were children under the age of 13.

Here is a video of Bill Wahl addressing The River Church on January 23, 2022 – two days after his son and Student Pastor, Stefan Wahl was arrested.

Below are 3 of the pages from the court case against Stefan Wahl.  He was found guilty on 7 charges. He was sentenced on August 3, 2022 to a minimum of 5 years and a maximum of 15 years on counts 1-6. These counts run concurrently. Count 7 runs consecutively, that is, added on to counts 1-6 and the term for count 7 is 16 months minimum and 2 years maximum. 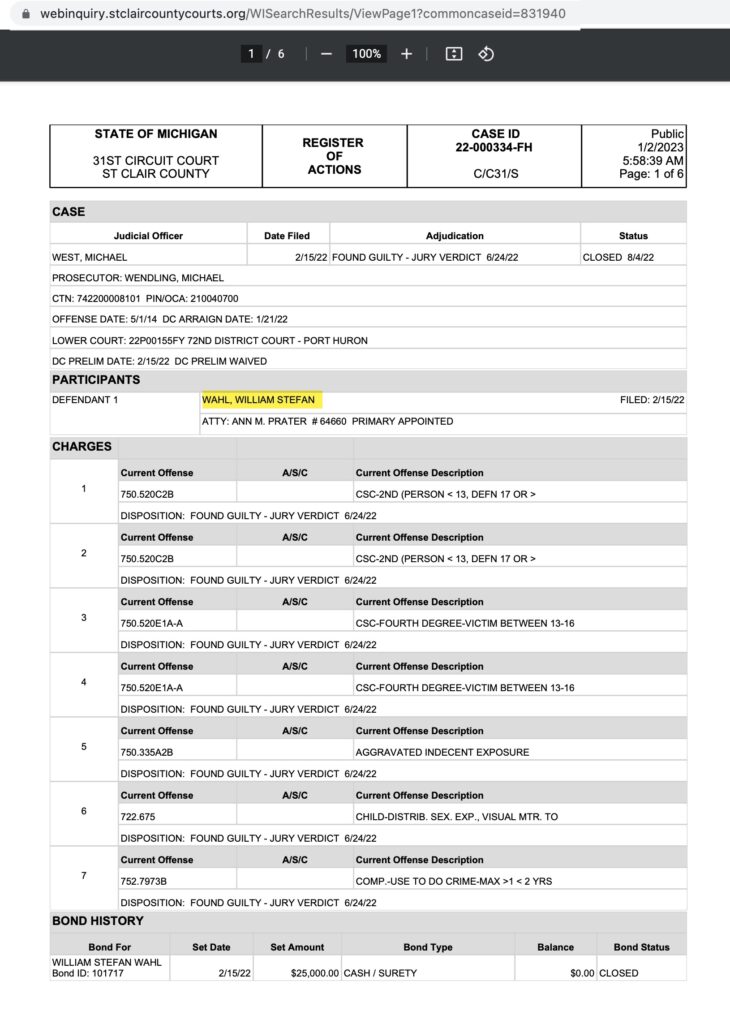 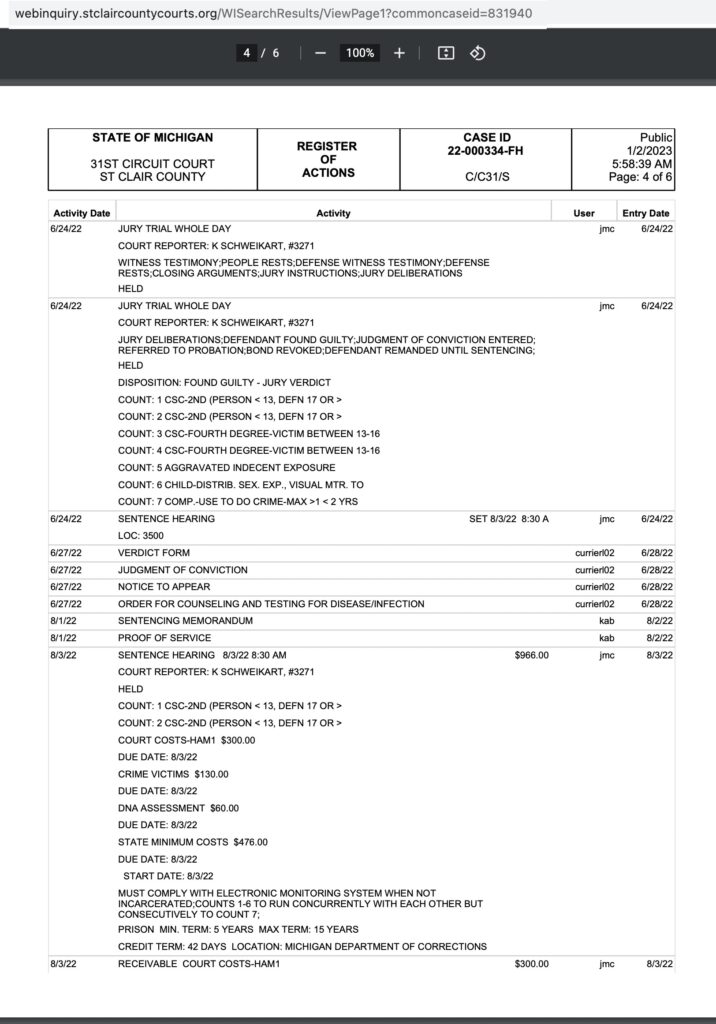 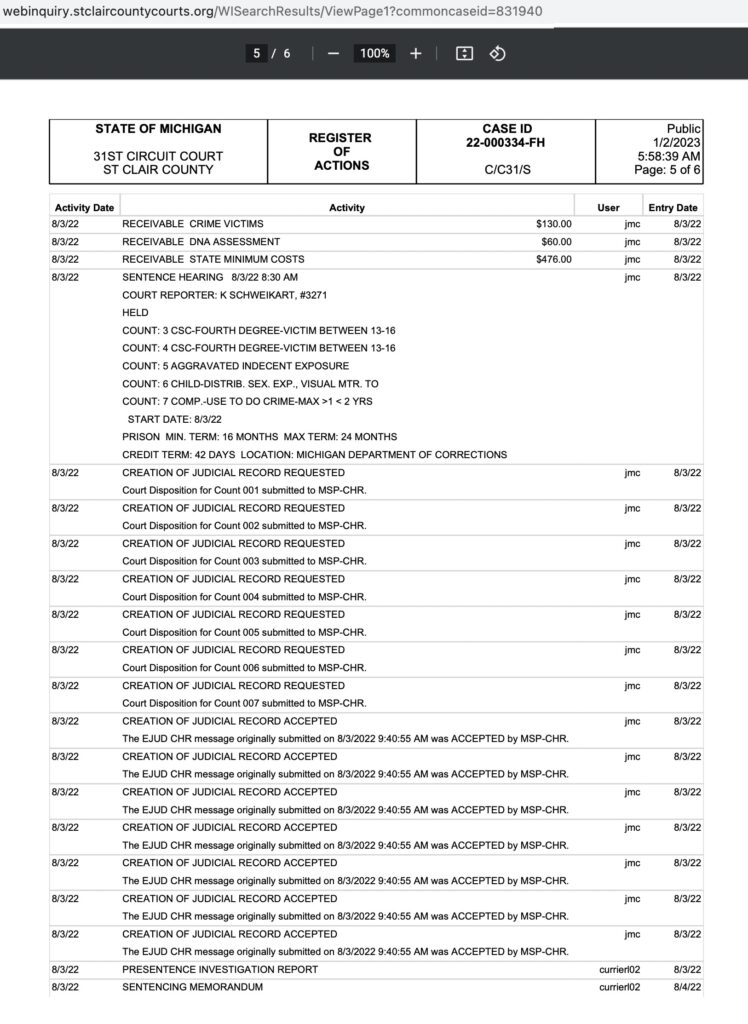 As if this wasn’t bad enough, according to a FOX2 news report from Detroit, a second youth pastor from The River Church was arrested and arraigned on December 24, 2022 on charges of sexual assault against children!

Here is a screenshot I took from The River Church website. Obviously, I added the mug-shots of Stefan Wahl and David Shegena to make a point of how ludicrous The River Church’s claim to be a safe place for children is.

Something clearly needs to be changed at The River Church. I suggest starting by examining the staff at The River Church. It appears that Kim Wahl is no longer officially on the staff. She is not mentioned as a staff member on the latest update of The River Church’s website. Obviously, neither is Stefan Wahl, I added him to this latest screenshot to emphasize the nepotism on the payroll. Everyone pictured below, with the exception of Bill Forbes, is related.

In case you have trouble making out the screenshot below, Bill Wahl is the lead pastor. Matt Wahl is Bill’s brother. Gabrielle Smith is Bill’s daughter. Scott Smith is married to Gabrielle Smith, making him Bill’s son-in-law. Danielle Oakey is Bill’s daughter. Dylan Oakey is married to Danielle, making him Bill’s son-in-law. Finally, Stefan Wahl is no longer on staff because he is serving time for his crimes in the Michigan State Penitentiary. 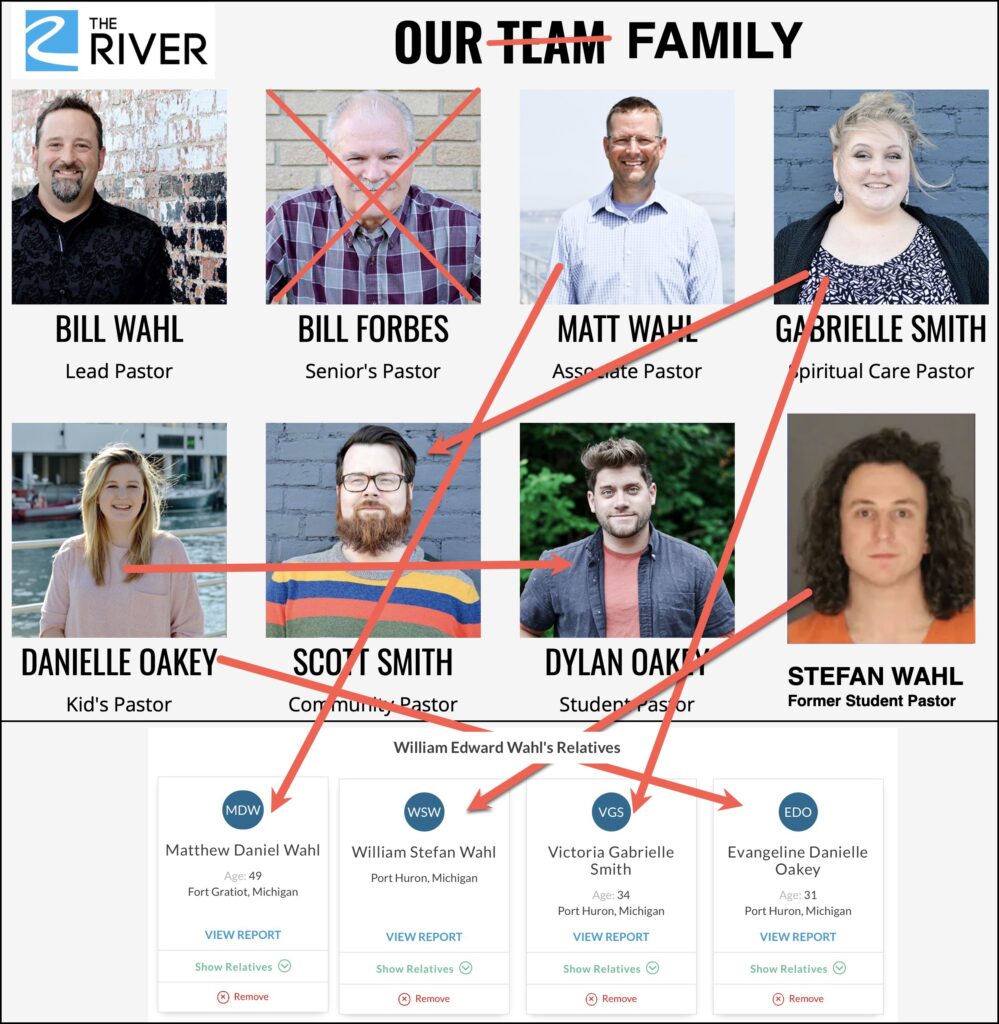 I’m sure I don’t need to tell the Wartburg Watch readers that The River Church is a very poor business model. It is ripe for corruption. Were I attending the church I would demand and independent audit of finances. I would also demand that the nepotism structure be dismantled.

This doesn’t even address the sexual abuse issue! In my opinion this church is a dumpster fire. I don’t care how good the music and preaching is.

Below is another screenshot from The River Church website. One of the things they claim to believe is “Restitution where possible.” Have they made any effort to make restitution with the victims who were sexually abused by two of their Student Pastors?  Examining their website and listening to some of their sermons I did not find any mention of helping the victims. Only applause when Lead Pastor Bill Wahl announced he wasn’t going anywhere!