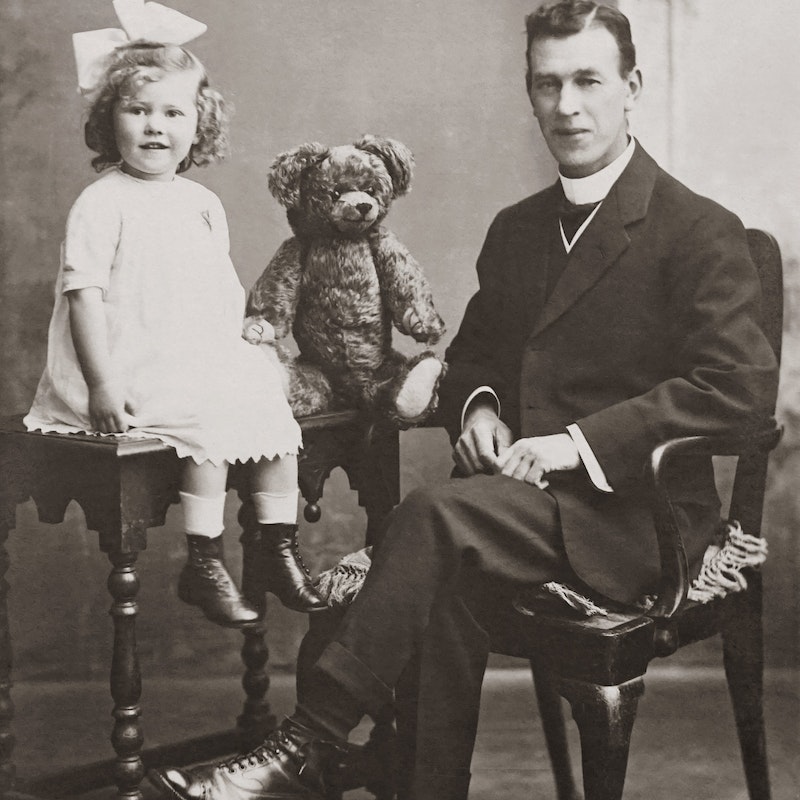 Was this bear for him or her? link

“We forget that the sweetest joys are found in the simplest acts: hugs, laughter, quiet observation, basic movements, holding hands, pleasant music, shared stories, a listening ear, an unhurried visit, and selfless service. It is sad we forget a truth so elementary.” ― Richelle E. Goodrich, Making Wishes: Quotes, Thoughts, & a Little Poetry for Every Day of the Year..

I was mulling over what to write about tonight and got a call from my good buddy, Eric Bonetti. He told me that he wouldn’t attend a particular Methodist church in the greater D.C. area because they were putting Teddy Bears in all the pews to provide comfort, primarily for adults. He noted that one of the teddy bears was covered in baby burp residue.

Last year I wrote The Coming Methodist Schism: Plans Are Being Laid for the Inevitable Split.

I believe it is the lens through which Scripture is interpreted which is at the heart of this matter. In other words, they take a more conservative approach, although they will ordain women. The ordination of women is gaining a foothold in some conservative denominations but that is for another time.

faithful Methodists have been praying and working to discern God’s will for a new church rooted in Scripture and the historic and life giving teachings of the Christian faith.

Here is why they say they are forming this church.

There is a tentative timetable for this new group of churches.

It is widely assumed that the delegates to The United Methodist Church’s next General Conference (August 29-September 6, 2022) will approve a plan for the denomination’s amicable separation. Once that plan of separation is approved, the Global Methodist Church’s Transitional Leadership Council will officially launch the new denomination. Alternatively, if it becomes apparent that the leading bishops, centrists, and progressives who covenanted to support the Protocol no longer do so, then the council will consider bringing the new church into existence without delay. For approximately one year, the Global Methodist Church will be a church in transition as it prepares for its convening General Conference. Unfortunately, due to Covid-19 pandemic induced travel and meeting restrictions, it is not possible to provide an exact date for the official beginning of the Global Methodist Church. Our fervent prayer is that it will take shape later this year.

Here is a link to THE TRANSITIONAL BOOK OF DOCTRINES AND DISCIPLINE THE GLOBAL METHODIST CHURCH. This is for those of you who are like me and love to look at some core beliefs, this is well worth the read

At the end of the post, I prayed for peace.

I wonder if it will take a year to get this ball rolling? I think it might happen sooner rather than later. May there be peace.

Numerous churches are leaving the denomination.

“We are incredibly sad that these churches have chosen to break connection with us,” said Hal Sharp, chair of the Texas Annual Conference Board of Trustees. “However, we have confirmed that they have met the requirements for disaffiliation and are properly before you today.”

Many of these congregations are expected to become affiliated with The Global Methodist Church, a denomination started by conservative Methodist leaders in the wake of the UMC’s drift towards a liberalized stance on LGBTQ issues.

In my state of North Carolina, WFMY News2 reported that 249 churches separate from N.C. United Methodist Church over LGBTQIA+ guidelines.

Leek explained, “Some of the votes who are unanimous, they want to all leave. Some only either passed or failed by a few votes. There’s deep pain and deep hurt maybe even a sense of betrayal in some of our members.”

Because of this, UMC has created something called United Methodist Collective, for people who feel displaced because of the disaffiliation.

The next meeting to talk about changes to the rules will be in April of 2024.

Disaffiliation is happening in the U.S., and it appears it will continue in the next couple of years. I wonder what percent of churches will leave.

The traditionalists are expected to lose the majority by 2024

United Methodist exits are accelerating, as at least 260 of 779 churches in the North Carolina Conference, or one third, have voted to disaffiliate or plan to next year, according to The Carolina Journal.  United Methodist churches, whose property is owned by the denomination through the local “conference,” can vote to exit the liberalizing denomination, with their property and a one-time payment, before the end of 2023.

…It’s expected that 1500 and likely more churches will vote to exit this year, with perhaps a total of 3000-5000 churches exiting by the end of 2023. United Methodist Book of Discipline Paragraph 2553 allows congregations to exit with property by the end of 2023. But exits must be confirmed by votes of annual conferences, which typically meet in May or June.

… Over 100 churches in the Florida Conference are suing Bishop Ken Carter and the conference over an exorbitant insurance charge he has added to exit costs.

It looks like traditionalists will be on the losing end.

Traditionalists are not expected to have a majority in 2024.

So, in times of sadness, some may reach for the Methodist Teddy Bear.

I was surprised to hear of this form of outreach. 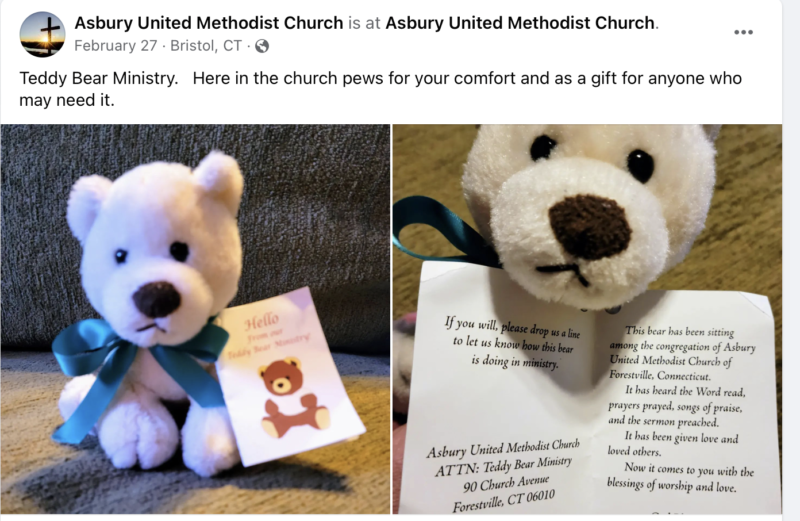 Long Plain United Methodist Church posted this on its website.

These bears are placed in the pews. According to Chapel Hill United Methodist Church:

Each bear will have a number attached tagged that says:

“Dear friend I’m just a teddy bear it’s true,
But I have a message for you.
I’ve been to church and sat in a pew;
I’ve been hugged and squeezed by quite a few
I’ve bowed my head when they said a prayer;
I’ve been charged with love by those who care.
And now I’ve come to live with you
To bring you joy when you’re blue.
To let you know that others care
And want to help your burdens bear.
So, keep me close and squeeze me tight
and know God’s love helps make things right”
Love, from your friends at
Chapel Hill United Methodist Church

Here’s a Methodist video on the matter.

I don’t know these churches; I’m sure they mean well. Some church visitors might find teddy bears in the pews for adults a bit off-putting. I believe these bears are a simplistic solution to the loneliness epidemic affecting adults in the U.S. post-pandemic. According to Cigna in The Loneliness Epidemic Persists: A Post-Pandemic Look at the State of Loneliness among U.S. Adults:

Now, according to new, confirmatory data from Morning Consult commissioned by Cigna, more than half of U.S. adults (58%) are considered lonely. This is fairly consistent with pre-pandemic researchThis link will open in a new tab. [PDF] that showed 61% of adults experiencing loneliness in 2019, after a seven percentage point increase from 2018.

Sadly, in many churches today, people are just butts sitting in the pew, rarely leaving their seats to reach out to others. People are looking for human contact, and it’s sad to think that teddy bears are a solution to loneliness for some churches. Frankly, a teddy bear in a pew would hold little meaning for me, but perhaps I’m just the odd one. I want to hug a human friend as opposed to a teddy bear.

Is there a better use for these bears?

Here is what South Hills United Methodist Church does with the bears. I think this makes more sense.

South Hill UMC is collecting new and gently-used stuffed animals for Gleaning for the World who ships them to orphanages in impoverished countries.  Providing comfort, security and love to children in tough situations through the gift of a stuffed animal.

So, call me a curmudgeon, but I think I would feel odd sitting next to a stuffed animal. I would prefer to sit next to a friendly person.