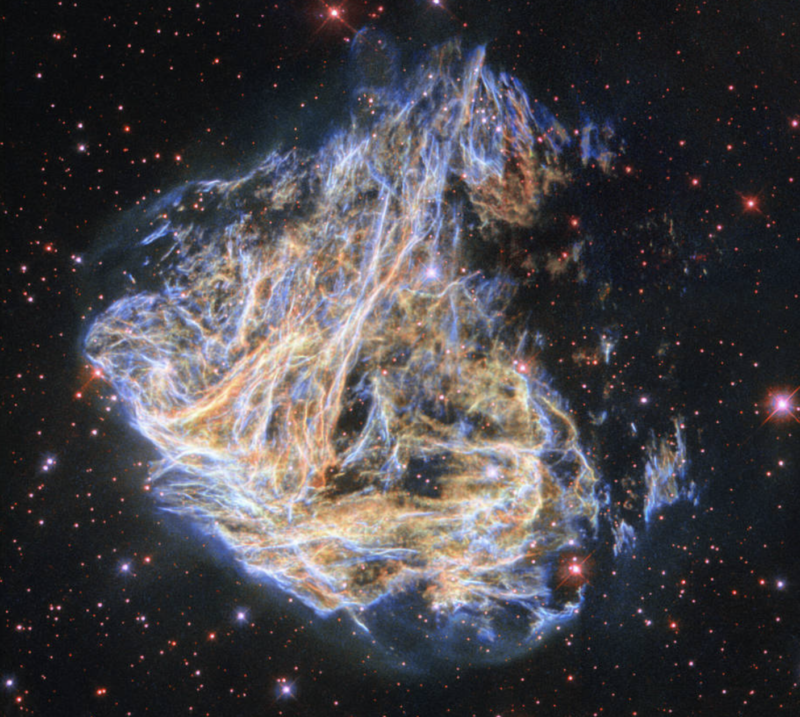 The death of a star. NASA

“Few delights can equal the presence of one whom we trust utterly.” George MacDonald

Dane Ortlund is the son of Ray Ortlund Jr, who has been quite big in the Calvinist Revival circles. I have written about him off and on. According to his bio:

Dr. Dane Ortlund is on the planet to enjoy the endless grace of God and to invite others to join him there. He’s a pastor, author, and speaker, currently serving as Senior Pastor of Naperville Presbyterian Church outside Chicago after a decade in non-profit publishing at Crossway.

He is best known for his well-received book:  Gentle and Lowly: The Heart of Christ for Sinners and Sufferers. This book received over 10,000 5-star ratings. It is described on Amazon:

Christians know that God loves them, but can easily feel that he is perpetually disappointed and frustrated, maybe even close to giving up on them. As a result, they focus a lot―and rightly so―on what Jesus has done to appease God’s wrath for sin. But how does Jesus Christ actually feel about his people amid all their sins and failures?

This book draws us to Matthew 11, where Jesus describes himself as “gentle and lowly in heart,” longing for his people to find rest in him. The gospel flows from God’s deepest heart for his people, a heart of tender love for the sinful and suffering.

These chapters take us into the depths of Christ’s very heart for sinners, diving deep into Bible passages that speak of who Christ is and encouraging readers with the affections of Christ for his people. His longing heart for sinners comforts and sustains readers in their up-and-down lives.

Although I have not read the book, I have heard it discussed as a book that has helped many people. So when I read the following tweets by Ortlund. I experienced some cognitive dissonance. It is easy to write about the love of Jesus for sinners. It is another thing to share it with others. He seems to blame people for their frustrations, leading them to leave the church. Since he is the pastor of a church currently in the news, I might have suggested that he quote from his book instead of revealing his frustrations with people in the church. Is he speaking about the people in his own church? 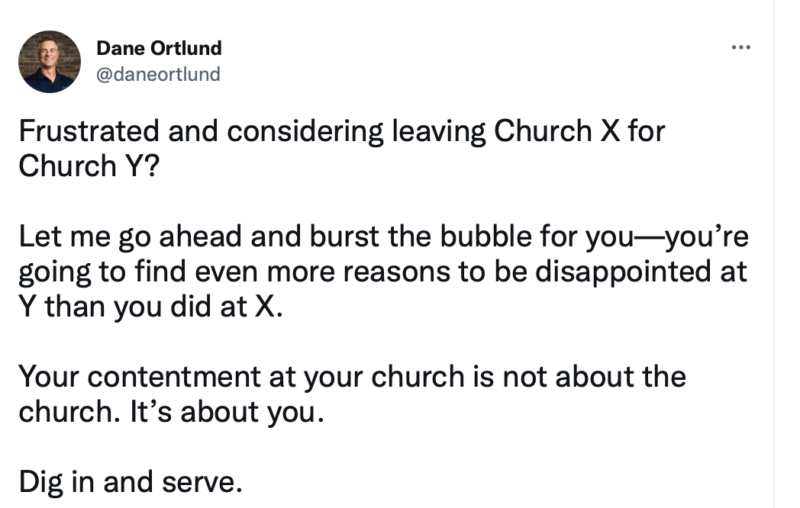 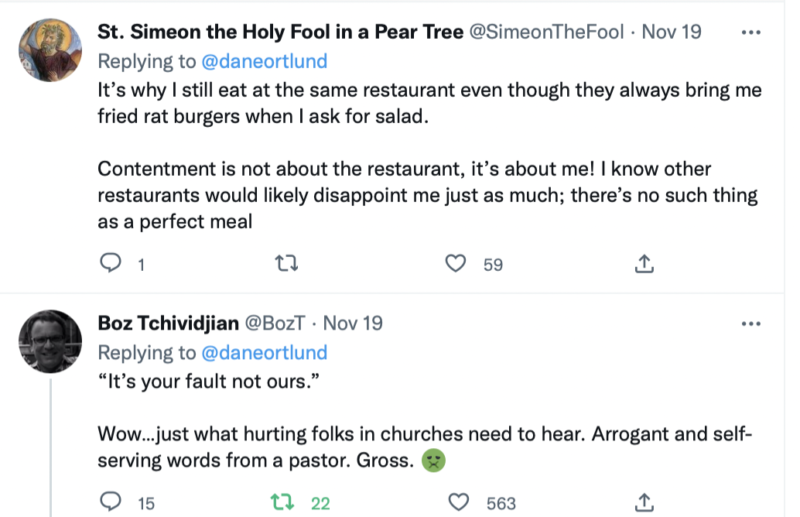 Once again, Ortlund appears to be pastorcentric, giving rules for sitting in church. This seems far away from his acclaimed book. So, who is the real Dane Ortlund? Right now, he sounds like his father. 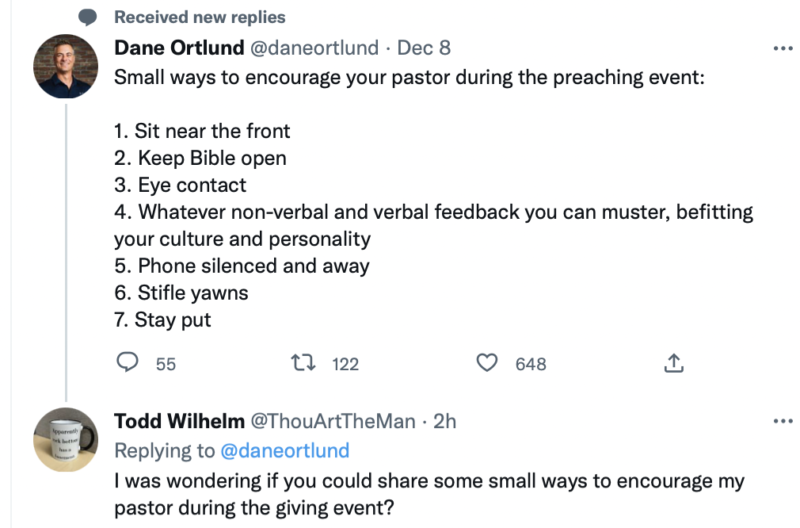 Ortlund again focuses on his unhappiness with some folks in his church. 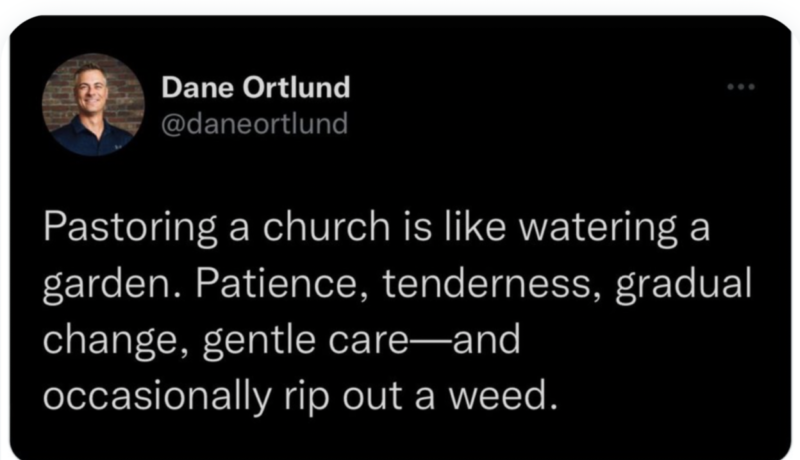 There was some pushback towards Ortlund, who seemed a bit off of his Gentle and Lowly game. A couple of these tweets have been deleted. Was this pushback the reason why he signed off Twitter? Probably not. 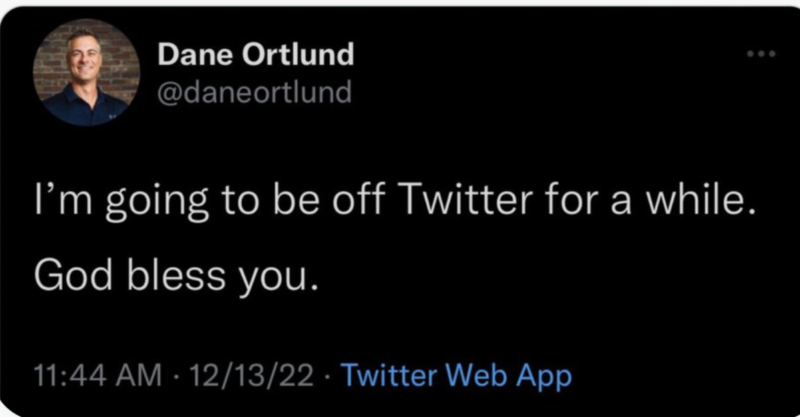 Dane Ortlund and Ray were part of the cheerleading squad for Mahaney until the bitter end. This alone makes me wonder about the Gentle and Lowly mantle worn by Ortlund.

There is trouble at Naperville Presbyterian Church.

Dane Ortlund is the senior pastor. Christianity Today published: State Finds’ Substantial Evidence’ of Retaliation at Illinois Church: “A firing at Dane Ortlund’s Naperville Presbyterian Church spurred a rare legal determination that could be a useful case study for churches.”

The former director of operations at Naperville Presbyterian Church, Emily Hyland, said her termination came days after privately complaining to two elders about gender discrimination from Ortlund. At the time, she had worked at the church for eight years, and he had been senior pastor for six months. After her firing, she filed charges over gender discrimination and retaliation at the state agency.

The Illinois Department of Human Rights (IDHR) did not find evidence that the church or Ortlund discriminated against her based on her gender. Evidence shows that “Ortlund … never made any discriminatory remarks directly related to [Hyland’s] sex,” the report said, nor was there evidence of discrimination that rose to the level of a “hostile work environment.”

But the agency found “substantial evidence” that she was fired “in retaliation for having engaged in prior protected activity.”

This finding by the agency is significant.

Employment disputes are common, but this case might offer useful lessons for churches in similar disputes–both in terms of legal complexity and in terms of navigating pastoral care of a terminated staffer who is also a church member. Employment lawyers say it’s rare for an agency to issue a finding of substantial evidence of retaliation, making Hyland’s case a significant one.

The longest-serving elder left the church over this action.

One of the two elders who fired Hyland alongside Ortlund, Dave Veerman, said he regretted the handling of the firing and said he should have listened to Hyland before taking action. When Ortlund became the pastor, Veerman was excited, he said, because he liked Ortlund’s writing and teaching. Now, Veerman told CT, “I tend to believe Emily’s side of things,” though he thinks Ortlund “wants to do the right thing.”

Did the “session” drop the ball, or are they all the “king’s men?”

You can substitute elders for the session, which is the Presbyterian word. I have a question. Ortlund comes across as bull-headed in his tweets. He had only been at the church for six months. It is not unusual for certain pastors to fire personnel to make way for their friends. Could this be what is happening here?

After her firing, Hyland also brought her complaints about Ortlund to the local presbytery in the Chicago area, which investigated. The presbytery concluded in a private action this fall that “the reports from Emily Hyland do not create a strong presumption of guilt against the character” of Ortlund. The presbytery report focused on her professional performance issues as justification for her firing.

Hyland said no one had complained about her work or behavior before Ortlund joined the staff. The firing was devastating to her personally. “It was so catastrophic to lose all my Christian community in Naperville,” she said. “Just gone.”

The presbytery said her legal actions following her firing created a “challenging environment” for church leadership to provide her with “pastoral care.”

Another elder, who has struggled to transition to a new church and asked not to be named, said he felt pushed out of the church after he helped Hyland remove some of her office items from the church following her firing. He said Ortlund was angry with him about helping her move and questioned him extensively about it.

If these statements are factual, I could imagine that Ortlund was cleaning house, Calvinista style. Similar stories were told in my series on Chapel Hill Bible Church.

Her “unwillingness to grow” was the problem. This is nonsense or a more precise term, “gobbledygook.”

In the church’s responses to charges in the state investigation, Ortlund stated the elders believed the “reality” was different than Hyland’s characterizations and that her “unwillingness to grow” made it impossible to continue working together.

Of course, they tried to get her to sign an NDA. She didn’t. Yay!

She indicated she was told her termination was the “will of the session”—or the body of elders overseeing a Presbyterian church—and the reason was communication.

Hyland wrote that she was offered severance on condition that she sign a non-disparagement agreement (NDA). She added that she refused to sign it.

She claims Ortlund told people not to contact her.

It seems possible that Ortlund learned how to “shun Mahaney style.”

After Hyland was fired, she wrote, Ortlund told other staff, church deacons and elders not to contact her. And an elder who helped her clean out her office was removed from the session soon after, according to Hyland.

“I lost my job, my friendships, my relationships with my co-workers, my reputation, and the home where I had worshiped for so long,” Hyland wrote.

If these accounts are accurate, Mr. Gentle and Lowly could be Mr. Pastorcentric and Authoritarian. The next move is Hyland’s.

Hyland could start a complaint with the state’s Human Rights Commission or file a civil lawsuit against the church based on the finding, according to the IDHR. She told TRR she hasn’t decided yet what she’s going to do.