So you see, faith by itself isn’t enough. Unless it produces good deeds, it is dead and useless. Now someone may argue, “Some people have faith; others have good deeds.” But I say, “How can you show me your faith if you don’t have good deeds? I will show you my faith by my good deeds.”

You say you have faith, for you believe that there is one God. Good for you! Even the demons believe this, and they tremble in terror. How foolish! Can’t you see that faith without good deeds is useless?
-James 2:17-20 NLT

The video below illustrate what Jesus and James, the half-brother of Jesus, addressed in the quotes above.

On November 21, 2021 Darrell Brooks drove his mother’s SUV through a Christmas parade in Waukesha, WI, killing 6 people, maiming 61 others, and causing untold mental anguish in thousands of others.

On October 26, 2022 the jury returned a verdict of guilty on all 76 counts. Brooks chose to represent himself in this trial, I compiled the video below from his closing statement. The District Attorney, whether she realized it or not, refuted Brooks’ claim to being a Christian by saying the same thing that Jesus and James said in the quotes above.

The above information lays the groundwork for my story today.

Based on the definitions below, Jacob “Jake” Malone is not a pedophile, rather, I believe he would be classified as a hebaphile or an ephebophile.

Here is a short overview of Jake Malone’s life.

“Jake Malone is a Worship Leader, Youth & Young Adults Pastor who just can’t get enough of spreading the love of Jesus through music and teaching! In addition to leading worship Jake is passionate about equipping students in the gifts God has given them. He says that from music, to leadership, to evangelism “Teenagers are the church of TODAY, and not tomorrow – its time to step up and start changing this generation from the inside out!”

Jake got his start in ministry growing up in northern Minnesota. While in high school, he founded a Christian rock band that performed and lead worship for youth groups and camps across the upper Midwest region. Jake continued his passion for worship while attending Northwestern College in St. Paul, MN by leading worship for a number of chapel services each year. Jake and Libby have a child, Ian (born 2008). Jake served as an Associate Pastor of worship and youth at Ascending Praise Church in Apple Valley, MN. After prayer and consideration Jake answered the call to be the Youth Pastor at Trinity (Mesa, AZ) beginning in July, 2009. Jake added the role of Young Adults Pastor in January, 2011.”
Source – bio on Jake Malone from Trinity Church in Mesa, AZ. (From Trinity, Malone moved to River of Life Church in Elk River, MN and then to Calvary Fellowship Church in Downingtown, PA.)

Malone met the girl he would groom and eventually sexually abuse when he was her youth pastor at Trinity Church in Mesa, Arizona, she was 12-years-old. She did not have a father in her life.

After moving to a new job at River of Life Church in Elk River, MN, Malone reached out to the girl when she was 17, inviting her to stay with him and his family at his new home in Minnesota and help look after Malone’s three children. It was there that Malone attempted to have inappropriate contact with her. Police say Malone moved to Chester County in July 2014 and again invited the victim to stay with him, registering her at a local high school.

The abuse began in the fall of that year. Sexual contact, which included touching and kissing, occurred almost daily during the teen’s senior year in high school. When she turned 18, she told police Malone served her alcohol on several occasions, and on one occasion, she became “highly intoxicated” and was molested by Malone. During the abuse, the victim told police she was attending the Calvary Fellowship in Downingtown, where Malone had been a pastor since August 2014.

Bill Bateman, one of the pastors at Calvary Fellowship, said Malone tendered his resignation in November 2015 when he was confronted by the church’s elders, and that the Calvary Fellowship staff immediately began cooperating with authorities when the allegations surfaced. Malone did not admit guilt when confronted, Bateman says, but did say he told them of a situation involving a young girl living with him that was expecting a child. Police say the victim told them Malone impregnated her just after she turned 18.

One week after Malone resigned from his pastor’s job in November 2015 he made this deceptive video.

Malone and family then fled to Ecuador. Law Enforcement was certain Malone had learned there was a warrant out for his arrest and he had fled to escape justice, but Malone had an attorney who assured Law Enforcement he was merely on a vacation and would be returning at the earliest possible time.

Upon his return Malone was arrested and placed in prison to await his trial. His attorney worked out a plea bargain but the Judge rejected it.

Jacob Malone was sentenced Friday, April 28, 2017 to three to six years in prison after entering guilty pleas to institutional sex assault, corruption of minors and child endangerment. He also must register as a sex offender for 15 years. Malone and prosecutors had reached an earlier plea deal that called for a two-year minimum jail term, but Judge Jacqueline Cody rejected that deal a month ago. “You are serving a sentence much lighter than the crime deserves,” Cody told Malone as he stood before her in handcuffs and shackles. “You have taken responsibility for a very, very serious series of crimes that have completely altered someone’s life,” the judge told Malone, who expressed remorse for his actions. “You can’t ever take that back.” Cody called it a failure of the court system that the age of the victim played a role in downgrading the crimes he was guilty of, even though he had “encouraged” and “promoted” the illicit behavior. “The things you have done are inexcusable,” she told Malone.”

Judge Cody was, IMO, correct to reject the light, 2 year sentence Malone had received, but she didn’t actually get much tougher.  She sentenced him to 1-2 years on each of 3 counts, for a total of 3-6 years. Malone ended up serving one year longer than he would have in the first sentence! He was paroled in February, 2020, having served 3 years, but back in prison within a week. What follows is the reason why. 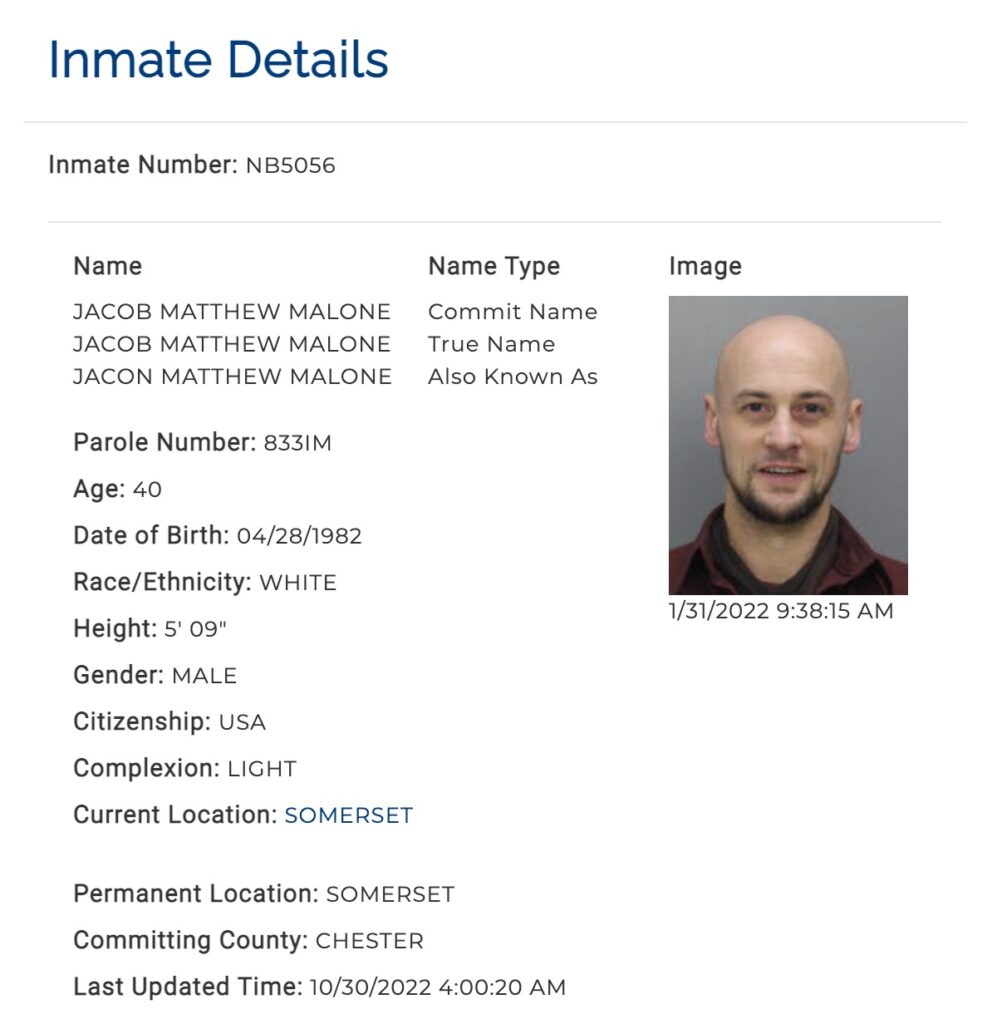 On February 24, 2020, Pennsylvania State Police charged former youth pastor, Jacob Malone, with multiple counts of Solicitation to Commit Murder, and related charges, for attempting to hire someone to kill Pastor Harold Lee Wiggins and Common Pleas Judge Jacqueline Cody in Somerset County. The defendant, age 37, served as a pastor at Calvary Fellowship in Downingtown, P.A., from 2014-2015.

The defendant had been serving a state prison sentence of 3-6 years at SCI Laurel Highlands in Somerset County for sexually assaulting a teenage girl in Chester County. He allegedly offered a fellow inmate $5,000 to kill the head pastor at the church because of his involvement with Malone’s case. The defendant also told the inmate that he would be willing to offer additional money for the murder of Judge Cody, who presided over the sexual assault case.

This inmate contacted the Chester County District Attorney’s Office in July 2019, regarding this accusation. Chester County Detectives conducted an immediate investigation, including interviewing the inmate that defendant had solicited to commit murder. After concluding that Chester County had no jurisdiction over this matter which occurred in Somerset County, PA, our assigned detective promptly referred it to the Pennsylvania State Police in Somerset on August 12, 2019.

The allegations from the criminal complaint (a defendant is presumed innocent until proven guilty) are as follows:

On February 18, 2020, Pennsylvania State Trooper Patrick Hauser contacted an inmate inside SCI Laurel Highlands. He reported that the defendant told him he “wanted to get revenge on the people involved in his case.” He told the defendant to “put it behind him.”

Trooper Hauser then contacted Chester County Detective John O’Donnell on February 20, 2020, regarding this incident. O’Donnell reported that he met with another inmate after he received letters from him about an alleged murder for hire plot. The inmate told the detective that the defendant had attempted to arrange for the murder of Wiggins and Cody while they were both incarcerated at SCI Laurel Highlands. Trooper Hauser reviewed the letters sent by the inmate and initiated the criminal complaint.

The defendant was arrested on February 26, 2020, and is currently incarcerated awaiting a preliminary hearing before Magisterial District Judge Kenneth Johnson in Somerset. 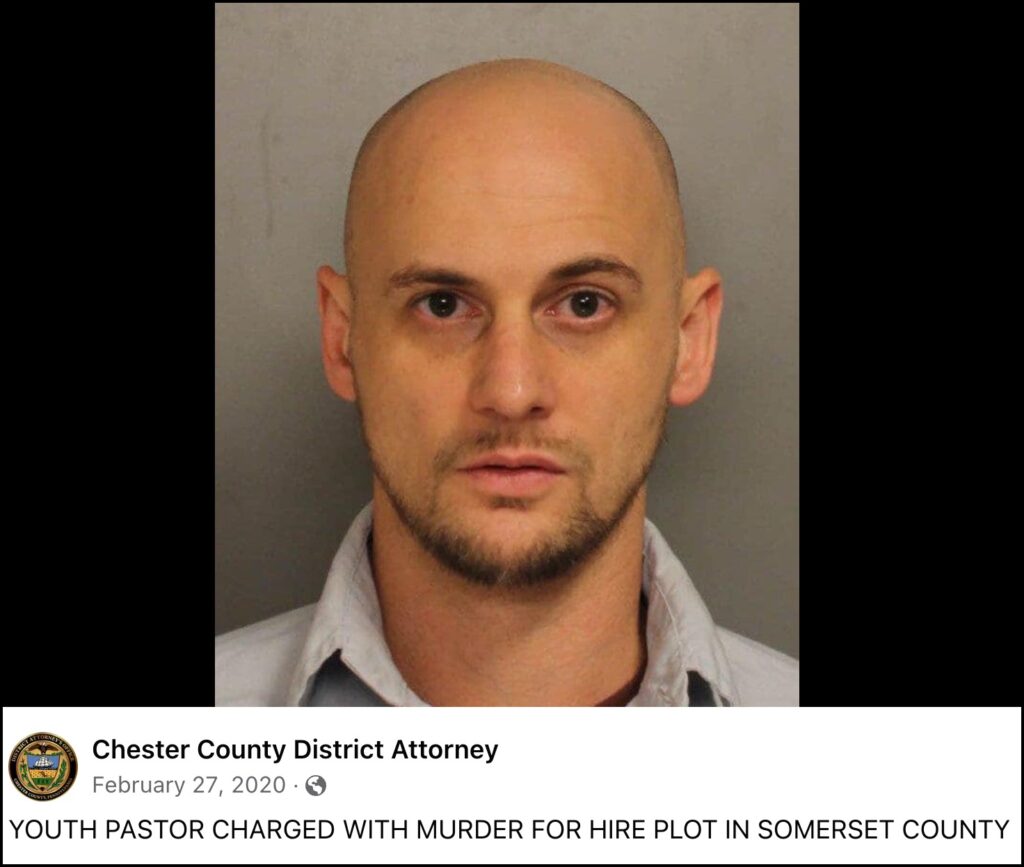 You will see below that Malone received another plea bargain and has been sentenced from 16-84 months. I do not know how the sentence works, but if I were to guess I would say Malone will be eligible for parole after serving 16 months in prison.  Since he violated probation from his first sentence he was locked up again in late February, 2020. In some states if you violate probation you are sent back to prison to serve out the entire sentence. If that is the case Malone would have to serve out the full 6 years and would complete that sentence in February of 2023. After that his next sentence would begin. At any rate, I believe since I got the information showing him to still be in prison one week ago, he is still in the iron bar hotel. 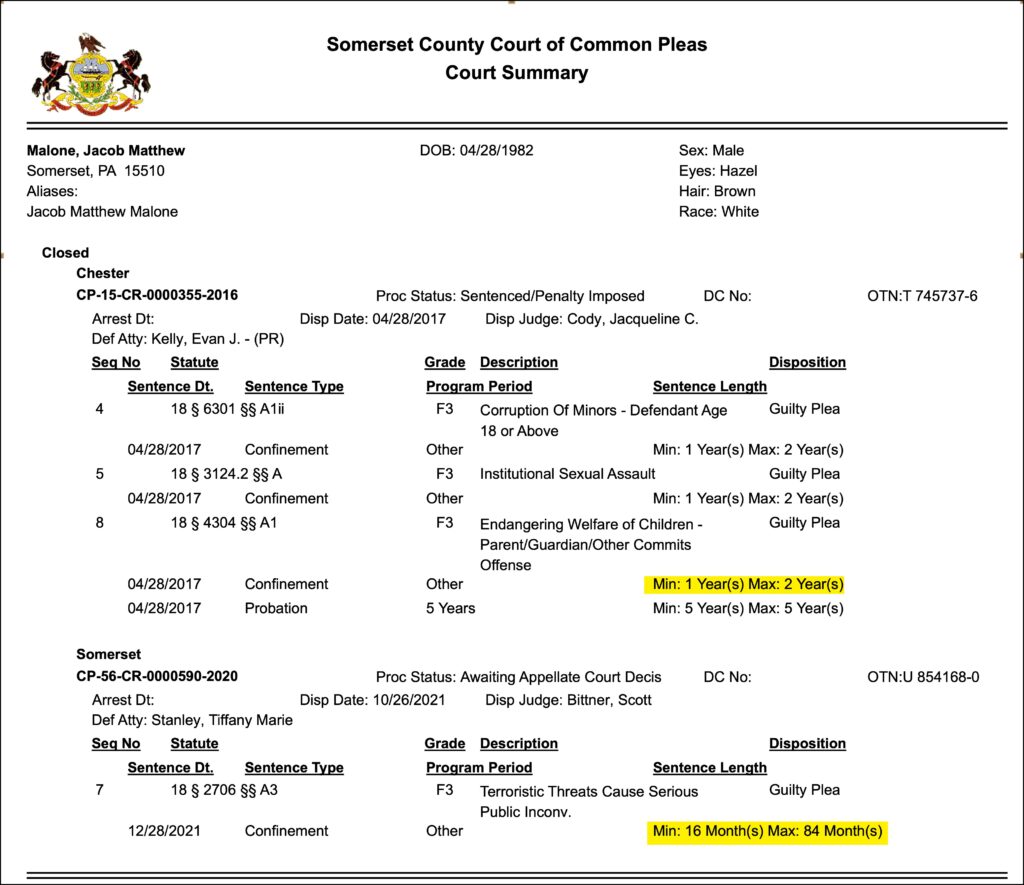 The moral of this story is we can’t see into somebody’s heart. But we can see their deeds, and if they are evil you can disregard their flowery christianese language. They have revealed who they really are.