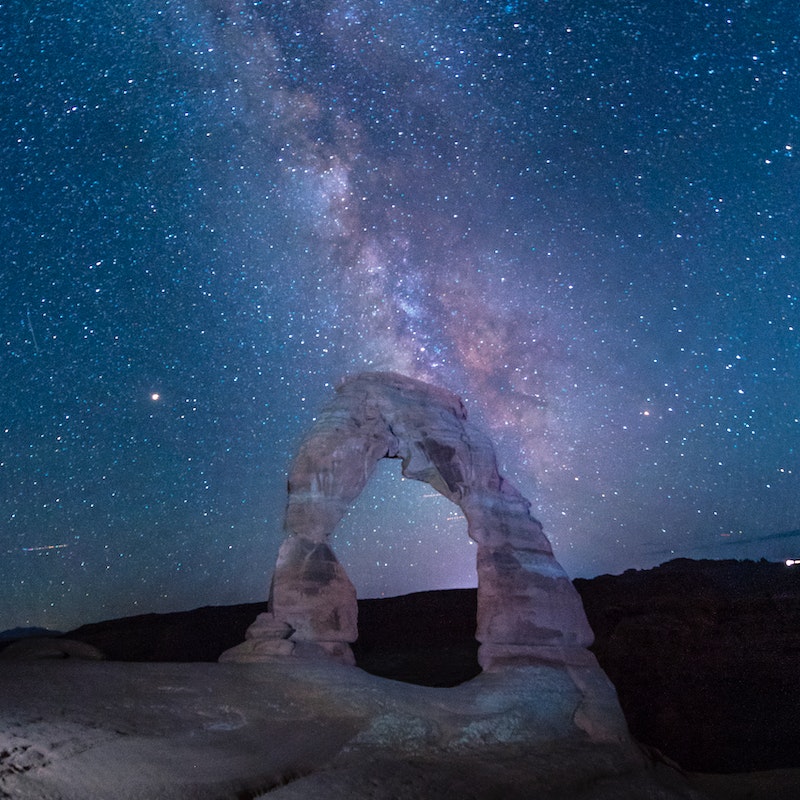 “For nothing is evil in the beginning.” JRR Tolkien

Since we are looking at how I use Twitter, here’s another example. I post tidbits that get attention. Y’all might be interested in what Tullian Tchividjian is up to. We do have fun as we spread info. I’ve been noticing Jeffrey Chalmers out and about as well as Elastigirl. 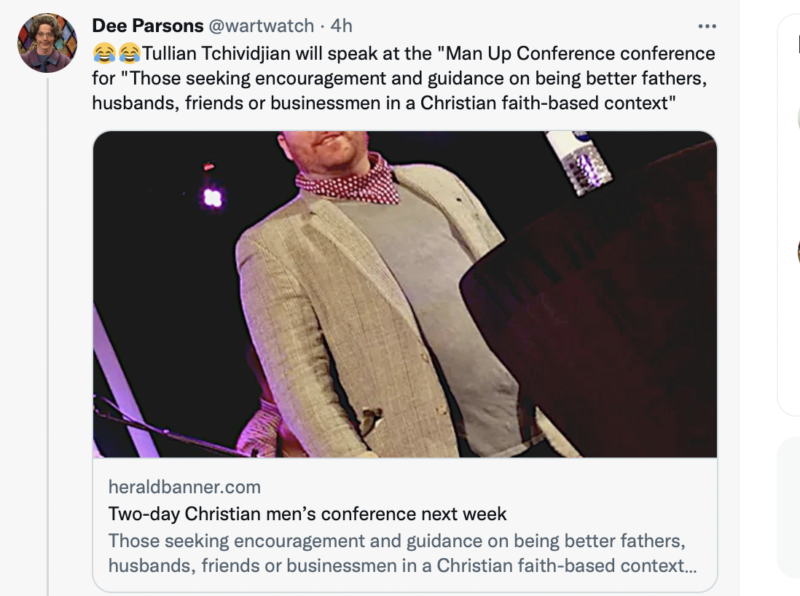 And one response that made me laugh.

PS-It looks like they are giving away guns at the conference. 🙄

At the conference, those who purchase tickets will be entered into drawings for prizes that include gun range sessions, semi automatic weapons, guided fishing trips, knives, bows and sporting event tickets.

Folks have asked me if I “just” write a blog post three times a week and post an EChurch. Recently, I realized that I spend over 60+ % of my time doing other blog-related stuff. I spend hours speaking with victims whose stories will not be told. I have counseled many people on how to “get out of their church” when they signed the dreaded membership covenant. Another thing I do is get involved in Twitter situations.

Twitter has been a way for victims and advocates, as well as those who may or may not love them, to intersect and spread information. Today I was going to write about another abuse situation with which I have had personal connections, but I’m saving that for Monday. Instead, I thought I would take you into a situation that developed on Twitter and how I intersected with it. I promise you this will make you mad.

Several people tweeted some links and tagged me (@wartwatch.) They referenced a link that brought me here. 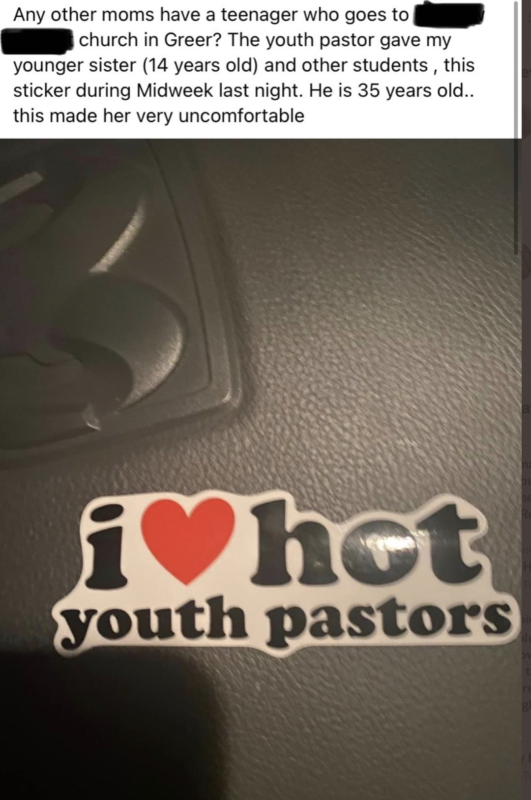 I knew immediately that this was inappropriate and maybe worrisome. In relatively short order, folks pointed me toward the church’s name and the youth pastor. 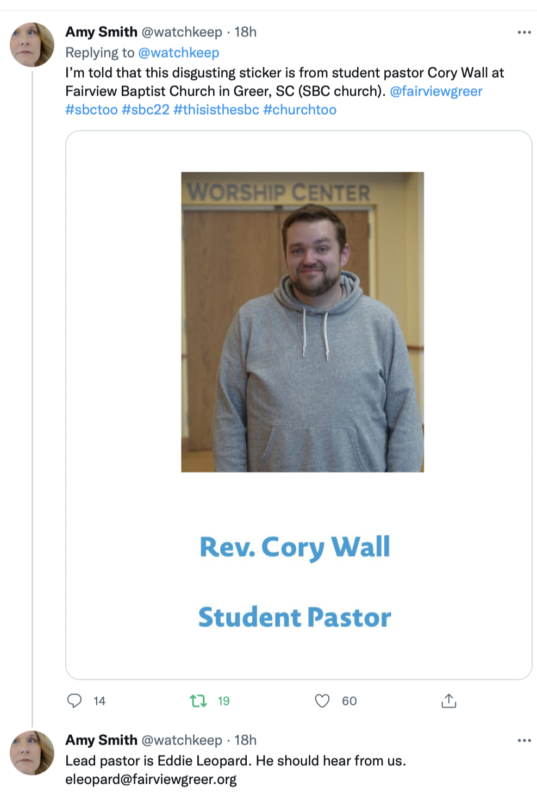 I called the church, attempting to warn them. This was a waste of breath!

I then went to the church website to verify names. Here is a link to the leadership team at Fairview Baptist Church. I then went to the SBC Church Directory and confirmed that they were members of the SBC. Indeed the SBC churches have been educated on responding to episodes like this. Nope!

I called the church and spoke with a woman who answered my call. I said I was concerned about the sticker and conveyed that this was being vigorously discussed on Twitter. I asked to speak to someone, and she said she would take my information and have “someone call you back.” She seemed relatively upbeat, so I thought she was not getting what I was saying. I reiterated that this was getting much attention. She answered cheerfully that she would let them know. I knew that something was up.

Looks like the church knew something about this and not much happened.

Something was up. The church knew bout this sticker but also knew there was more. As usual, the Twitter crowd found the information.

The first message( to the students or parents?) appears to be from the youth pastor, Cory Wall. 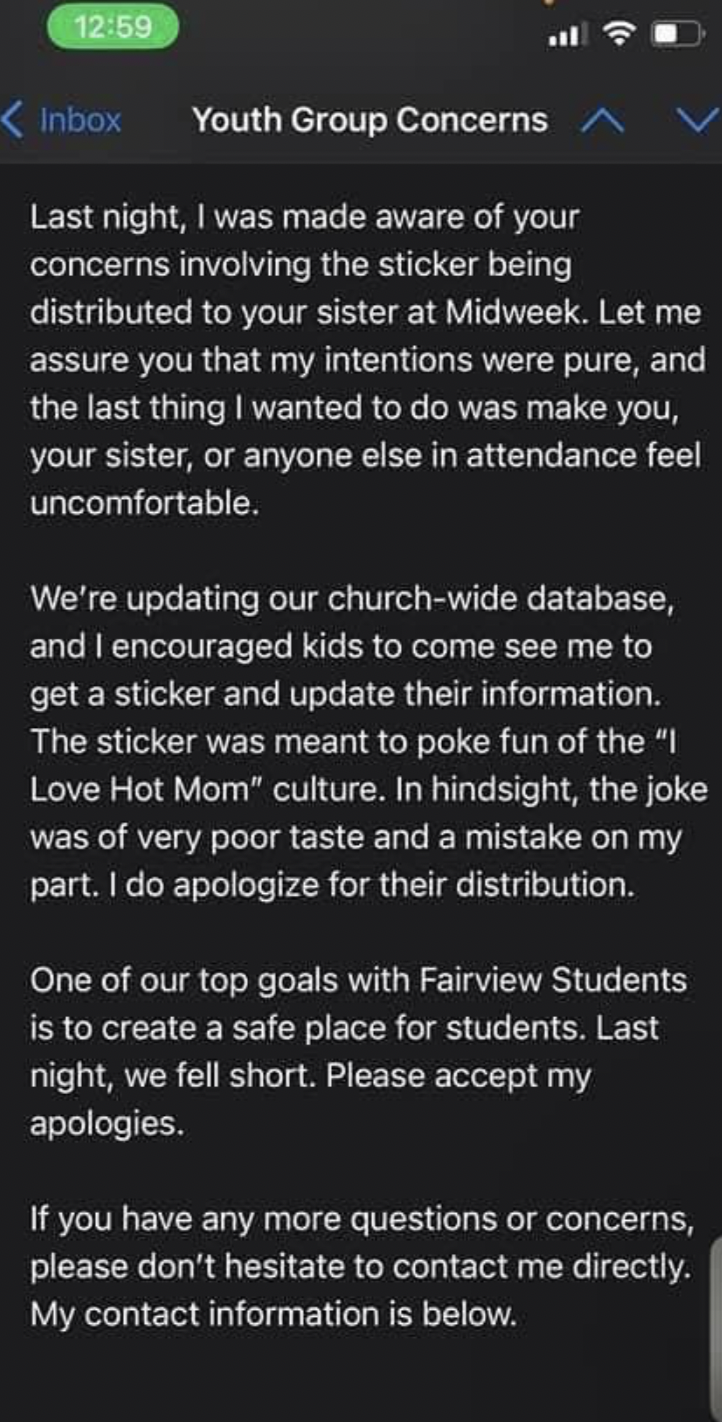 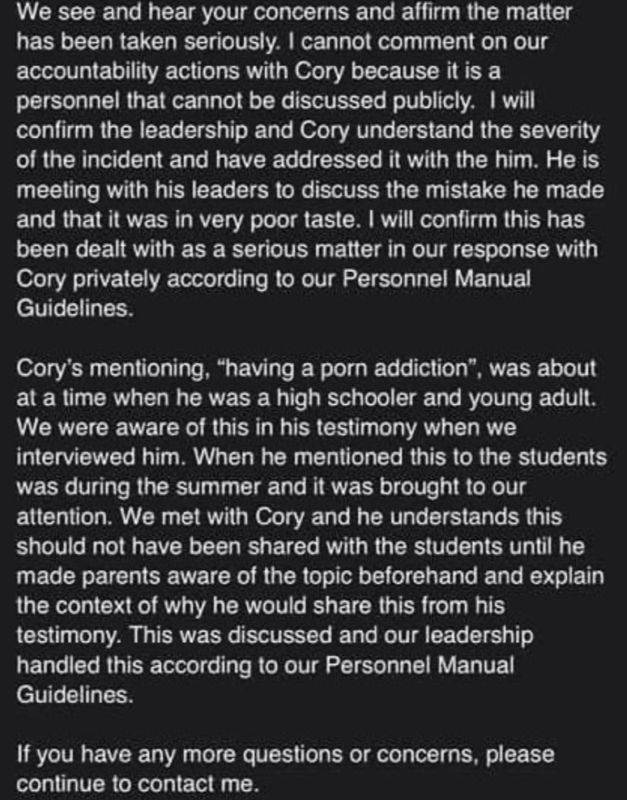 Twitter seems to think this is grooming behavior, unlike the vetted church leaders.

At this point, I knew that it was likely Fairview, an SBC church, had the probability of a youth pastor who could be sexual grooming students. Did anyone from this church read anything about the trouble the SBC is in for ignoring stuff like this?

Those actions could be considered grooming for anyone new to this stuff, and No Eden Elsewhere (who knows her stuff) got it.

They didn’t call me back, so I tried the final way to express my concern but “no joy.” 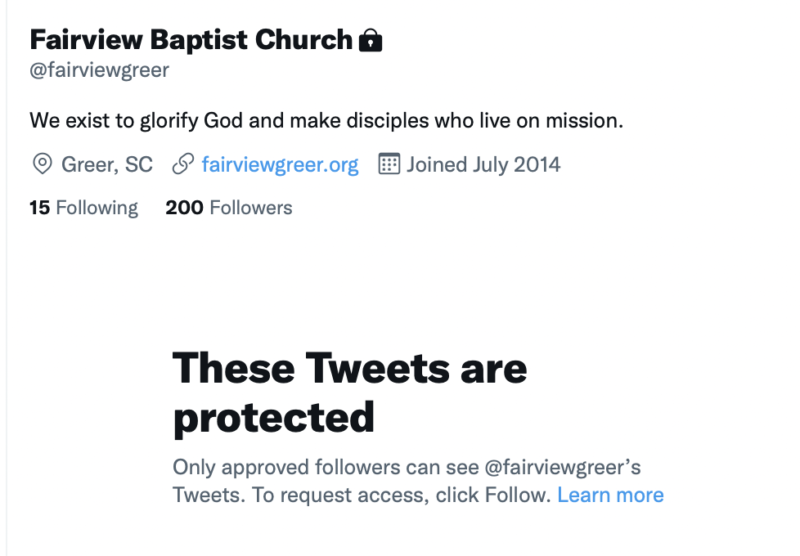 And Hope spread her concern another way. I wonder if the lead pastor is ducking his emails today? 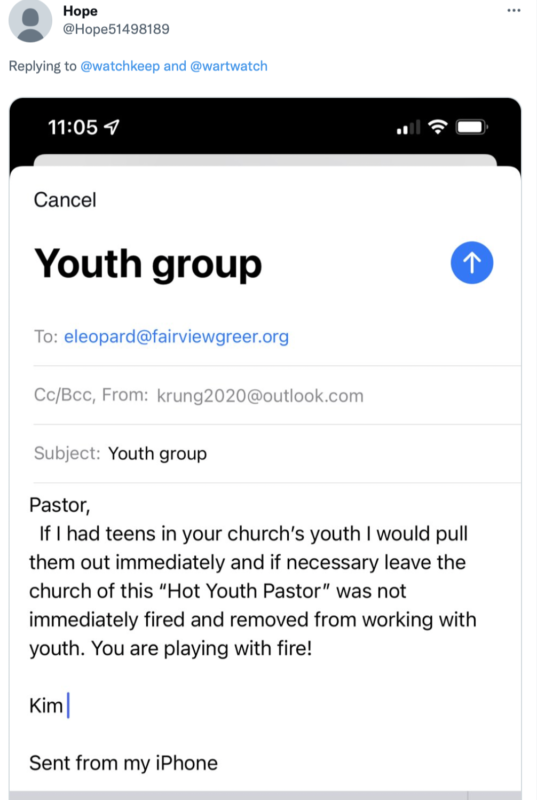 I believe that the concerned family members of the students could have originally posted the “Hot Pastor” sticker on Twitter. I also think they came to Twitter looking for help and support. I suspect the church leaders are naive, which can be dangerous for students. In my former church, a leader told a concerned family member that the youth volunteer from SEBTS was only using “locker room humor.” He continued to molest untold numbers of young teen boys in my church.

Folks, make leadership act logically or get your teens out of the program. After all of the efforts to change things in this SBC, I cannot believe that stuff like this keeps happening. As Forrest Gump might say,” Stupid is as stupid does.”