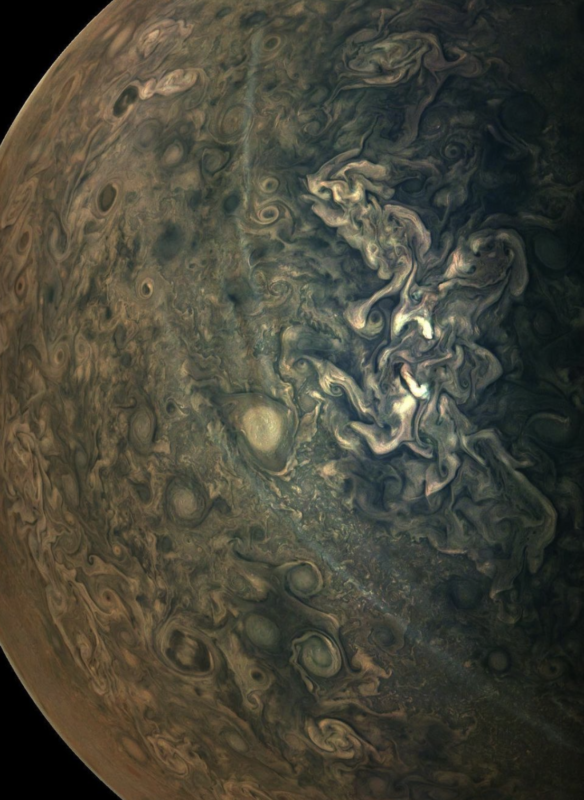 The intriguing streaks in this recent view of Jupiter are hazes floating above the planet’s cloud tops. NasaJuno

“True love is built on free will and free choice, not control and manipulation.” Ken Poirot

On Monday, I introduced you to Gracepoint Ministries by discussing Covenant Eyes. A student who was involved with the ministry reported his experience. Gracepoint utilized this mechanism as a means of overseeing the lives of the students involved in the ministry. Gracepoint came across as an authoritarian-based, controlling church. Christianity Today posted At Gracepoint Ministries, ‘Whole-Life Discipleship’ Took Its Toll. Only Sky posted The many red flags Gracepoint Church waved. The media got interested in this story due to Gracepoint’s use of Covenant Eyes to hold their members accountable.

Gracepoint came out with a media statement regarding Covenant Eyes. My interpretation of the message is the usual: “Nothing to see here. Move along.

We would like to respond to the recent article in Wired.  We share the widely-held concerns about privacy violations related to technology use. However, applications like Covenant Eyes and Accountable2You are categorically different in that users voluntarily choose who sees their internet activity. At our church, only those that volunteer to serve as staff members are expected to have some sort of accountability software or arrangement. Our current practice is to discourage staff from choosing their leaders as their accountability partners as we prefer that to be close friends or others they feel comfortable with. To provide some context, the fact is that among many Christians, the use of internet filtering or accountability software is often considered a good thing, with accountability software avoiding some of the clunky features of filtering software. We are open to better ways to accomplish safeguards our staff members desire and we’re hoping to find/implement such technologies.

Let’s take a quick look at this ministry.

From what I can tell by reading their website, they consider themselves an “Acts 2” collegiate-type church that has around 70 collegiate chapters throughout the United States and Taiwan. These collegiate churches target Asian American students. According to Christianity Today, the first church started in 1981 in Berkeley, CA, and was known as Berklund Baptist. It gets a bit confusing from here. I found a history of the group titled History of Gracepoint Ministries, Berkland Baptist Church, Antioch Baptist Church, and affiliated churches and ministries like Koinonia, ABSK, A2F, Kairos, etc. (Part 1). Interestingly, this website also discusses this group of churches’ emotional and spiritual abuses.

What are the concerns about abuse?

Christianity Today spoke directly with over 30 former members of this group, who outlined some of the abuses they endured.

Members said they were manipulated into confessing sins, screamed at by leaders, and overloaded with obligations to the point of illness. To keep members focused on mission work, Gracepoint effectively restricted dating, media consumption, and pet ownership. Leaders directed staff on how to arrange their homes, where to shop for clothes, and what cars to drive.

The students viewed their leaders as God’s mouthpiece.

“My leader’s words were like the words of God,” said Mun, who left the church last year due in part to anxiety. “I viewed God as this incredibly sensitive, temperamental, judgmental being. I’m one sin away from him dropping the hammer and smiting me, because that’s what my leaders were representing to me.”

Gracepoint has faced decades of criticism from members who left its ranks, but allegations drew new attention last year on a channel of the message board site Reddit. Posters allege they were belittled by church leaders, encouraged to take on credit card debt to fund ministry expenses, and slandered after choosing to leave the church.

The Only Sky article adds further insight. They require a “membership covenant.” (Finally, others are getting my concerns!)

The first thing I noticed about the Gracepoint membership covenant is that it contains no requirements whatsoever for its leaders. Nor does it contain a single item relating to appealing its leaders’ judgments and punishments.

…“Living by God’s word and growing in character and personal holiness.” How are we measuring this? What happens if someone is found lacking? And what if the leader’s assessment is wrong somehow?

“Being faithful, available, and teachable.” Again, how are we measuring this? Simple obedience to leaders? What if someone feels that a “teaching” violates their conscience? Or if they can’t be “available” in the way a leader wants, because the leader’s demand is simply excessive and unreasonable?

…“Exercising loving care and watchfulness over my fellow brothers and sisters.” This sounds like a demand that members snitch on anyone who disobeys. It also sounds like permission to stomp on other people’s boundaries, as we see when Christians try to make themselves a Designated Adult. Did the leaders of Gracepoint want a culture of backbiting, fear, hypervigilance, and gossip? Because this, this right here, this is exactly how you get one.

“Fully participating in all church-wide events, ministries and programs.” Here, we get another glimpse of just how onerous Gracepoint’s attendance demands must be. Again, attending “all” Gracepoint events may not be possible for everyone. What if an event is purely social in nature and conflicts with a family celebration? Or if it happens at midday and conflicts with a college student’s classes? Apparently, members get no slack at all.

This covenant is a blank check for abusers.

Gracepoint responded to CT when questioned, but I was unconvinced of their sincerity.

“I am very sorry for those who feel they have experienced harm under our ministry,” wrote Ed Kang, the church’s senior pastor and network leader, in an email response to questions sent by CT. Kang said he would be “eager to hear from them so that we can seek healing, apologize when necessary, and seek reconciliation.”

A regional director for the church, Daniel Kim (no relation to Michael Kim), shared his contact information on the forum, asking those looking for “personal reconciliation” to reach out.

Gracepoint responded to the CT article. This is where it gets interesting.

I have highlighted some statements I find interesting.

I wanted to take this opportunity to respond to a recent Christianity Today article containing various allegations against Gracepoint.

First and foremost, abuse including spiritual abuse is absolutely wrong, and we as a church are against it, period.  It is entirely incongruent with our Christian faith.

Some of the stories in the CT article are from people that I’ve personally known for many years, and I understand where they are coming from.  I understand human interactions can be complicated and fraught, and I am really saddened that their experiences were at times hurtful, and it is my sincere hope and prayer that they will find healing and continue their faith journey with God.

To be sure, our staff and leaders take responsibility for those encounters that did not go well. We deeply regret to hear about anyone who felt they were hurt. None of what follows is in any way meant to dismiss the reality that we have caused hurt. But I believe that this regarding our practicCT article is inaccurate on many points and misses a lot of context and nuance and culture.  The incidents reported are not characteristic of our ministry and do not represent approved practices by our church.  Many thousands have gone through our ministry, most of whose experiences are quite different from what has been described by a few. In other words, the sorts of incidents reported in the article are not the norm, and most of our members would testify that they enjoy strong relationships with friends and leaders as well as deeply meaningful ministry work for the kingdom of God – with a lot of joy and laughter along the way.

But our ministry is carried out by imperfect sinners, 1,600 mostly lay ministers, who are “works in progress.” And the ministry that we are called to engage in is a tough one: the church is called to welcome broken sinners to be saved by God’s grace and then to disciple them into maturity in Christ. We believe that a leader’s role includes candidly addressing human brokenness and confronting sin when necessary, as the Bible mandates, in a loving and honest manner. But in that process, there are definitely situations where individuals make wrong calls, interactions go badly, and leadership comes across too controlling or too harsh.

We are working hard at self-examination to ensure that we do better – particularly in properly teaching and equipping our leaders to approach everyone in a loving and Biblical way, and with realism and balance.

I want to end by once more expressing my deepest regret to anyone we have hurt and urge concerned individuals to personally approach our leadership so we can seek healing, apologize where necessary and seek forgiveness and reconciliation.

If you have any questions/concerns, please call Jonathan at 510-753-0675, and we will be available to speak with you.

As for contacting them, I have a piece of advice for those who were abused (and I believe they were), do not approach them alone, if at all. These guys are not going to apologize. They want to get your name to see who is complaining. I can almost guarantee that they have consulted lawyers. I believe that reconciliation at this time is not in the cards if you get my drift.

Finally, if you want to know how the leaders might respond, Only Sky reports this response from a Gracepoint pastor.

But it is “Pastor Daniel,” mundanely known as Daniel Kim, who showed up this past February on the Gracepoint subreddit. At that time, he began a thread he titled “A plea from Gracepoint.” His plea, simply put, was for his church’s critics to shut up so Gracepoint could enjoy success with recruitment again. I’m not kidding. Here’s a sampling of what he wrote:

I don’t know if you know, but these reddit posts have caused quite a bit of damage to our church, and a lot of discouragement to our staff. . .

But what you’re doing on these reddit posts is actually doing quite a bit of damage to that goal [recruitment]. If your aim is to cripple our efforts at reaching the non-Christians on campus – well, I’m sad to say that you’re getting increasingly successful at it. It’s kind of working. . .

I just want to appeal to you. Do you really want to do this? At a time like this? When Christianity’s reputation across the land has hit a historical low, and everyone is losing trust in all institutions? . . .

Let’s seek a more constructive way to move toward talking about hurts and wrongs and misunderstandings.

A different response would be to report them to the various university/college administrations.

I have a suggestion. People who were hurt at each campus should get together, write up a document dealing with the particulars of the abuses, and present it to the university/college administration. I predict they will not be amused by what happened and might consider banning the group from campus. I think abused students might get a better response from the administration than dealing with the likes of Pastor Kim. Maybe then Gracepoint Ministries would actively seek to reconcile. 😉