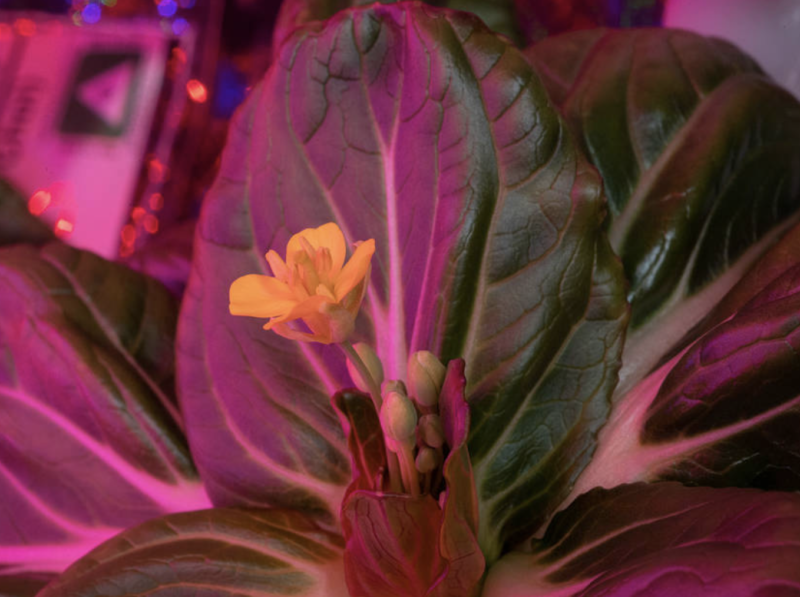 Constant Gardening on the Space Station-NASA

Recently, a few readers commented that Roger Olson advocated the use of church covenants: A Model for Church Discipline. There is difficulty in cutting and pasting at his blog so I will have to do this via screenshots.

He contends that there is little church discipline outside of near-cultic, fundamentalist-evangelical churches. Does this description nclude the SBC? Many SBC churches have covenants these days.

Who is Dr. Olson?

I think it might be helpful to understand Dr. Olson’s beliefs and history. When I first started blogging, several readers referred to his website as a place to learn about what an Arminian believes. At the time, I was expressing my frustration that Calvinistas had overtaken much of the theological writing found online. They were right. I am grateful for Olson’s writings. Here is what Olson says about himself. (Confounded protection does not allow me to cut and paste!)

He is the Foy Valentine Professor of Christian Theology of Ethics at the Truett Seminary at Baylor University. He has written a number of books, including my favorite: Against Calvinism: Rescuing God’s Reputation from Radical Reformed Theology. This book helped me at a time when I began to doubt that I could provide a counterargument to the John Piperesque, Calvinista thinking that was so prevalent.

Olson fundamentally defines Arminianism by God’s “limited” mode of providence and by God’s “predestination by foreknowledge” mode of election,[13] expressed another way :

““Arminianism,” […] is simply a term we use in theology for the view, held by some people before Arminius and many after him, that sinners who hear the gospel have the free will to accept or reject God’s offer of saving grace and that nobody is excluded by God from the possibility of salvation except those who freely exclude themselves.[14]

According to him, adherence to Classical Arminianism is defined by being classically Protestant, affirming total depravity, conditional election, unlimited atonement, prevenient grace, and that God is in no way, and by no means the author of sin and evil but that these are only permitted by him.[15] Olson’s definition, without taking a position on the conditional preservation of the saints, is close to the opinion of Arminius. His opinion was in fact expressed in The Five Articles of the Remonstrants (1610), mentioning both the necessity of perseverance and an uncertainty regarding the possibility of apostasy,[16] which was not removed by the Remonstrants until 1618.[17]

For Olson, “Classical Arminianism” as defined is centered on God’s Grace[14] and sovereignty,[18] and is intrinsically an evangelical theology.[19]

Olson also refers to “Classic Arminianism” as “evangelical synergism”:[20] “Synergism” referring to cooperation between God and creature (through prevenient grâce)[21] and “evangelical” to distinguish it from Catholic or Easter Orthodox synergism.[22] This is “because Arminius’ beliefs did not begin with him. For example, Anabaptist theologian Balthasar Hubmaier promoted much the same view nearly a century before Arminius”.[21][23]

Olson says that the first principle of Arminianism is “Jesus Christ as the full and perfect revelation of the character of God”.[24] This principle has a particular significance within the Calvinism-Armininian debate, where the character of God (and especially his love) as revealed by Jesus-Christ, is for Olson, better represented by the Arminian view:

“Basic to Arminianism is God’s love. The fundamental conflict between Calvinism and Arminianism is not sovereignty but God’s character. If Calvinism is true, God is the author of sin, evil, innocent suffering and hell. […] Let me repeat. The most basic issue is not providence or predestination or the sovereignty of God. The most basic issue is God’s character.”[25]

Olson says that, as a consequence of this point, Arminians only believe in libertarian free will to avoid making God the author of sin and evil, and because it is an experienced reality necessary for responsibility:

“Classical Arminianism does NOT say God never interferes with free will. It says God NEVER foreordains or renders certain evil. […] An Arminian COULD believe in divine dictation of Scripture and not do violence to his or her Arminian beliefs. […] Arminianism is not in love with libertarian free will –as if that were central in and of itself.”[26]

I think this sums up Olson’s arguments. It’s all about the character of God. He said what I was thinking and he said it well.

“Basic to Arminianism is God’s love. The fundamental conflict between Calvinism and Arminianism is not sovereignty but God’s character. If Calvinism is true, God is the author of sin, evil, innocent suffering and hell. […] Let me repeat. The most basic issue is not providence or predestination or the sovereignty of God. The most basic issue is God’s character.”[25]

Where does Olson go to church?

Olson, an ordained Baptist pastor, is a member of Calvary Baptist Church in Waco which he describes as a congregation in the Cooperative Baptist Fellowship. Here is a link to the church. The church has just called the Rev Hannah Coe to be their new pastor.

What is Olson’s experience when it comes to church covenants/discipline?

He does not have extensive experience with covenants or church discipline from what I could tell. From his post on Patheos

He goes onto describe a church which he attended that he claims is *slip-sliding* away from evangelicalism in terms of “doctrine and ethics/morality.* It is his belief that a church covenant will solidify the beliefs and practices of the members who sign a covenant.

” But I have noticed that in the last couple or three decades very few churches have any kind of church discipline process.”

Three out of five churches that I’ve attended in the past 30 years have had covenants. He obviously has a far different experience than I have.

Here is the covenant that he suggests to deal with this *slip-sliding* away from evangelicalism. 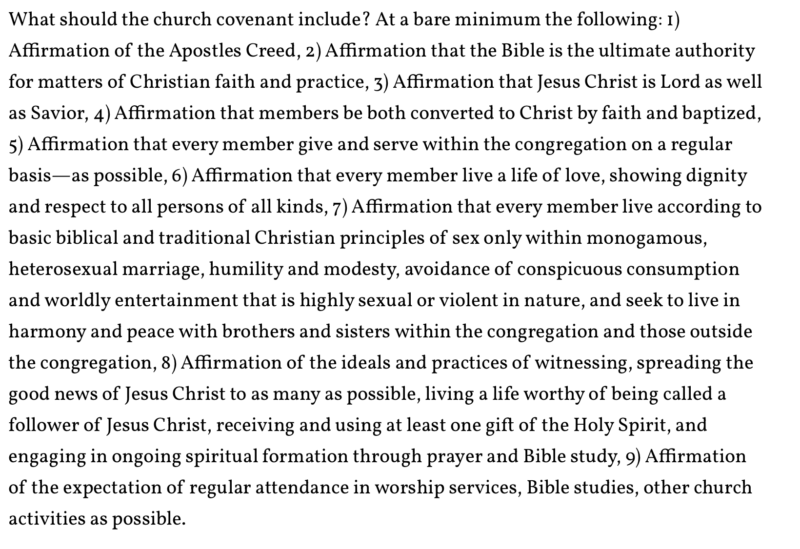 This covenant would be a requirement of church membership and overseen by the church elders (which includes women in his model.)

Possible problems with his model

An agreement: Spell out doctrines and beliefs prior to membership.

I do believe that it is good to spell out the beliefs and the doctrines of the church to potential members prior to their joining the church. I think the Apostles’ and Nicene Creeds are a good base. However, my Reformed SBC church demanded a belief in a Young Earth. I am a theistic evolutionist in my beliefs. Had I know about this prior to joining, I would have stayed away which would have prevented conflict.

Elders who are asked to make impossible determinations will make bad determinations. Also, elders who are put into positions to judge those *under* them, are at risk of thinking that they are in charge and above it all. This is what has happened in Acts 29, The Gospel Coalition churches and 9Marks churches. I have documented such stories for 12 years.

Dr. Olson says he doesn’t want to throw the baby out with the bathwater but what if the entire paradigm is screwed up? Maybe it’s time to rethink what the Bible means about discipline. The one instance mentioned in Corinthians was a man sleeping with his mother-in-law, a serious offense since the church was celebrating this relationship. Yet many instances of church discipline that I have documented involve ridiculous incidents such as the SBC pastor who disciplined a wife who wanted to divorce her child porn viewing husband. Also, the Bible never mentions church covenants. Maybe there’s a reason for that?

It is my opinion that Olson has not seen or heard of the number of abuses of church contracts (Yes, they are legal documents) that I have seen in my 12 years of writing this blog. Also, he has not thought of anything new. There is a reason that some churches have rejected church covenants. Olson is a professor. He knows how to do research and he needs to do lots more research in this area before writing more on this matter. Everything he suggests has been done and it’s often been done very badly. What’s that old saw? First, seek to understand?” (I am willing to help.)