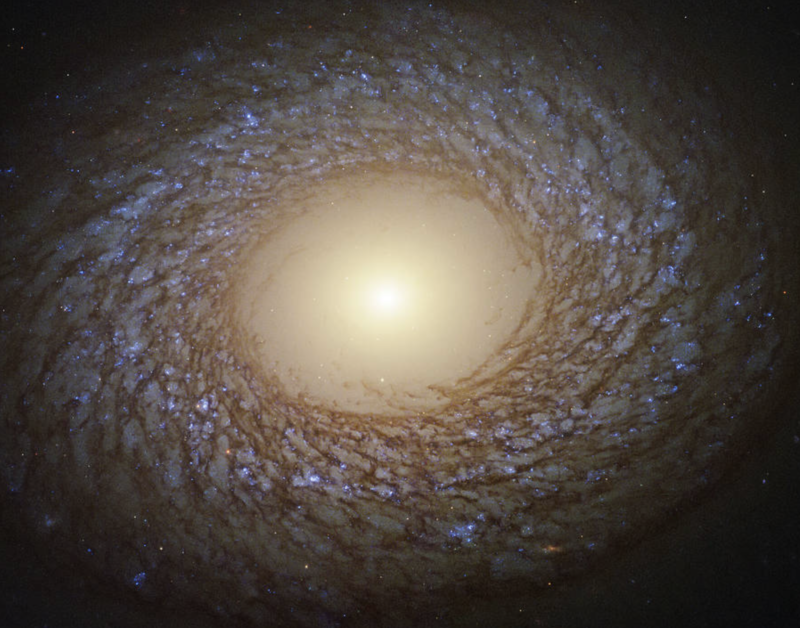 NGC 2775 is classified as a fluffy looking spiral galaxy-NASA

“It is amazing how complete is the delusion that beauty is goodness.” ― Leo Tolstoy, The Kreutzer Sonata

Please join me in praying for TWW friends: Amy Smith, Anna Keith, Shawnie Beth, Amy Moore, Rachel Green Miller, and Mitch Little. They are in Texas and are enduring the startlingly massive ice and snow storm accompanies by incredibly low temperatures.  Their power grid has been taxed and many have been without electricity and heat. Amy Smith’s area has been told to boil their water as the water delivery system has been failing as well. Love you guys!

There is a term that is being used on social media that is quite helpful. *Sin-leveling.* This is something that is often seen in Calvinista circles. Basically, it means that all sin is equal in God’s eyes. Except, even a cursory reading of the Old Testament, will inform the curious that there are different punishments for different violations of the law. Even our judicial system has various punishments for various crimes.

Carter does a good job outlining the findings of the law firm that investigated RZIM. Here are a couple of statements from the post that I want to focus on. The bold highlights were put there by me for emphasis.

Carter then makes the argument that this is all about *cheap grace.* He quotes Bonhoeffer of whom I am a fan.

Here is where he makes his biggest mistake.

What is his mistake?

Carter puts the incredible and extensive depravity of RZ’s actions into a category of “we are just as vulnerable to such sin as any celebrity.*  Really? Are RZ’s actions indicative of garden variety, besetting sins of average Christians? Let’s look at these normal sins…

The savvy readers of TWW are already predicting what I am about to say. However, just so you don’t think these thoughts are limited to Joe Carter, here are more examples. Call me naive but I don’t think many of us are involved in such prolific, depraved activities.

Collin Hansen wrote, for The Gospel Coalition website, Ravi Zacharias and the Judgment of God

Let me remind you, Carter and Hansen are not some pastors they found to write a post about RZ. Hansen is the editor-in-chief for TGC and Carter is an editor for TGC. It is my opinion that they represent the shared viewpoint of many leaders who run in these circles. We need to pay attention to what these two say since it will help us to understand the view of their associates on the issues surrounding RZ’s incredible depravity. Is it just a simple sin issue as they seem to indicate?

One thing that I don’t understand is the surprise that is being expressed by these men, their friends, and those who worked for RZIM. Do they read their Bibles? Aren’t the Scriptures replete with examples of men who did really bad things? Frankly, I was not surprised in the least. In 2015, a cursory look at RZ’s biography made me realize that he was a serial liar and that there would be other stories to come. Yet those who surrounded RZ and those who asked him to speak, etc. didn’t do what I had done which was to look up to his biography and see if it was true. The information was readily available. We are left with a question. Why didn’t they do the same? Or, even more concerning, did they know and cover it up?

RZIM and BFFs knew that he lied about his bio. Yet, they never seemed to ask any more questions. They never asked why a guy needs 24/7 access to massage therapists. They ignored what was readily available. Were they just too lazy to check it out for themselves? Or did they already suspect and didn’t want to rock the boat? There is no excuse, no matter the answer.

And he had to get the old *submit and obey* in there. The TGC crowd expects it.

In the meantime, even he had to admit that Zacharias probably had help in keeping things on the down-low.

Hansen makes a good point here even though he, as well as Carter, missed the even bigger problem.

He sums it up and almost gets there but he whiffed it.

Micheal Brown, writing for the Christian Post penned How should we respond to the Ravi Zacharias scandal?

Here are some of his thoughts. He doesn’t quite get there either.

He’s close to the answer at the beginning of the next statement but veered away.

He is getting there with the *get help* admonition but I bet he would disagree with me on my conclusion.

I agree with what he says here.

What did they miss? Ravi Zacharias had a profound psychiatric problem that affected him for most, if not all,  of his life.

Folks, sexual abuse is a sin, of course. But RZ’s issue went far deeper and I am having trouble finding anyone who recognizes what is going on here. ACBC (aka biblical counseling) loves to put everything under the category of simple sin. Then the solution is simple. *Just stop it.* However, intelligent people who have worked with those of have serious mental illness understand that *stopping it* is not as simple as it sounds. For some, it proves impossible, even with tremendous help and support.

RZ appears to have had some form of paraphilia. I keep referring to this paper posted on the National Institutes of Health website: Paraphilias: definition, diagnosis, and treatment, RZ’s acts were quite possibly criminal if he was involved in molesting massage therapists. Also, how sure is RZIM that all pictures of females were of females of consenting age? This behavior went on for years and involved an untold number of women.  RZ knew he was doing wrong if he truly believed in the Bible. He likely didn’t want to stop the behavior and probably could not stop it without serious intervention. He knew all sorts of people and could have received the medical and psychiatric intervention he needed. However, his behavior was so ingrained that it is quite possible that he could have had difficulty controlling his behavior, even with expert professional help.

Does anyone actually believe that the *weekend warrior* poorly trained *biblical counselors* are equipped to intervene in such an intense psychiatric problem as RZ?

Owen Strachan and friends appear to believe that, at any moment, we could all become serial molesters, and therein lies the problem.

My friend, Christine Pack nailed it on Twitter. Owen Strachan, another one of the TGC/CBMW brigade, said something silly, and Pack called him on it. 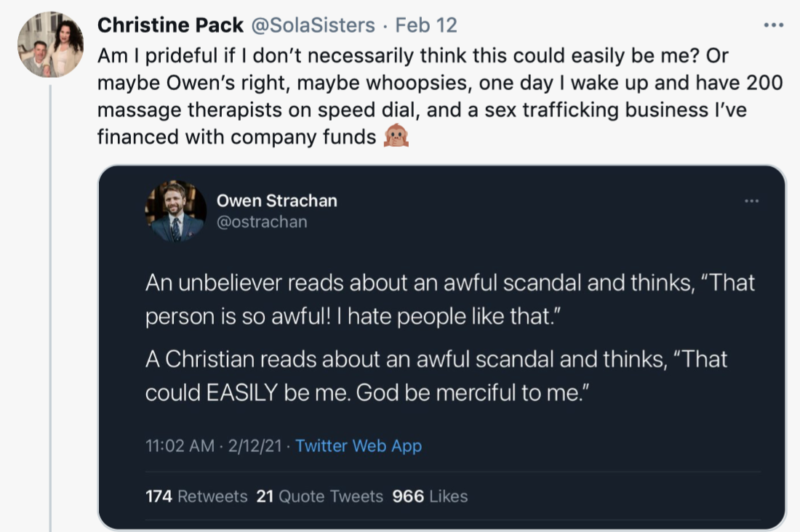 Owen Strachan and The Gospel Coalition do not appear to understand the difference between simple sin and sin compounded by complex psychiatric illness. There is no question in my mind that RZ was a deeply sick man. It should be obvious to everyone else as well.

I think we have to deal with the fact that there are probably a fair number of molesters who are involved in Christian ministry. We all have a responsibility to make sure that leaders are who they say they are. And the next time some pastor claims he needs a full-time masseuse, dump him quickly.