"With power comes the abuse of power. And where there are bosses, there are crazy bosses. It's nothing new." Judd Rose link 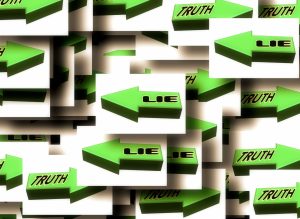 We interrupt our website rebuilding to further discuss Joe Carter's post Beware of Broken Wolves. As you know, Joe Carter said that this post wasn't about us. A person left a comment on his blog asking if he was specifically referring to us or Spiritual Sounding Board. Joe denied this and I believe him in regards tp his initially published post. Unfortunately Joe decided to take this opportunity to go after TWW. Not only that, he initiated a Twitter war with Dee and got himself into a bit of hot water. 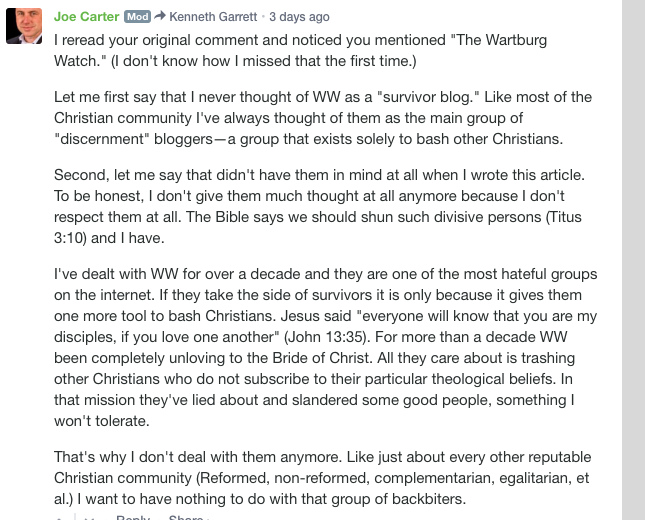 Thanks to our friends.

First and foremost, I want to thank our many friends who rose to the occasion, leaving comments which questioned his entire premise. Some of you guys really do theology well!

Joe Carter tried to hurt Dee and Janet Mefferd on Twitter. He actually admitted it.

Here is what happened. I was asleep when things exploded. Unbeknownst to me, Carter came onto Twitter with a goal in mind. Eric catches on and calls him on it.

He proceeded to ask me what I believe about homosexuality and reparative therapy.

I am pretty sure that Carter had no idea that I wrote extensively on this subject quite a while ago. But, those posts were not highly discussed except on this blog. It looks like they flew under his radar and he didn't Google before he decided to *trap* me.

Here were my answers after I woke up and got home from church which we attended this week in the morning instead of Saturday evening.

3. He asked if I thought unrepentant homosexuals would go to heaven.

My answer is one that TWW readers will recognize. I leave the matter of who gets into heaven in the capable hand of our Father who does not need or desire my advice. I wonder if TGC thinks God could use their help?

Joe White and TGC seem to be fixated on this subject and I, for one, am getting tired of it. Joe gave an example of what he had in mind by *Broken Wolves.*

I am sick to death about the chronic fixation on homosexuality by TGC while they ardently continuing to defend the indefensible when it comes to things like CJ Mahaney/SGM situation. In the midst of the Twitter feeds there were some who questioned him on his support of Mahaney. Carter still stands by him. He also expressed concern that TWW doesn't seem to understand that TGC is against child sex abuse. Seriously?!!!

Why is Joe Carter so mad at TWW? We believe it is about CJ Mahaney.

The Christian Post wrote The Gospel Coalition, Christian Bloggers Spar Over Sovereign Grace Ministry, C.J. Mahaney on Twitter Sadly this conversation, begin with great hope on my part, ended in a similar fashion to that conversation.

In one tweet, Carter suggested that Parsons, Hoag and Julie Ann, a spiritual abuse watchdog blogger, were "pathologically dishonest."

After Parsons asked him to clarify what "slander" he was referring to, Carter responded "Have you not intimated that CJM was involved in a coverup of sexual abuse?" linking to a recent post on her site where a guest blogger claimed that Mahaney was guilty.

…Carter challenged Parsons, arguing that by publishing posts which argued that the civil lawsuit was true, she was still defaming Mahaney and other SGM leaders' reputations.

"So accusing someone of covering up pedophilia does not hurt their reputation?" he asked. "So how is 'I believe it, I can publicly repeat it' not gossip? Is that the Christians standard now?"

…Parsons told CP that she thought she addressed Carter in a way that was "very matter of fact" and "no animosity," inviting him to see if he wanted to meet with one of Morales' victims.

"I made that offer two times," said Parsons. "Joe Carter did not respond to me, and then on Saturday he turned the tables on me and mentioned slander and lawsuits and one of the tweets said, I could be sued for what I said."

This exchange made me sad and left me with a couple of questions.

-Why is CJ Mahaney and SGM so important to TGC?
-Why is homosexuality the hot button issue for TGC, CBMW, etc. Did you see their new organization? Why nothings about child sex abuse if they are so gosh darn concerned?

-Why is Joe Carter so angry at TWW? Perhaps we are having some impact on the injustice found in cover up child sex abuse, downplaying        domestic violence, membership contracts and church discipline.
-Does the TGC council believe that this sort of exchange reflects well on their organization?
-Will Joe Carter be made to prove that TWW lies.
-Do the women who support TGC believe that this sort of exchange with a women is indicative of how women are treated in TGC and related groups?

My summation for the current exchange with Joe Carter, is taken from, oddly, The Christian Post from 3 years ago.

Parsons said she was disappointed with how the interaction with Carter transpired.

"I really wanted to build a bridge [with Joe] and that was my goal and my hope and that's since been destroyed. And that's where I stand," said Parsons. "I had no animosity to Joe Carter in that exchange. I looked at it as the potential for positive opportunity to bring understanding in this whole mess and I'm actually very sad."

Here are some comments by readers on Joe Carter's now infamous post on Beware of Broken Wolves.

Thank you all for your kindness. 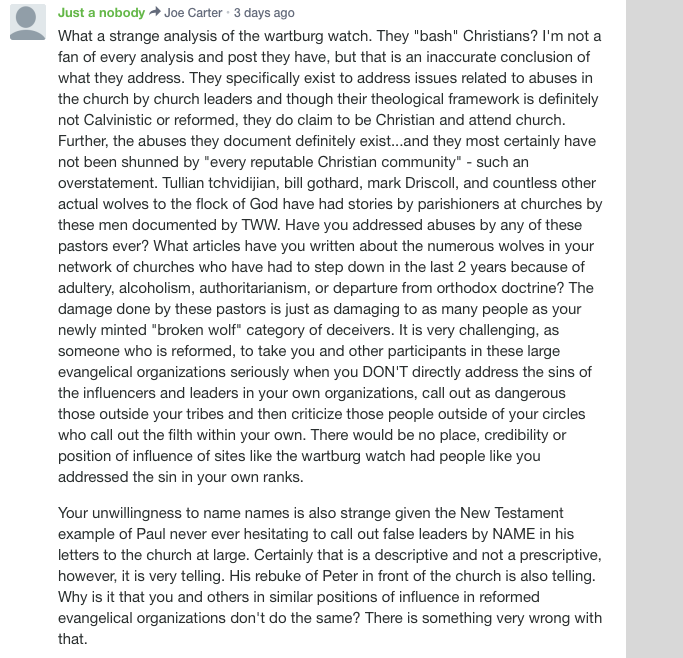 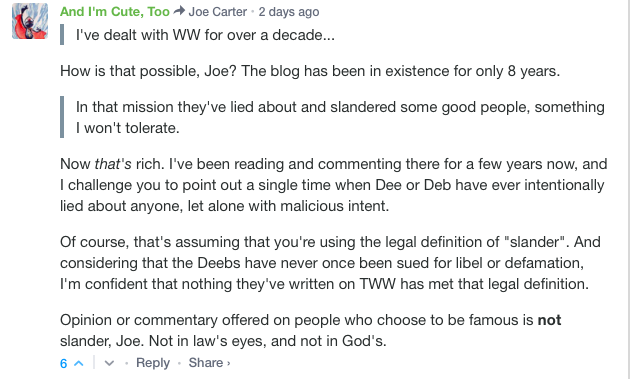 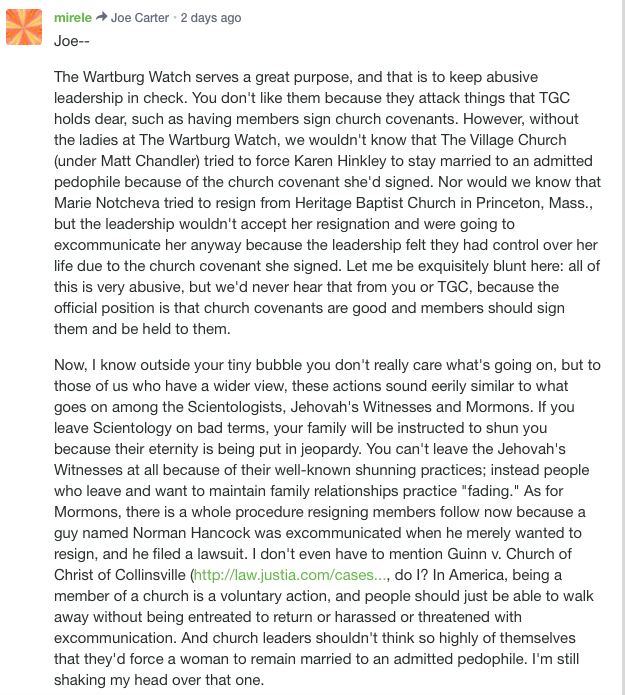 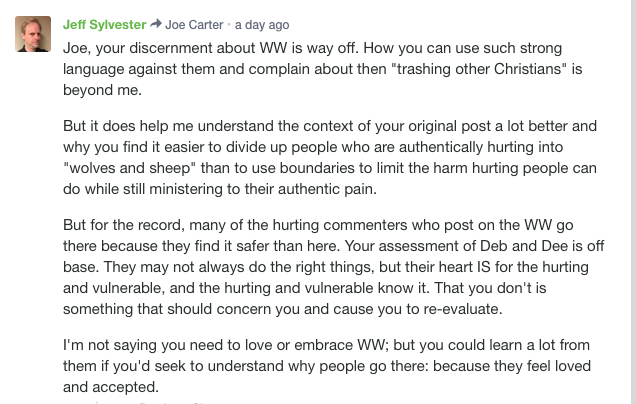 And the weirdest comment of the Carter post awarded to the dude who chalks this up to a demonic phenomena!