“You’re a coward. And you’re not a pastor, but a Pontius Pilate politician. You’re not going to be able to wash your hands from the responsibility of supporting Glynn and abandoning me and my family.”
-Keith Daukas addressing Sovereign Grace Churches leader, Rich Richardson 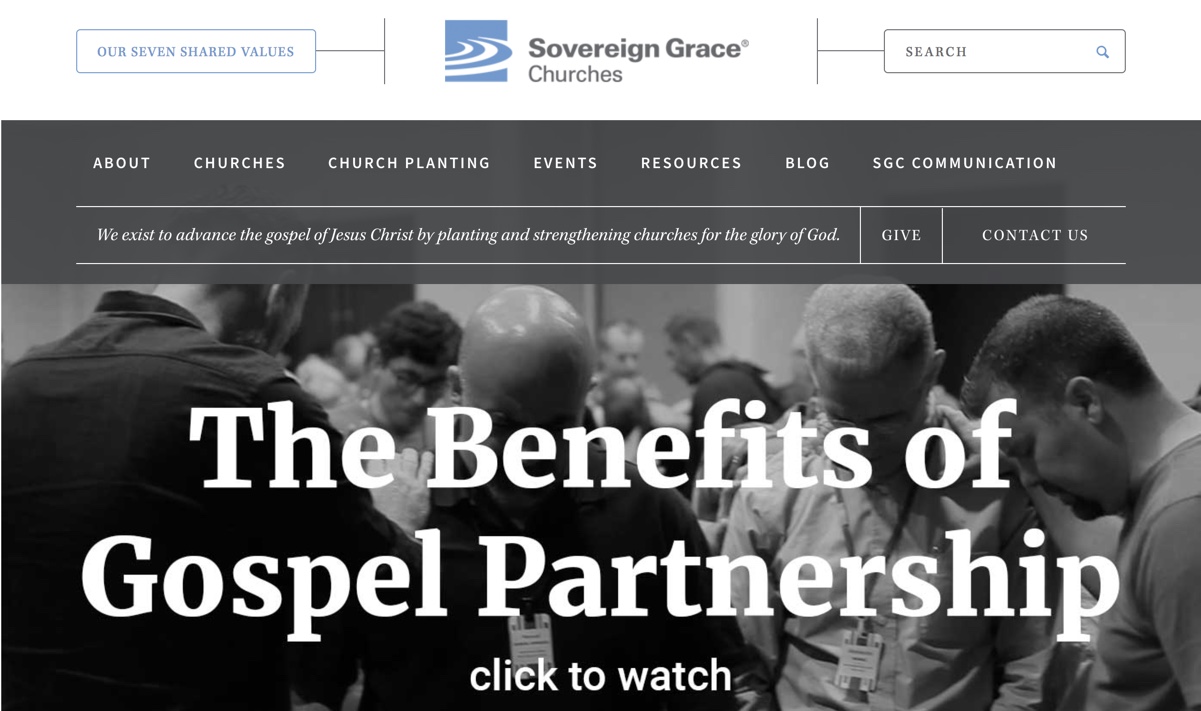 Keith Daukas and I have both been members of Sovereign Grace Church of Gilbert. (They changed their name to “Center Church” in January of 2020, undoubtedly in an effort to reduce the number of negative responses a potential new member would see when they Googled “Sovereign Grace.”) I believe Keith and I had a slight overlap in our time at Sovereign Grace Church of Gilbert/Center Church.  I left Sovereign Grace in 2005, but more on that later. I think Keith started attending in 2004. I never knew him, though I did know his brother, Chris Daukas. Chris was an assistant pastor whom I really liked and respected. In a group of men that included Regional Director (and former apostle), Steve Shank, Senior pastor Rich Richardson, Rich’s dad, Trey Richardson, Jon Payne (son of Pete Payne, a longtime Sovereign Grace pastor and good friend of C.J. Mahaney), and Glynn McKenzie. Chris Daukas was by far the most gifted preacher, but he rarely seemed to be given an opportunity to preach. At the time I couldn’t understand why, but over time I grew wiser in the ways of Sovereign Grace. I now understand the politics involved in nearly everything that happens in the corrupt denomination.

I am very thankful that Keith Daukas has chosen to speak out regarding the spiritual abuse he suffered while an intern at Grace Community Church, a member church of the Sovereign Grace Churches denomination.  To do so took courage. Most pastors that leave SGC churches, or whose church resigns from the SGC denomination, do so quietly. This is encouraged by the leadership of SGC, they call it “leaving well.”  (See here and here for recent examples.) I suppose some have valid reasons for not speaking up, others are pragmatic politicians, others are cowards.

Keith’s voice is a reassuring word from the Lord to me and scores of others who have been dealt with harshly by Sovereign Grace pastors. My perceptions of what was going on at Sovereign Grace were accurate. My departure was justified.

Briefly, the last straw for me at Sovereign Grace Church of Gilbert occurred in a meeting with Glynn McKenzie. We had been attending a care group and over time the group had grown larger. The decision was made to split the group. About one dozen of us were told we would now be part of the new group. There was no input on the decision from those affected. The new care group leader was a hard-core “sin sniffer” by which I mean every meeting had a time where the leader interrogated each individual in attendance, asking them to reveal what sin or sins they were struggling with since our last meeting. Now, being born and raised in Minnesota, where we practiced social distancing since the days the Norwegians immigrated to a land that reminded them of home, having these types of conversations with a group of men and women whom I barely knew was something I didn’t do. I think I read about it in Dante’s Inferno because that was something I would only expect to encounter in hell! So I would mumble something about being the worst sinner I know and then confess to a few rolling stops and exceeding the speed limit a time or two, but God in his great mercy chose to show me grace over the past few weeks by having no law enforcement anywhere near me when I exercised such great indiscretions. I only jest. Sort of.

It appears there were many others in my new care group who must have also grown up in Minnesota because, over time, attendance started shrinking. It got to the point that our overlords decided to disband the care group. We were notified of the decision and were also told that Glynn McKenzie (whom I now refer to as the Care Group Nazi) wanted to have a private meeting with each couple. When the time came for our interrogation by Glynn, it was not pretty.  My wife does not like confrontation of any kind, therefore, as I recall, she didn’t have much to say, but much to her dismay, I did. I could tell Glynn was used to running rough-shod over people and he took any questions as a direct threat to his authority.  I won’t bore you with all the particulars, even though I can recall them quite specifically. Suffice it to say that the humble servant-pastor blew a gasket when I dared confront him on some issues. He screamed at me, stating that care groups were an integral part of the church and if I wasn’t going to attend I should find a different church! No joke.

We hung on for a short time, looking back I have no idea why. But I knew after that meeting we were done. I did have a short conversation with senior pastor Rich Richardson about the meeting and Glynn apologized to me soon after that.  Perhaps you can imagine my surprise when I heard several years later that Glynn had become the senior pastor of Grace Community Church in Westminster, CO! Again, this had more to do with politics than qualifications. You see, Glynn was well-liked by Regional leader/former apostle Steve Shank, and that was all that mattered. Those of you who are familiar with the Sovereign Grace story may recall that Shank and Mahaney were at one time very tight. Shank put out a briefing to all the other apostles that after consulting with an attorney he advised against C.J. Mahaney attempting to blackmail Larry Tomczak by revealing his child’s indiscretions, confessed to Mahaney in a private counseling session. I find it odd that “apostles” would need the advice of an attorney on that matter, but hey, God works in mysterious ways!

Keith tells of how he had barely been in the job when Glynn McKenzie took a three-month sabbatical, leaving Keith as the only pastor! Then as things spiraled out of control with Glynn at the helm, he was given a total of one year off – all the while collecting his full paycheck and benefits! Then when he came back to work Glynn told the other elders that he no longer agreed with everything doctrinally that he had signed off on earlier. (The specifics were not mentioned.) Eventually, Glynn resigned and was given three months of severance pay. By my count, Glynn received 18 months’ pay over the course of 3 years for not doing squat! As I always say, if a guy has no conscience, pastoring can be quite a gig.

Keith was supposed to only be an intern for 18 months. It ended up being four years. He was working 70 hours per week and his yearly salary was $39K. Keith paid $1,600 per month for a two-bedroom, 1,000 square foot apartment, leaving them $1,400 to live off each month in Denver, where the cost of living is high. He had a wife and three boys and they were barely surviving, but the dolts in charge never considered boosting his pay. (First Glynn McKenzie and then Tony Walsh and Peter Payne.) Keith and Carrie Daukas suffered through stress resulting in physical ailments while being lied to by the pastors. Promises were broken and nobody in leadership roles in the denomination (Rich Richardson) attempted to straighten out a terrible church. Membership has plummeted from over 400 when Keith arrived to around 100 now.

The final straw for Keith occurred after Glynn McKenzie had left the church. He was about to be ordained, having passed all the tests, both written and oral, but when meeting with Pete Payne it was made clear to him that unless he started spanking his kids for not standing during worship services and forcing them to read the bible, he wouldn’t make the grade as a pastor. I can’t help but wonder if Pete Payne was intentionally attempting to get rid of Keith so he could hire his son, Josh Payne, who now appears to be a staff member. 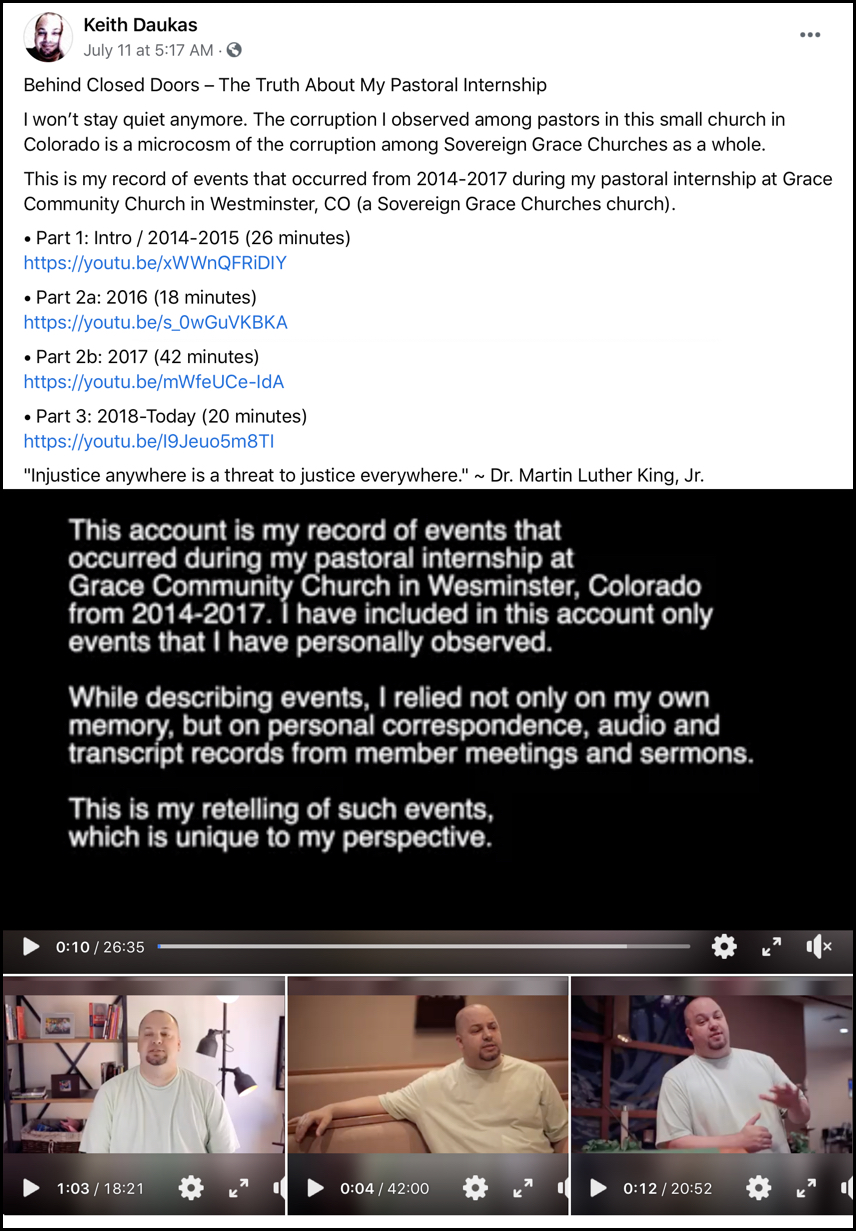 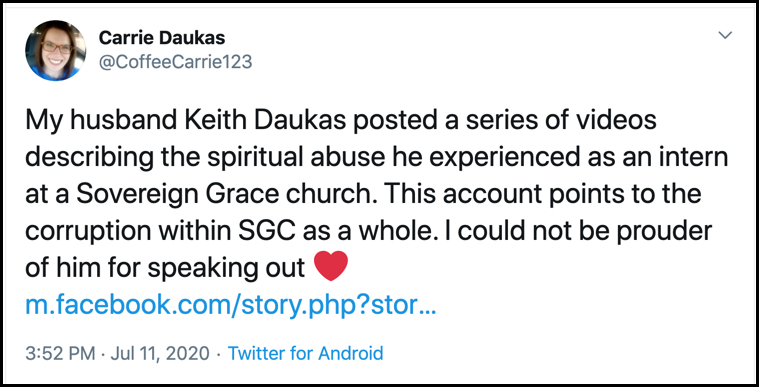 Below is a display of some of the major players in Keith’s story. Since Keith has left it looks like Pete Payne has added his son, Josh Payne to the staff. His other son, Jon, was an assistant pastor to Rich Richardson and then was sent to plant a church in Texas. Nepotism, modeled so well by C.J. Mahaney, is alive and well in the small SGC denomination! 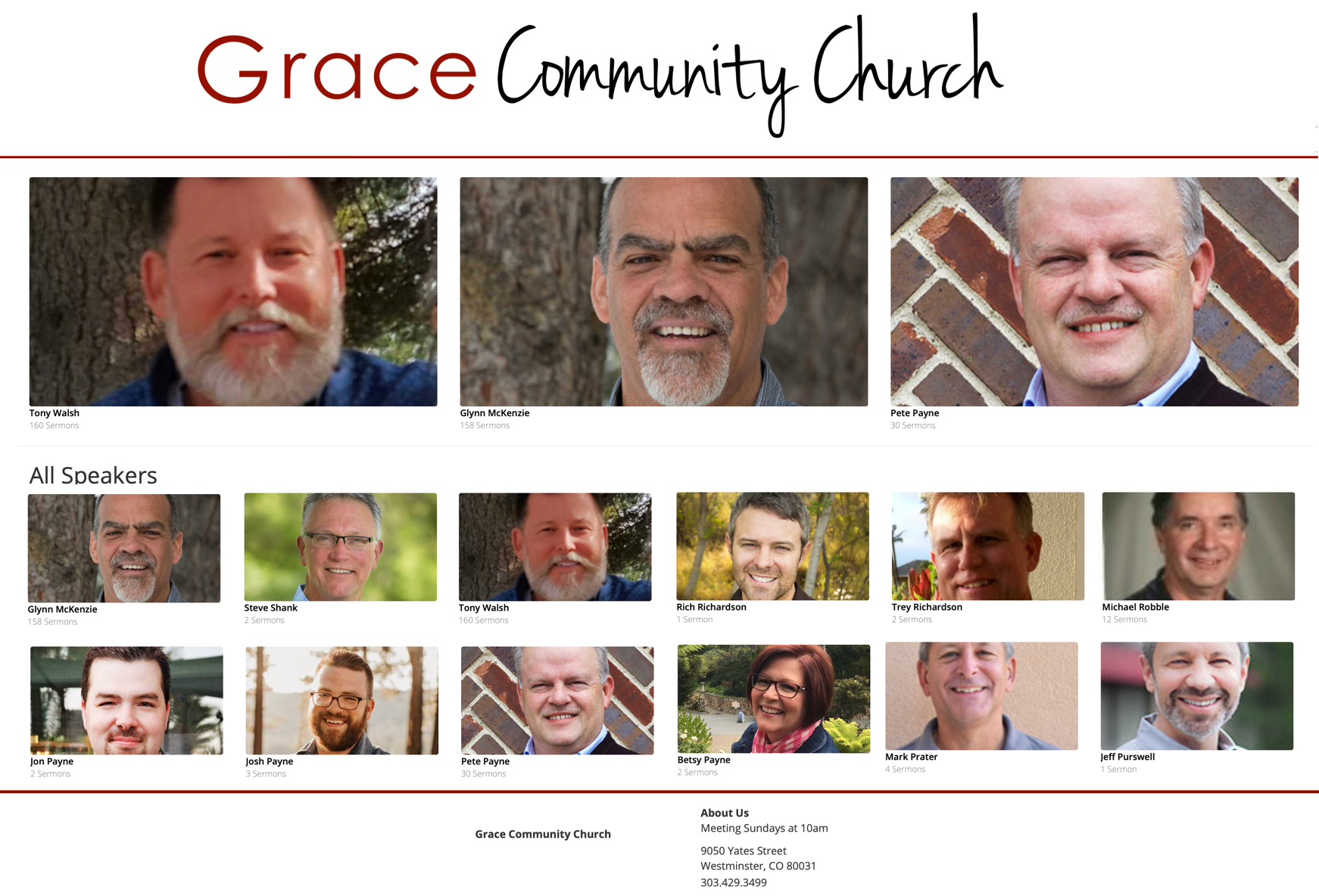 Below is a partial transcript from the video above.

Once it became politically safe for you to speak out against Glynn’s ministry, that is, once Glynn was removed from the office of pastoral ministry in the Spring of ’17 then you went to Tony… You apologized to Tony for even sending Glynn out…

You didn’t want to deal with someone who wasn’t a “yes man.” You apologized to Tony, but not to me.

Thanks for taking the expedient route and playing it safe. On behalf of literally hundreds of families that experienced significant damage under Glynn’s ministry, thank you Rich, great job! You’ll have to answer to God for all this. You don’t have to answer to me, obviously. You won’t even return my calls or my emails.

One day, very soon you will have to answer to God for this…

You’re a coward. And you’re not a pastor, but a Pontius Pilate politician. You’re not going to be able to wash your hands from the responsibility of supporting Glynn and abandoning me and my family.

It’s just double talk, it’s just the stuff I’ve come to know from you and it’s sad. You used to be a good pastor. I don’t know what happened to you, but I hope that one day God will break through your cold, calloused heart and soften you. That’s just sad.” 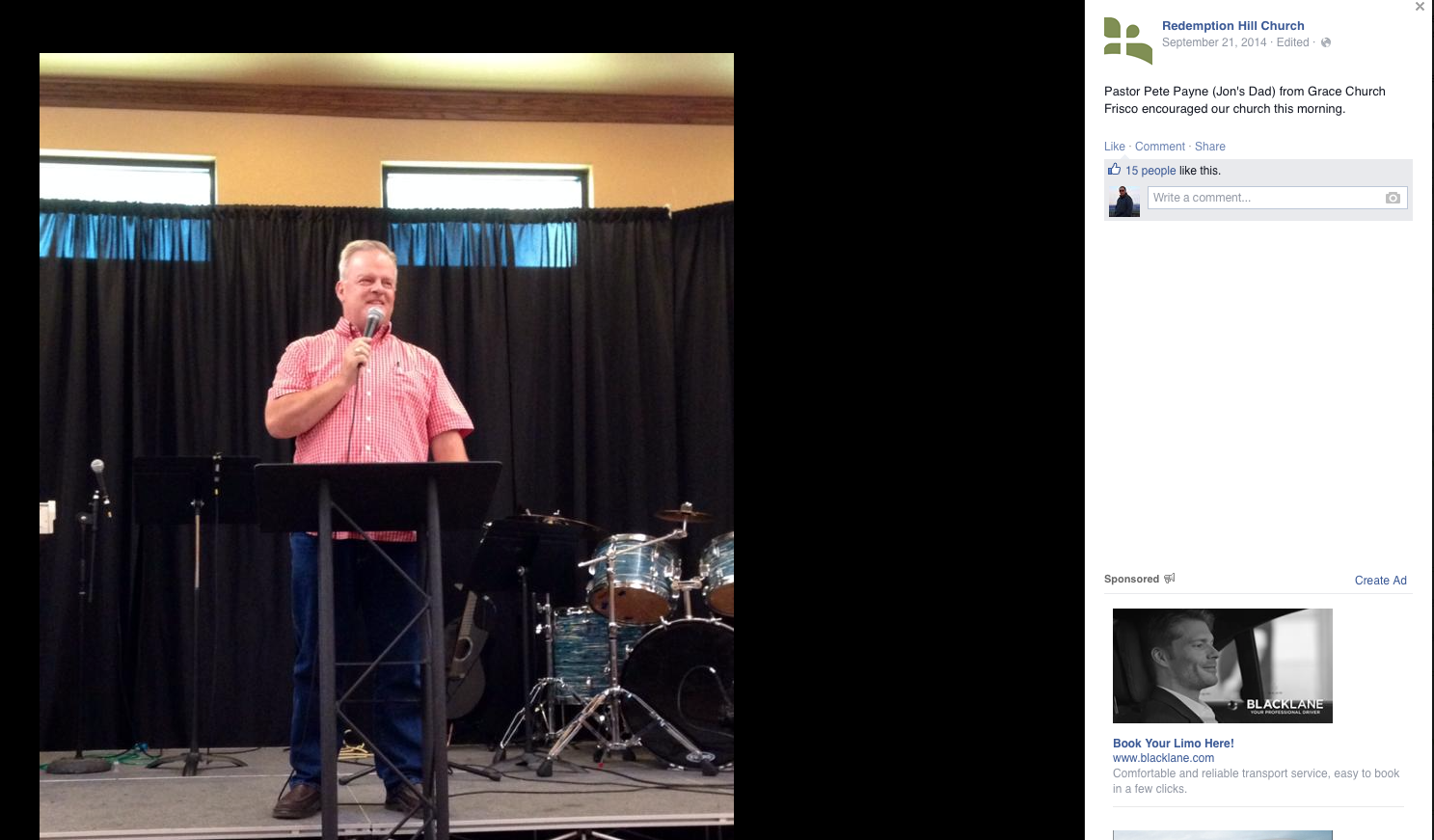 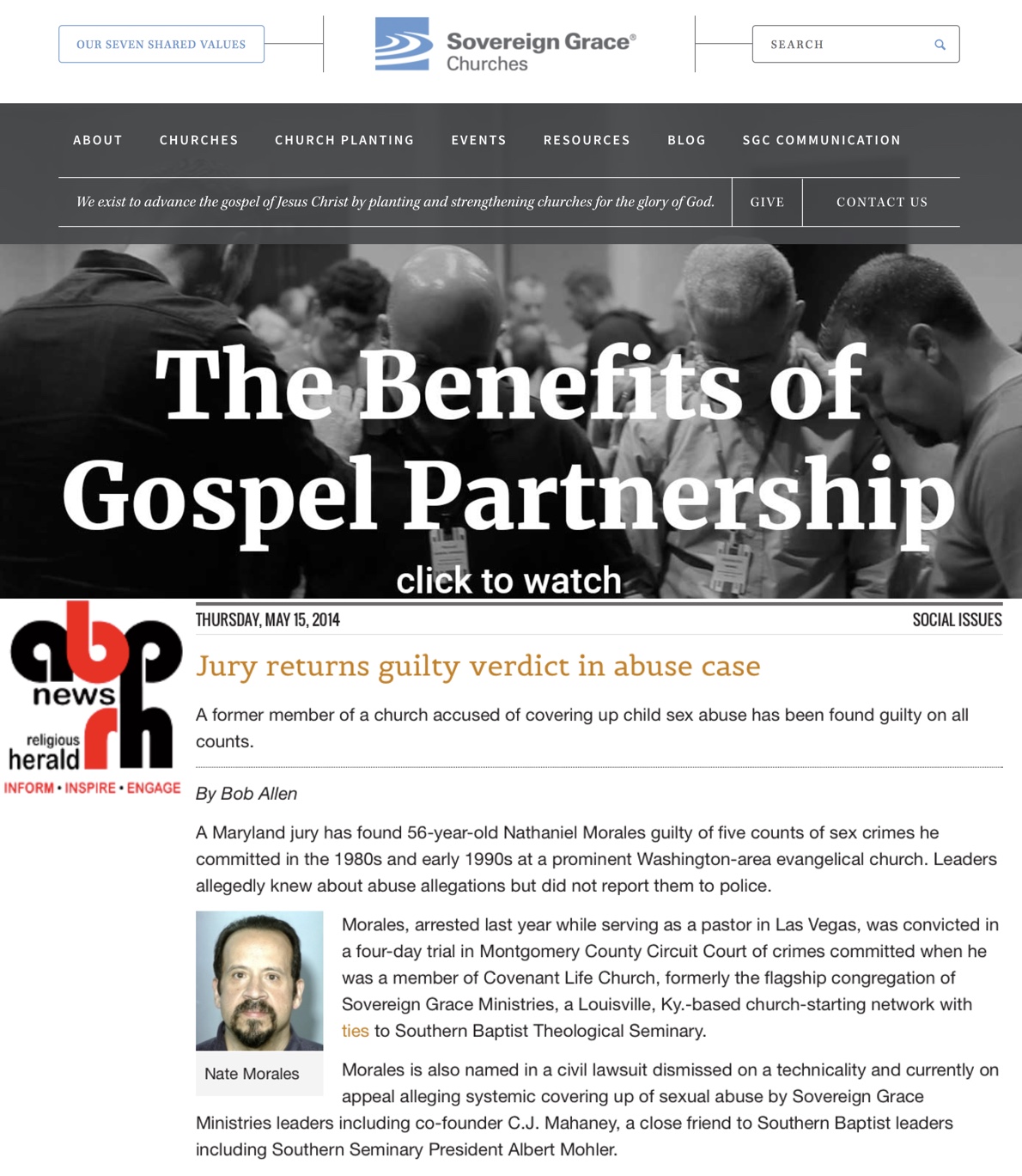 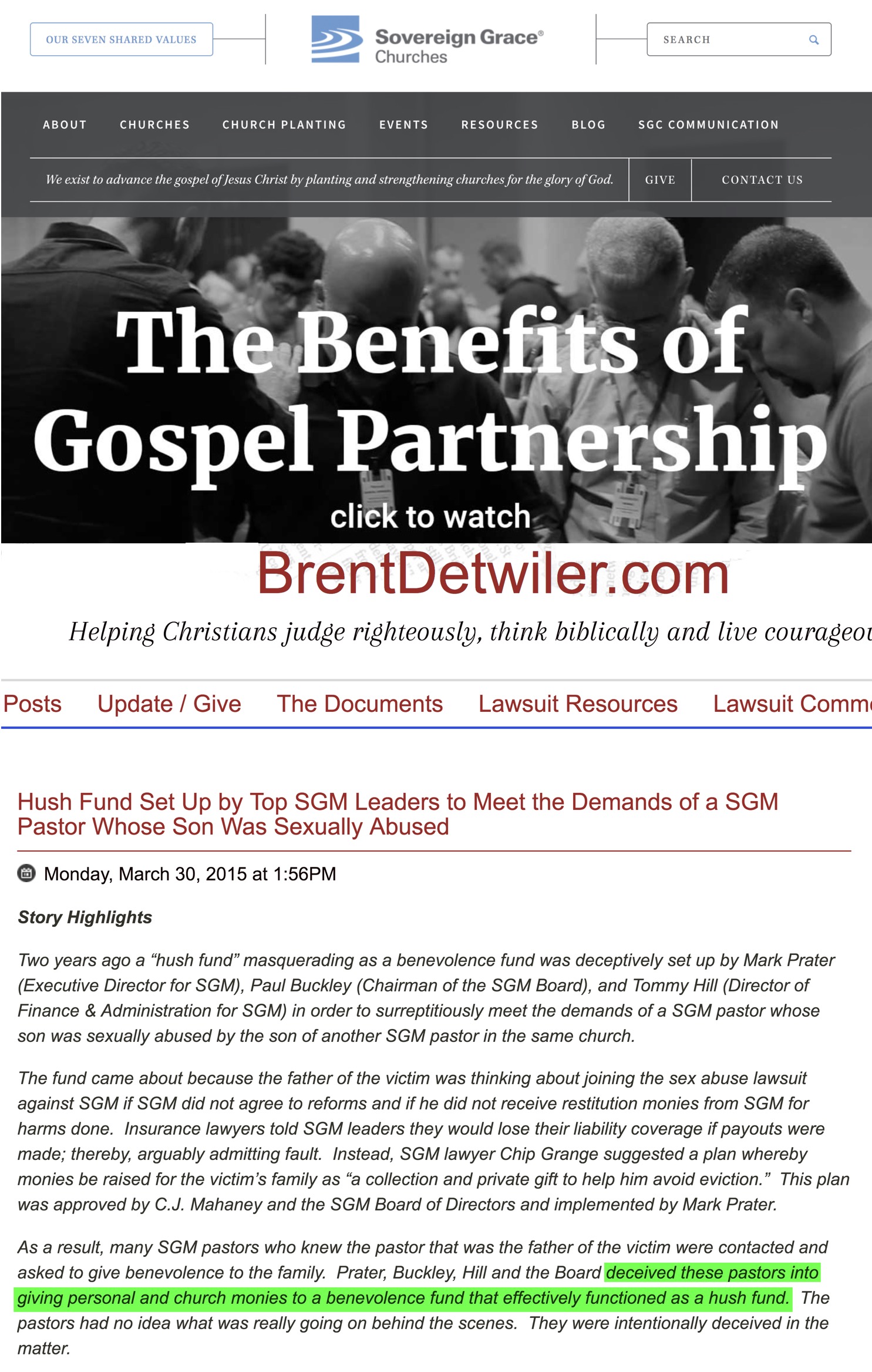 Trigger Alert – paragraphs from the lawsuit displayed below contain graphic descriptions of sexual abuse of a child. After I posted this Jon Payne removed the picture above from the web. Perhaps allowing John Loftness to speak in your church is not such a great benefit of a partnership with Sovereign Grace after all?

One final note – there is another group that wants to tell everyone what a benefit it is to join ranks with them. How’s that working out for you John? 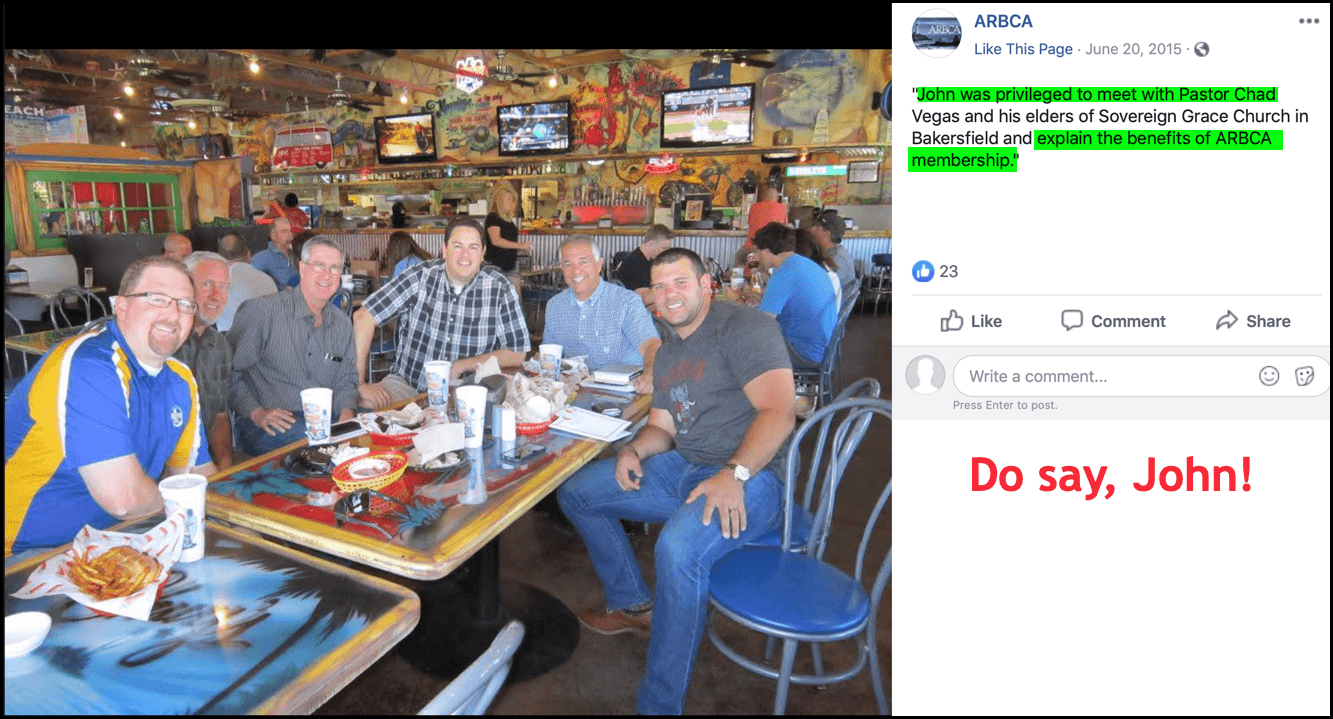