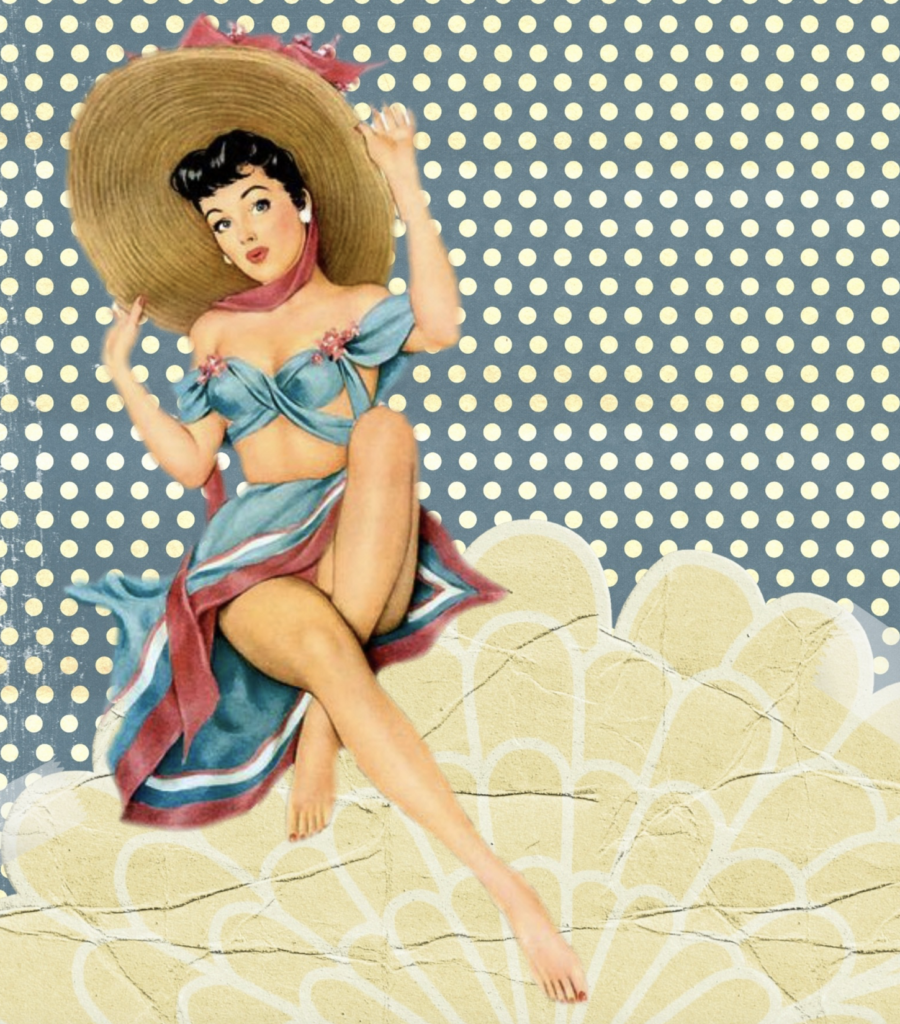 Special thanks to Todd who did some background work on this post even though it was 122F in Phoenix yesterday.

On Monday I wrote Steve Gaines and Bellevue Baptist Church Are Getting Sued: I Want to Hear Less About Them and More About Showing Compassion for the Teen Victim. At the time, I had a copy of the lawsuit which was filed by the Doe family.

The Doe family sued BBC on behalf of Janet Doe, a 15-year-old teen who was molested by James Ashley Hook. Jane Doe, Janet’s mother, had an affair with James Hook, who was also married. This affair resulted in a child. However, the church encouraged both couples to undergo *Biblical* counseling. It is simply amazing what one can learn when reading through a lawsuit. For your convenience, you will find the entire lawsuit filed by the Doe Family at the end of this post along with a direct link to the response of Belleview Baptist Church.

Eric Brand and his bizarre ministry

Eric Brand, a BBC pastor, became the *Biblical* counselor to the Hooks and the Does. But, who exactly is he? Brand was allegedly a long time Christian leader at BBC. Some folks think he had been around since the time of Adrian Rogers who retired from in 2005. Brand is not listed on the website at this time. I wonder why…

This is odd since it appears he often gave sermons on Sunday evening as evidenced by my Google search. However, all such sermons have disappeared from the website. I have heard from several sources that they began disappearing about the time the lawsuit was filed.

The accusations against Eric Brand by the Doe family.

Please refer specifically to items 21-24 in the lawsuit against Bellevue Baptist Church, hereafter called BBC. Here is a screenshot. Be prepared. 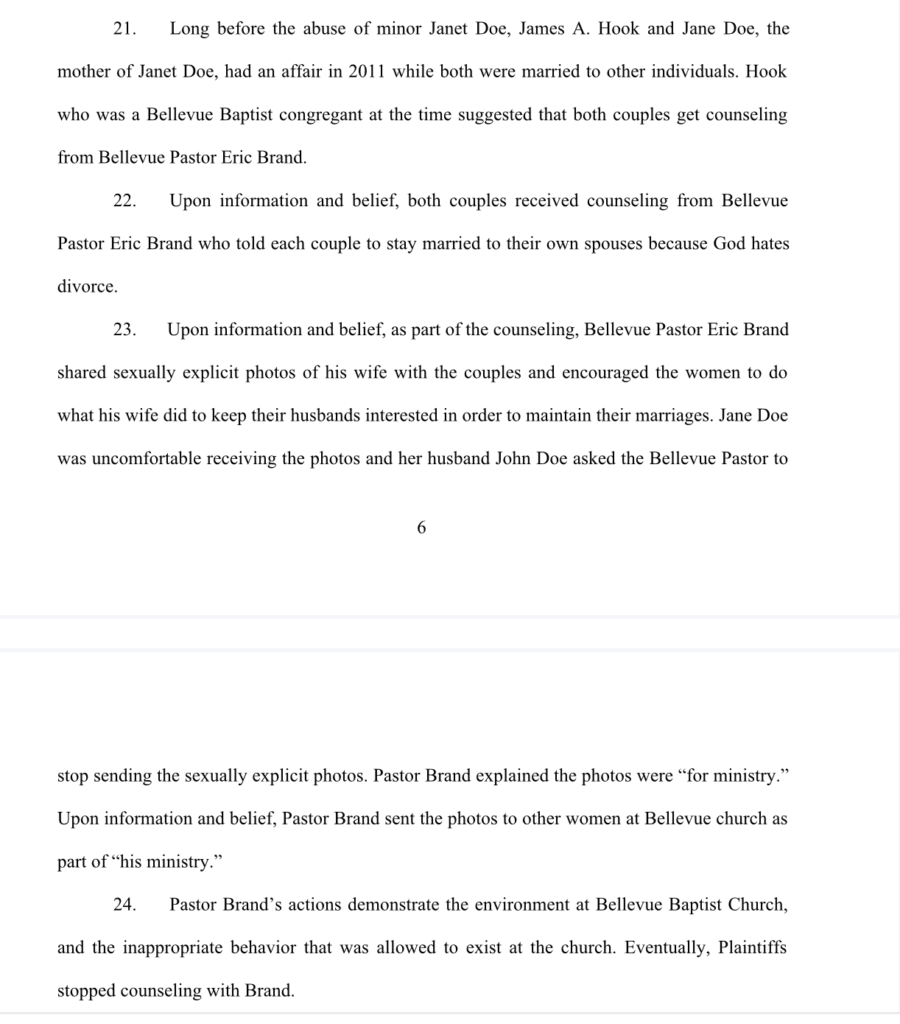 Let’s go through the allegations one by one.

I believe that it is abusive for a pastor to show sexually-oriented pictures of his wife to those he is counseling.

These poor folks were trapped in a room, supposedly getting counseling to save their marriage. Then, Pastor Brand whips out sexually explicit, inappropriate pictures of his wife. How is this not abusive? How does it have anything to do with counseling? How could this even be considered *ministry?* In my opinion, showing such pictures in this situation, is abusive and bizarre. Did I remember to say *abusive?*

It appears that someone reported Brand’s unique take on Biblical counseling to *whoever was in charge.* My guess he was canned on the spot. However, after doing extensive reading, I cannot find that this was ever announced to the church. Given Gaines’ history with Paul Williams, this response would not be unexpected. Gaines appears to like to play things close to the (his) vest. If anyone could give me proof that Gaines told the members of the church, I would be willing to post it and correct my thoughts on the matter. I suspect he told people who may have reported it to him to keep it on the down-low.

How big is BBC and why does that matter?

I keep hearing all about membership in the range of 25,000-30,000. I guess they live too close to the beach because according to The Commercial Appeal, only about 8,000 actually attend. I would imagine they had a few drop out if they went to  Brand and he played his “Let me show you pictures of my ministry game.” Or would that increase attendance…who knows?

The reason I bring up the size is important. I contend that most megachurches are not able to keep tabs on what is really going on in their ministry, especially during the weekend worship services. It is entirely possible that Hook was hanging around Janet Doe and no one paid any attention despite the father’s request that Hook should not be around his daughter in church.  I believe that the numbers are so great and so many underage kids are coming and going. The church has two campuses and 5 services. Click on the ministry section of the website and see the large number of offerings. So many people…

If other women or couples would like to tell me about their encounters with Pastor Eric Brand, please contact me.

I adhere to strict confidentiality. I believe that there are others who have had some run-ins with Brand. This sort of behavior indicates a form of paraphilia which is next to impossible to overcome without long-term professional counseling. In other words, even in the best of circumstances, it is a struggle. If the information in the lawsuit is proven true, Brand might be a predator. If he was at the church for decades, it is possible that there are many. many recipients of his *ministry.*  I also worry about his wife.

For years, predators have been able to get away with this behavior. Times have changed. If you are a victim, let me know how I can help, even if you just want to talk.

I have one more bone to pick with BBC and that is the fact that some church members went to the trial to plead for leniency for Hook. This is despicable and it most certainly is not a Scriptural response. I will try to write about this next week.

Bellevue’s answer to the lawsuit.

21. For response to the first sentence of ¶ 21 of the Complaint, Defendant admits, upon information and belief, that Jane Doe and James Hook had an extramarital affair in 2011. For response to the second sentence of ¶ 21 of the Complaint, Defendant is without sufficientknowledge or information to form a belief as to the truth of the averment that James Hook suggested that the couples be counseled by Bellevue Pastor Eric Brand. Defendant further moves that the offensive, scurrilous, irrelevant, immaterial and inadmissible averments contained in the second sentence of ¶ 21 be stricken from the Complaint because the sole purpose of these averments is to unfairly prejudice and defame Bellevue Baptist Church.

23. Defendant is without sufficient knowledge or information to form a belief as to the truth of the averments of ¶ 23 of the Complaint. Defendant further moves that the offensive, scurrilous, irrelevant, immaterial and inadmissible averments contained in ¶ 23 be stricken from the Complaint because the sole purpose of these averments is to unfairly prejudice and defame Bellevue Baptist Church.