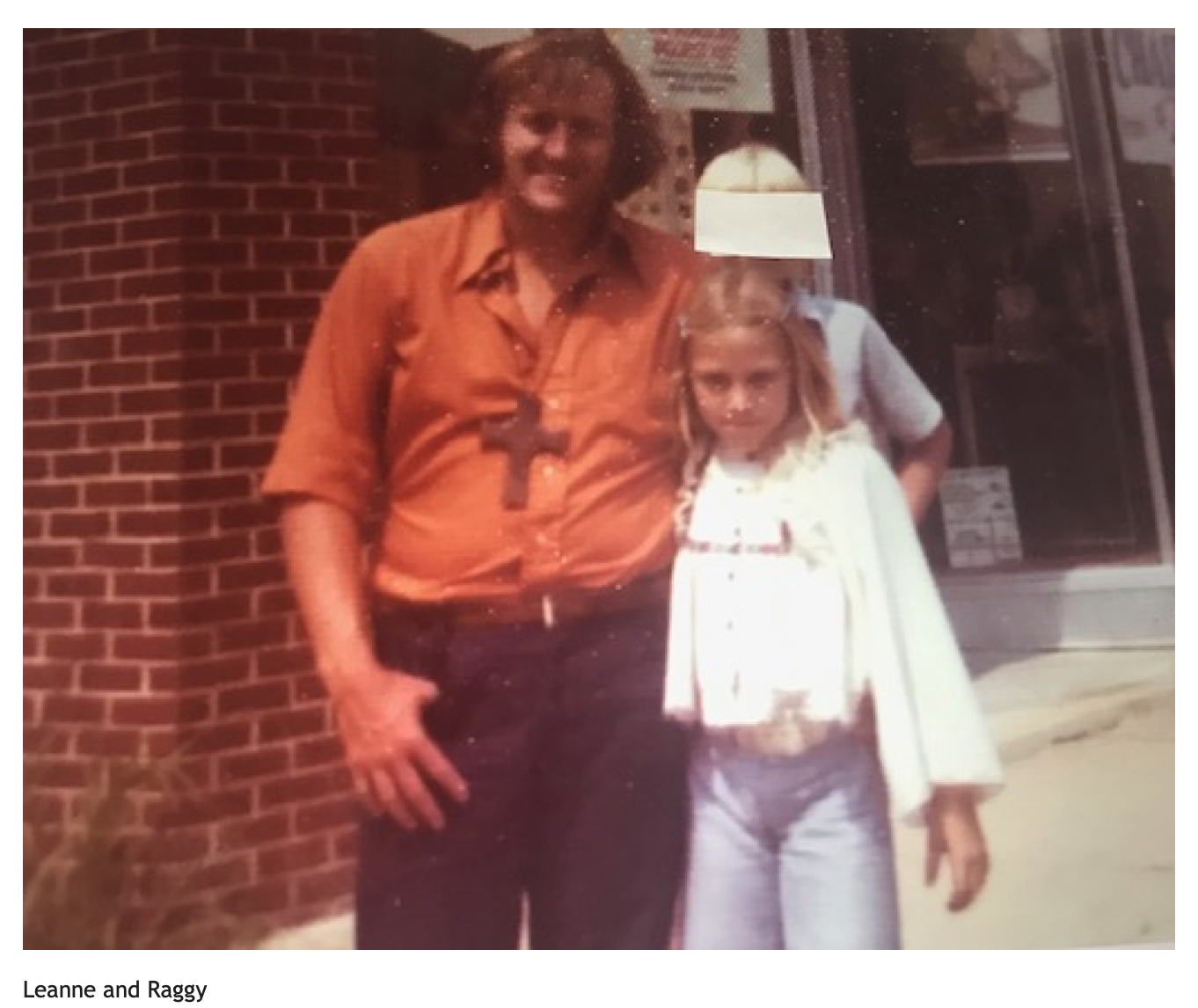 “Because I knew how hard I worked, I knew the pain, I knew the sacrifice, I knew the tears, I knew everything. Despite everything, I stuck to it. I toughed it out, and I kept my head in the game, even when the odds were against me.” Shelly-Ann Fraser-Pryce

Note: This post is graphic in a few places. It is necessary to understand the seriousness of what occurred  in Leanne’s life. Also, at the request of Leanne, I am using Dural Ragsdale’s preferred moniker *Uncle Raggy.* It kind of gives you an idea of what we are dealing with here.

This is one of the most important stories I’ve ever written. Why? Leanne is the face of all victims who have bucked the system for years to bring their abusers to justice.

When LeAnne was 10 years old, in 1974-1975,  Dural R. “Raggy” Ragsdale became the youth minister at Iuka United Methodist Church in Iuka, Mississippi. For a period of time, he lived in LeAnne’s home and proceeded to allegedly molest her between 15-20 times.

After that time, he continued to serve as a Methodist minister in Mississippi for 30 years. He also was the Director of the Wesley Foundation at Mississippi State University. Then, a few years ago, he was forced to leave his position at Porter’s Chapel UMC when he was unwilling to give up his YouTube channel where he is known as *Uncle Raggy.*  At the end of this post, I’m going to ask your opinion on this YouTube channel by having you watch two episodes.

Apparently, the Statute of Limitations in Mississippi does not apply in this instance and more will be forthcoming in another post.

The Telephone Call: Must Hear
On 12/6/2002 LeAnne got up the courage to confront her alleged molester by telephone. (This is about 27 years later.) She was able to legally record the conversation since Mississippi is a one party consent state.

This is a remarkable phone call. LeAnne got up the courage to confront Raggy and he actually confesses to what he did to her. LeAnne stays strong in the call, often telling Raggy to stop talking and listen to her.

In my 10 years of blogging, I’ve never encountered such a clear recording between an alleged abuser and his incredibly brave victim.

Please take the time to listen. I promise you will not regret it. I’ve also attached a transcript of the call at the end of the post.

The most incredible part of this post was the recording on Leanne confronting her abuser. If you haven’t heard this recording, please do so. Since the call was made in Mississippi to another Mississippi number, it is mega; since Mississippi is a one party consent state.

The rest of the story.

I had never posted an audio of a private conversation before and was a bit hesitant. However, the conversation is remarkable. Leanne doesn’t let Raggy get away with anything.

Why don’t the You Tube links to Uncle Raggy’s *ukulele lessons* work?

Raggy had a rather odd You Tube Channel. Leanne has copies of everything that was removed, presumable by Raggy himself. Some of us found the videos disturbing and wondered if these were really about ukulele lessons or something more…My guess is that *something more* is the answer. Otherwise, why would a man rush home after his supposed suicide attempt and delete them.

Shortly after this was posted, we found out that Raggy had allegedly attempted suicide via a car in a garage and carbon monoxide.  He landed in an ICU.  Needless to say, this action was a bit disconcerting me. However, a short time later, Raggy was released. He was well enough to begin deleting all of the You Tube videos. Leanne was way too smart for this Methodist pastor/ukulele player and made sure she had downloaded evidence of all of them.

During this entire time, Leanne, with the help of Mark Belenchia of SNAP, continued to push the DA and AG in Mississippi to go after this guy since the SOL in Mississippi allowed them to do so. Apparently, the posting of the audio was helpful in this regard since it meant the story was getting out there.

Raggy told the Clarion Ledger that, in fact, when Leanne was 10 years old, she molested him!!

I posted Unbelievable Update: Leanne Kay’s Molester, Uncle Raggy, Appears to Tell the Clarion Ledger That Leanne Molested Him When She Was 10 Years Old.

According to Sarah Fowler of the Ledger:

“I can’t prove I didn’t, but I didn’t,” he said. “There’s no Bill Clinton dress that I did but, god, what a horrible thing to have to say or reference.”
Then, he threw a grenade, claiming that Leanne actually did it to him because she was a *curious* child.

(He said), “it only happened once,” before offering an initial description of the events.

Dealing with the authorities in Mississippi

Leanne and Mark were like bulldogs. Leanne had collected reams of information about Raggy and pursued the authorities until, after months and months of contacts, by phone, emails and showing up in their offices, the authorities decided to bring this to the grand jury.

The grand jury voted to have Raggy arrested in order to stand trial for the molestation of leanne when she was. 10 years old. Leanne’s years of seeking to bring this man to justice has succeeded.

Leanne’s remarkable achievement is getting recognized by  media. 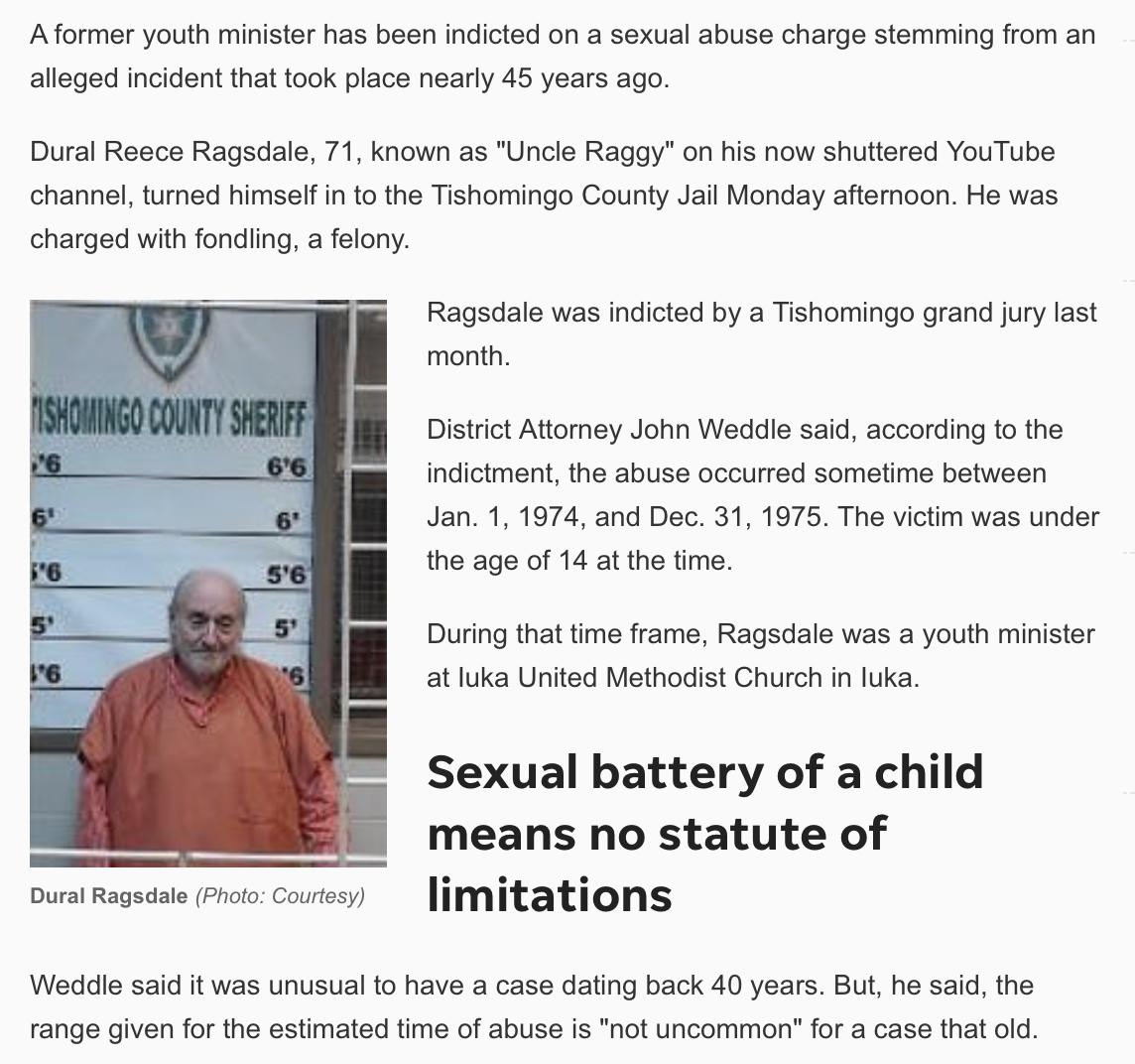 Accuser LeAnne Kay, who testified before the grand jury, told the newspaper she feels “empowered” by the arrest.

“There are so many times I felt like there were too many hurdles to get there, at each juncture when I felt like I couldn’t, I had to give up, God would just open a door and send me a reassurance that I needed to keep going, that it’s too important,” she told the Clarion

Ragsdale, of Clarion in Mississippi, was charged with felony fondling on Monday, but offered an astonishing excuse for his behavior when confronted by a newspaper back in April. Recalling the incident, Ragsdale, who shot to popularity sharing videos of himself playing the ukulele, said: ‘I woke up with the feeling of warm breath in my very private area because that will wake you up and, when I woke up, I realized that she had her head down there and there did not appear to be anything happening but I could feel the breath. ‘So I reached down and got both of her shoulders and I lifted her to eye level and I said, “LeAnne, you know, that can’t be done.

District Attorney John Weddle says in the indictment that the abuse happened sometime between 1974 and 1975, when Ragsdale was a youth minister at Iuka United Methodist Church.

Ragsdale previously denied to the paper that he abused the girl, while describing sexual contact he said happened “one time” because of a “curious” child. He named her, and the paper said key details of their stories matched up. The woman, now in her 50s and living in West Virginia, said she tried to press charges for years.

Leanne’s story is a message of hope to childhood victims of abuse in Mississippi and helps advocates to see why their support is so needed. Hat’s off to Mark Belenchia of SNAP.

Victims from around the state are contacting Leanne. Her remarkable story helps others to see how it can be done. Her persistence is the key to this story. Mark, Leanne and I have been texting back and forth over the many months since she contacted me.

I want to take a minute to give a special shout out to Mark Belenchia of SNAP who has been with Leanne every step of the way. Her fight became his fight and his dogged determination was a kept factor in keeping this ball rolling.

Where was the Methodist Church in all of this?

I’m going to make this a subject of another post. I can truthfully say that the hierarchy has been less than forthcoming. Raggy had to step down from his position prior to this story coming out. He was allegedly told to either give up his You Tube *ukulele* lessons or hi position as pastor. he chose the latter.

When I first posted this story, I attempted. to contact some of the folks in the hierarchy with dismal results. But, more on that in the coming post.

I am so glad that I posted the audio of that phone call. Wade Burleson contacted me and said it was noteworthy. I have to agree. I have yet to hear any other audio in which a victim confronts her abuser decades later, one on one, and records it. Leanne is a rare individual. She persevered when she kept getting stonewalled by the authorities and I thank God for her. She has been a role model to me in how to keep on going when it gets hard. 45 years later, she won! That is pretty darn incredible.

I believe it was  Kyle Howard who said to her abuser, Larry Nasser, “You forgot that little girls grow up.”  Uncle Raggy picked one little girl who grew up and pursued justice for 45 years! I am in awe! 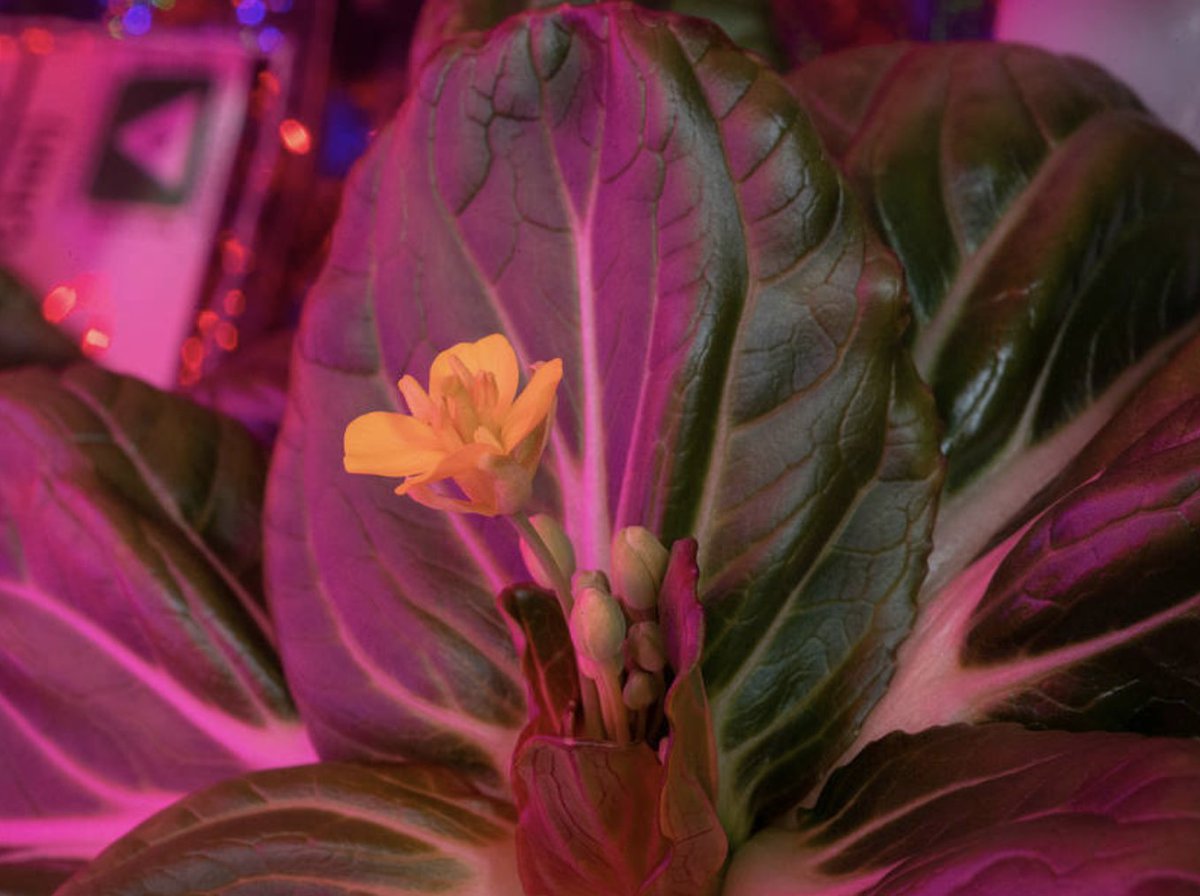