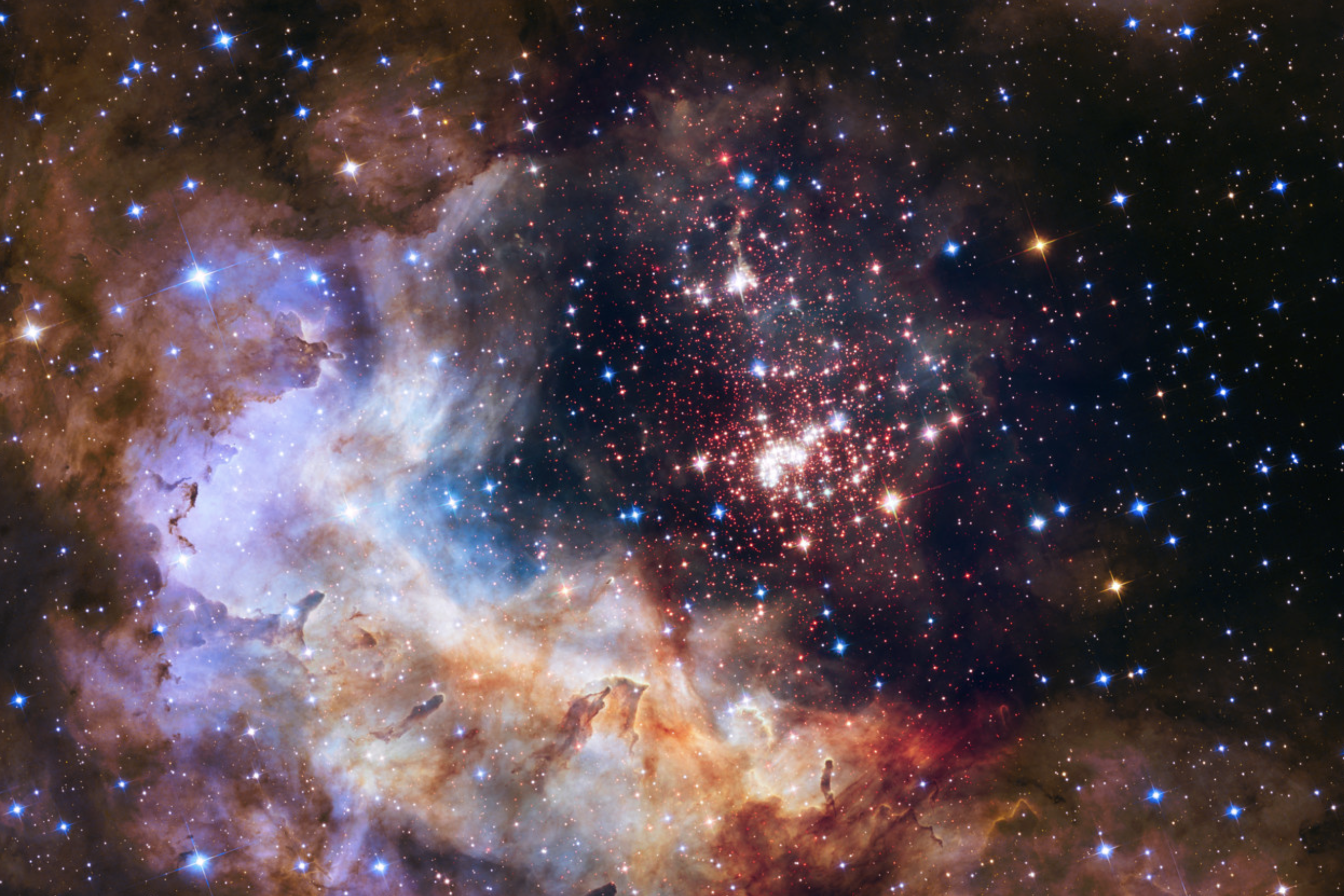 I returned home very late two nights ago. I had an incredible time seeing places that I’ve read about I. Paul’s letters to the church. Once I get organized, I will start sharing pictures and thoughts. I grew up in Salem, Massachusetts and used to think it was wonderful that we had protected such historical landmarks as The House of the Seven Gables and the Witch House (where trials occurred.) However, on this trip, I encountered places that had thousands of years of history. It’s pretty amazing.

It appears it was also a busy time for news.

A truly amazing story is going to posted on Friday. The audio of a woman confronting her abuser was released on this blog a number of months ago. The outcome of this story is starting to be covered in national media.

Anna Keith does it again.

Anna texted me while I was in Greece telling my about a private meeting *just fo some members* that was about to take place at The Village Church, Fort Worth. She had obtained a private phone number to dial to listen in to the meeting. However, the word go out and the phone plan was ditched and only parents of kids at TVC’s Fort Worth Campus were invited to participate. She and I came to the conclusion that we had another abuse situation on our hands. I texted back “I’m sure it isn’t a meeting for Mrs Chandler to share her latest brownie recipe.”

Anna wrote YOUTH VOLUNTEER AT THE VILLAGE CHURCH CONFESSES TO SEXUAL ABUSE OF MINORS I asked permission to quote her post while adding some of my own observations.

She received this text from a person who attended the meeting. 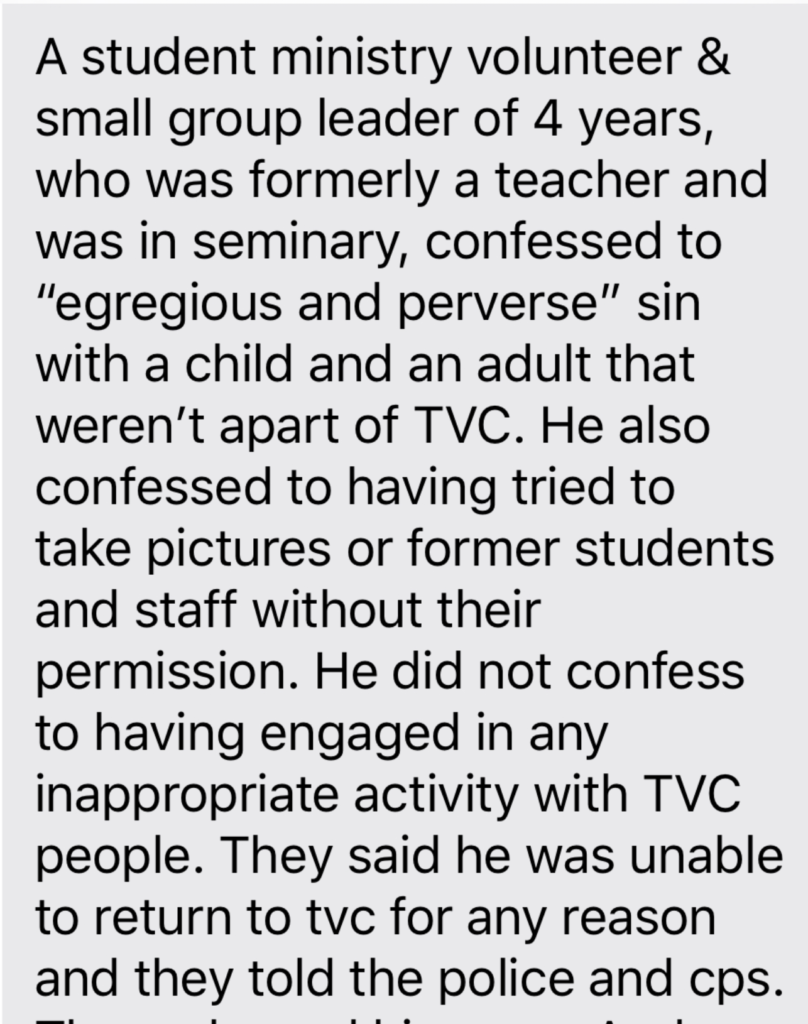 Andy Landrum is/was a volunteer in the youth ministry at TVC Fort Worth campus youth department for approximately 4 years. My source has informed me that her two children were directly involved in activities where Andy was a volunteer leader, particularly on Wednesday nights.  He also led a small group of junior high boys (approx ages 12-13), along with TVC staff member Neal Batman, who is the Student’s Minister at the Fort Worth Campus.

My source tells me that a concerning issue came up during a youth retreat in 2016. At this weekend retreat/sleepover at Landrum’s home, he spoke openly to the boys about his struggle with pornography and offered to be available to them if they wanted to talk to him, if they were experiencing the same struggles. What is interesting to note is that Landrum & Neal Batman were ROOMMATES, which is a living situation that is encouraged for singles at TVC. Also, the youth were told to turn off turn off their cellphones for the entire weekend, which my source’s sons found very odd.

Let’s spell this out.

So, how did TVC respond?

They said that no child attending TVC was a victim. Now, how in the world do they know this? Is Matt Chandler that naive? Do they actually think that this molester had just two victims?…..No wait. What about all the pictures he took *without permission.* This is stupid talk for video voyeurism which is also a crime.

Here is where it gets interesting. According to Anna, only some people were informed of this matter.

It must also be noted that there are many youth events that are combined amongst the campuses, where Landrum could have had access to many kids from all TVC campuses. This meeting only took place at the Fort Worth campus and only the parents of the youth involved at activities at the FW campus were invited to the meeting.

Were there any more red flags?

Yes. Anna found a blog post written by Landrum in the same time period of this retreat.  In this post, Andy is so frustrated with his *problem* that he was planning on cutting out all media and certain food (I’m sure clean meat was excluded. Wouldn’t want to get Chandler upset) for the coming year. 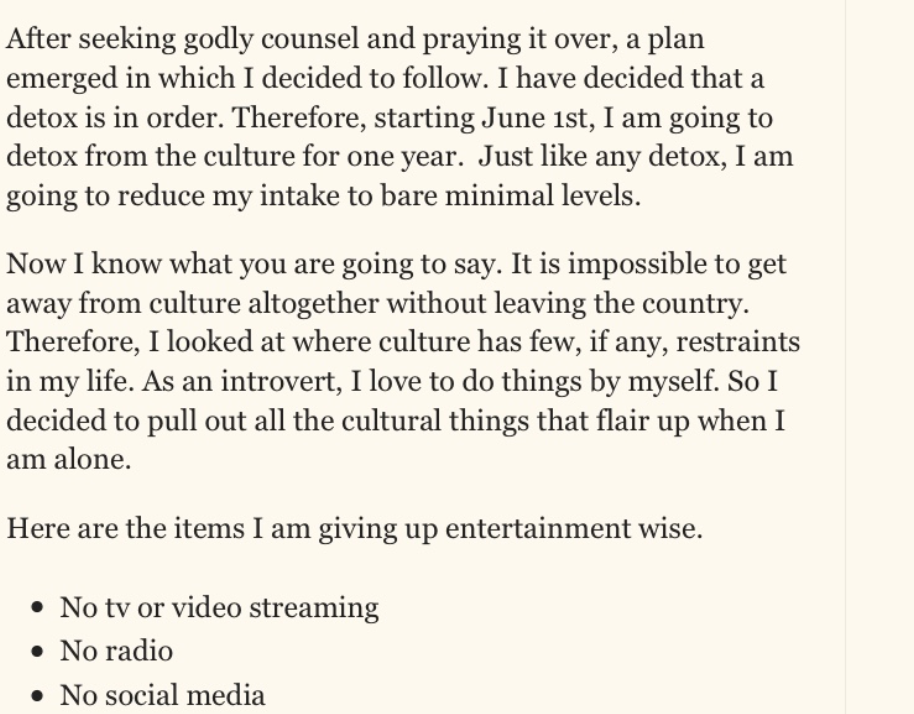 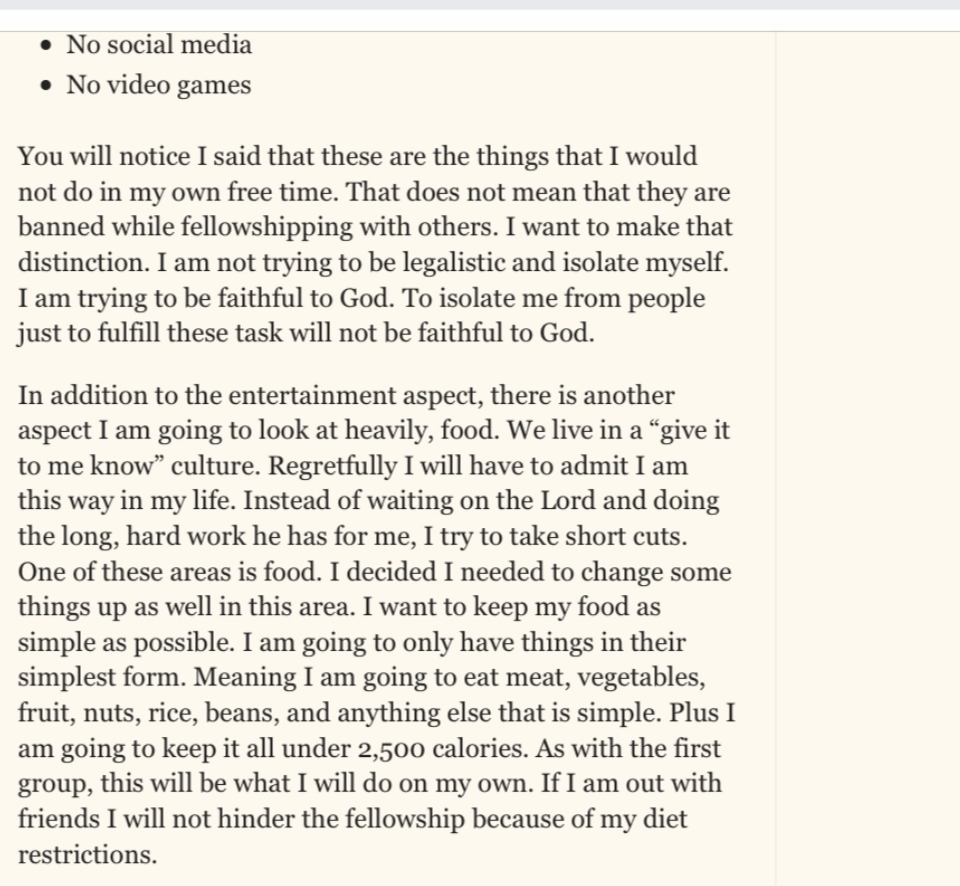 Once again, how did those around him respond?

This sort of response is over the top. He was sending signals that things were very wrong. Red flags were being waved vigorously. Did anyone at TVC start asking questions? What about the church leaders? Don’t they supervise the staff? What about his roommate? Did anyone note his social media presence?

Are leaders in this church so self absorbed  that they didn’t notice this obvious cry for help? Doesn’t TVC have some sort of fancy biblical counseling department? Where were they in all of this?

So, was he present at the meeting with *some* of the parents? Instead, it looks like he was at a football game. 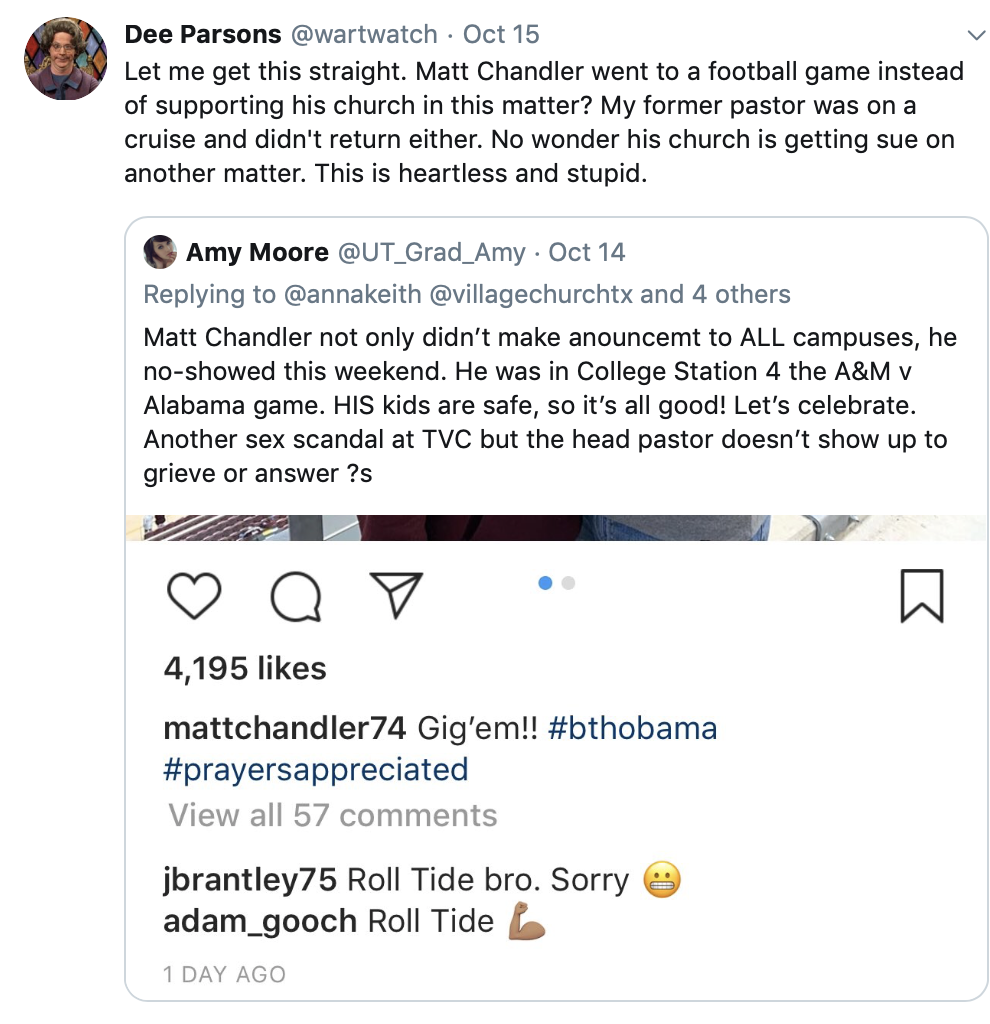 This, unfortunately, appears to be Chandler’s way of dealing with bad situations. His church is getting sued for another situation in which a child was molested at a summer camp and he had no time to give the family a call. Maybe he was just too busy with the clean meat enterprise? Is it true that he’s getting some good deals by being the exclusive provider of steaks to certain fine dining establishments?

I have begun to wonder why this church and Chandler is having problem after problem.

An immediate update: TVC statement amended to now say an individual from TVC was harmed!!!

So, I’m getting ready to hit the *post* button and saw these tweets by Anna Keith. Lo and behold, there is a victim at TVC who is called an *individual.* Child? Adult? Or was everyone at the football game and didn’t have time to check? 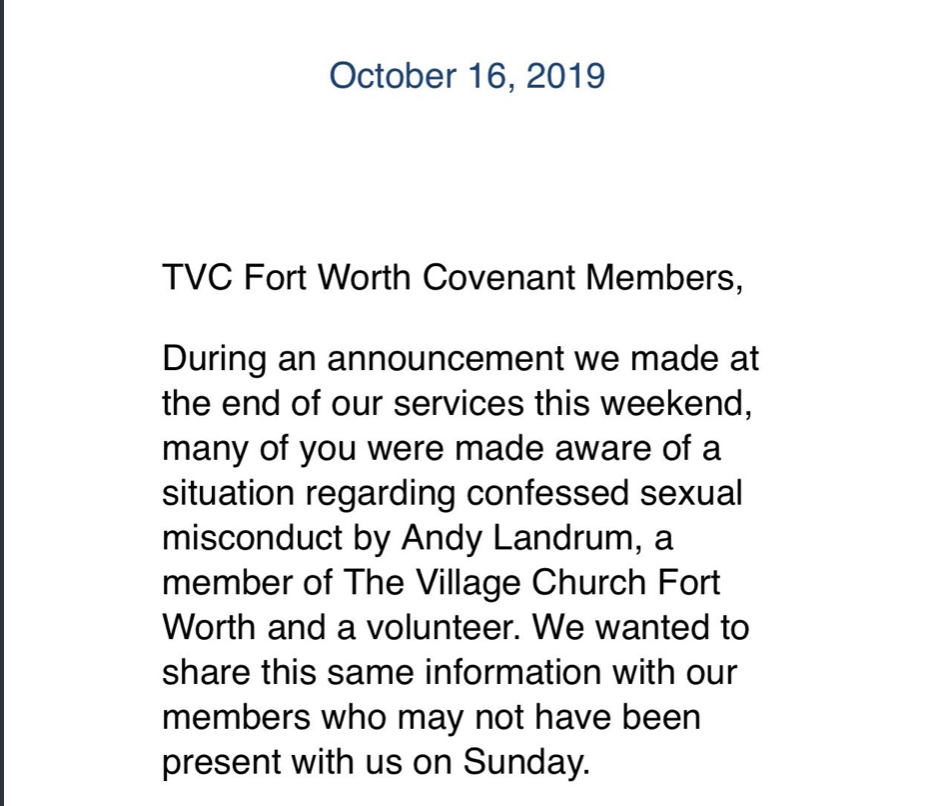 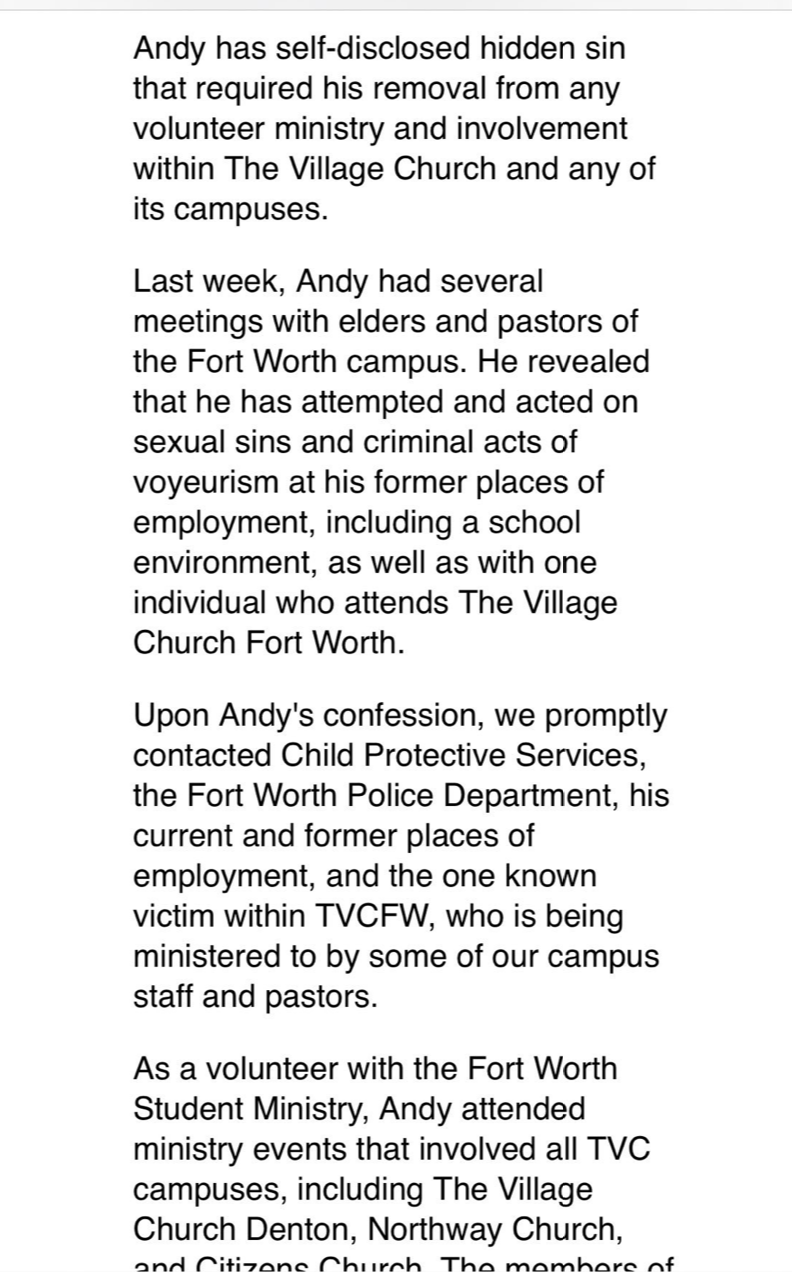 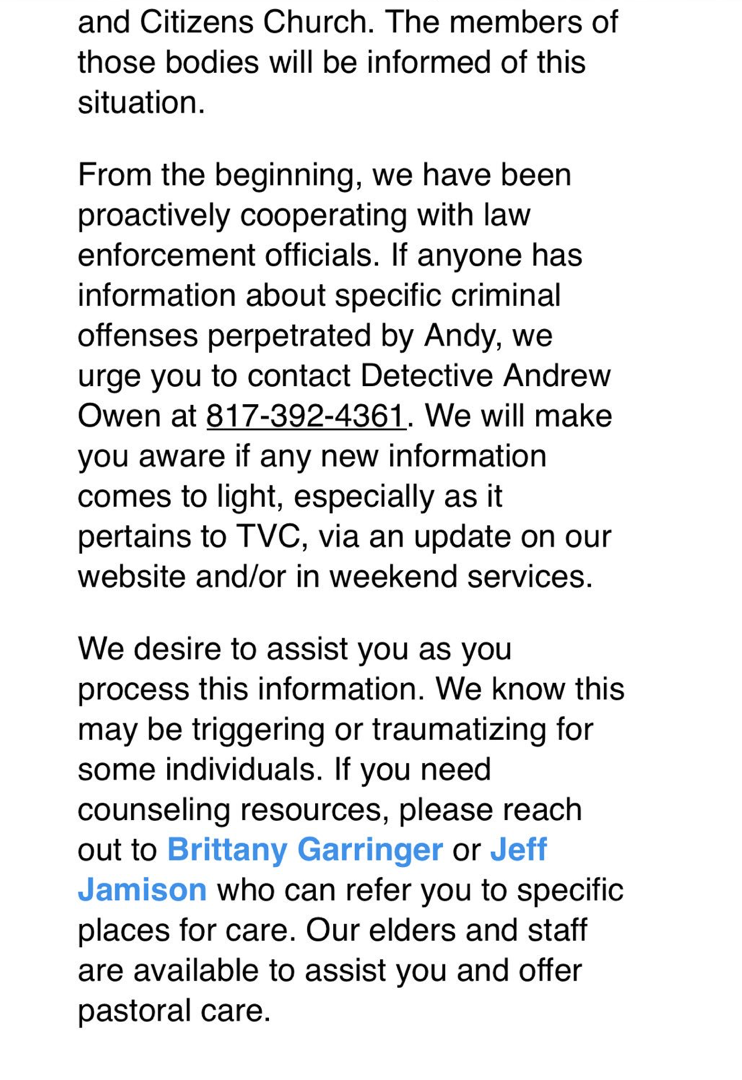 I would not leave any children in TVC’s programs unless a competent family member is present to keep them safe. Something doesn’t smell right here.