"This is a unique opportunity to be part of one or two day conferences that Sovereign Grace is hosting, with one hope: That we might advance the gospel of Jesus Christ, in the UK, Ireland, and Europe by strengthening churches for the glory of God." 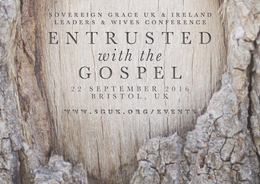 One if by Land Two if by Sea (link)

All joking aside, Sovereign Grace® Churches are hosting TWO conferences in Bristol over the next TWO days, and THREE Americans will be speaking in order to "advance the gospel of Jesus Christ in the UK, Ireland, and Europe by strengthening churches for the glory of God." 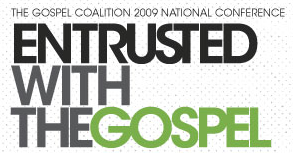 The theme of tomorrow's conference (as shown in the screen shot above) is "Entrusted with the Gospel".  This conference logo was first used by Sovereign Grace Churches at the 2014 Pastors Conference which took place in Nashville, Tennessee.

When The Gospel Coalition (TGC) held its first ever National Conference back in 2009, it was called they very same thing (see screen shot at the left).  Dee and I remember it well because we launched our blog right around the time this conference was announced. We haven't forgotten the names of three of the conference speakers who were all TGC Council Members at the time — Mark Driscoll, C.J. Mahaney, and Joshua Harris. 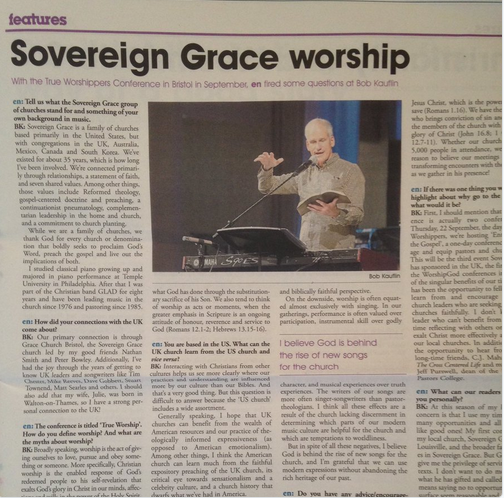 Regarding the ENTRUSTED WITH THE GOSPEL conference, the speakers are C.J. Mahaney, Bob Kauflin, and Jeff Purswell (see screen shot of the conference schedule below). 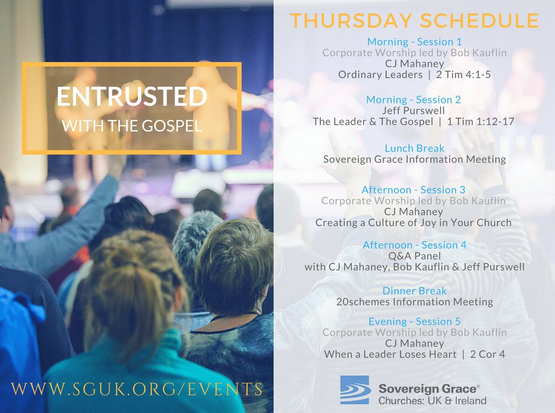 For Mahaniacs who will not be able to attend this event, you are definitely in luck!  C.J. will be repeating several messages he delivered at Together for the Gospel (T4G) conferences.

His morning address (Ordinary Leaders), taken from 2 Timothy 4:1-5, will probably be similar to the message he gave at T4G 2010 called Ordinary Pastors. Mahaney's afternoon session will no doubt be the same one he delivered at T4G 2016 –  Creating a Culture of Joy in Your Church – and his message tomorrow evening, When a Leader Loses Heart, should be much the same as his address at T4G 2012 – When a Pastor Loses Heart – taken from 2 Corinthians Chapter 4.  I guess the Brits who are paying to attend this conference won't mind hearing Mahaney's warmed-over messages.  Folks here in the United States are used to hearing his canned sermons.

Jeff Purswell's morning message (The Leader and the Gospel) will probably be much like the one he gave at the 2014 SGC Pastors Conference, which was called The Gospel and the Pastor. 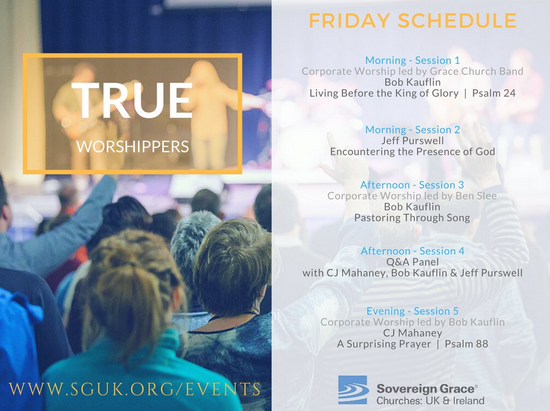 The Friday morning message, Living Before the King of Glory (Psalm 24), was first delivered by Bob Kauflin at his home church, Sovereign Grace Church of Louisville, on October 20, 2013.  You can either watch it or download the audio here.

Kauflin's afternoon session Pastoring Through Song will likely be similar to the one he conducted at the TWIST Pastors Conference that took place in Australia in 2011.  His notes on this topic can be accessed here (at the bottom of the page).

A Surprising Prayer, taken from Psalm 88, was a sermon Mahaney delivered three years ago at Sovereign Grace Church Louisville.

Given all this repetition, can there be any doubt that Bob Kauflin will be leading worship both days with the same songs performed at previous T4G conferences?

One of our astute readers from 'across the pond' informed us that Sovereign Grace's presence in the UK has been limited, perhaps because of similarities to the much larger Newfrontiers network founded by Terry Virgo.  Our British informant explained that C.J. Mahaney began receiving exposure in the UK several decades ago through his friend Terry Virgo.  Back in 2007 Adrian Warnock, another good friend of Virgo's, wrote:

"We have also been shaped by our exposure over several decades to CJ Mahaney."

We researched the Mahaney/Virgo friendship six years ago and shared what we discovered in a post entitled Terry Virgo – Founder of Newfrontiers.  Back in 2005 Mahaney was invited to speak at Together on a Mission, an annual conference founded by Virgo/Newfrontiers and held in Brighton.  This four day event was primarily for Christian leaders (and also students), and it involved Christian teaching and worship.  Other Americans who were subsequently invited to speak at the conference included Wayne Grudem (2006) and Mark Driscoll (2008).  We have theorized that Mahaney and his T4G buddies got the idea of hosting a Together for the Gospel conference, which began in 2006) from the UK's Together on a Mission conference.  According to the Together on a Mission Wiki article, the last conference was held in 2011 (in its present form).

It appears that Sovereign Grace Churches® are attempting to expand their church planting network in the United Kingdom and Ireland through these two conferences.

Registration appears to still be open (as of midnight, September 22nd) for any last minute takers…