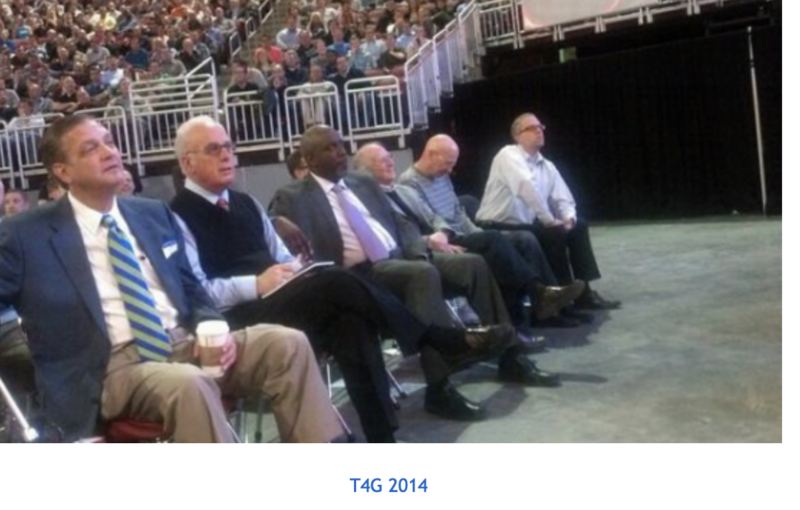 Guess Who? These guys surrounded CJ Mahaney one year after he was not allowed to come to T$G due to some sex abuse coverup allegations. Then, in 2014, they let him back. Ligon Duncan’s brother gleefully posted this picture. I’ll post the names in the comments if you don’t write your answers in the comments. Due to their error when it came to Mahaney (years and years worth,) I no longer trust any of these guys.

“Very small errors in our understanding of the Gospel can result in very big problems.” -C.J. Mahaney

How many of you know what the name T4G, sometimes called Together for the Gospel really means? The number 4 is supposed to recall the 4 best buddies who founded this group. That is CJ Mahaney, Al Mohler, Ligon Duncan, and Mark Dever. In fact, Dever was enamored of Mahaney and I believe he was responsible for introducing him to the others. This conference was founded on the beliefs and practices of these guys.

Hansen, who rose to fame in the Reformed resurgence, wrote his book, Young Restless and Reformed. of course he wrote about the incredible, positive influence of such men like Mark Driscoll, John Piper, Al Mohler, CJ Mahaney, etc. Hansen was adept at describing the resurgence but, in my opinion, he dropped the ball. His tone hasn’t changed much. Despite the internationally spectacular fall of CJ Mahaney and Mark Driscoll,  Hansen still sounded starry-eyed as he describes the last T4G in The Final T4G posted, of course, at The Gospel Coalition which he says is different than T4G.

Many have confused T4G with The Gospel Coalition (TGC), as if they were searching for ballpoint pens and couldn’t tell the difference between Office Depot or OfficeMax. In other words, the confusion is understandable. At one point, Mohler, Mahaney, Dever, and Duncan all served on TGC’s leadership Council.

TGC and T4G are the same despite Hansen’s attempt to make T4G just a pastors conference. In that respect, there is a difference. Women, who cannot be pastors, are barred from the conference by virtue of their gender. Hansen glorified the event as:

However, back in 2012, we questioned whether or not this conference was merely an altruistic event to spread Reformed theology to pastors and bunches of seminary students. We weren’t so sure then and we are certainly not so sure now. We used to call it T$G.

Back in 2004, Chris Hansen of Dateline did an undercover investigation of this AMWAY kingpin who hails from my area. It was appropriately called “In Pursuit of the Almighty Dollar”. Here is the transcript (ed. updated link).  The bottom line of this investigation was that these leaders perched atop their pyramids make most of their money fromconference fees, books, and other sales tools.

As far as I can determine, the conference fees charged for T4G are comparable to those charged by AMWAY kingpins. And it’s obvious that there are a ton of books sold at Together for the Gospel. What happens to all that cash collected from conference fees and book sales? We are talking millions of dollars. Yes, I know that there is a substantial charge for renting the facility, but…

Mahaney explained that mostly pastors attend T4G. By that I’m sure he also meant future pastors, as in seminary students (who attend at a reduced rate). Have you ever thought about who is paying for these pastors to attend T4G? Conference fees, hotel and food costs, as well as transportation? My guess is that the churches are paying all of these expenses. I wonder if church members even know that their pastor is attending this conference.

Here are two tweets commenting on the (sotto voice, with tears held back) final T4G.

Mahaney was pivotal in helping this conference. And the theodudebros, including Hansen, ate it up. Almost googly-eyed he describes the first T4G.

Hansen seems like he can barely mention the abuse factor. He certainly didn’t name Mahaney but neither did Dever or Duncan who continues to be silent on the matter. Mohler finally, was dragged kicking and screaming, to finally disavow Mahaney’s actions.

Not everyone will mourn T4G, no stranger to conflict in the last 15 years. These controversies have forced many pastors to reckon with the church’s response to abuse, to recall one example. Long after the final T4G, we’ll still struggle to discern fact from fiction as we stand on the outside of complex church dynamics, including those involving our friends. Social media will demand we judge these conflicts nevertheless. Hopefully the result will be safer churches that combat abuse in every form.

For those of you who have any doubts about the vast nature of the abuse at Sovereign Grace, of which Mahaney was the Captain, read The Sex-Abuse Scandal That Devastated a Suburban Megachurch

Still, Hansen couldn’t choke it out. Mahaney was integral to T4G and The Gospel Coalition. Aren’t you glad that Hansen had such a wonderful time, standing shoulder to shoulder with the brothers, singing hymns, and giggling at Mahaney’s inevitable and boring athletic jokes? T4G’s big boys heaped scorn on the victims of SGM.  You can read about it here. I believe that they defended their good buddy since he was vital to the *ministry* of T4G.

I have little hope for those who hung on to the very last. Even Al Mohler didn’t show for the grand finale. Of course, CJ wasn’t there. Even though I believe that Dever and Duncan, along with John Piper who was an *important* speaker, still quietly support their old buddy.

Driscoll’s close affiliation with this group is not mentioned by Hansen. In 2016, TWW wrote Together for the Gospel – Who Is REALLY Being Worshipped? Boy, did these boys ever love the brash Driscoll along with the other speakers. Many of them chose to mimic his style and his control with disastrous results. Driscoll went out with a bang yet Hansen will not mention the personality cult that was birthed in that movement. Instead, he discussed that he lost friends.

Hansen has lost dozens of friends who used to be gung ho on the T4G front.

Recently, while browsing through my contact list from nearly 20 years in professional ministry, I had to pause due to discouragement. Dozens and dozens of names—nearly half my list—wouldn’t welcome any message from me. They had disavowed Christianity or at least Reformed theology. Or committed suicide. Or changed their political views. Or were convinced that I’d changed mine. In ministry you’re always losing friends. You don’t always learn why.

If they were your friends, you ought to figure out why. If someone has disavowed Reformed theology, especially the type espoused at T4G, one shouldn’t be surprised. Many of my Reformed friends of the presbyterian persuasion claim that the Reformed theology taught by T4G/TGC is not truly Reformed. Perhaps some of them learned this.

Perhaps others began to see through the celebrity worship and realize that some of the “Reformed” teachings led to harsh discipline which hurt many people as I have documented since I began writing this blog. Perhaps some of them woke up. It is disturbing to me to notice that Hansen puts disavowing Christianity in the same sentence as disavowing Reformed theology. That was always hidden in the background of this conference. This post The troubling trends in America’s ‘Calvinist revival’discussed some of these problems.

One of the markers of the neo-Calvinist movement is isolationism. My Reformed friends consume Calvinist blogs and Calvinist books, attend Calvinist conferences, and join Calvinist churches with Calvinist preachers. They rarely learn from or engage with those outside their tradition. (My feeling is that this trend is less prevalent among leaders than the average followers.)

…An illuminating example of this might be the recent glut of Mark Driscoll controversies—from sexist comments to charges of plagiarism to proof that he bought his way onto the New York Times bestsellers list using ministry monies. Leaders in the movement were effectively mum until a select few broke the silence of late. The first accusations of Driscoll plagiarizing were revealed on November 21st, but the first truly critical response posted by neo-Calvinist mega-blog, The Gospel Coalition, trickles out on December 18th. One might compare this with the response to Rob Bell’s book “Love Wins” that was in full bloom before the YouTube trailer finished buffering.

…This is often seen in the way neo-Calvinists speak as if they are the arbiters of the term “gospel.” Search the term “gospel” on the web site of the Reformed publisher Crossway and you’ll see what I mean. Or listen to the way some neo-Calvinist leaders frame every ethical issue of the day, not as a difference of opinion among Christians of mutual goodwill, but rather an affront to the gospel itself.

“The perspective of many today is that if you aren’t a Calvinist, you don’t really have a grasp of the gospel,” Olson says.

As for the political stuff he discussed, I am going to discuss that along with a fascinating article that came out in the Atlantic.

From left to right, many pastors find more in common with even unbelievers who share their political and cultural assumptions than with believers who affirm the same doctrine. Allegiance to parties and politicians obscures friendships in the fog of suspicion that has overtaken so much of the American church

I do not believe that this crowd welcomes those of us looking in. Some of the nastiest emails that I have received were from those who were celebrity-driven within the movement. The language they used, which appeared to mimic Driscoll, was astonishing. I was told I would be sued when merely describing what I saw and what they said or did. Apparently, honesty is not much valued in the T4G theodudebros.