Then came the police statement: The alleged shooter said he wasn’t fighting a race war when he allegedly committed the killings, at three massage parlors in the Atlanta area; he was battling his own “temptation” and “possibly, a sex addiction.”

Far from eliminating racism as a motive, the alleged shooter’s confession embodies it: The murders in Georgia represent a uniquely American twinning of racism, sexism, and religion.

“It’s not a jump to say white conservative Christianity played a role here,” said Joshua Grubbs, an assistant professor of psychology at Bowling Green State University. “The facts need to come to light, but all the facts that are in the light right now suggest it’s at play.”

Robert Aaron Long, a white man, aged 21, has been charged with murder over the killing of eight people at massage parlors in Atlanta, Georgia. Among the victims were six Asian women, prompting discussion about the intersectionality of Long’s alleged crimes, the ways these horrific acts of terrorism reveal how Asian and other minority women in the United States are vulnerable not only to sexism but also racism and other forms of prejudice.

But there is a further significant contributing factor in Long’s alleged crimes, one that unfortunately can act as a fulcrum of racism and sexism: religion.

In one online social media profile, Long described himself as, “Pizza, guns, drums, music, family, and God. This pretty much sums up my life. It’s a pretty good life” (CNN). Other media reports soon confirmed the relevance of Christianity to Long’s profile, reporting that he is an actively involved member of Crabapple Baptist Church in Milton, Georgia (Vice), a commuter suburb of Atlanta.

“A temptation to eliminate:” Purity culture and other complementarian discourse in white male violence against women” Religious Language, March 18, 2021

Pastor Byung-chul Han of the Korean Central Presbyterian church condemned the shootings as an act of white supremacy and hate. He invoked the racial justice protests in the aftermath of George Floyd’s death, and called on the Korean American community to become more vocal about racial and social justice.

“This is clearly an act of white supremacy against vulnerable Asian women,” he said during his sermon. “America is a country built by immigrants. But there are people who don’t want to accept this,” he said.

You have likely heard the shocking news that on March 16th a lone gunman shot and killed 8 people in 3 different massage parlors in the Atlanta area.

What you may not have heard is that killer Robert Aaron Long was a baptized member of Crabapple First Baptist Church. The church is a member of the Southern Baptist Convention (SBC) and is also listed on the “Church Search” page of the 9Marks website; additionally the church is listed on the Founder’s Ministry website as a “Founders Friendly” church.

I share the opinion of those I have quoted above. While I do believe in personal responsibility – Aaron Long is solely responsible for the 8 individuals he killed – I do think we, as a society, need to examine whether the teachings at the churches killers like Aaron Long and John Earnest (a member of an Orthodox Presbyterian Church who killed one woman and injured three others in a synagogue shooting) attended may have played a role in influencing their thoughts. If you have objections to my suggestion I ask if you had any objections when the FBI investigated the Imams teachings at mosque services attended by terrorists? As far as I am concerned Aaron Long and John Earnest are domestic terrorists. 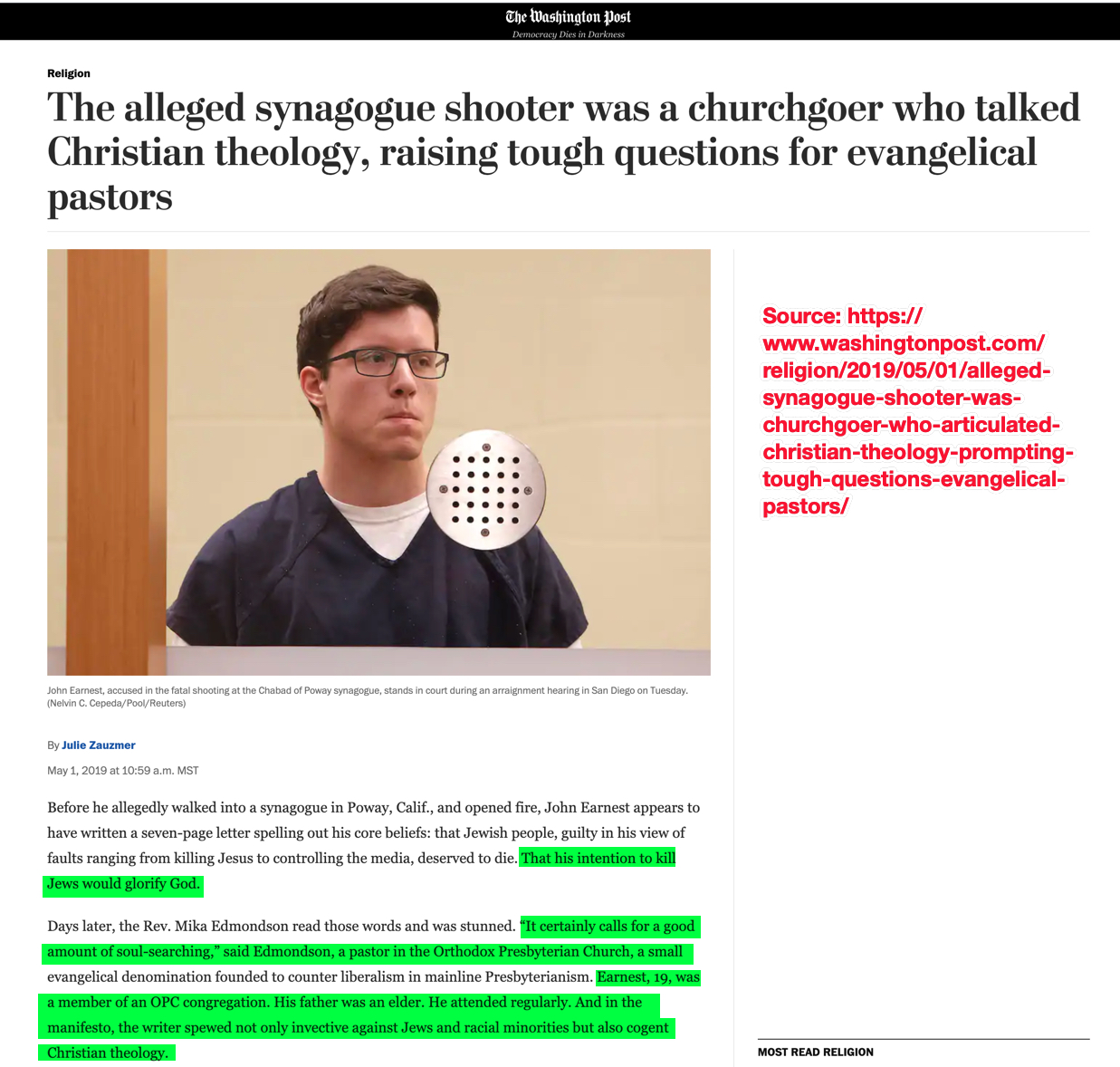 “The FBI approaches the radicalization issue on two levels:

We are attempting to understand the dynamics of individual and organizational radicalization to identify early indicators as to whether individuals or groups are demonstrating the potential for violence.

We are engaged in extensive outreach to Muslim communities to dispel misconceptions that may foster extremism.”  Source document 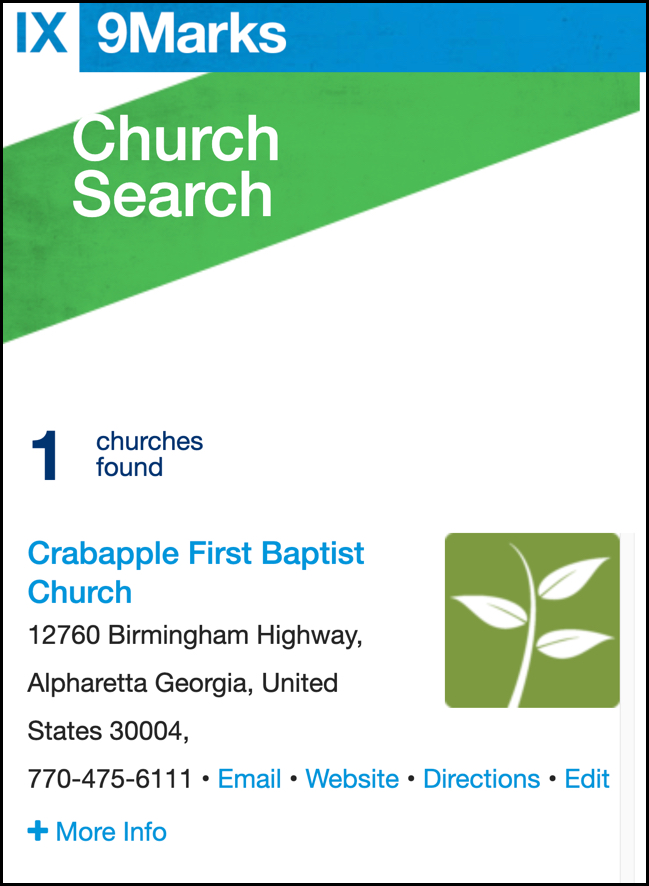 9Marks is a parachurch organization that, in my opinion, has an elitist view of their brand of Christianity. The organization, headed by Mark Dever of Capitol Hill Baptist Church, holds to believers baptism, which is to be expected by a Baptist pastor, but Dever is adamant that his view is the correct view of baptism to the point that he has written an article stating that his friends who believe in paedo-baptism are sinning! 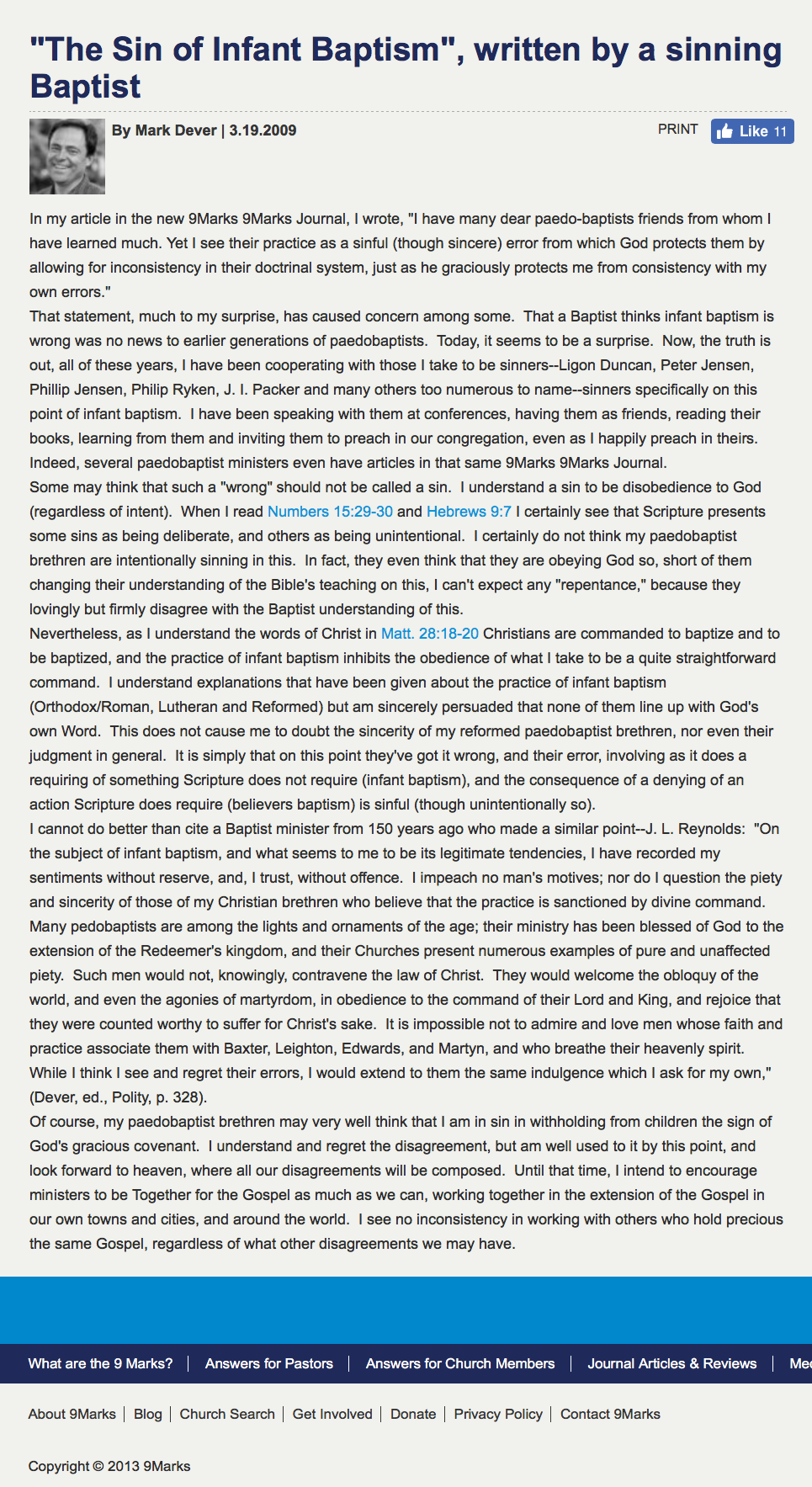 Further, Dever believes that ideally, you should not baptize children or young adults, but should wait until the individual has moved out from his parents and is living on his own, only then you can truly judge whether the professed believer in Christ is truly a Christian. 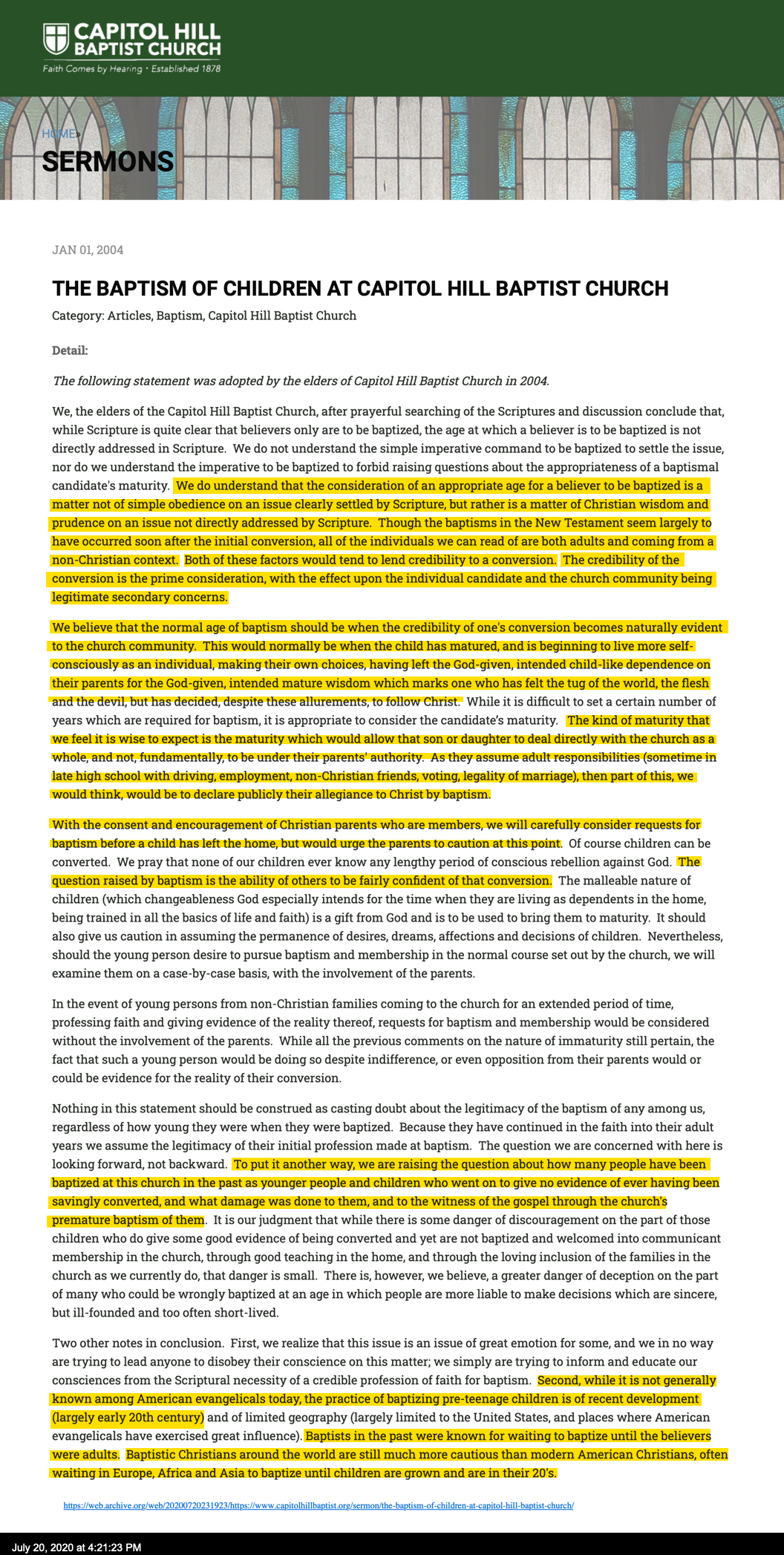 Additionally, 9Marks stresses the importance of formal, covenant membership. In their teaching, they advocate that prior to the church members voting on whether a new member is accepted into their church the prospective member needs to be interviewed by the elders to determine, again, that the individual is truly a Christian.

“Topics covered in our membership interviews include (1) greeting and prayer; (2) basic contact, family, and church history information; (3) personal testimony; (4) gospel definition; (5) personal questions on the soul and commitment to our church; and (6) an overview of expectations and next steps.1 Let’s think about how to interview strategically by discipling and discerning.

Christians disciple others by helping them move toward maturity in Jesus. Even something as mundane as a membership interview can disciple Christians toward Jesus in gospel confidence, gospel gratitude, and gospel community.

At the same time, you must discern whether or not you would recommend the candidate for membership. In order to do this, you need to know if a person’s profession of faith in Jesus is credible. Credibility does not look for absolute certainty but rather observable evidence of continuing repentance from sin and functional faith in Christ.

Now, if you barely know someone, how can you possibly discern the credibility of a profession? Simply put, look for a basic understanding of the gospel and a present willingness to obey all that Christ commands (Matt 28:20). You can discern it by their gospel explanation, their testimony, and their willingness to join a church that practices meaningful membership.”

I believe Aaron Long was examined by elders at Crabapple First Baptist Church prior to his second baptism at the age of 18 (he was initially baptized at the age of 8) and examined again prior to becoming a member of the church. I am certain Mark Dever, although hopeful that no false believers will make it through the rigorous 9Marks interview process, will be the first to admit that some will. In the case of Aaron Long, the 9Marks practices failed miserably. Sunday, church members admitted as much, excommunicating Aaron Long.

Clearly, Aaron Long was a troubled soul. The article below states that he, at least once, contemplated suicide. The article also states that “In both 2019 and 2020, Long had spent time at HopeQuest, an evangelical treatment facility in nearby Acworth specializing in sex addiction and pornography addiction, as well as “gay conversion therapy.” That facility is less than a mile from Young’s Asian Spa — the site of Long’s first attack on Tuesday evening.”

Surely church pastors had some idea of the struggles Aaron Long was going through, but in an earlier statement they said “he alone is responsible for his evil actions and desires,” which are “the result of a sinful heart and depraved mind for which Aaron is completely responsible.”

Of course, Crabapple First Baptist pastors will claim they are not their brother’s keeper –  Aaron is completely responsible – there are, after all, potential lawsuits to worry about; but my guess is that should a civil suit be filed, a jury will find they are partly culpable in this tragic story.

In light of this tragedy, I believe churches must do some serious self-examination. Perhaps Crabapple First Baptist Church’s cold, correct doctrine could use an infusion of the love of Christ. But, having been a member of a church that subscribed to 9Marks doctrines, I wouldn’t hold my breath waiting for change. Instead, what we are already seeing are attacks against the messenger. (Caution, you may find this Tweet offensive: https://twitter.com/JJ_Denhollander/status/1372595727025774594?s=20 ) 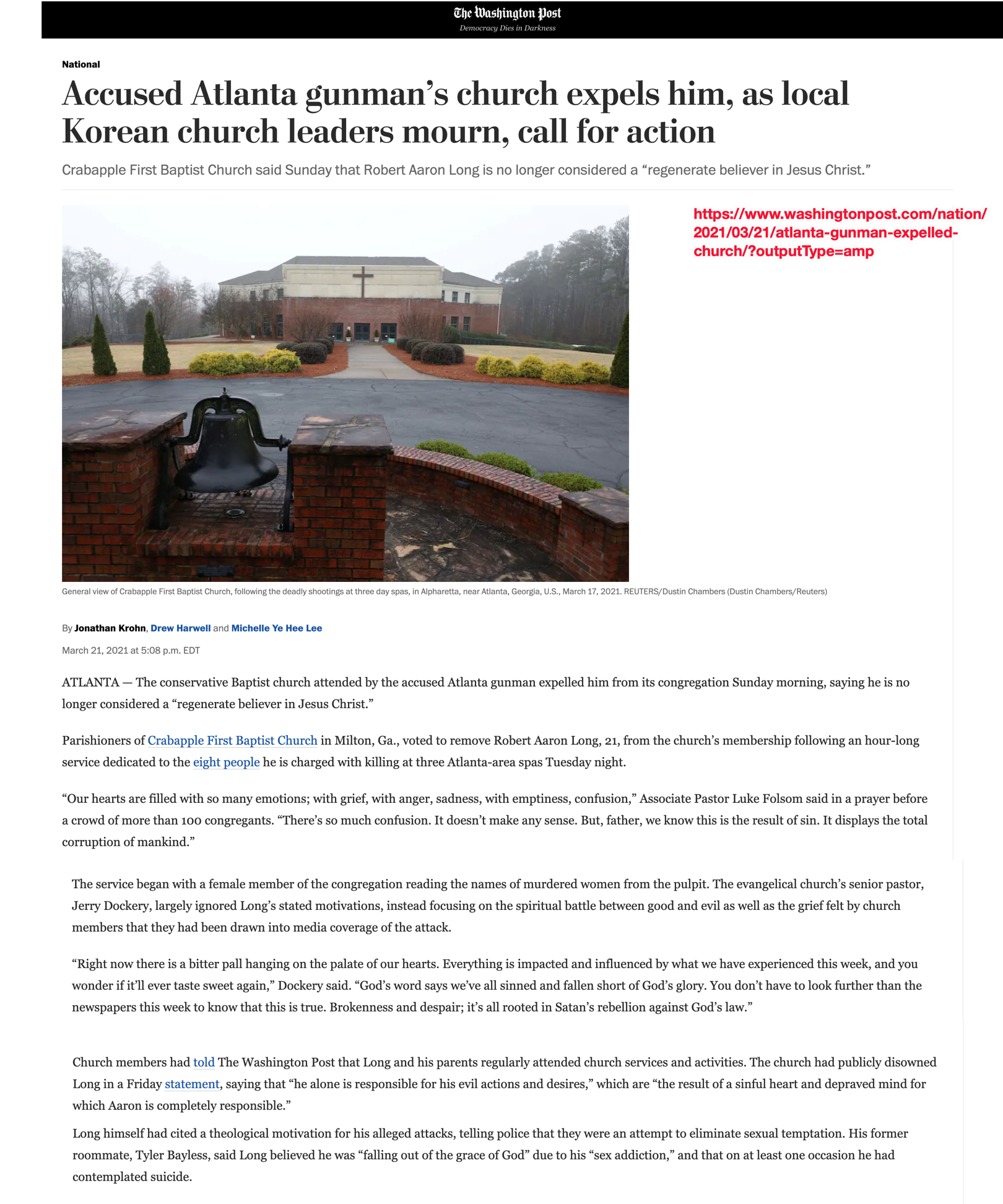