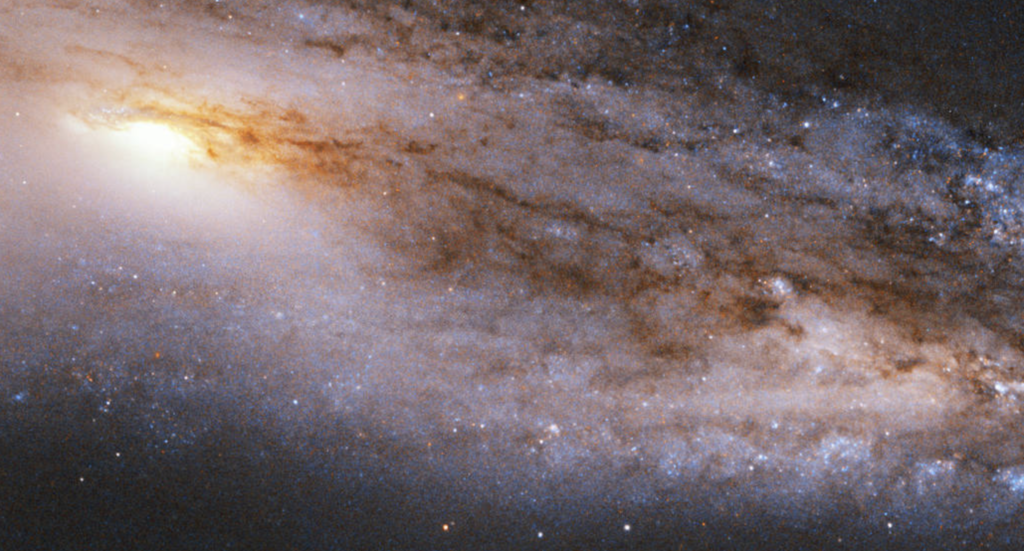 Hubble Catches a Bounty of Stars and Cosmic Dust: NASA

This Hubble Space Telescope image shows the spiral galaxy Messier 98, which is located about 45 million light-years away in the constellation of Coma Berenices (Berenice’s Hair). Messier 98 is estimated to contain about a trillion stars, and is full of cosmic dust — visible here as a web of red-brown stretching across the frame — and hydrogen gas. This abundance of star-forming material means that Messier 98 is producing stellar newborns at a high rate; the galaxy shows the characteristic signs of stars springing to life throughout its bright center and whirling arms.

“It is not your business to succeed, but to do right; when you have done so, the rest lies with God.” – C.S Lewis

A weird apology from the Founders regarding their ill-regarded trailer.

William Thornton at SBC Voices wrote Finally, a formal statement about the Founder’s debacle. It was written by Tom Ascol: About that Trailer. Ascol admitted that Danny Akin and Al Mohler were none too happy with the trailer. Read the full statement. Ascol appears to be saying that some people in the. trailer were pressured to withdraw their support. They do not elaborate. Maybe it’s another one of those conspiracies….

Some other men have also asked that their interviews not be used, including Mark Dever and Jonathan Leeman. Others have been pressured to withdraw. We will, of course, honor these requests.

Some have accused us of misrepresenting the words spoken by certain people who appear in the trailer. We do not believe we misrepresented anyone’s words.

…Some expressed concerns about a 1-2 second clip of Rachael Denhollander, accusing us of presenting her as demonic. Certainly, no one at Founders Ministries believes that and we did not foresee people taking it that way.

They express regret for unwise alignment of image and idea. (This is not a joke.)

Some expressed concerns about a 1-2 second clip of Rachael Denhollander, accusing us of presenting her as demonic. Certainly, no one at Founders Ministries believes that and we did not foresee people taking it that way. That was not our intention and, admittedly, not our wisest editing moment. We regret the pain and confusion we caused by this unwise alignment of image and idea.

They deny stirring up division.

It is obvious that faithful brothers and sisters can and do disagree on the issues involved. Some who agree on the issues disagree on the strategies for addressing them. I have friends in both categories who disagree with me. But I must respectfully disagree with those who say we are “stirring up division” by addressing these issues. Southern Baptists are already discussing these issues, and have been for some time. We do them a great disservice by pretending they are not, or that they do not deserve this discussion.

And, of course, they are going ahead full throttle because they are submitting to God.

Finally, my hope and prayer are that this film will bring desperately needed attention to teachings and practices that need to be reevaluated in the light of God’s Word. He has spoken. We live under the authority of His Word. It is imperative that we take Him at His Word and trust Him to guide us in His ways as we joyfully and confidently submit ourselves to it.

William Thornton put it this way.

Here’s a word not in the statement: “apologize”

Here’s another word not in the statement: “sorry”

Here’s  a word, used once, in the statement: “regret”

We regret the pain and confusion we caused by this unwise alignment of image and idea.
Not exactly a profile in courage or confession to speak of an “unwise alignment.” It was scurrilous. Glad he took responsibility for it.

Although Founders claims they are letting people remove their participation in the film, it appears that they are not doing so. 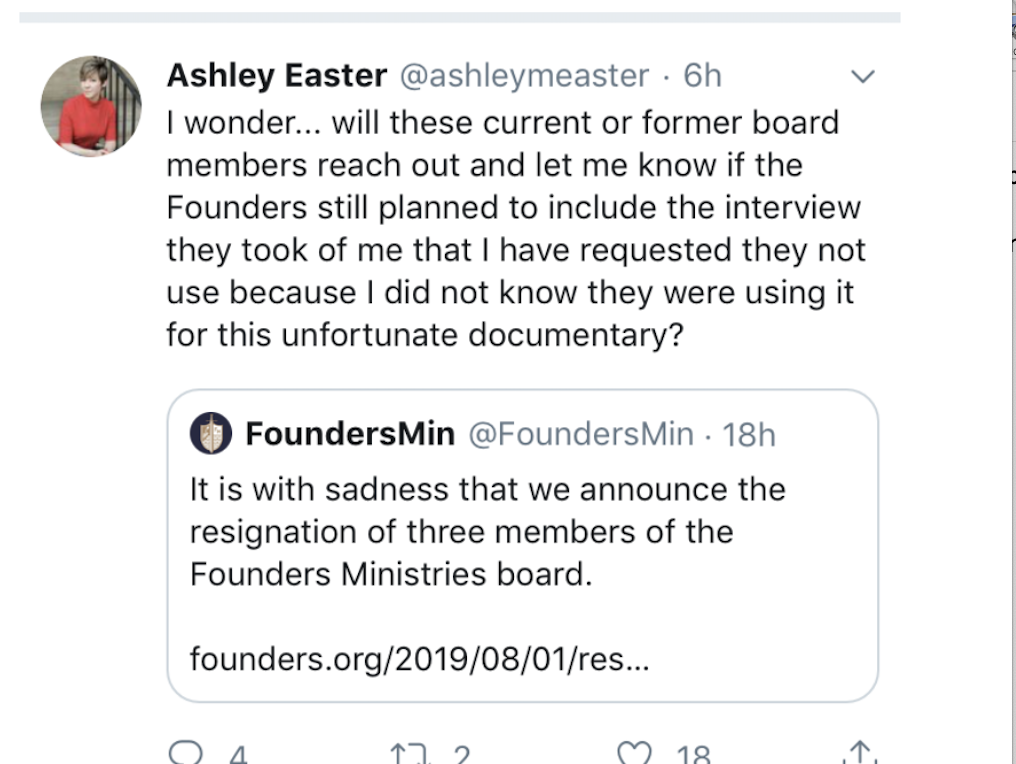 In the meantime, 3 people resigned from the Founders Board.

Here is a statement from the Founders website. Resignations from Founders Ministries’ Board

It appears that some of their board members believe that the Founders sinned. Of course, the Founders claims they didn’t do anything wrong.

It is with sadness that we announce the resignation of three members of the Founders Ministries board. Drs. Fred Malone, Tom Hicks and Jon English Lee have resigned this week after lengthy conversations about the release of and responses to a trailer for the planned documentary, By What Standard?

Our conversations led to an impasse regarding the nature of sin, unintentional sin, unwise acts and what faithfulness to Christ requires in the wake of each. Though each of these three men formulated his own arguments, their views led them all to conclude they could not conscientiously continue to serve Founders without agreement on these points as it relates to elements in the trailer. As the statements of Fred Malone and Tom Hicks below indicate, they believe we have sinned in how the trailer portrayed certain people and issues. Tom Nettles, Jared Longshore and I do not believe that. This is the fundamental point of the impasse that we reached.

Here is an excerpt from Tom Hicks’ resignation.

However, after the release of the recent trailer, I came to a strong convictional impasse with others on the Founders Board. We disagreed in love. We all tried to accommodate each other’s consciences as much as possible. We labored to work through our differences, but our respective differences remained. I was particularly concerned about the inclusion of Rachael Denhollander in the trailer, whom I did not see when I first watched it. Her presence in the trailer, along with other sexual abuse survivors, seemed to conflate sexual abuse with other problematic views of social justice. Jacob and Rachael communicated to me that her primary concern was not her portrayal as much as the portrayal of sexual abuse survivors and the conflation of sexual abuse with other issues. All the board members agreed that sexual abuse is very different from social justice issues, but we disagreed about how to go forward in light of the trailer.

Then there is the curious case of Fred Malone’s resignation and his *conscience.

However, the recent trailer about the upcoming video on “By What Standard” has created a growing difficulty of conscience within me which resulted in my resignation from the Board. Although I originally approved the trailer as a Board member, I did not exert my due diligence beforehand to closely examine it and to speak clearly about the “tone” of it. That is my failure as a Board Member. So, after I came to the knowledge of a confusing image which was Mrs. Rachel Denhollander (now removed from the trailer by Board agreement), I came to the conviction that I had sinned unintentionally in my approval and that the trailer itself committed a sin unintentionally of false witness against Mrs. Denhollander based upon the 6th and 9th commandment

Go to the post and read the transcript in which he admits to knowing about Chantry’s problems back in 2000.

Fred Malone of FBC Clinton, La. participated over the phone in the 2000 ARBCA investigation into the savage abuse of children by Tom Chantry. His contact was Don Linblad of ARBCA, both guilty of covering up Chantry’s heinous crimes.

Below is a portion of a conversation between Fred Malone and former FBC Clinton, La. deacon Anthony Battaglia. The call took place on Friday, July 28th 2017 beginning at 7:07 p.m. and lasted for 22 minutes.

Fred Malone currently works at First Baptist Church in Clinton, Louisiana. He served as a trustee for IRBS, on Administrative Council of ARBCA, the Theology Committee of ARBCA, and is now the Senior Fellow for IRBS. He also serves as a founding Board Member of Founder’s Ministries and has served as a Trustee for The Southern Baptist Theological Seminary, Louisville, Kentucky. He is also the Professor of Pastoral Theology at IRBS.

The Founders are running into trouble but Tom Ascol is a man with a strong ego who will carry on to save the SBC from evil people and ideas such as social justice, strongly women in leadership, etc. Yet they have men like Fred Malone who bears some responsibility for the direction of ARBCA which had hoped to save Tom Chantry from himself. Why does it seem so logical to me that The Founders would appoint Fred Malone to their board?

Do not be fooled.Tom Ascol is angling for a leadership position in the SBC. It is becoming more and more apparent he will make a play for SBC president.