Mars Panorama shot at the end of 2019 and just released.

“It is easier to build strong children than to repair broken men.”  — Frederick Douglass, abolitionist and statesman

Before I begin the post, I want to make four points.

What in the world is a MAP and a NOMAP?

Over the weekend, I was made aware of a new advocacy group called MAP which stands for *minor attracted person*. At first, I believed that these were people who had accepted that they were pedophiles, had received and are receiving intensive psychiatric intervention and were doing the hard work of staying away from minors in order not to offend or reoffend. However, a MAP is merely a *minor attracted person.* This descriptor does not address their actions.

NOMAPS are MAPS who claim they do not consume child pornography or molest children. Since I have just learned about this group, I will be sharing information that I have gleaned from a number of articles.

However, it is important. to realize these terms, MAPs and NOMAPsa, may be sometimes used interchangeably so be careful about making assumptions.

The BBC, in 2017, posted The young paedophiles who say they don’t abuse children

The following article is about a man who appears to be a NOMAP, at least for now… However, he self identifies as a MAP.

Adam first realised that there was something different about him when he was 13. His friends suddenly started talking about girls and he just wasn’t interested.

He couldn’t reveal the truth. He didn’t think about girls at all, but about boys who were younger than him.

…he explains that he had always wanted to have a wife and children one day.

But something made him realise this just wasn’t possible.

“I got really worried that I’d end up hurting a child and go to prison. My life would be over.”

There’s a growing body of research into young paedophiles like him, including those who have never been through the legal system.

People like Adam have started to form online forums and chat groups where they discuss their struggle.

Many of them, including Adam, dislike the word “paedophile” because of the way the media uses it interchangeably with “child rapist” or “child abuser”.

Instead, he refers to himself as an “MAP”, which stands for “minor-attracted person”.

…He says he has never abused a child, either online or in person.

This sounds good, right? However, pay attention to this next part.

And yet when he is asked about the precise nature of his attraction, he starts to become uncomfortable.

He squirms, stammers and clams up. He can’t get the words out and the conversation moves on.

He admits to having “crushes” on young boys but he says he works hard to distract himself.

In a message, Adam explains his “age of attraction”.

Sorry for not being able to answer when you asked the ages, it’s something I was dreading you asking … I hope you understand. My aoa is 1-15, but the emotional side is a lot stronger than the physical side with the lower ages.

…”I don’t really think of a toddler in much of a sexual way, but rather, I want to cuddle one and make sure they’re happy. That is mainly it with younger children.”

….Adam wishes he was attracted to adults but he just isn’t.

…I ask if he thought he might end up abusing a child.

He admits: “I thought maybe at some point in my life, maybe I would. Not imminently. But I realised, hey this actually hurts children and I don’t want to be part of this.”

But did he view illegal images of children online?

He says that he hasn’t. Partly because he wasn’t “tech savvy” enough to know how to avoid getting caught.

In other words, Adam is conflicted. He claims he has not harmed minors but he admits that he might do so, one day.

In other words, MAPs has a subcategory: IPHE.

...Pedophiles about Pedophilia, a site dedicated to explaining pedophilia written by pedophiles, hopes to provide insight into the “born this way” culture of adults sexually attracted to the body type of a prepubescent child.

Some of the site’s entries include, “Correcting Propaganda about Minor Attracted People,” “Ideological Spectrum of MAPs,” “Five lies about Pedophiles,” and LGBTQ & Pedophiles.

MAPs have attempted to be accepted of the LGBTQ communities, especially during Gay Pride marches but have found rejection in such groups.

The Daily Beast posted Do You Know What A MAP Is? I Just Found Out And Now I’m Warning Friends by Phaylen Fairchild.

No, it’s something much more horrific than I ever anticipated. MAP is an initialism, self-created by the proud individuals it references, as “Minor Attracted Persons.”

…MAP’s have been using social media under this self-identifier for some time, sprouting up and organizing mostly from the blogging site, Tumblr. Currently, there is a petition to have openly expressing MAPs removed from the site.

The author refers to two websites for MAPSs to engage with one another.* (ed. note: Both of those sites are not longer accessible.) I have been told by some folks that there is a movement to stop access to such sites in some search engines.

The author, who identifies as a trans women, wants to be sure that her readers understand two points.

1. The LGBT community does not wish to allow these people to identify with their community.

Since the burgeoning of my own self awareness and subsequently imposed shame regarding my gender as a result of seeing anti-LGBT evangelists and politicians behind their podiums using fear tactics to influence their audiences against me, I have lived in fear of this false equivalency. They would typically say things like; “This LGBT community is the downfall of civilized society, soon they’ll be adding a ‘P’ to include and protect child rapists and other atrocious acts like bestiality!”

I remember how scared I was that anyone would ever presume I was, or would advocate for those who victimized children and animals.

…I’ve been warning Parents I know about the uprising of MAPs, so that they can both protect their children from predators and prepare themselves for the inevitable onslaught of comparisons that will be made to the LGBT community

2. MAPs must not be allowed to identify as simply having a simple mental illness such as depression.

It is evident that she believes:

MAPs have taken over social media and it’s causing confusion.

Their postings were removed from TUMBLR.

Tumblr never addressed this issues which had been a continuous complaint from Tumblr users. After the Tumblr NSFW purge, MAP’s needed a new platform to form their community.

The most interesting thing about the MAP community is that they are not all adults. Teenagers as young as 15 identify as MAP’s, meaning they are attracted to smaller children. On some MAP profile you can find the acronym “AOA”, meaning “age of attraction”, followed by an age range. This can be especially harmful if they are also following people in their specified age range.

Even more disturbing, there are minors who consider themselves allies to the MAP community and think that what they do and who they are is not inherently wrong. That as long as they are not offending they deserve advocates. It must not be overlooked that these are minors advocating for societal norms to change and allow pedophiles to live their lives freely, doing what they must as long as no one gets hurt.

It can be difficult to identify the difference between a MAP and NOMAP.

Here is a link to one NOMAPs thread on twitter. https://twitter.com/hashtag/nomap?lang=en

What does this have to do with Menlo Church and John Ortberg?

I wrote several posts on the matter.

John Ortberg Is Place on Leave After Allowing a Man With Sexual Feelings for Kids to Work With Kids. I Think Everyone Missed a Cry for Help.

As John Ortberg Returns to the Pulpit, Menlo Church Leaders Should Be Ready to Answer Some Questions

What should we think about NOMAPs versus MAPs?

There is very little written about the number of NOMAPs who do act on their paraphilia. Until such a time, one must be prepared for the potential of *acting out* on the part of the NOMAP. For such a NOMAP, this might be a one time slip up. For his victim, it could be a trauma that affects him or her for the rest of their life. Therefore, intensive psychiatric intervention is absolutely recommended.

This is an organization dedicated to helping MAPs deal with their disorder.

B4U-ACT is a collaborative effort of mental health professionals and people who are attracted to children or adolescents to accomplish the following purposes:

to publicly promote services and resources for self-identified individuals (adults and adolescents) who are sexually attracted to children and seek such assistance
to educate mental health providers regarding the approaches helpful for such individuals
to develop a pool of providers who agree to serve these individuals and abide by B4U-ACT’s Principles and Perspectives of Practice
to educate the public regarding issues faced by these individuals
B4U-ACT holds workshops for mental health professionals and students, gives presentations at professional conferences, provides speakers for university classes, collaborates with researchers, communicates with professional organizations and journalists about the needs and rights of people who are attracted to children or adolescents, and runs support groups for both them and their friends and family members.

OUR VALUES
Individuals who are sexually attracted to children are the focus of everything that we do.  Compassionate assistance in dealing with the difficulties of living in society with an attraction to minors is essential to our success. Integrity is never compromised.  Diversity is recognized and respected.

Would I leave a child with a NOMAP?

At this time, I would absolutely not leave a child with a person I knew was a NOMAP/MAP. Nor do I think a NOMAP/MAP should ask to take care of a child. 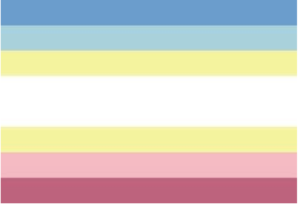 According to SN0PES, this rumor is false.

Rumors holding that MAPs (Minor Attracted Persons) created a pride flag in an attempt to join the LGBTQ community originated with a troll experiment on Tumblr.

…This picture does not represent a “MAPs Pride Flag.” Rather, the image was created as part of a troll experiment on Tumblr.

When pictures of this “MAP flag” began circulating on Facebook, the posts typically included messages warning other social media users to be wary of anyone displaying this flag:

However, there has been considerable pushback on this. So, be advised.

Finally, if the volunteer was truly an intimate friend or even had a closer relationship with John Ortberg, it seems to me that said person was given far more grace than the average church member. Am I wrong?

I look forward to your thoughts on this post.