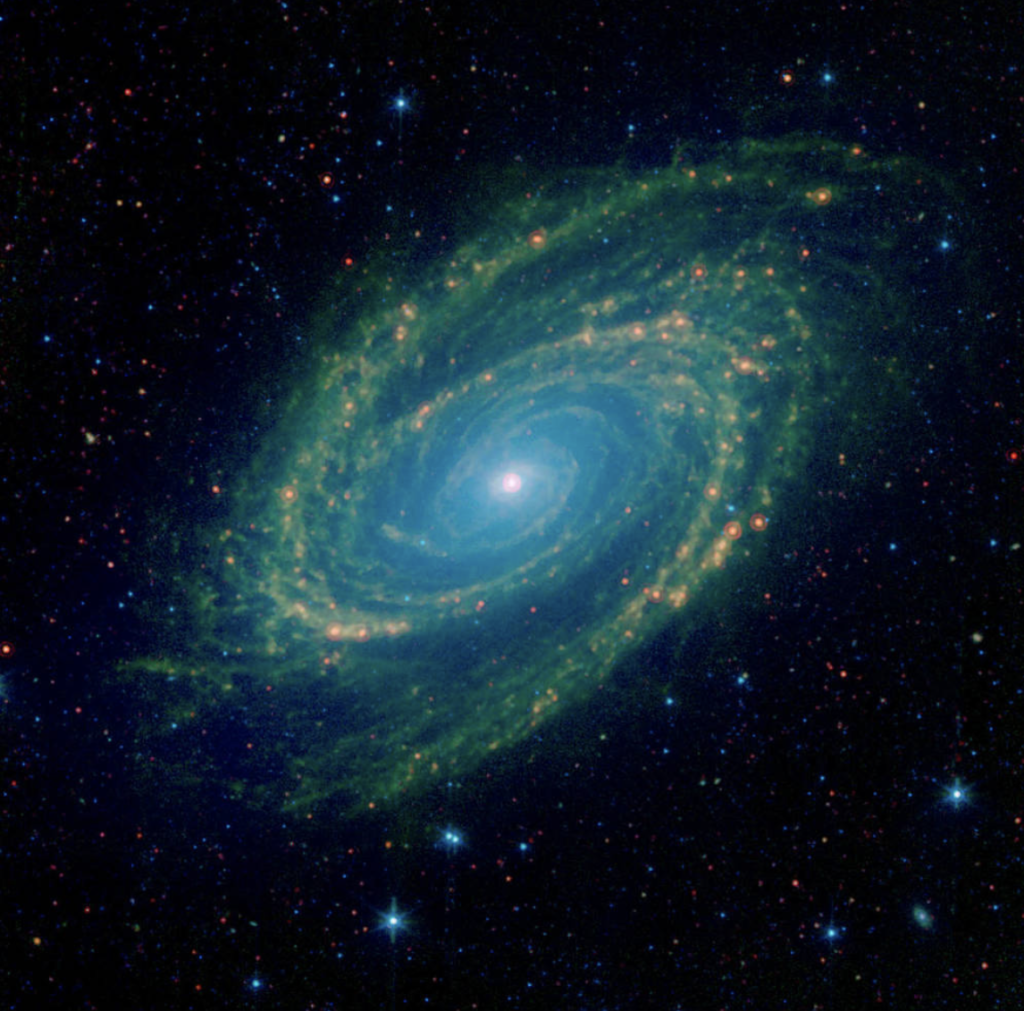 “I found it is the small everyday deeds of ordinary folk that keep the darkness at bay, small acts of kindness and love.” –J.R.R. Tolkien

I have a different take on this situation which can be found at the end of the post.

The Danny Lavery’s Twitter about his conversation with his father.

Towards the end of last week, I was tagged on thew following tweet by James Lavery who is reportedly estranged from his well-known pastor father, John Ortberg. (I have been given more information on this from a reliable source but have chosen not to disclose it at this time.This is a difficult situation.) His church is Menlo Church and he is the husband of Nancy Ortberg. Here is a copy of what I received. 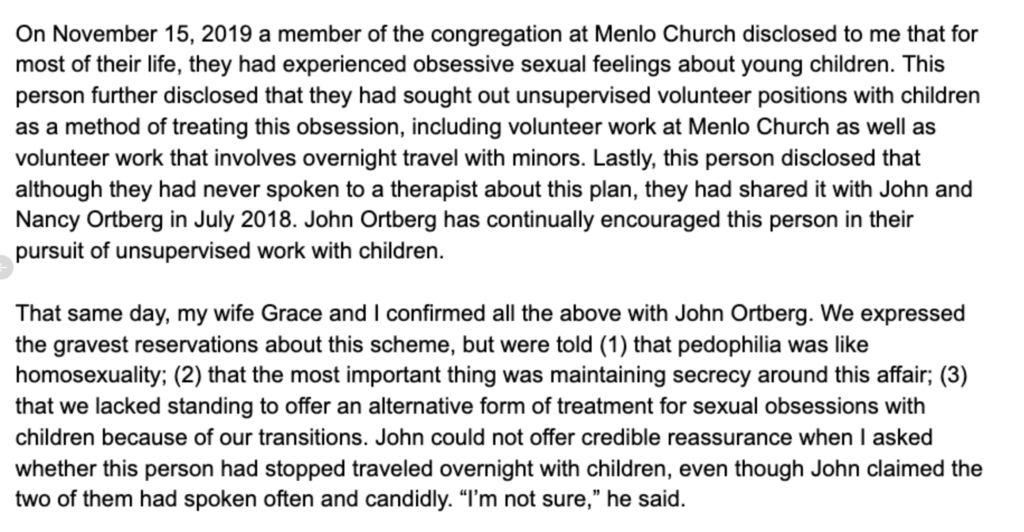 Needless to say I needed to think about this. This statement was preceded by Lavery saying that this is all that he was going to say on the matter. I checked to see if I could send him a message but he has turned that function off on Twitter.

Religion News Services posted Pastor John Ortberg allowed volunteer who was attracted to minors to work with children which gives some insight into Lavery.

Lavery, who writes the Dear Prudence advice column for Slate.com, said that he suggested that the church member seek treatment and immediately stop volunteering with church. He also said he wrote to Ortberg and urged him to report the situation to the church’s elders. When his father did not do that, Lavery said he and his wife reported their concerns to the church board.

Lavery said that he did not know if the church member had ever acted on their attraction to minors.

RNS also posted this history on the Ortbergs.

Ortberg did not reply to a request for comment. However, after RNS emailed the pastor, a church staffer sent RNS the statement from the elders.

A former teaching pastor at Willow Creek, Ortberg and his wife, Nancy, made headlines in 2018 when they raised questions about the conduct of megachurch pastor Bill Hybels. Ortberg is a popular speaker and author of books like “Soul Keeping,” “The Life You’ve Always Wanted,” and “If You Want to Walk on Water, You’ve Got to Get Out of the Boat.” He also hosts the “What Were You Thinking?” podcast.

This story has been updated to clarify that the church volunteer no longer works with children and no misconduct was found.

John Ortberg was placed on a leave from the church.

Here is a copy of the letter the church sent to members. I thank the person who sent this to me. 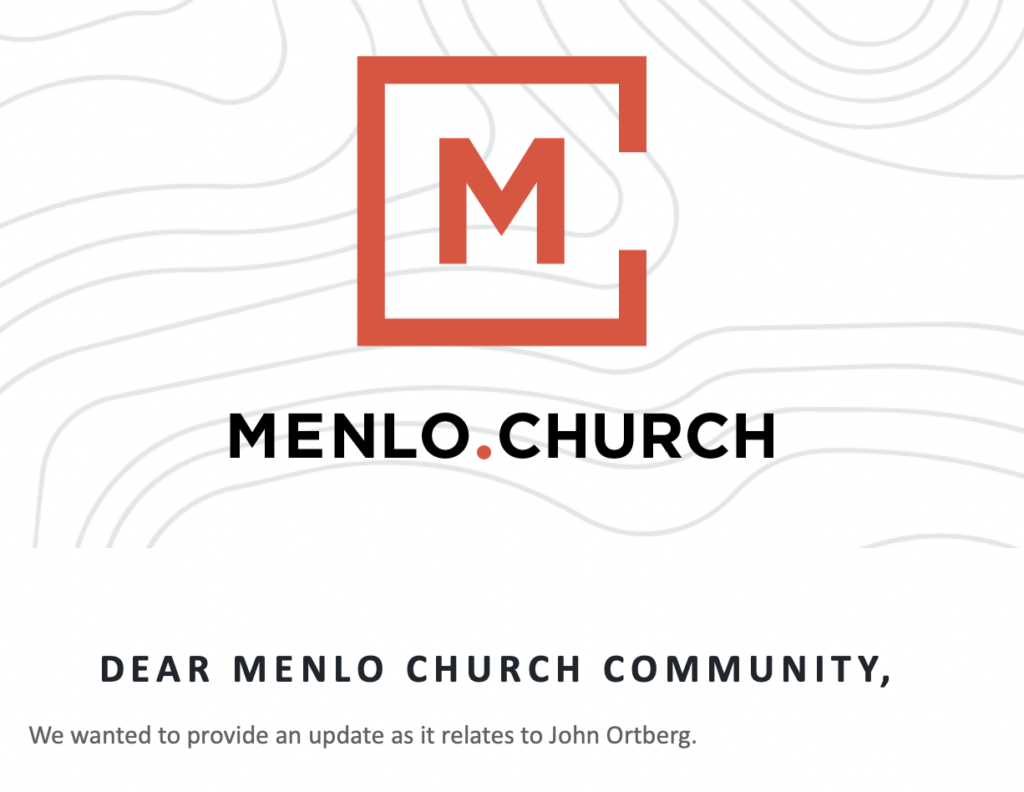 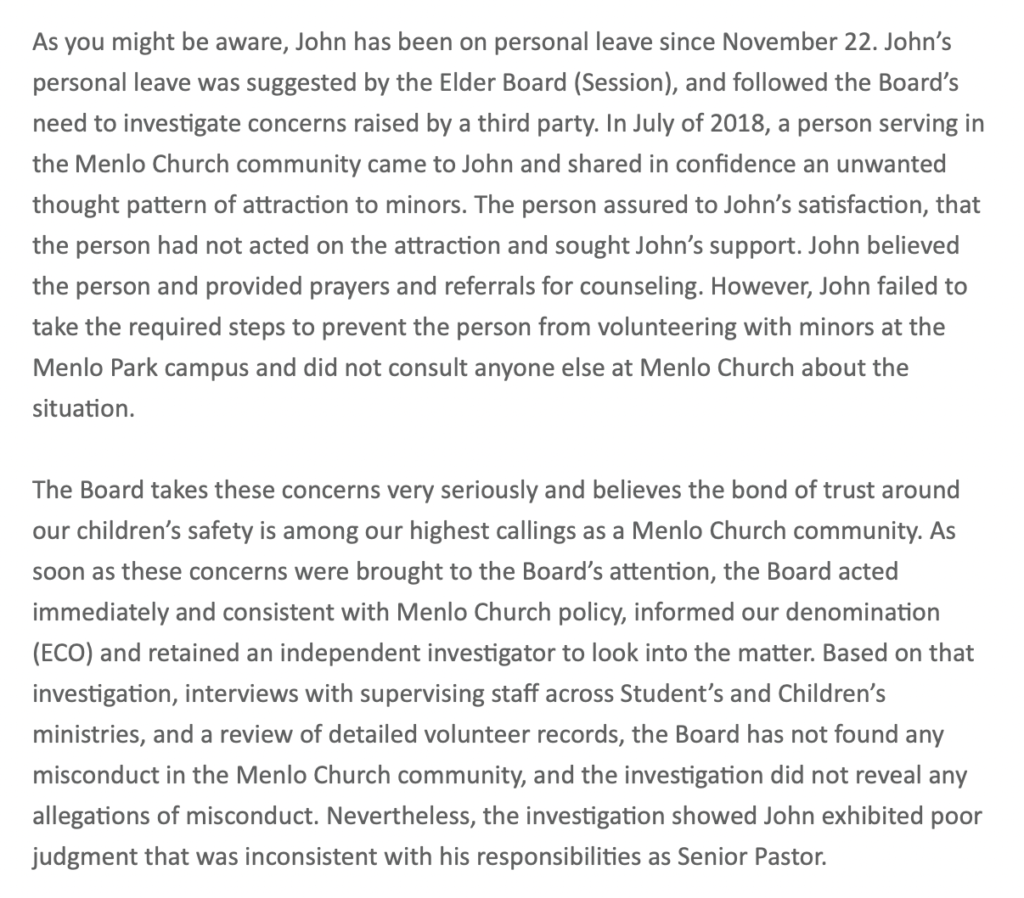 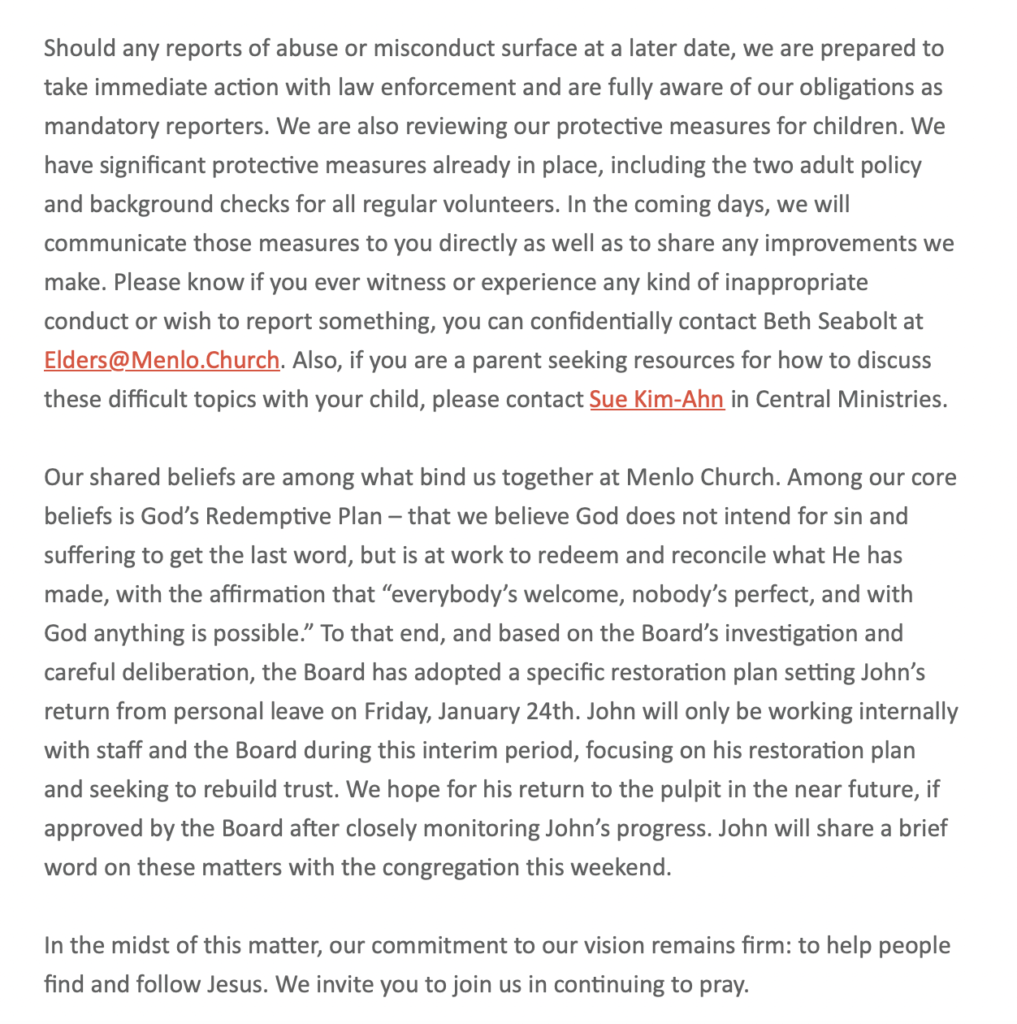 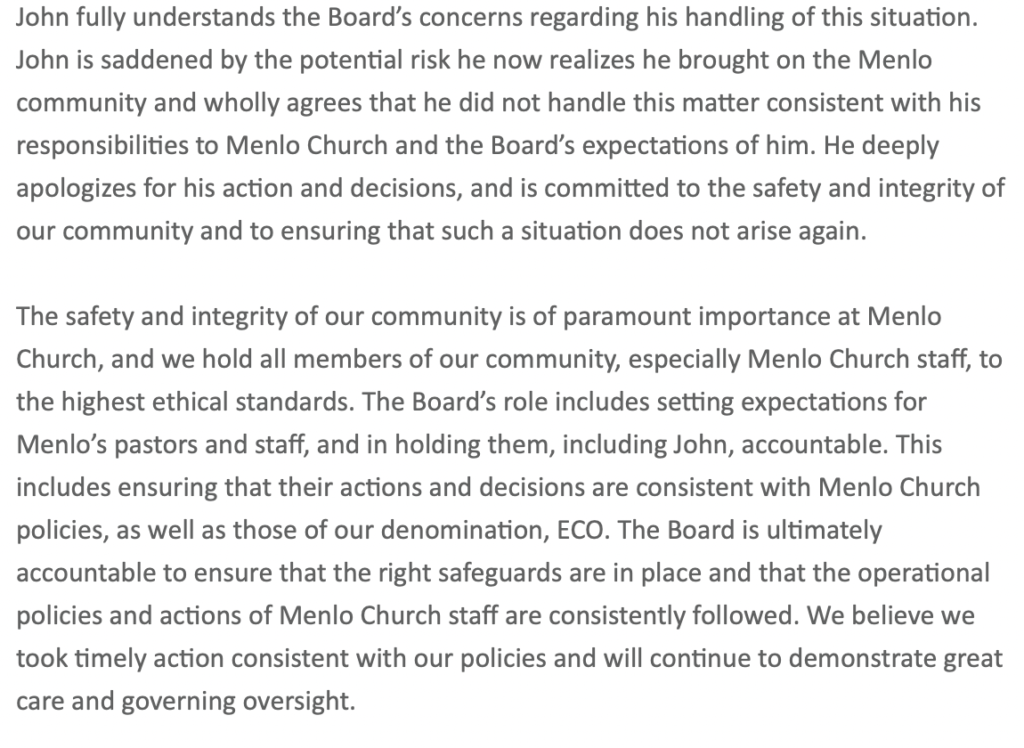 This letter was sent by Beth Seabolt, Elder Board Chair on behalf of the Session.

So, what can we learn from this letter?

I was told by one source that the person in question is a male. However, that has not bee written everywhere and I appreciate the pushback.I am changing the descriptors.

Both Roys and RNS moved quickly on this story. I am grateful to see such great people working on abuse issues.

Ortberg and his wife, Nancy, used to be employed by Willow Creek Community Church, and were one of the first to defend the women who accused former Willow Creek senior pastor, Bill Hybels, of sexual misconduct.

She also pointed out another aspect of Lavery’s narrative that I found most disturbing.

Lavery said that the same day, he and his “wife,” Grace, talked with John Ortberg and expressed “the gravest reservations.” However, Lavery said Ortberg dismissed his concerns, saying that “pedophilia was like homosexuality”; “the most important thing was maintaining secrecy”; and that Lavery and Grace “lacked standing” to offer alternative treatment for sexual obsessions with children because of their recent “transitions.”

Lavery said he asked Ortberg whether this person had ceased traveling overnight with children and Ortberg responded, “I’m not sure.”

Here is a link to the audio that Julie Roys posted on her website.  She provided an embed code so this can be shared with others.

Dee’s thoughts on the matter of the dangers of paraphilia

I believe that it is possible that the man/woman with sexual feelings towards children may have gone to Ortberg because he/she was reaching the end of his rope in dealing with his problem. In other words, this may have been a cry for help. I believe that this person knew that he/she was in trouble and that he /she may have already acted on his impulses.

Instead of sending him for intensive help, Ortberg allowed  him/her to continue working with children since, in Ortberg’s decidedly limited, uneducated assessment, this man/woman wasn’t harming anyone. He/she was going on overnights with kids from the church, for crying out loud!!!

This man/woman does not spend 24/7 inside the church. It is entirely possible that there were and are situations in the community that the church doesn’t know about.

A paraphilia, like the one this man/woman is experiencing, is a profound psychiatric problem for which one can hope for control with intensive therapy. I said *control* not *cure.* I have written on this subject multiple times.

Here is an overview from Merck Manual.

Paraphilias involve sexual arousal to atypical objects, situations, and/or targets (eg, children, corpses, animals). However, some sexual activities that seem unusual to another person or a health care practitioner do not constitute a paraphilic disorder simply because they are unusual. People may have paraphilic interests but not meet the criteria for a paraphilic disorder.

The unconventional sexual arousal patterns in paraphilias are considered pathologic disorders only when both of the following apply:
-They are intense and persistent.
-They cause significant distress or impairment in social, occupational, or other important areas of functioning, or they harm or have the potential to harm others (eg, children, nonconsenting adults)

People with a paraphilic disorder may have an impaired or a nonexistent capacity for affectionate, reciprocal emotional and sexual intimacy with a consenting partner. Other aspects of personal and emotional adjustment may be impaired as well.

Anxiety or early emotional trauma interferes with normal psychosexual development.
The standard pattern of arousal is replaced by another pattern, sometimes through early exposure to highly charged sexual experiences that reinforce the person’s experience of sexual pleasure.

The pattern of sexual arousal often acquires symbolic and conditioning elements (eg, a fetish symbolizes the object of arousal but may have been chosen because the fetish was accidentally associated with sexual curiosity, desire, and excitement).

For those of you who are like me and want to read a more in-depth presentation. I suggest NIH materials. This is one I particularly find helpful.  Paraphilias: definition, diagnosis and treatmentAt the end of the article is a list of resources that I have used in the past.

Sadly, I believe that it is probable that this man/woman has acted upon his/her feelings. At the minimum, he/she was crying for help. There is a reason that this sort of problem must NEVER be treated secretly.

No one lights a lamp and hides it in a clay jar or puts it under a bed. Instead, they put it on a stand, so that those who come in can see the light. For there is nothing hidden that will not be disclosed, and nothing concealed that will not be known or brought out into the open.

Warning: when dealing with these issues, one can be sure that something’ll happen to bring the secret to light. And when it does, it will be messy and painful. Deal with it upfront, You’ll sleep better.