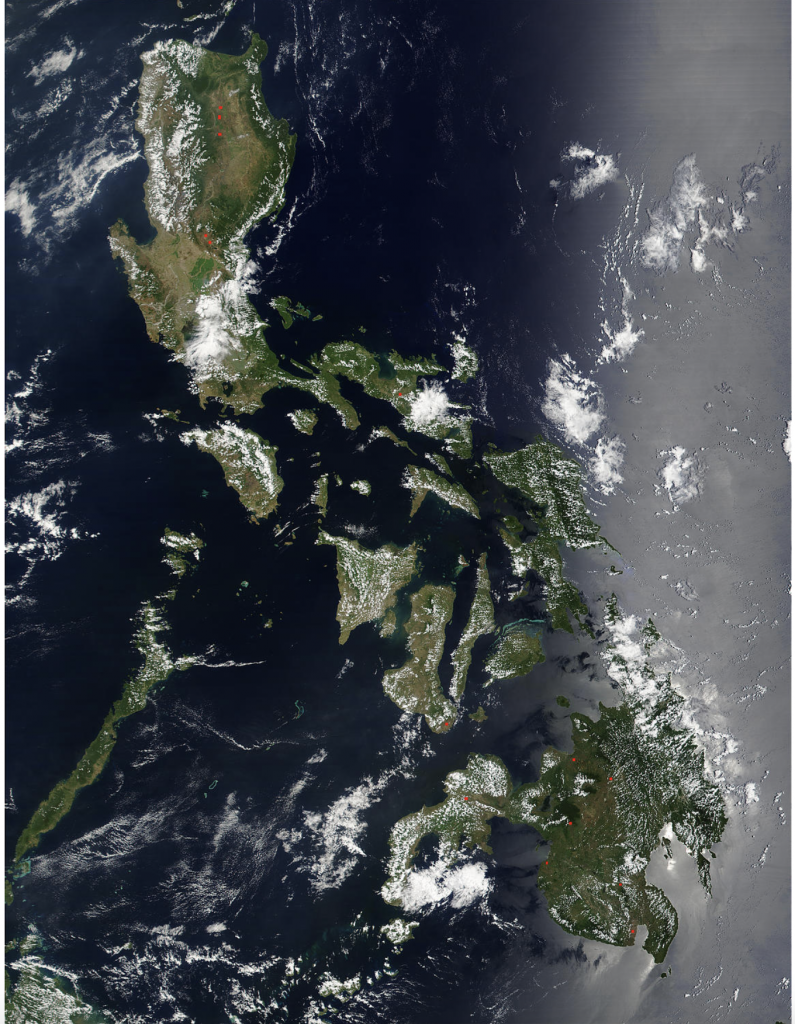 View of Philippines from space:NASA

“Abuse manipulates and twists a child’s natural sense of trust and love. Her innocent feelings are belittled or mocked and she learns to ignore her feelings. She can’t afford to feel the full range of feelings in her body while she’s being abused—pain, outrage, hate, vengeance, confusion, arousal. So she short-circuits them and goes numb. For many children, any expression of feelings, even a single tear, is cause for more severe abuse. Again, the only recourse is to shut down. Feelings go underground.” ― Laura Davis, Allies in Healing: When the Person You Love Is a Survivor of Child Sexual Abuse

In conversations with fellow online advocates, I have been startled that so many of them know about the story of Sankey Home Until I began writing about this situation, I knew very little. The more I learned, the more concerned I became. I lay blame for the confusion at the feet of the pastors and leaders at Christ Community Chapel as well as those who worked at the childrens’ home.

It is so easy to overlook the pain and suffering of children in a foreign country. One might reasonably suspect that destitute children of a different ethnicity or color might be placed low on the totem pole of concern for those in far off Hudson, Ohio. Hudson has been described as a community which is wealthy and insular. I wonder what would have happened if similar charges had been made about a local prep school filled with children of well heeled parents like Western Reserve Academy?

I have created this post to become a stand alone page at TWW so that those who want to understand what is alleged may be able to quickly find relevant material. As such, this page will be open to the addition of documents, news items and videos as they become available.

An introduction to this page by Sankey Advocates

For the past five years, Christ Community Chapel has neglected to share significant information about sexual abuse at Sankey Samaritan children’s home in the Philippines. The following documents show clearly that the church was given victim testimonies. Yet they chose to protect their pastor, Tom Randall, and presented a narrative blaming a “rival missionary”. Our desire is for the victims to finally have a voice. Even today, victims are still willing to speak — the final document in this set is a victim’s story of abuse shared just last year. These young people deserve better, and it is time they are heard.

The following are the documents that are included in this post/permanent page:

Joe Coffey is senior pastor at Christ Community Chapel and a close friend of Tom Randall. It’s instructive to compare Coffey’s statements against the record:

Before he [Tom] went, he got a communication from somebody in the Philippines who was very concerned about some rumors that were coming out of the orphanage. And they were rumors about misconduct. And the rumor itself that got to Tom — because he and I sat and talked about it — was that the worker who is in charge of the orphanage, a man named Toto Luchavez, had kissed one of the fifteen-year-old girls.

Joe Mauk seems like he is increasing his efforts to smear Tom and CCC. Joe Mauk, who triggered the raid, has lost all credibility in the Philippines and is desperate to try to exonerate his actions. Thanks for trusting us. One of the interesting things about anyone who gets infected by Joe is that they all refuse to even meet with Tom and Karen and hear their story.

1. Email from Joe Mauk to Tom Randall informing him of the ﬁrst two victims (November 5, 2013)

2A. Letter from Victim 1 sent to Tom Randall (Redacted)

2B. Letter from Victim 1 – Translated (Redacted) 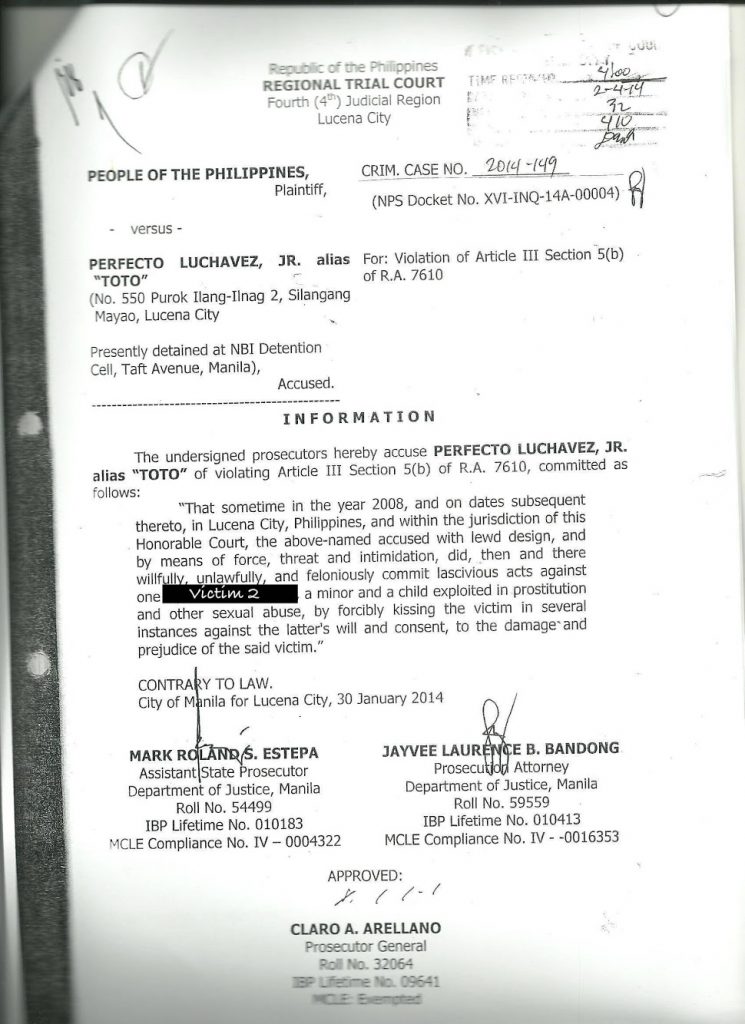 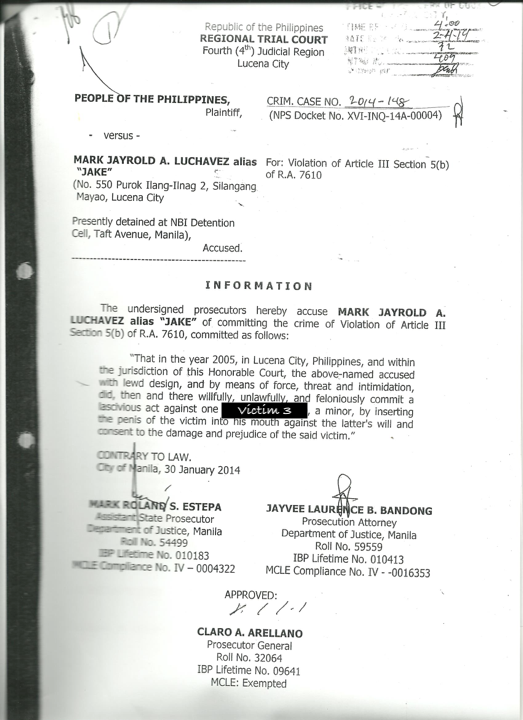 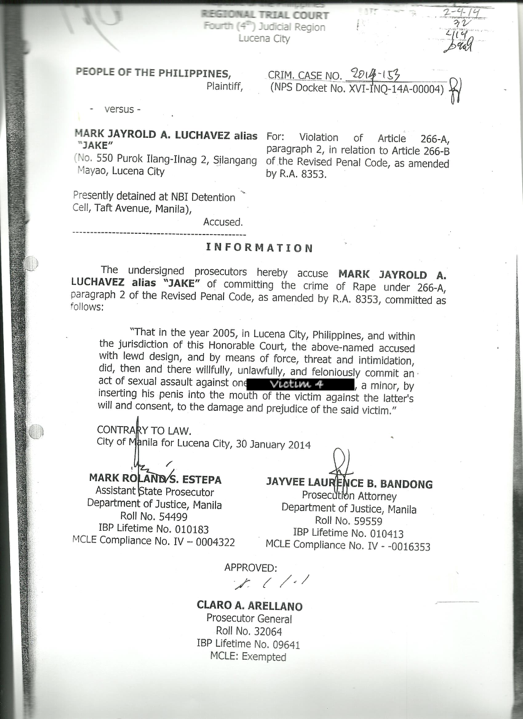