“I’ve been the editorial director of 9Marks for over a decade, and part of the church behind the ministry for two. I don’t often hear criticism with language this strong; maybe one or two other times.”

"Don't Be a 9Marxist!" – Jonathan Leeman 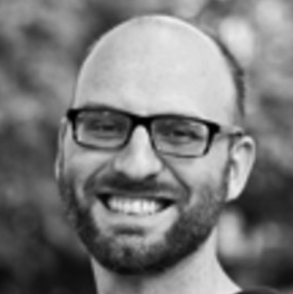 Todd Wilhelm, who was once a member of a 9Marks church in the Dubai, wrote a response to Leeman's "Don't Be a 9Marxist!" post entitled 9Marks Attempting "Brand Enhancement".  Quite a few commenters chimed in on both of these posts.  Jonathan Leeman's post garnered over 30 comments, most of which were challenging, if not critical.  Suddenly (we believe at the beginning of the weekend) ALL of the comments under Leeman's 9Marxist post disappeared.  I had saved them just in case they were ever deleted (it wouldn't be the first time that things have disappeared from the 9Marks website).  When I heard the comments had vanished, I planned to write a post on Monday.  Todd beat me to it and put together such an excellent summary that we felt it necessary to re-publish it for our readers.  Here it is… 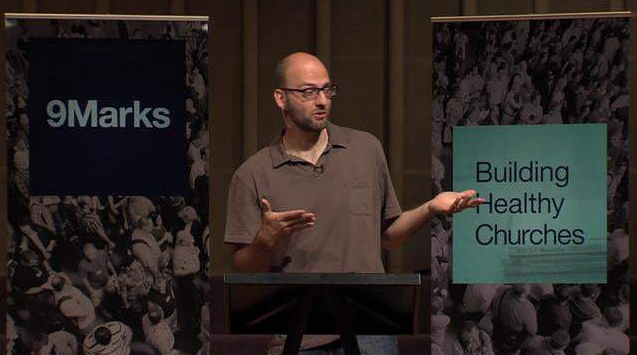 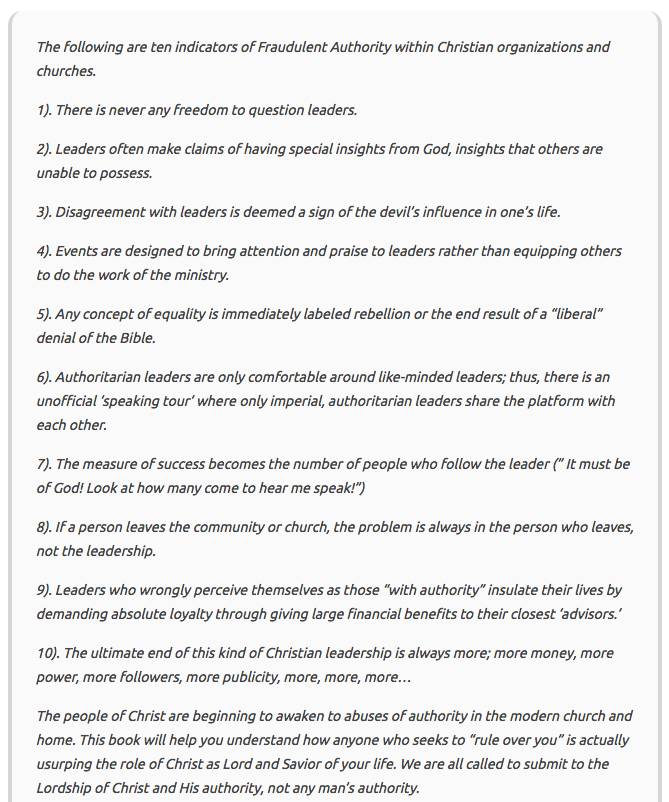 In my previous blog article, “9Marks Attempting “Brand Enhancement,” I responded to Jonathan Leeman’s article, “Don’t Be a 9Marxist," published on the 9Marks blog, the official voice of the parachurch organization.  The gist of Leeman’s article was an acknowledgement of hearing about some problems of heavy-handed authoritarinism, but these reports are few. After quoting a lady (a friend of mine) who had major issues at a 9Marx church and subsequently wrote a negative review of Mark Dever’s book, “Nine Marks of a Healthy Church,”  Leeman replied:

“I’ve been the editorial director of 9Marks for over a decade, and part of the church behind the ministry for two. I don’t often hear criticism with language this strong; maybe one or two other times.”

If you’ll buy that I’ve got some ocean front property in Arizona to sell you.  The fact the Dever and Leeman had a break-out session at the T4G conference in April of 2016, and that Leeman subsequently wrote this article are clear indicators that the 9Marx boyz have a problem on their hands, a problem that they are only too well aware of. One doesn’t write a lengthy, fifteen-point article in response to two or three complaints of spiritual abuse.

Leeman’s article attracted at least 31 comments, both positive and negative.  Earlier today I was notified by a reader that all the comments on Leeman’s article had been removed! I wasn’t surprised.  The 9Marx, T4G, TGC “leaders” frequently remove comments and block individuals from their sites. (See my previous blog article for two examples of mine.) These blocked individuals generally are not blocked for crude or spiteful comments, rather, they are generally individuals who respectfully disagree with the the christian celebrity “leader.” A few years ago TGC blocked anyone who tweeted the hashtag #IstandwithSGMvictims. This was done to draw attention to the fact that the Gospel Coalition had issued a statement of support for C.J. Mahaney, a man credibly charged with blackmail and covering up sexual abuse of children in his Sovereign Grace denomination.

The simple fact is that these leaders love to utilize social media to solicit donations, sell their books, promote their conferences and expound their viewpoints of “orthodox” Christianity, but the heavy-handed authoritarians cannot accept any comments critical of their views. They have yet to learn that, unlike their local churches, where they can practice their tyrannical ways with impudence, those in the blogosphere are unafraid to question them, and in fact often do. A guy like Leeman, accustomed to the rock-throwing peasants genuflecting to him, appear to be unable to handle any sort of criticism from lowly, uneducated, edgy individuals such as myself.

I experienced the same type of behavior from John Folmar, a man who, like Leeman, was also mentorred under the tutelage of Mark Dever. Folmar is the senior pastor of United Christian Church of Dubai, the church I quit three year ago. You can read a brief story about that here.  Basically, Folmar didn’t like me placing links to articles about C.J. Mahaney’s shenanigans (they were “unhelpful”) on a private Facebook page, so he managed to get them deleted.   You can read a 9Marx article by Folmar on how he successfully implemented the 9Marx manifesto here.

Leeman, seemingly unaware that information, including truthful comments that he finds “unhelpful,” once published on the internet, are not easily deleted. Ahh, how he must long for the good-old-days when a “divisive” congregant could be intimidated into silence.  (I believe in evangelical church-speak the term is “submitting to your elders.”) Anyway, I asked Janna, my trusted blog partner, and technical wizard, if she could dig up the “unhelpful” comments Leeman had deleted.  It took her all of about a minute.  Please read them below, or if you would prefer, you can go to this link and view them. Be advised you will need to click on the “Comments 0” at the end of the article to make the missing comments appear.

Sorry Jonathan, it kind of sucks not having control, no?

Word quickly spread through social media that Leeman had removed the comments from his 9Marx article. Dee, of The Wartburg Watch fame, tweeted this message to Leeman:

Leeman then responded with this Tweet below.  (I couldn’t resist adding my two cents!) Leeman’s comment seems disingenuous at best. He states that believe it or not, he almost never looks at comments.

I choose the “not” option.

You will notice, about half-way through the comments Leeman made a comment, thanking Dwight (no relation to Newt) Gingrich for his positive comment. I can only surmise that Leeman’s vision magically fogs over when he comes to the negative comments because he has only heard strong criticism once or twice before. Or, perhaps he is parsing his words, as Bill Clinton did when asked about his sexual relationship with Monica Lewinski, famously replying, “It depends on what the meaning of “is” is. Plausible deniability my friend, that’s what it’s all about.  Leeman may have read hundreds of stories of spiritual abuse by 9Marx pastors, but that doesn’t mean he heard these stories! These highly educated men of the cloth can be so clever!

Does Leeman really expect us to believe him?  Remember at the beginning of his article he states:

“In a “one-star” Amazon.com review of a 9Marks book, the reviewer shares his (note: later changed to “her” after he read one of the negative responses he has never heard, informing that a woman actually wrote the review) experience of being a part of what he calls a 9Marks church.”

So Leeman, probably on a break at one of his many conferences, is just randomly scrolling through the web and stumbles upon a one-star review of his idol, Mark Dever’s, book “Nine Marks of a Healthy Church.” Really? The review is not that easy to find, but I am to believe a guy that says he almost never looks at comments and has heard only heard one or two negative comments about 9Marx just randomly came across this negative review?

The “not” option makes a lot of sense to me Mr. Leeman. 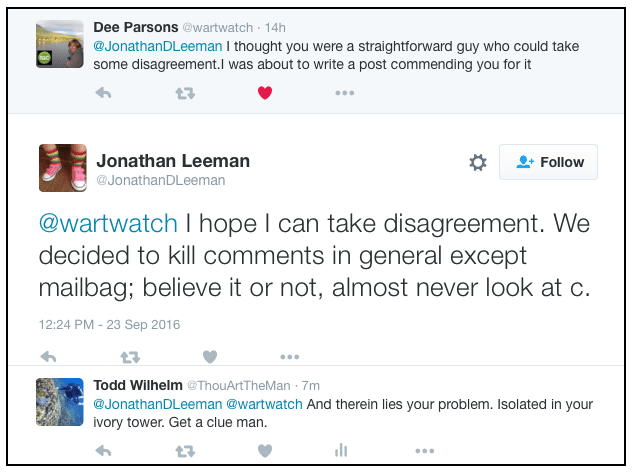 “We don’t ever block, tho,” states Leeman.

Yeah, I guess deleting comments en-masse is not blocking, right Mr. Word-Parser? And who is the “we?” Because your idol, Mark Dever, blocked me on Twitter years ago. I guess I probably deserved it.  I dared question  Mr. 9Marx Church Discipline extraordinaire if he found it a bit hypocritical to allow C.J. Mahaney to flee to Capitol Hill Baptist church to avoid discipline at Covenant Life Church.  Ahh, but some animals are more equal than others, especially if they have donated $10,000 of their church members money to Mr. Dever.

Go to Todd's post to hear the audio clips featured above. 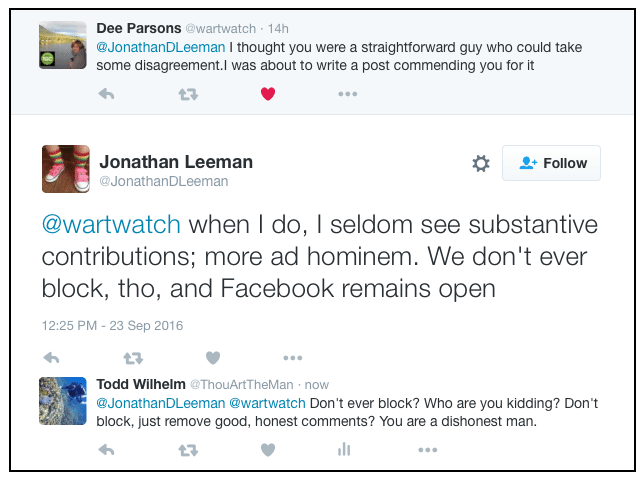 Next, I guess Leeman is attempting to play on our sympathies. The poor guy feels responsible for giving us irresponsible blog commenters a platform.

Tell me, Mr. Leeman, just what comments among the thirty-one listed above do you deem to be irresponsible?

I think most, if not all were good comments.  I wouldn’t remove one of them.  (Which is why I posted them all on my blog.) If you had issues with one, why not remove that one? As a highly educated “leader,” you should know that “shotgun” discipline is never a good idea, except perhaps in Marine boot-camp. On our blog, we respond to the offender, sometimes publicly, most of the time privately, letting them know their comment is unacceptable and why.

But now these nasty, irresponsible comments have shoved you over the cliff, the last straw, so to speak. I expect future articles from you will not allow for any comments.  A safe, sterile environment, where no dissension is tolerated, not unlike any authoritarian 9Marx church.

Let me offer you this quote to ponder:

So now we get to another diversionary tactic by Mr. Leeman.  Not only are these thirty-one comments irresponsible and non-substantive, they are….. drum roll….. ANONYMOUS! We all know how 9Marx leaders hate those anonymous comments.  Let’s take a stroll down memory lane and listen to Matt Chandler blow a gasket over an anonymous comment.

Go to Todd's post to hear the above audio clip.

Truth be told, Mr. Leeman, I believe you are unable to take criticism.  In your position, that is a major character flaw. I wonder how you manage to cope  in those weekly sermon reviews? Perhaps your peers, aware of your fragile make-up, abstain from any critical comments. Or perhaps, like many 9Marx churches, you surround yourself with yes-men for elders, lacking courage, they utter only what they know you want to hear. 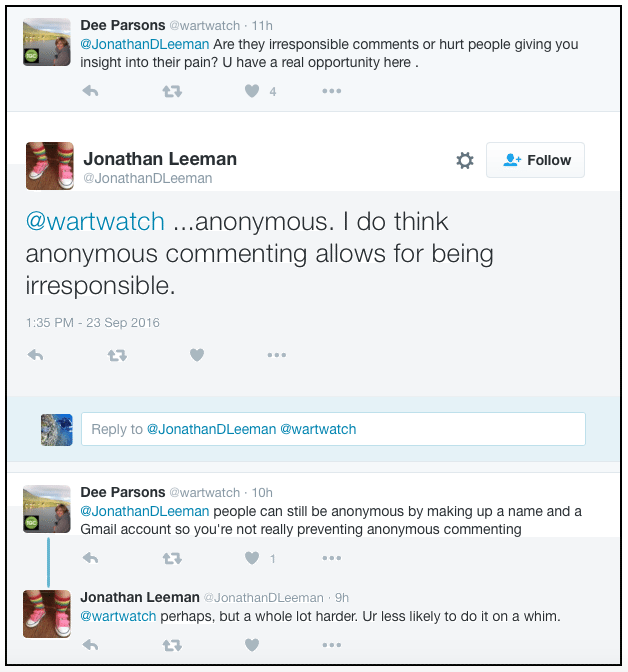 I leave you with a winsome quote from Spurgeon. I hope it serves you well.

Dee is planning to dialogue with Jonathan Leeman via email in the coming days.  Please pray that their exchange will be productive.