"If a church wants to hire a Calvinist pastor, then God bless them. Unfortunately, many Calvinist pastoral candidates are not revealing their Calvinism during the pastor search process in order to secure a pastoral position." 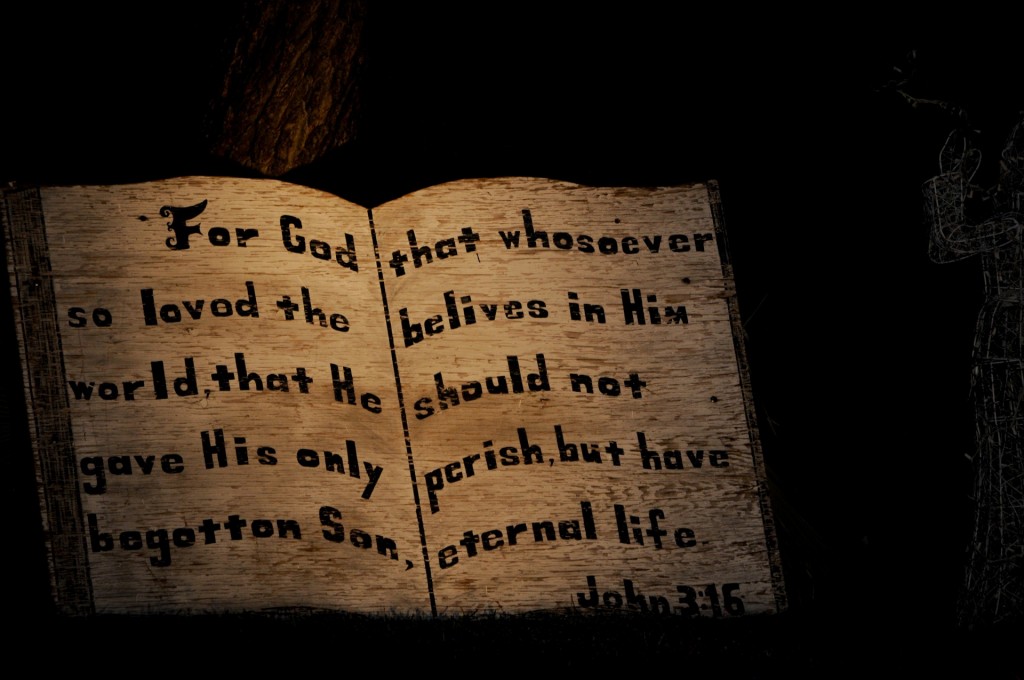 You know the saying… Hindsight is 20/20.  Well, there is a growing number of traditional Southern Baptist congregations that have uttered these words when it finally dawns on them that their newly hired pastor is Reformed (Calvinist).  How in the world did that happen?

Almost four years ago, the Biblical Recorder – a bi-weekly newspaper published by the Baptist State Convention of North Carolina – featured an article that helps explain how this trend is occurring.  Les Puryear, a Southern Baptist pastor who was nominated for SBC President in 2008, wrote a guest post which the Biblical Recorder published.  It was entitled:  Is there a Calvinist agenda to reform traditional Southern Baptist churches?  The article begins as follows:

Recently, I [spoke] with a pastor search committee about a pastor search they were conducting. When I mentioned that Calvinist candidates may not be forthcoming in regard to their true beliefs, they asked, “What is a Calvinist?”

I wasn’t surprised that a small rural church was not aware of the Calvinist plan to reform [Southern Baptist Convention] SBC churches.

It may come as a surprise to those of you who live in larger metropolitan areas, but the vast majority of Southern Baptist churches are relatively small.  Consider this statistic that was published just last year in the Baptist Press:

Approximately 90 percent of all Southern Baptist churches have 250 people or less attending worship on any given Sunday. Nearly 70 percent of all our cooperating churches have 100 or fewer in attendance each week. Less than 2 percent have more than 1,000 people present for Sunday worship. Clearly the Southern Baptist Convention is composed of far more smaller churches than larger churches.

That's an awful lot of pastor search committees that in all likelihood have no idea what's really going on with the Calvinista power grab taking place in the Southern Baptist Convention.  So far Al Mohler, President of the Southern Baptist Convention and architect of the Neo-Cal takeover, has managed to get Calvinists appointed to key leadership positions throughout the SBC.   An important next step is to get as many Reformed pastors as possible at the helm of Southern Baptist churches.  The seminaries keep pumping out graduates who are predominantly 'reformed' in their soteriology.  Is it any wonder that we are hearing about more and more traditional Southern Baptist churches that are unknowingly hiring pastors who have a different theological viewpoint, that being Calvinism?

First Baptist Church in Rocky Mount is one such church where this has recently happened.  It is interesting that Les Puryear's article appeared in the Biblical Recorder on July 30, 2012, and nine months later this same publication announced that Dennis Darville had been called to pastor FBC Rocky Mount, where he had been serving as interim pastor since January 1, 2012.

Before accepting the position of lead pastor at FBCRM, Dennis Darville had been Vice President of Institutional Advancement at Southeastern Baptist Theological Seminary (SEBTS).  The Biblical Recorder article written by Puryear included a statement by Darville's colleague, Dr. Daniel Akin – SEBTS President – which was originally published on the Between the Times website.   Akin admonished his students with these words:

“Act with personal integrity in your ministry when it comes to this issue. Put your theological cards on the table in plain view for all to see, and do not go into a church under a cloak of deception or dishonesty. If you do, you will more than likely split a church, wound the Body of Christ, damage the ministry God has given you, and leave a bad taste in the mouth of everyone. …”

Clearly, his colleague Dennis Darville didn't put his 'theological cards on the table in plain view for all to see'.  In hindsight, Darville appears to have gone into FBCRM under a 'cloak of deception'.  Members of FBCRM have come onto our blog to confirm that Darville did not reveal his plans to change church polity or its theological bent.  As a result, he did exactly what Akin warned against… He split the church, wounded the Body of Christ, damaged the ministry God gave him, and left a bad taste in everyone's mouth, including the TWW community.

Now in Rocky Mount there are two separate congregations, divided families, broken friendships, and total disharmony.  And this was all because Darville had an agenda that he was going to carry out no matter what.  Never mind that the super majority voted down his plan to change the church polity from congregational to elder-led.  It appears that Darville and his colleagues at FBCRM began secretly planning a new work some time after the disappointing vote.  We understand that he was able to gain access to the giving records of the congregation, so he knew who the large contributors were.  Remember how Maranatha Campus Ministries was accused of keeping close tabs on tithing?

Does any of this sound like God's will for His church?  Absolutely not!

Getting back to the premise of the post…  Is there a Calvinistic agenda to reform traditional Southern Baptist churches?

It's been four years since Les Puryear's article was published, and history has proven that there is indeed a Calvinist agenda…

The Biblical Recorder article ends with these sobering words:

Ernest Reisinger, the chief architect of Founders, a Calvinist ministry, describes in great detail [in an article on the Founders Ministries website] how to “reform” a traditional church. He even gives the agenda a name: “The Quiet Revolution.” Make no mistake, there is an intentional effort to “reform” traditional SBC churches into “reformed” (code word for Calvinist) churches.

But the main difference between Calvinists and other nontraditional Baptist candidates is that only Calvinists are actively trying to change local SBC churches to their beliefs.

In response to the Calvinist efforts to reform non-Calvinist churches, a group of traditional Southern Baptist leaders and scholars wrote a “Statement of the Traditional Southern Baptist Understanding of God’s Plan of Salvation.” The list of signatures includes over 250 pastors (representing small, medium, and large churches in 29 states), six former SBC presidents, seven state Baptist convention executives, four members of the Baptist Faith and Message 2000 committee, over 20 associational directors of missions, five Baptist seminary and college presidents, and hundreds of other evangelists, church staff members, and lay ministers. After the release of this statement, many Calvinists said they wanted unity in our convention.

Traditional Southern Baptists also desire unity, and I believe that unity is an attainable goal but only when Calvinists cease trying to reform traditional SBC churches to their views.

Ken Keathley, senior vice president of academic administration and dean of the faculty at SEBTS (and another colleague of Dennis Darville when he worked at the seminary), responded to Les Puryear's article.  Here is a portion of that response:

Les and I strongly disagree on one point: he intimates that Southeastern Baptist Theological Seminary (SEBTS) is complicit in a Calvinist attempt to takeover [Southern Baptist Convention] SBC churches. Absolutely not. Perhaps others have such a scheme; SEBTS does not.

Calvinism is a part of our Baptist heritage, so Calvinists deserve a place at the SBC table. But the majority of faculty at SEBTS do not subscribe to TULIP. And we have no faculty members who evangelize more for John Calvin than they do for Jesus Christ. Puryear also seems to assume that the typical rural church in North Carolina is a “traditional” Baptist church (“traditional” as defined recently in a statement published by Eric Hankins). Maybe; maybe not. During the 10 years I have lived in the Carolinas I have had the opportunity to preach in many rural churches. Instead of finding many “traditional” Baptist churches, to my dismay I have encountered numerous churches with practically no theological moorings at all. Many historic churches have had pastors who held to a low view of biblical authority with few doctrinal commitments, and the results have been very damaging. Without apology I contend that I would rather see the pastorate of those churches filled with mission-minded, Spurgeon-type Calvinists than to have those congregations remain in the theological murkiness in which many are wandering.

Southeastern Seminary does have an agenda – the Great Commission…

I cannot emphasize enough that this exchange took place almost four years ago.  We believe history has proven Les Puryear to be correct — there has been an upswing in Calvinista takeovers.  To be frank — anyone who tries to deny it is either deluded or lying.

Just look at what happened when Southern Baptists gathered in St. Louis last week to elect a new president.  In the run-off election, the votes were divided 50/50 between Steve Gaines (who is a Non-Calvinist)  and J.D. Greear (who self-identifies as a Calvinist).  Greear bowed out, and Gaines became SBC President.  In case you missed it, we covered the story here.

And to show that this continues to be a hot topic, take a look at these comments posted over on Jared Wilson's blog (on The Gospel Coalition website) over the last few days: 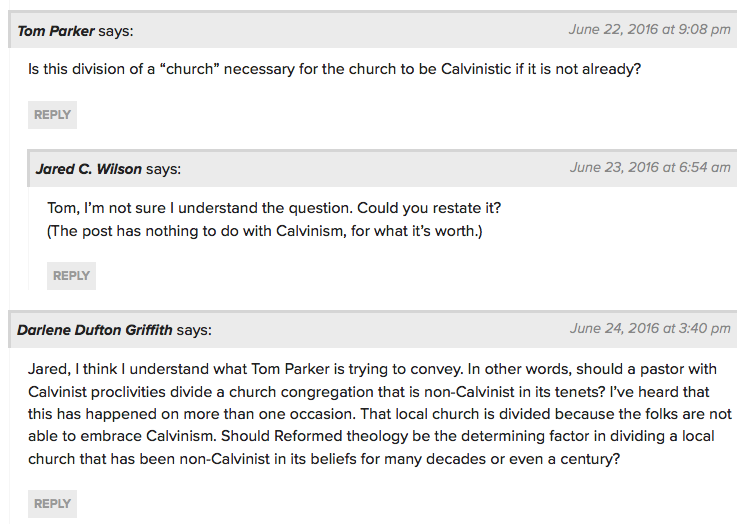 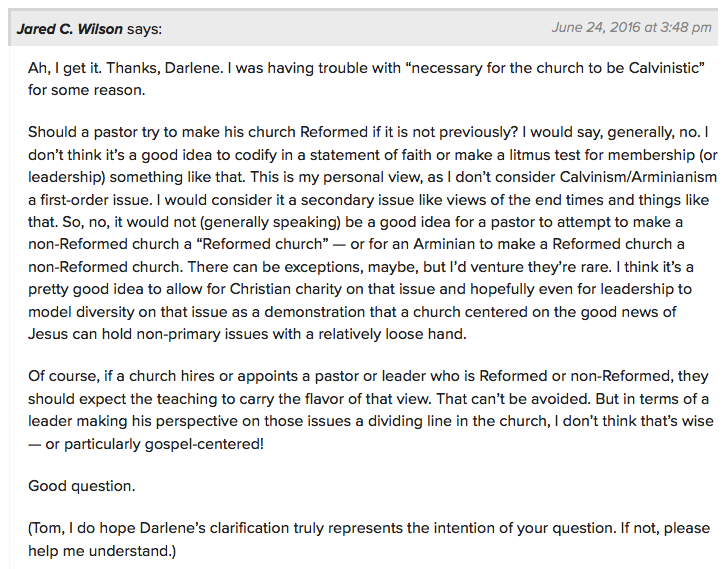 For churches like First Baptist Church Rocky Mount, which will no doubt be hiring another pastor at some point, we have some excellent information that should help them avoid the fiasco from which they are still reeling.

Before we get to that, allow me to rant one more time…

Can you just imagine what was going through the minds of FBCRM members outside the Calvinista bubble when ALL the pastors (except one) as well as the secretary and a good number of deacons and Sunday School teachers quit immediately following the 60/40 vote of confidence on February 14, 2016?  As Dee would say, that was DESPICABLE!!!

Just this evening I stumbled upon some incredibly helpful information that all pastor search committees should be using when interviewing pastoral candidates.  For those who are not savvy about Reformed Theology (Calvinism), this information will be a tremendous help!