"The chair declares at this time that Dr. Steve Gaines at the close of this session will become because of this election the president of the Southern Baptist Convention."

Ronnie Floyd, Presiding SBC President (at 13.03 mark in video below) 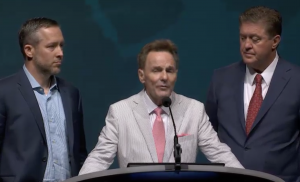 Messengers of the Southern Baptist Convention who convened for their annual meeting in the 'Show Me State' witnessed something unprecedented earlier today.  The presiding president, Ronnie Floyd, summed it up this way (at the 16.18 mark of the video below):

To God be the Glory.  He has moved.  Well, history was made yesterday, and history's been made today.  There is no one like the Lord.

Just how was history made?   Here's what happened during yesterday's meeting.  The nominees for SBC president were Steve Gaines of Bellevue Baptist Church (Tennessee), J.D. Greear, of Summit Church (North Carolina); and David Crosby of First Baptist New Orleans (Louisiana).

In the first ballot cast by 5,784 messengers, David Crosby received 583 votes (or 10.08 percent); Steve Gaines received 2,551 votes (or 44.1 percent); and J.D. Greear received 2,601 votes (or 44.97 percent). In this three-man race, none of the candidates received 50 percent of the vote plus one, which, according to SBC By-Laws, must be attained in order for a nominee to be elected president.

Hours later, a runoff between Gaines and Greear was held.  As he wrapped up the late afternoon session, SBC President Ronnie Floyd declared that the second round of voting was also inconclusive.  Although 7,230 messengers were registered at the time of the runoff, only 4,824 ballots were cast.  Steve Gaines received 2,410 votes (or 49.96 percent) while Greear received 2,306 votes (or 47.80 percent).

Unfortunately, 108 votes were ruled illegal because either a wrong ballot was used or an indistinguishable mark was made on the ballot.  According to Roberts Rules of Order, these illegal ballots had to be included in the total vote count, which threw off the percentage of votes each candidate received.  In order to attain 50% of the vote plus one, the candidate had to receive 2,413 votes.  In this second round of voting, Gaines was just three votes shy of receiving 50% of the vote plus one.

Yesterday evening Floyd informed messengers that there would be a second run-off election (to be held this morning).

When it was finally time to choose a president, Ronnie Floyd had J.D. Greear and Steve Gaines join him at the podium.  Floyd recognized Greear, who addressed the messengers by saying he was withdrawing his name.  This is what Floyd described as history-making.  Gaines spoke next, explaining that unity was of utmost importance to him and that he would be willing to step aside.  In the end, Gaines was declared SBC president.  You can watch this history-making segment below (see first 17 minutes).

As you might imagine, a number of news outlets jumped to cover this developing story.  The Christian Examiner shared the following in an article published earlier today:

Steve Gaines, 59, pastor of the Memphis area Bellevue Baptist Church was elected by acclamation as the new president of the Southern Baptist Convention today following the first day of the June 14-15 SBC annual meeting…

North Carolina pastor J.D. Greear withdrew his nomination to lead the largest non-Catholic denomination in America after two inconclusive votes, but then made a motion to elect Gaines by acclamation.

"I've said from the beginning it is tricky to lead the SBC," Greear said. "I've spent a good amount of time praying and I believe for the sake of our convention and our election we need to leave St. Louis united. … We are united by a Gospel too great, and a mission too urgent, to let a lesser message stand in our way. I am respectfully withdrawing my candidacy as president."

The Christian Examiner went on to explain that Steve Gaines, who had pastored churches in Alabama, Tennessee and Texas, succeeded the much beloved Adrian Rogers at Bellevue Baptist Church eleven years ago.  Rogers also served as SBC President twice – with the first presidency occurring in 1979 at the time of the Conservative Resurgence.  Shortly after being named Adrian Rogers' successor, Gaines came and spoke in chapel at SEBTS, and I drove out to hear him.  I still remember the title of his message – Ichabod.  (In the interest of full disclosure, I have also heard J.D. Greear deliver a chapel message at SEBTS and attended his church on two separate occasions).

Finally, the Examiner article states that Steve Gaines has held key positions in the SBC over the years.  For example, he preached the SBC convention sermon in 2004 and served as president of the SBC Pastors' Conference in 2005. He has served as as a member of the SBC Committee on Nominations, a trustee of LifeWay Christian Resources, a member of the committee that proposed a revision of the Baptist Faith and Message in 2000, and chairman of the SBC Resolutions Committee.

The Baptist Press explained what happened this way:

Following a runoff vote that didn't produce a majority winner on Tuesday (June 14), North Carolina pastor J.D. Greear announced Wednesday he would withdraw from the race for president of the Southern Baptist Convention during the SBC's annual meeting in St. Louis. Greear's decision — in an effort to help bring unity following a close vote — avoided a second runoff and left Tennessee pastor Steve Gaines elected by acclamation as president of the SBC.

Gaines said "there's no way God is not doing something in all of this." He said he has decided internally Tuesday night to withdraw but agreed to serve as president after a conversation with Greear.

"I just wanted Jesus to be lifted high" and the convention to be united, Gaines said.

Despite a call for unity after the declaration of a new SBC president, there must have been a great deal of tension between Calvinist and Non-Calvinist messengers over the last two days.  And who could blame the Non-Calvinists for being concerned?  After all, the heads of both the IMB and NAMB are self-identified Calvinists, whom we believe were anointed because of Al Mohler's influence.  Can there be any doubt that this trend will continue?  We're convinced that Mohler learned how to work the system from his colleague Paige Patterson.

For more background on Steve Gaines and J.D. Greear, check out a post we wrote when these men were first nominated.  It is entitled 'WHO' will be the Next SBC President:  Steve Gaines or J.D. Greear?  It was written before there was a third candidate.

The theme for this year's SBC meeting was Awaken America:  Reach the World.  Are Southern Baptists cooperating and succeeding at their mission?

We hope you will take the time to watch the above video and scan through the 'WHO' article, and as always, we welcome your observations and questions.