“Mommy loves you so much that I’m not going to let you act that way. You cannot talk disrespectful to Momma, and you will obey, and hopefully, you will eventually obey joyfully.” But either way, they need to obey. I won’t budge. 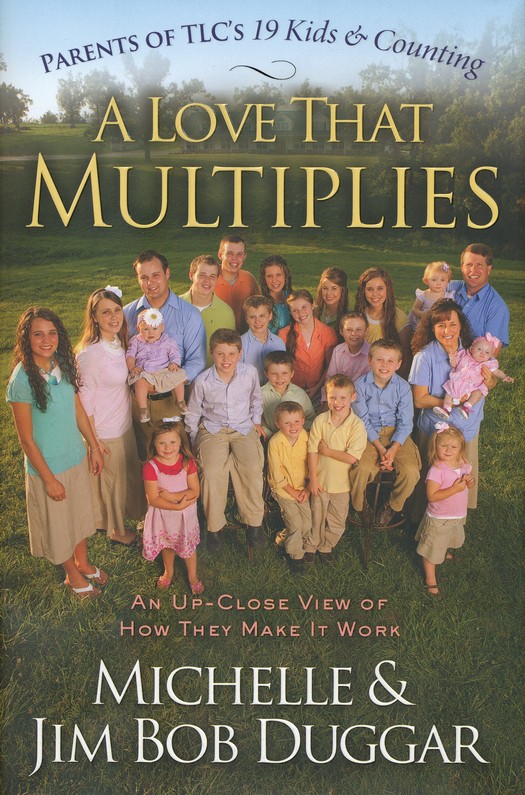 When I first heard about the Duggars in late 2008, I thought they were a wholesome Christian family with one quirk – they were quiverfull proponents.  I watched their 'reality' show a couple of times but quickly lost interest.  That was over five years ago…

Since then the Duggar agenda has become patently clear, and that will be the focus of this post.

We began to investigate the Duggar family in the summer of 2009 and did a series of posts on them.  Here are a couple articles from way back then (our blogging skills have improved quite a bit, as you can see).

"Ma Ma I Need an Appointment, I have a Boo Boo"

As the Duggars' star continued to rise, Michelle Duggar was presented with the 'Mother of the Year Award" at a baby conference held in 2010.  The event was sponsored by Vision Forum, and you guessed it…  Doug Phillips and his wife Beall presented Michelle with the award.  Here is an article that shared the news.

Michelle Duggar, mother to 19 and star of TLC's "19 Kids and Counting" received the "Mother of the Year Award" as part of a special ceremony at the Baby Conference: A Historic Family Summit on the Triumph of Life Over the Culture of Death, held July 8-10 in San Antonio. Michelle and her husband Jim Bob were featured speakers at the event, sponsored by Vision Forum Ministries, which drew more than 1,500 to the Alamo City.

"Michelle Duggar is the real deal," noted Doug Phillips, President of Vision Forum Ministries. "She embodies the very best of a Christian role model for women. She is a highly intelligent and gracious woman of God and a capable and faithful helpmeet to her husband Jim Bob.

In addition, you can read about Michelle's achievement over at Patheos.  There is also a video of this presentation — you may want to skip to the five minute mark when the award is given.

So how does Michelle do it?  After all, the above quote seems to indicate that she is proactive in all of her children's lives.  Here is a clip of a pregnant Michelle attempting to handle two of her children while answering questions for their TV show (notice the baby in the background).

As we began to investigate the Duggars (after blogging for several months), we quickly discovered their ties to Bill Gothard.  The Duggars utilize materials from the Advanced Training Institute (ATI) in their homeschooling pursuits, and some of the children have attended conferences held by Gothard's organization.  In fact, the oldest – Joshua – met his future bride at an ATI conference, as explained in their story (see excerpt below).

Josh: In early 2006, my Dad was campaigning for State Senate.  We were a couple weeks from the Primary Election when my family took our annual trip to the ATI Conference.  I was busy working with the A/V team, and had very little free time… but during one of the breaks I ended up talking through my lunch break with some new friends!… 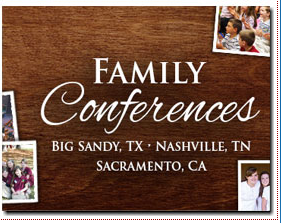 If you go to their website, you will see that the Duggars are encouraging their followers to attend conferences being held by Bill Gothard's organization.  The screen shot (on the left) is what currently appears in the top right corner.  If you click on the box, it takes you straight to the ATI Family Conferences page.  The first of these events for 2014 just wrapped up at Big Sandy in Texas.  Two more conferences will be taking place in the United States as well as two abroad.  According to the Examiner, Jim Bob and Michelle spoke at the ATI conference that was just held in Texas.

Recently, one of the 'alleged' victims of Bill Gothard, Megan Lind, wrote a letter to the Duggars asking them to reconsider their involvement with Bill Gothard's organization.  Here is what she had to say:

I speak from the perspective of one who experienced firsthand sexual harassment that parallels the personal stories told on the whistleblower website, Recovering Grace. Those stories were written by girls who worked closely with Bill Gothard, who is the founder of ATI, the homeschool curriculum and training convention your family uses and attends every year. I hope that this open letter will be heard from the heart by your family and the many others who are questioning your continued involvement with this group. Today, I am a married mother of two. My objective is to convey to you as a parent the concern I have for children being brought up in the authoritarian lifestyle espoused by Gothard.

My involvement in ATI set the stage for the unwanted sexual attention that I experienced at the hands of Bill Gothard. His teachings requiring unquestioning obedience by children that were taught to me by my parents, which they gained through their training via Bill Gothard’s enormously popular Basic Seminars in the early 70s. When I was a teen, I was sent to volunteer for Gothard at his seminars and training centers. Gothard paid special attention to me, and often asked me to travel in his personal van from center to center. When he was in town, Gothard would periodically request my presence in his office for long hours and late into the night for the purpose of counseling. His behavior toward me was what I would now define as predatory in nature, although at the time because of my over-protected upbringing, I was merely confused and uncomfortable. Bill would sit or stand close to me, stroke my back or my arm, and rub his hand along my leg, as he would tell me that he believed God had brought me to his ministry for a purpose. Even though Gothard taught firmly in his seminars and materials that an unmarried man should not touch a woman in this way, Gothard did so regularly with me and other girls I knew at the time.

Gothard’s followers are astoundingly loyal, even to the detriment of the victim. This may be why personal attempts to address the issues within the ATI movement have fallen on deaf ears until the recent public disclosures on the Recovering Grace website. Once, I went to Gothard’s leadership to express my discomfort with his attentions, and was severely disciplined for my efforts by being confined to my room for weeks, even for meals. At the end of my confinement, I was once again summoned to his office, and I did not complain again. This disciplinary structure pervaded his entire ministry at varying levels, and I believe that it was a direct result of his teachings.

Mr. and Mrs. Duggar, I believe that your family has a sincere desire to live your life for the glory of God, and that you desire the best possible upbringing for your children. However, I also know that the lifestyle you have chosen for your children is more dangerous to them than it is protective of them. I am aware that you list ATI as your homeschool affiliation on your public website. I also know that your family takes a prominent role in the annual homeschool seminars ATI hosts for its families. I appeal to you to reconsider your involvement with this group. Some may suggest that Gothard’s inappropriate behaviors over the past forty years which have been carefully documented on recoveringgrace.org are personal to Gothard, and should not be attributed to his teachings or to his followers, who include your family. I do believe that Gothard saw himself as above his own rules. However, I also believe that the authority structure that he designed for his followers created the opposite of its stated intention: the so-called protections designed for women and children which includes removing the right to say “no” to a person in authority has the effect of setting these same women and children up for abuse from within. I know; it happened to me. 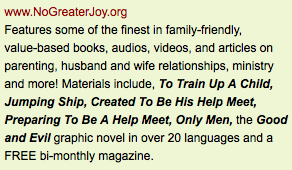 Not only do the Duggars promote Bill Gothard's organization, but they have endorsed Michael and Debi Pearls' books on their website, with To Train Up A Child heading the list.  Back in 2011 the Duggars did an Amazon Blitz, and the information on the left (preserved in a screen shot) is what they posted about No Greater Joy (the Pearls' ministry business).

Michael and Debi Pearl were thrilled about the Amazon Blitz that their 'friends' Jim Bob and Michelle were conducting, and they returned the favor by promoting the Duggars' latest book, A Love That Multiplies (featured at the top of this post), on their Facebook page (see the screenshot to the right).

It is apparent that there is much more going on with the Duggars than meets the eye and that their 'reality show' is just smoke and mirrors.  The next time the Duggars are heralded for their oh so wholesome lives (which has occurred in an SWBTS chapel, in a Liberty University convoction, and at the 2013 Art of Homemaking Conference held at SWBTS), just remember that they are immersed in the biblical patriarchy movement.