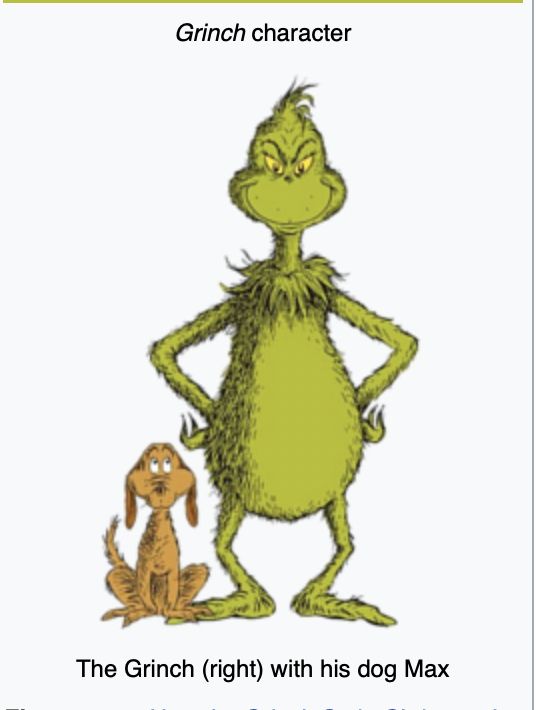 “And what happened, then? Well, in Whoville, they say – that the Grinch’s small heart grew three sizes that day. And then – the true meaning of Christmas came through, and the Grinch found the strength of ten Grinches, plus two!” –How the Grinch Stole Christmas!

I thought this would be an encouraging end to my posts on Mary and the birth of Jesus. My whole family, minus my frail mom, attended the lovely Christmas eve service at my Lutheran church. When we returned home, we couldn’t find Holly, whom we had adopted one year ago. Sadly, when we did find her, it appeared she had choked on something she found, had a seizure, and passed away. I was distraught. My Boston son-in-law let me cry on him while my husband and daughter made arrangements with the vet. Then, I called the rest of the family to alert them to be prepared for the next day. They all were coming to our house for our annual Christmas feast. One family member asked me if I wanted to cancel our gathering to recuperate. He is an avid dog lover like me. I said something like, “No, Christmas must continue.” Strangely, this quote from Dr. Seuss’s brilliant “How the Grinch Stole Christmas” came to mind, and I tried to quote it.

The next day, amid the bustle of cooking (my pierogis were awesome,) I kept trying to quote this to everyone. So finally, I looked it up and read it to everyone.

But the Spirit of Christmas wasn’t finished with me. I finally finished up the late EChurch@Wartburg. As I looked up some ancient Advent prayers, I came across this one by St Ephraim (aka spelled Ephrem), the Syrian who lived from 306-373 AD. The guy was a bit of a character, as outlined in this history on the Orthodox Church in America website.

Saint Ephraim, accounting himself as the least and worst of all, went to Egypt at the end of his life to see the efforts of the great ascetics. He was accepted there as a welcome guest and received great solace from conversing with them. On his return journey he visited at Caesarea in Cappadocia with Saint Basil the Great (January 1), who wanted to ordain him a priest, but he considered himself unworthy of the priesthood. At the insistence of Saint Basil, he consented only to be ordained as a deacon, in which rank he remained until his death. Later on, Saint Basil invited Saint Ephraim to accept a bishop’s throne, but the saint feigned madness in order to avoid this honor, humbly regarding himself as unworthy of it.

After his return to his own Edessa wilderness, Saint Ephraim hoped to spend the rest of his life in solitude, but divine Providence again summoned him to serve his neighbor. The inhabitants of Edessa were suffering from a devastating famine. By the influence of his word, the saint persuaded the wealthy to render aid to those in need. From the offerings of believers he built a poor-house for the poor and sick. Saint Ephraim then withdrew to a cave near Edessa, where he remained to the end of his days.

He is especially revered in Syriac Christianity, both in East Syriac tradition and West Syriac tradition, and also counted as a Venerable Father (i.e., a sainted Monk) in the Eastern Orthodox Church. He was declared a Doctor of the Church in the Roman Catholic Church in 1920. Ephrem is also credited as the founder of the School of Nisibis, which, in later centuries, was the centre of learning of the Church of the East.

Ephrem wrote a wide variety of hymns, poems, and sermons in verse, as well as prose exegesis. These were works of practical theology for the edification of the Church in troubled times. So popular were his works, that, for centuries after his death, Christian authors wrote hundreds of pseudepigraphal works in his name. He has been called the most significant of all of the fathers of the Syriac-speaking church tradition.[4] In Syriac Christian tradition, he is considered patron of the Syriac people.[1]

Remember that Ephraim wrote to @1800 years ago as you read this prayer. His predictive prowess is seen in the first part of the prayer. I liked this so much that after I posted it in EChurch, I sent it to my family.

The feast day of your birth resembles You, Lord Because it brings joy to all humanity.
Old people and infants alike enjoy your day. Your day is celebrated from generation to generation.
Kings and emperors may pass away, And the festivals to commemorate them soon lapse.
But your festival will be remembered until the end of time.
Your day is a means and a pledge of peace. At Your birth heaven and earth were reconciled,
Since you came from heaven to earth on that day You forgave our sins and wiped away our guilt.
You gave us so many gifts on the day of your birth: A treasure chest of spiritual medicines for the sick;
Spiritual light for the blind; The cup of salvation for the thirsty; The bread of life for the hungry.
In the winter when trees are bare, You give us the most succulent spiritual fruit.
In the frost when the earth is barren, You bring new hope to our souls.
In December when seeds are hidden in the soil, The staff of life springs forth from the virgin womb.

So we celebrated and enjoyed the day. Yes, there was a bit of sadness, but we remembered that a Savior was born who conquered the grave. And, yes, I believe that all dogs go to heaven. 🙂