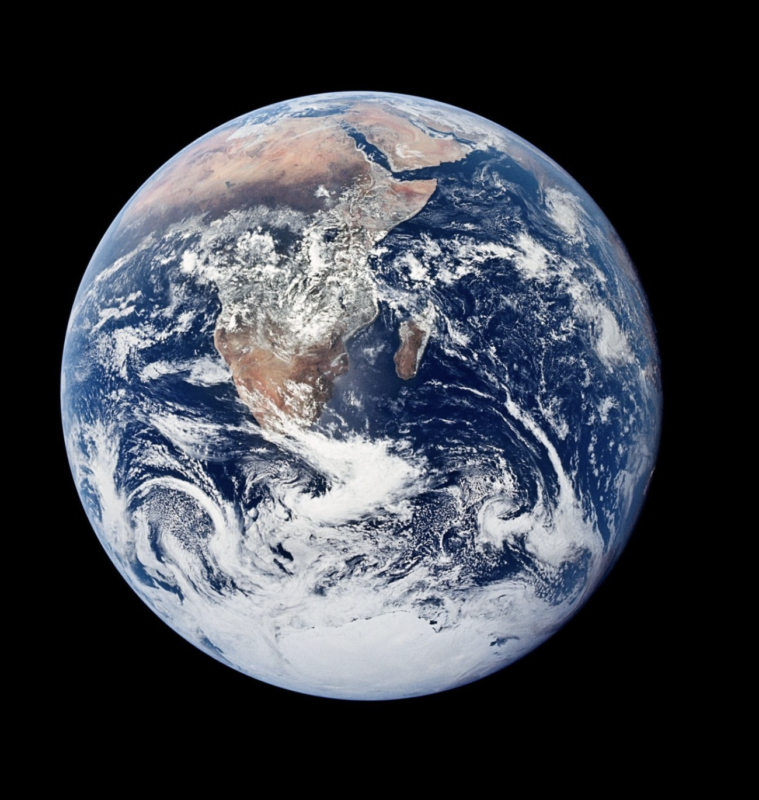 On Dec. 7, 1972—50 years ago today—the crew of Apollo 17 took this photo of Earth as they journeyed to the Moon. Known today as the “Blue Marble”, this picture has since become one of the most iconic images of our home world. NASA

“[Mary is the] highest woman and the noblest gem in Christianity after Christ… She is nobility, wisdom, and holiness personified. We can never honor her enough. Still, honor and praise must be given to her in such a way as to injure neither Christ nor the Scriptures.” Martin Luther

I will post my annual Christmas in Ouray thoughts on Friday and try to get EChurch up early.

Wikipedia, that well-known book of theology,  states that:

Mary is discussed in the events surrounding the birth of Jesus. Mary is mentioned in bringing Jesus to be circumcised. Then, in Matthew 2:13-15, Joseph, Mary, and Jesus flee to Egypt to live until Herod dies. (Matthew 2:13-15.)

On the third day a wedding took place at Cana in Galilee. Jesus’ mother was there, 2 and Jesus and his disciples had also been invited to the wedding. 3 When the wine was gone, Jesus’ mother said to him, “They have no more wine.”

5 His mother said to the servants, “Do whatever he tells you.”

6 Nearby stood six stone water jars, the kind used by the Jews for ceremonial washing, each holding from twenty to thirty gallons.[b]

7 Jesus said to the servants, “Fill the jars with water”; so they filled them to the brim.

8 Then he told them, “Now draw some out and take it to the master of the banquet.”

They did so, 9 and the master of the banquet tasted the water that had been turned into wine.He did not realize where it had come from, though the servants who had drawn the water knew. Then he called the bridegroom aside 10 and said, “Everyone brings out the choice wine first and then the cheaper wine after the guests have had too much to drink; but you have saved the best till now.”

11 What Jesus did here in Cana of Galilee was the first of the signs through which he revealed his glory; and his disciples believed in him.

12 After this he went down to Capernaum with his mother and brothers and his disciples. There they stayed for a few days.

Mary and the brothers of Jesus are used as proof that Jesus was a nobody.

A Prophet Without Honor

53 When Jesus had finished these parables, he moved on from there. 54 Coming to his hometown, he began teaching the people in their synagogue, and they were amazed. “Where did this man get this wisdom and these miraculous powers?” they asked. 55 “Isn’t this the carpenter’s son? Isn’t his mother’s name Mary, and aren’t his brothers James, Joseph, Simon and Judas? 56 Aren’t all his sisters with us? Where then did this man get all these things?”57 And they took offense at him.

But Jesus said to them, “A prophet is not without honor except in his own town and in his own home.”

58 And he did not do many miracles there because of their lack of faith.

Jesus was miffed at them and did not do many miracles due to their lack of faith. I wonder how Mary felt about the disdain of the crowd.

And Jesus was offended by the crowd because he wasn’t going for the adulation of the celebrity crowd.

Jesus left there and went to his hometown, accompanied by his disciples.2 When the Sabbath came, he began to teach in the synagogue, and many who heard him were amazed.

“Where did this man get these things?” they asked. “What’s this wisdom that has been given him? What are these remarkable miracles he is performing? 3 Isn’t this the carpenter? Isn’t this Mary’s son and the brother of James, Joseph,[a] Judas and Simon? Aren’t his sisters here with us?” And they took offense at him.

4 Jesus said to them, “A prophet is not without honor except in his own town, among his relatives and in his own home.” 5 He could not do any miracles there, except lay his hands on a few sick people and heal them. 6

It appears the crowd was looking for a celebrity family who should have been the ones to have the Messiah. Many evangelicals today would sadly agree with them. “Let’s make Jesus a celebrity!” Jesus was offended by their judgment of Mary and his brothers and sisters. It so affected him that He” could not” do any miracles except for a few small ones. Jesus was protective of His mother and family. I bet He comforted Mary.

A confusing episode that involved Mary

20 Then Jesus entered a house, and again a crowd gathered,so that he and his disciples were not even able to eat.21 When his family[b] heard about this, they went to take charge of him, for they said, “He is out of his mind.”

22 And the teachers of the law who came down from Jerusalem said, “He is possessed by Beelzebul! By the prince of demons he is driving out demons.”

23 So Jesus called them over to him and began to speak to them in parables: “How can Satandrive out Satan? 24 If a kingdom is divided against itself, that kingdom cannot stand. 25 If a house is divided against itself, that house cannot stand. 26 And if Satan opposes himself and is divided, he cannot stand; his end has come. 27 In fact, no one can enter a strong man’s house without first tying him up. Then he can plunder the strong man’s house. 28 Truly I tell you, people can be forgiven all their sins and every slander they utter, 29 but whoever blasphemes against the Holy Spirit will never be forgiven; they are guilty of an eternal sin.”

30 He said this because they were saying, “He has an impure spirit.”

34 Then he looked at those seated in a circle around him and said, “Here are my mother and my brothers! 35 Whoever does God’s will is my brother and sister and mother.”

48 He replied to him, “Who is my mother, and who are my brothers?” 49 Pointing to his disciples, he said, “Here are my mother and my brothers. 50 For whoever does the will of my Father in heaven is my brother and sister and mother.”

Did Mary really think her son was crazy, or was it something else?

At this point, the teachers of the law were saying Jesus was demon-possessed, which meant things were not going well, an understatement.  Perhaps Mary was trying to prevent Jesus from being arrested. Did she fear for His life? It is possible that some of her family were questioning what Jesus was doing, and she was trying to keep the peace. Jesus was moving away from his primary family and pointing out that all who followed the Father’s will were now his family. I wonder how Mary felt at this point. Was she beginning to comprehend how Jesus was changing the face of the faith?

She was somewhat challenged to begin to think about Jesus differently. Was she beginning to wonder about Simeon’s prophecy of the pain she would face?

Mary, John, and Jesus on the Cross

Near the crossof Jesus stood his mother,his mother’s sister, Mary the wife of Clopas, and Mary Magdalene. 26 When Jesus saw his mother there, and the disciple whom he lovedstanding nearby, he said to her, “Woman,[b] here is your son,” 27 and to the disciple, “Here is your mother.” From that time on, this disciple took her into his home.

Mary was in the upper room with the disciples and Jesus’ brothers after the ascension of Jesus.

Then the apostles returned to Jerusalem from the hill called the Mount of Olives, a Sabbath day’s walk[c] from the city.13 When they arrived, they went upstairs to the room where they were staying. Those present were Peter, John, James and Andrew; Philip and Thomas, Bartholomew and Matthew; James son of Alphaeus and Simon the Zealot, and Judas son of James. 14 They all joined together constantly in prayer, along with the women and Mary the mother of Jesus, and with his brothers.

At this point, Jesus had appeared to the disciples and His brother, James, who had become a believer. So did Mary decide to live with him? It is believed that he died as a martyr sometime around 60 AD. Maybe Jesus was telling her to stay with John, knowing that James’ martyrdom would occur.

One thing is certain. Mary lived a quiet life and never told us if Jesus ever turned Matzoh into ice cream. Mary spent some time with the disciples, and it is reasonable to imagine that she, along with John the Beloved and James, the brother of Jesus, discussed what happened in depth. I would imagine that she became the expert on what it was like to have the living presence of Jesus inside her for nine months. Then, she lived with him as He grew up. Imagine what she learned from Him and how she felt about His presence with her.

I believe Mary should take her place at the head of the class of disciples. As such, she should be remembered for more than just being a willing womb. God chose her to raise Jesus. Therefore, it is reasonable to assume that she was a leader among men and women. After all, the disciples seemed to enjoy her being around while waiting for the Spirit.

I believe that complementarian churches should (but won’t)  allow a woman in the pulpit to discuss Mary’s Magnificat or to discuss how Mary had a perspective that men do not have.  She experienced the incredibly real and physical presence of the body of Jesus. Wow!