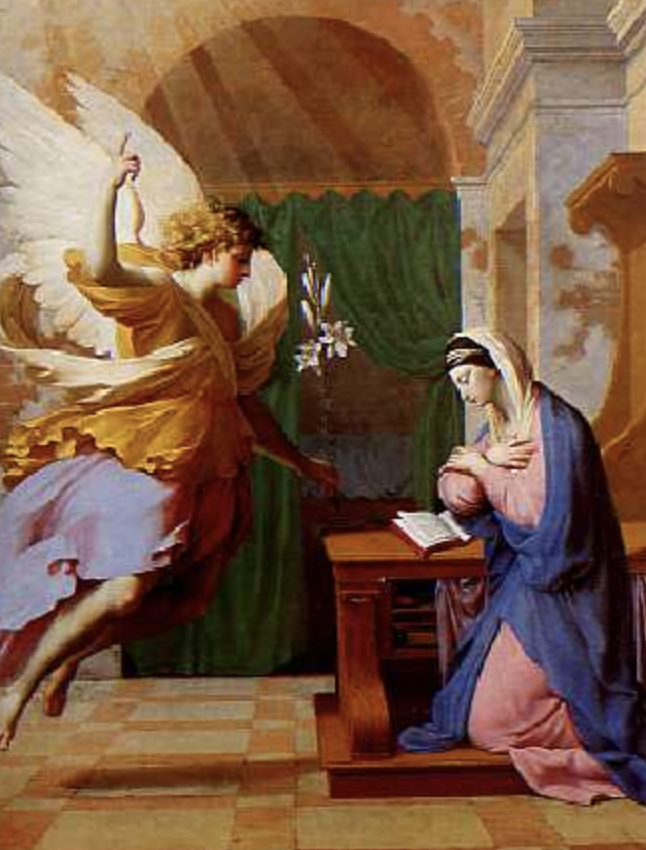 The Annunciation by Eustache Le Sueur,

“The noblest pleasure is the joy of understanding.”  Leonardo da Vinci

I have often joked with my husband that my goal is to avoid being mentioned by name in any future creed. I am thinking about Pontius Pilate, who is remembered whenever any Christian, anywhere, repeats the Apostles’ Creed.

I believe in God, the Father Almighty, maker of heaven and earth.

And in Jesus Christ, His only Son, our Lord, who was conceived by the Holy Spirit, born of the virgin Mary, suffered under Pontius Pilate, was crucified, died and was buried. He descended into hell.

The third day He rose again from the dead. He ascended into heaven and sits at the right hand of God the Father Almighty. From thence He will come to judge the living and the dead.

I believe in the Holy Spirit, the holy Christian Church, the communion of saints, the forgiveness of sins, the resurrection of the body, and life everlasting. Amen

Many Eastern churches celebrate Pilate and his wife as saints who converted to Christianity. If true, I wonder how he might feel about his sin being remembered repeatedly by millions of people until Jesus returns.

The Virgin mother who had a name: Mary

My Lutheran church repeats the Apostles’ or Nicene Creed each week. I have been contemplating Mary for the last week, and her name jumped out at me in the Creed: “born of the Virgin Mary.” There are only two names in the Creed” Pontius Pilate and Mary. The Old Testament prophecy in Isaiah 7:14 prophesied that A Virgin would conceive and bear a Son who was to be called Immanuel.

The Apostles’ Creed put a name to that virgin so that everyone would not only remember that she was a virgin, a nameless, pristine womb but a young Jewish woman, probably around 14-15, with a name. The writers of the Creed decided that everybody needed to remember her name and to repeat it regularly as they repeated the Creed.

Interestingly, these creeds didn’t mention the names of the disciples, not even Paul, who had quite a conversion experience and would go on to write most of the epistles. No prophecies in the Old Testament prophesied the rise of Calvinism, and indeed, no creeds which are repeated regularly mention John Calvin or John Piper. Mary is remembered.

The Creed didn’t call her “Joseph’s wife who was a virgin until the birth of Jesus.” Nope. They wanted us to know her name, “Mary.” A simple, beautiful name of a beautiful and significant woman. Yet, mention her name and ask why we don’t feature her more often, and one might get an answer like:

“You know those Catholics who made up lots of stuff about her means we good Proestants need to avoid going down that path.”

I had a Catholic friend who told me that we “evangelicals” would understand women better if we paid more attention to Mary. I didn’t fully understand him then, but I think he had a point I missed. Mary is important, and some of us think about her in passing. I am pointing fingers at myself and many pastors I have known.

Mary was the first to experience the indwelling presence of Jesus.

As a Lutheran, I believe in the real presence of Jesus in communion. All Christians speak of Jesus being “alive in me.” Those of us who have experienced the miracle of pregnancy can talk about the profound nature of a child growing inside and the tremendous pain and overwhelming joy of childbirth. I wonder how even more profound it was for Mary, who had Jesus alive and present in her.

I began to think about the genuine danger of childbirth in Mary’s day. However, Mary was given a promise by the angel who visited her. Luke 1:26-38 NIV:

The virgin’s name was Mary. 28 The angel went to her and said, “Greetings, you who are highly favored! The Lord is with you.”

29 Mary was greatly troubled at his words and wondered what kind of greeting this might be.30 But the angel said to her, “Do not be afraid, Mary; you have found favor with God. 31 You will conceive and give birth to a son, and you are to call him Jesus. 32 He will be great and will be called the Son of the Most High. The Lord God will give him the throne of his father David,33 and he will reign over Jacob’s descendants forever; his kingdom will never end.”

35 The angel answered, “The Holy Spirit will come on you, and the power of the Most High will overshadow you. So the holy one to be born will be called[a] the Son of God. 36 Even Elizabeth your relative is going to have a child in her old age, and she who was said to be unable to conceive is in her sixth month. 37 For no word from God will ever fail.”

38 “I am the Lord’s servant,” Mary answered. “May your word to me be fulfilled.” Then the angel left her.

Mary and Simeon: Another encouragement and a hint of pain to come.

When the time came for the purification rites required by the Law of Moses, Joseph and Mary took him to Jerusalem to present him to the Lord 23 (as it is written in the Law of the Lord, “Every firstborn male is to be consecrated to the Lord”[a]), 24 and to offer a sacrifice in keeping with what is said in the Law of the Lord: “a pair of doves or two young pigeons.”[b]25 Now there was a man in Jerusalem called Simeon, who was righteous and devout. He was waiting for the consolation of Israel, and the Holy Spirit was on him. 26 It had been revealed to him by the Holy Spirit that he would not die before he had seen the Lord’s Messiah. 27 Moved by the Spirit, he went into the temple courts. When the parents brought in the child Jesus to do for him what the custom of the Law required, 28 Simeon took him in his arms and praised God, saying:

29 “Sovereign Lord, as you have promised,
you may now dismiss[c] your servant in peace.
30 For my eyes have seen your salvation,
31     which you have prepared in the sight of all nations:
32 a light for revelation to the Gentiles,
and the glory of your people Israel.”

33 The child’s father and mother marveled at what was said about him. 34 Then Simeon blessed them and said to Mary, his mother: “This child is destined to cause the falling and rising of many in Israel, and to be a sign that will be spoken against, 35 so that the thoughts of many hearts will be revealed. And a sword will pierce your own soul too.”

36 There was also a prophet, Anna, the daughter of Penuel, of the tribe of Asher. She was very old; she had lived with her husband seven years after her marriage, 37 and then was a widow until she was eighty-four.[d] She never left the temple but worshiped night and day, fasting and praying. 38 Coming up to them at that very moment, she gave thanks to God and spoke about the child to all who were looking forward to the redemption of Jerusalem.

39 When Joseph and Mary had done everything required by the Law of the Lord, they returned to Galilee to their own town of Nazareth. 40 And the child grew and became strong; he was filled with wisdom, and the grace of God was on him.

Mary kept silent about what living with Jesus was like. We know she must have learned a lot from him due to this experience when he was 12.

41 Every year Jesus’ parents went to Jerusalem for the Festival of the Passover. 42 When he was twelve years old, they went up to the festival, according to the custom. 43 After the festival was over, while his parents were returning home, the boy Jesus stayed behind in Jerusalem, but they were unaware of it. 44 Thinking he was in their company, they traveled on for a day. Then they began looking for him among their relatives and friends. 45 When they did not find him, they went back to Jerusalem to look for him. 46 After three days they found him in the temple courts, sitting among the teachers, listening to them and asking them questions.47 Everyone who heard him was amazed at his understanding and his answers. 48 When his parents saw him, they were astonished. His mother said to him, “Son, why have you treated us like this? Your father and I have been anxiously searching for you.”

49 “Why were you searching for me?” he asked. “Didn’t you know I had to be in my Father’s house?”[a] 50 But they did not understand what he was saying to them.

51 Then he went down to Nazareth with them and was obedient to them. But his mother treasured all these things in her heart. 52 And Jesus grew in wisdom and stature, and in favor with God and man.

I remember when a good friend left her son at Chuck E Cheese. Thankfully, I was still there when she called me, crying, and I brought him home. Mary got a bit of a surprise when she “misplaced” Jesus.

There is more to write, and I may do so this week. At this point, I have some questions for Mary.

A question for all: Would today’s complementarians have a problem with a woman coming to the pulpit to speak the words of the Magnificat?

Rich Mullins had some questions for Jesus. Sort of like my questions for Mary. I thought it would make an interesting ending to this post.