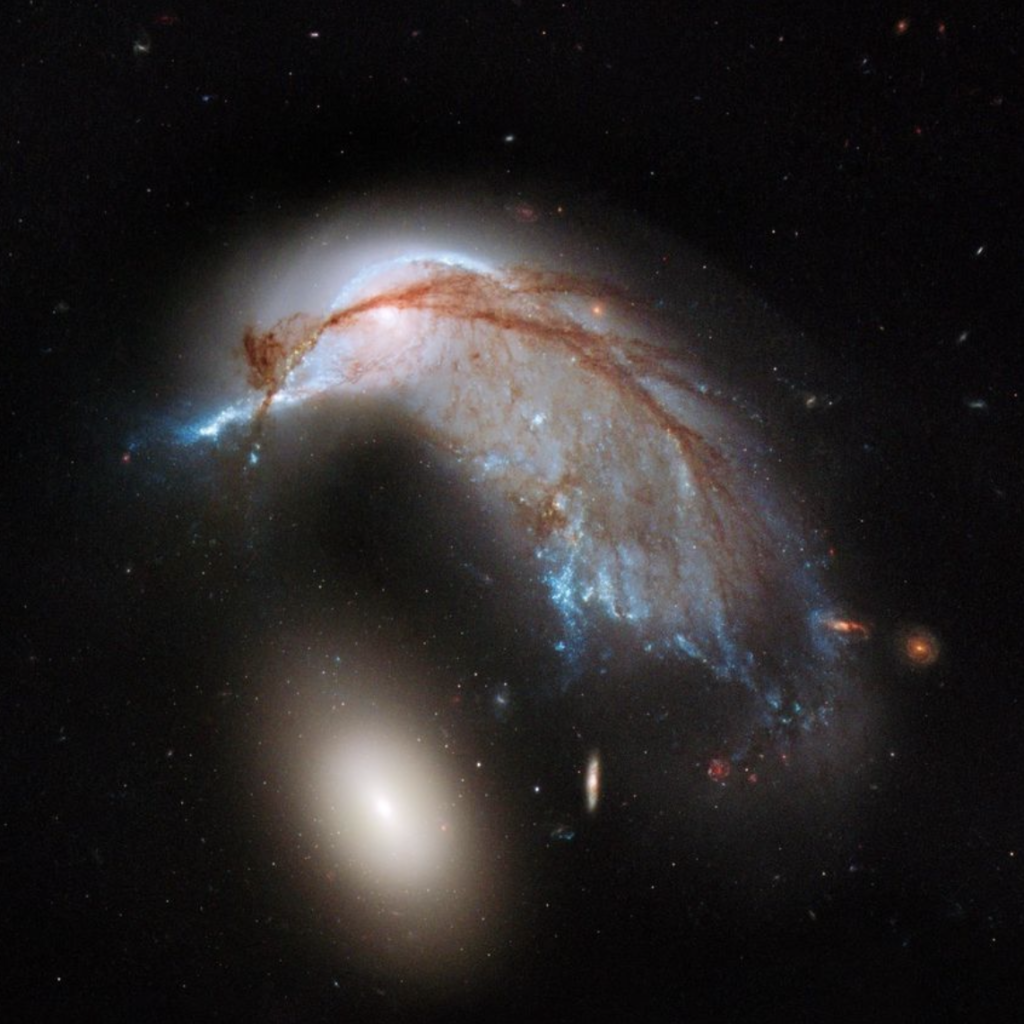 Galaxy duo Arp 142 resembles a penguin with their egg! NASA/Hubble

Why do I post these pictures of the universe? Because even in the darkness of what I write about, there is still beauty and the evidence of an infinitely grand and beautiful Creator. It is to point back to something extraordinary amid this sadness in the church.

As I started this post, it felt like I’d been writing about the ARC for a long time. My first post was in 2013, and, lo and behold, it mentioned Stovall Weems, the topic of today’s post. It was Dino Rizzo, Stovall Weems, and Steven Furtick: Banking on the ARC?.

If you choose to read that, you will learn that Stovall Weems was a member of Steven Furticks’ Board of Elders, but since he didn’t live in Charlotte, he served “in absentia.” You would also find out that Weems was a member of the ARC’s Board of Overseers. The ARC link no longer works so I guess they are pretending he’s out. Below I discussed his former home. Remember what an $800,000 home was like nine years ago? I also made the following observation since it appeared to me that these ARC boys live high on the hog.

Furtick made quite sure that the pastors who would approve his salary are pastors like him. That is, he wants high living pastors who are making bank on their affiliation as lead pastors in churches. For example, another committee member, Stovall Weems, lives quite well in the Jacksonville area in a house assessed at over $800,000. Here is a link to the City of Jacksonville’s Property Appraiser’s Office. Check for the listing under Charles S Weems IV.

So why is Dee going back to the past? I wanted to point out that Weems lived very well on the ARC dime. He probably got some extra dinero from serving as an “Overseer” (his term, not mine) of Steven Furtick who, in case you haven’t heard, had the most expensive home in North Carolina-even beating out former Senator John Edwards and the CEO of SAS. Good job as overseer, Weems.

PS I don’t believe he is really gone from the ARC. The ARC stops talking when they have an “episode.” I would wager to guess he is still helping run things, but I hope I’m wrong.

Stovall Weems started and built Celebration Church and then got into a heap of trouble.

In August 2011, a ceremony was held for its new location, a 7,000 square foot facility on 30 acres near 9A and Baymeadows Road. The $15 million building project will feature 3,000 seats in the arena-style sanctuary, and broadcasting and audio visual capabilities.

It appeared to bring in the bucks.

There is little question that Celebration Church was connected with the  ARC since Weems started it in 1998 and was on the Board of Overseers of the ARC in 2013.

Stovall Weems is accused of embezzlement, emotional abuse, and narcissism.

Things went south in 2018, but  Dee imagines that things were problematic even before then. Did I ever tell you the one about the ARC, Prayer Force, and the belief that demons are present in places where there are no flowers?

So what happened at the Celebration? Do you mean besides some lousy theology, living extremely well, etc.? Well, sort of that and more.

Dee shakes off her yawn. These ARC boys sure know how to get into a heap of trouble, and this present brouhaha is no surprise to me. According to I-TEAM: Celebration Church releases findings of explosive investigation into founding pastor.

Things got so bad that the board of trustees hired an outside law firm to do an investigation. This report was explosive. Here is a link to the complete research. Special thanks to a friend on Twitter.

The following will be some of the findings of this report.

According to I-Team: it supposedly all started with Weems’ supposed encounter with “Jesus” in 2018.

The church said things changed following a Seder service on Passover in 2018, where Stovall Weems said he had a personal encounter with Jesus Christ.

“Witnesses to the events at the Weems residence in the days following the Encounter describe Weems as visibly shaking and sobbing. They also confirmed that Kerri Weems was distraught and overwhelmed by her husband’s behavior,” said the report. “Kerri Weems has a history of clinical depression, a topic which she openly discussed. People close with Kerri Weems stated that she expressed being suicidal as a result of the Encounter and Weems’ behavior following it. Despite repeated requests by many, the Weemses refused to take any meaningful time off after the Encounter to process the event.”

During the service, which The Christian Post previously reported, Weems told his congregation that he met Jesus Christ on Good Friday and was surprised by His personality.

“The first thing that I was taken back with is like Jesus’ personality. This is how Jesus was when He was on the earth. I heard His voice … the cadence of His voice. I can sense His mood. I can sense His presence, like He has a personality,” Weems said at the time. “I can’t describe the closeness that I felt with Jesus. He didn’t look at me. I never saw the front of his face. He was wearing a white garment. He had brown hair.”

The report said over time, Weems used the encounter to justify his authority and maintain control of the church.

“If questioned, Weems would respond by saying that this direction was given to him by God through the Encounter,” said the investigative report.

The report said for months following the 2018 encounter, Weems struggled to form words or communicate effectively. It said he disengaged in business meetings with staff and cried frequently. The report said Weems began making strange comments about sweeping changes he intended for the church’s ministry.

My thoughts on this: Had not all of this other bad stuff happened, the church members would probably have blown off this “encounter” of Weems. I believe this pronouncement of an “encounter” fits within the lightweight theology seen in and around the ARC, which I’ve written about from time to time.

Weems is accused of narcissism.

“The single word used most frequently to describe Stovall Weems was ‘narcissist.’ Nearly every witness we interviewed used that specific word,” states the 22-page report produced by the Nelson Mullins law firm.

…One employee cited in the report alleged that Weems once made them drive to a liquor store to get a bottle of bourbon for his house late at night because he “did not want to be seen purchasing liquor.” Another employee claimed Weems had them buy a car and deliver it to his house, but never offered the employee transportation back to their own home.

“After the employee delivered the car as demanded, Weems told him to find his own ride home,” the report states.

Weems of accused of fraud- Is prison in the future?

According to ‘Looks like a classic fraud,’ former prosecutor says of Celebration Church report

“I think given what we read here, assuming it’s accurate, it would seem to be a foregone conclusion that the pastor is going to face criminal charges,” Fallgatter said.

The report found Weems used the church to enrich himself and broke church bylaws by making major financial decisions without the board’s approval.

The report says Weems bought a home on the Nassau River and sold it four months later to the church for a $430,000 profit and pocketed the money without board approval. The report calls it embezzlement.

The Weemses allegedly reveled in the comfort of private charter flights to exotic locations, a full “house staff” and personal assistants to respond to their exacting demands. The report claims that the “Weemses’ compensation, staff, travel and expense accounts comprised approximately 10% of the Church’s total revenue.”

“Despite these privileges, the Weemses treated people who attended to them as inferior,” the report says. “In 2020, Weems drafted a document that instructed the Weemses’ assistants on how they were to keep each of the three residences so the Weemses would not be bothered during their transitions between homes. This was so the Weemses could focus on their ‘spiritual acuity’ at all times.”

Is the church insolvent? Will criminal charges be pursued?

The report said the Jacksonville minister, who was suspended by the megachurch’s trustees in January, “brought Celebration to the brink of insolvency” while coloring his leadership with arrogance, entitlement, greed and other character flaws. It said Weems also failed to follow the fiduciary duties a senior pastor like him owes to his church.

…A statement posted on the church’s website said the report’s findings would be forwarded to authorities to decide whether to file criminal charges, one of a series of steps the lawyers recommended and the trustees approved.

So what’s going on with the Weems and Celebration Church?

Please read the entire statement by the church. It’s a doozy. Kudos to those members who did the right thing.

Weems claims he is suing the church-the church he started. This move speaks to his heart. It appears he thought the church belonged to him. He is now facing possible criminal charges. I bet this isn’t the last post we’ll write about Weems.

None of this surprises me in the least.