Judge McGann didn’t buy what the former minister was preaching either, saying: “You can’t even bring your despicable self to admit your crime.  So, you hide behind your phony self-diagnosis of amnesia.  Mr. Morales, you are one pathetic human being.
August 14, 2014

“I am pleading guilty because I am guilty”.  In Nate’s statement he accepted responsibility “for destroying the lives of all those other victims”.
February 28, 2022

The following comment was published on February 22, 2022 by Jeremy Cook. Jeremy was sexually abused by Nathaniel Morales when he was a teenage boy and he was one of three survivors who testified at the first trial of Nathaniel Morales.

I spoke with Jeremy yesterday and obtained his permission to reprint his comment in this article. I wanted to do so because his comment was submitted several days after the article was published therefore many readers likely did not see it. Here is Jeremy’s comment:

MCCA was presented with the truth about what their employee did to their students.

MCCA chose to not report the crimes, took no action to stop Nate, and ultimately chose to protect themselves instead of their students.

Thurlow Switzer was presented with the truth about what his employee did to the students at his school.

Thurlow Switzer chose to not report the crimes, took no action to stop Nate, and ultimately chose to protect himself and his church, instead of his students.

Covenant Life Church chose to not report the crimes, took ineffective and laughable actions to stop Nate, and ultimately chose to protect the church, instead of their members and the children under their care.

Robin Boisvert, Grant Layman, Chris Glass chose to not report the crimes, took ineffective and laughable actions to stop Nate, and ultimately chose to protect themselves and church, instead of their members and the children under their care.

IANAL, but there is more than sufficient evidence that multiple people and institutions failed to follow the law. Mandatory reporting exists, and a quick check makes clear that at the very least, by 1993 Maryland had mandatory reporting requirements for sexual abuse. Reports were given to CLC Pastors in and after 1993, and not as requests for counsel, which could trigger a Church privilege… but in request for action and for Nate to be stopped. CLC and the Pastors involved did not report.

So many people in authority failed so many of us. Our parents believed the CLC Pastors when they said that “they would handle it”, and that we didn’t need to do anything else. Some of the parents were directed by Robin/Grant/Chris to NOT report to the police.

Nate was truly a wolf in sheep’s’ clothing. He was a masterful liar, and spun a tale of ‘wanting to help be a Godly example to young boys on how to become Godly men’. He knew all the right lines to say to be accepted into church after church, and youth group after youth group. The same lies he told were blindly accepted, without question, by church and school leader after leader, “because he is a Christian”. Blind acceptance, in spite of warning signs. So many failures…

I still bear the scars of Nate’s abuse, and I will for the rest of my life. Thankfully I had my day in court against him. But I have yet to see any justice for the myriad of so-called “leaders” who put me in harm’s way, and then failed to take action when they learned of what happened. I hold many of them just as guilty, as they allowed Nate to continue to abuse, again and again, ruining life after life.

Forgive my ramblings. I spoke out after the trial, and then I thought I could move on with my life. But now, with these things happening again, I feel I must speak out again.

You may recall in my previous article, published on February 16, 2022 that were based on the court records, I was under the impression there was going to be a new trial for Nathaniel Morales which was to begin today (2-28-2022). Jeremy Cook told me this wasn’t correct. I went back to the court records and here is screenshot taken last Friday. 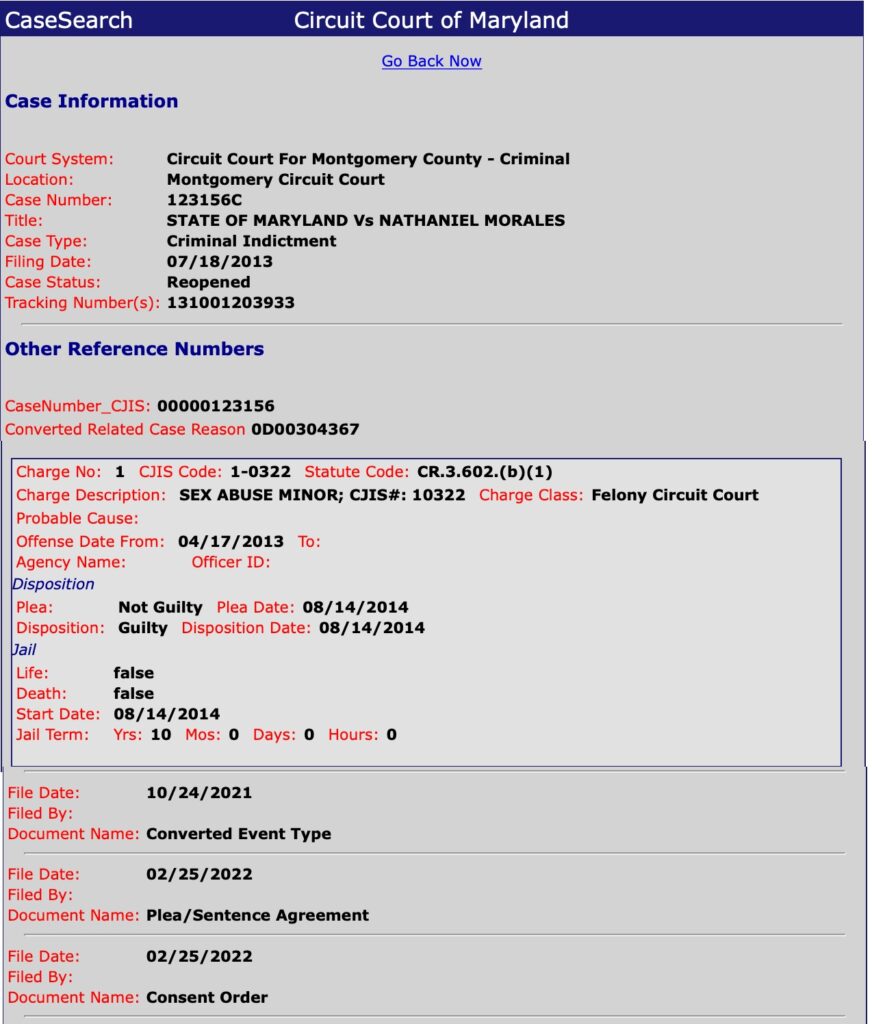 You will notice on February 25, 2022 there was a “Plea/Sentence Agreement.” Jeremy told me there was to be a hearing this morning, February 28, 2022 in which the Judge would formally accept the Plea and pronounce the sentence for Morales. 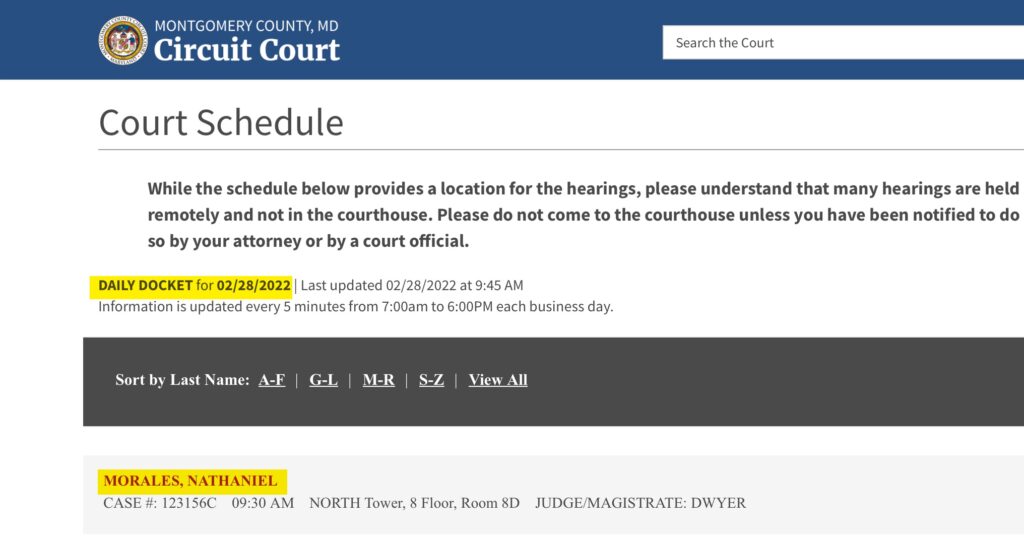 At this point, let me quote what Jeremy emailed me concerning the Hearing this morning. This should clarify things:

This means that on date October 15, 2022 the sentence in 121356-C will be completed. On that same date, the defendant will have served 50% of the sentence in case 121884-C, at which point, by Maryland law, defendant is eligible for parole.

I did have a moment to speak to the court, and while unable to stop this plea agreement, was able to inform the court and Nate that I will be speaking out against him at any and every Parole hearing.

Short version on this plea: Because the victim “DT” was not willing to go through another trial, and the original conviction was vacated (effectively for poor representation by his laywer), this was the best agreement that was possible. But, one very important thing did happen in this case. Nate admitted that he was guilty of sex abuse. “I am pleading guilty because I am guilty”.  In Nate’s statement he accepted responsibility “for destroying the lives of all those other victims”.  But, we all know how good of an actor Nate is, and he is starting to make all the right sounds and say the right things that a parole board would want to hear.

I find this very frustrating, but in talking with Jeremy I was somewhat pacified. A defendant is entitled to a fair trial, and this includes the right to be represented by a competent lawyer. In Morales’ case he could not afford a lawyer so he had a State appointed lawyer to represent him. This lawyer screwed up, evidently quite badly, so the Judge vacated the 10 year sentence for the sexual abuse of DT.  The case would have been retried, and I have no doubt Morales would have been convicted again, but DT did not want to go through another trial. Without DT’s testimony the case would have been hard to get a conviction on. I totally understand DT  not wanting to endure another trial.  I have attended two trials of Thomas Chantry and have seen firsthand how tough it is on the victims. What I have issue with is I don’t see where the State got a thing out of this Plea. Sentencing Morales to 10 years, to run concurrently with the other sentence effectively is a conviction for sexual abuse with no penalty for the crime!

Now I want to run through the Pastors, all from Covenant Life Church, who failed to report the crimes of sexual abuse to Law Enforcement, thereby enabling Nathaniel Morales to abuse more young boys. How many? Only Morales and God know.  We should never forget these hirelings.

What follows was taken from Brent Detwiler’s blog. He attended the trials in 2013.

“The first witness called to stand was Samuel’s and Daniel’s mother, Grace Charlene Bates.  Of greatest importance, she testified they went to Grant Layman in 1992 and told him about the sexual abuse of Samuel.  This fact was not disputed by the Defense.  Grant was a pastor at Covenant Life Church.  C.J. Mahaney was the senior pastor.” 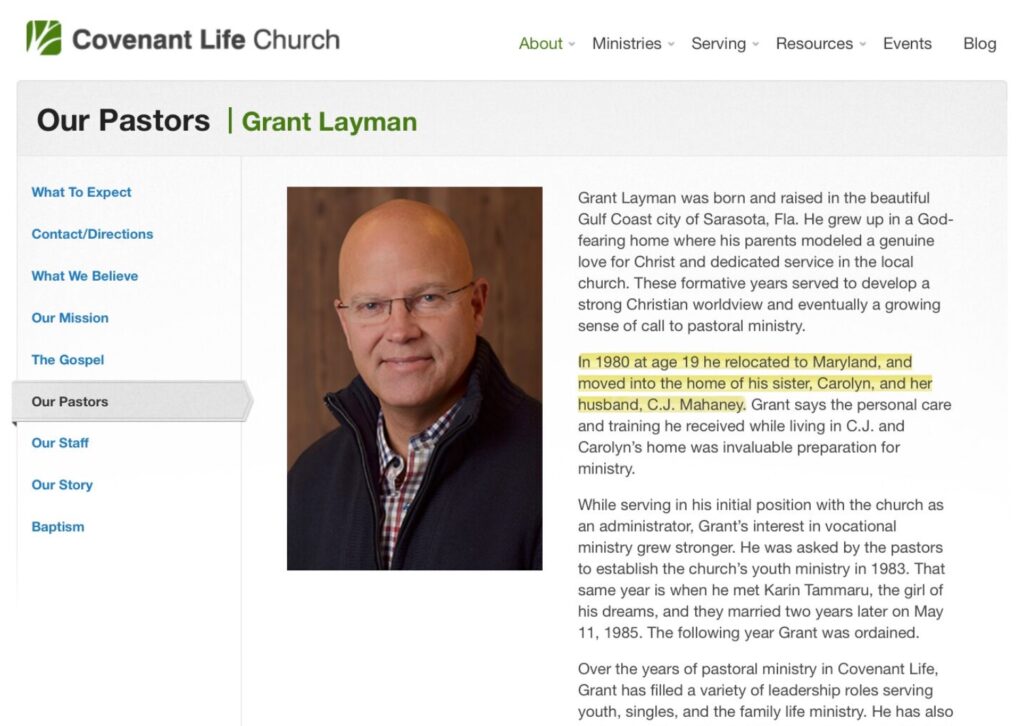 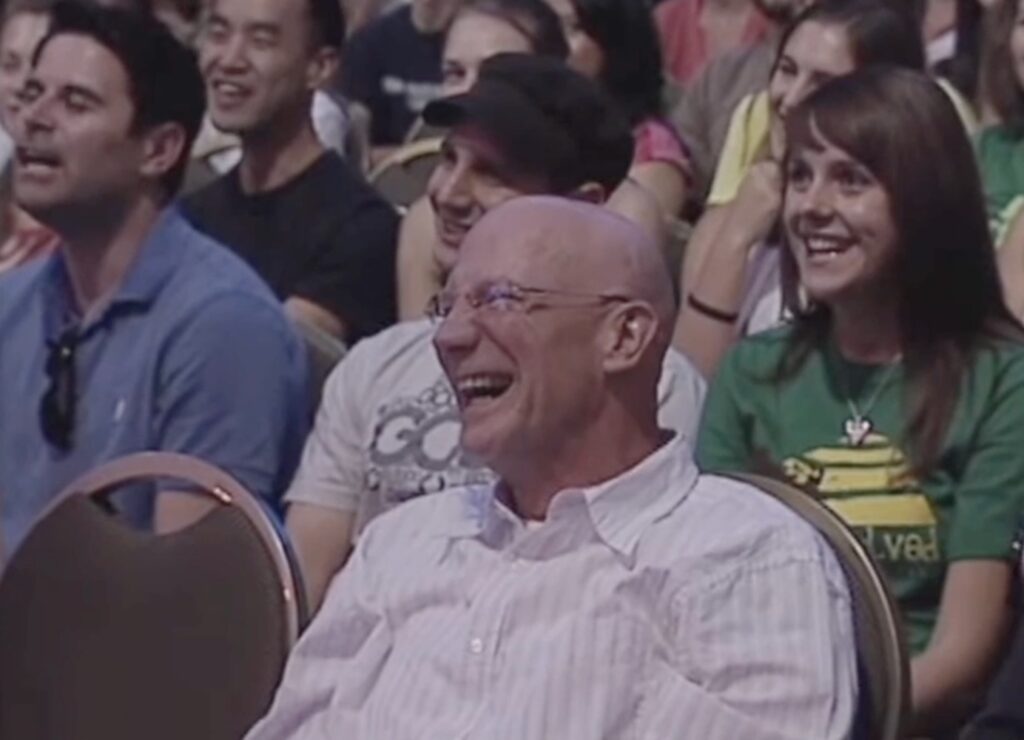 “Grant Layman was sworn in next.  Under oath he told the jury he did not report the crimes told him by Scott and Charlene Bates in 1992 that were committed by Morales against their son, Samuel Bates.  He also stated that within one year, he learned of the sexual abuse of Brian Wolohan and did not report it to the police either.”

Under cross examination by Morales’ lawyer, Alan Drew (which was surprising), he was asked “Did you have a responsibility to report” the crimes committed against Samuel Bates and Brian Wolohan.  To this Layman said, “I believe so.”  Drew responded, “Did you report” to police?  Layman answered, “I didn’t do it.”

It should also be added that Scott Bates, the father of Samuel and Daniel Bates, contacted the Covenant Life pastoral team again in 2007 when he learned that Morales was a pastor in Las Vegas, NV.  The entire pastoral team talked about how to handle the situation with Morales.  Layman was given the assignment to contact Morales.  Layman talk to Morales by phone.  During this conversation Morales admitted to the sexual abuse of boys but claimed he couldn’t remember the details.  None of the pastors at Covenant Life Church reported this confession of sex abuse to the police.  They knew Morales was a serial and predatory sex abuser.

I’ve been writing about the conspiracy to cover up sex abuse in Covenant Life Church and Sovereign Grace Ministries by C.J. Mahaney, Joshua Harris, Grant Layman and many other leaders.  There is now NO QUESTION this has occurred.  These men knew about Samuel Bates, Brian Wolohan, and Jeremy Cook.  Never once did they report these crimes to the police.  In each case, they “covered up … the heinous crimes” in the words of Assistant State’s Attorney Jessica Hall.
Source

C.J. Mahaney, John Loftness, Gary Ricucci, Grant Layman and other pastors at Covenant Life Church knew about these crimes but conspired to cover them up. They agreed not to report a known sexual predator to law enforcement officials. As a result of their criminal dereliction, Morales went on to abuse an even greater number of boys in multiple cities in different parts of the United States over the next 20 years. 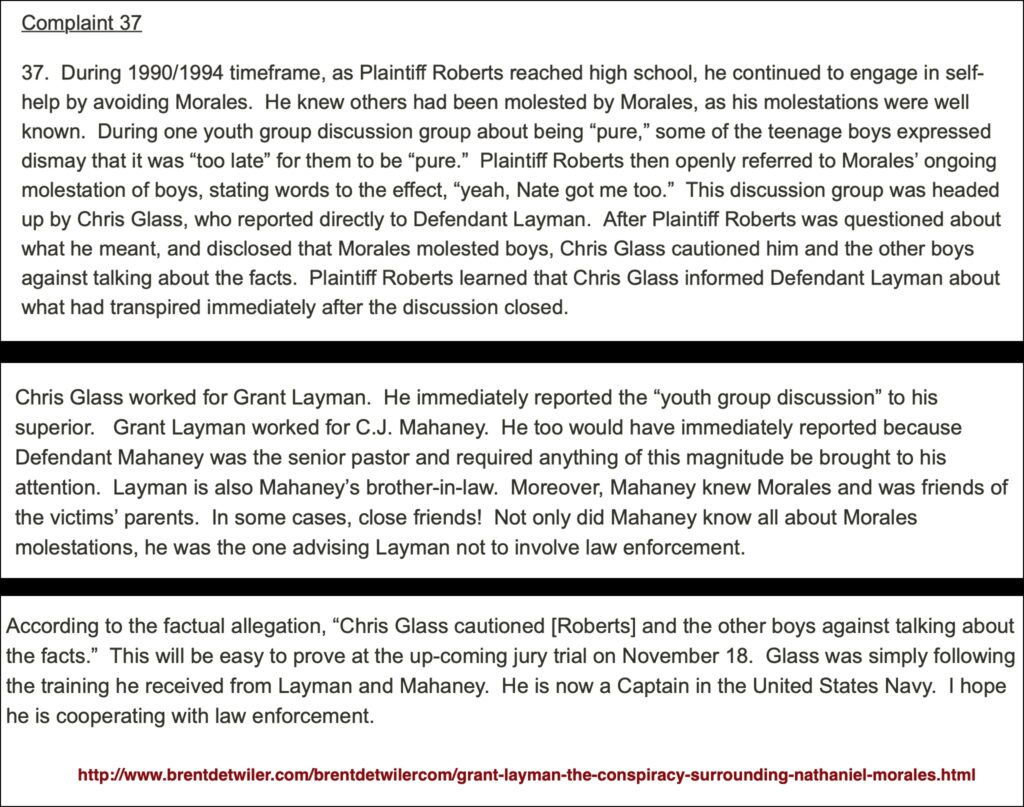 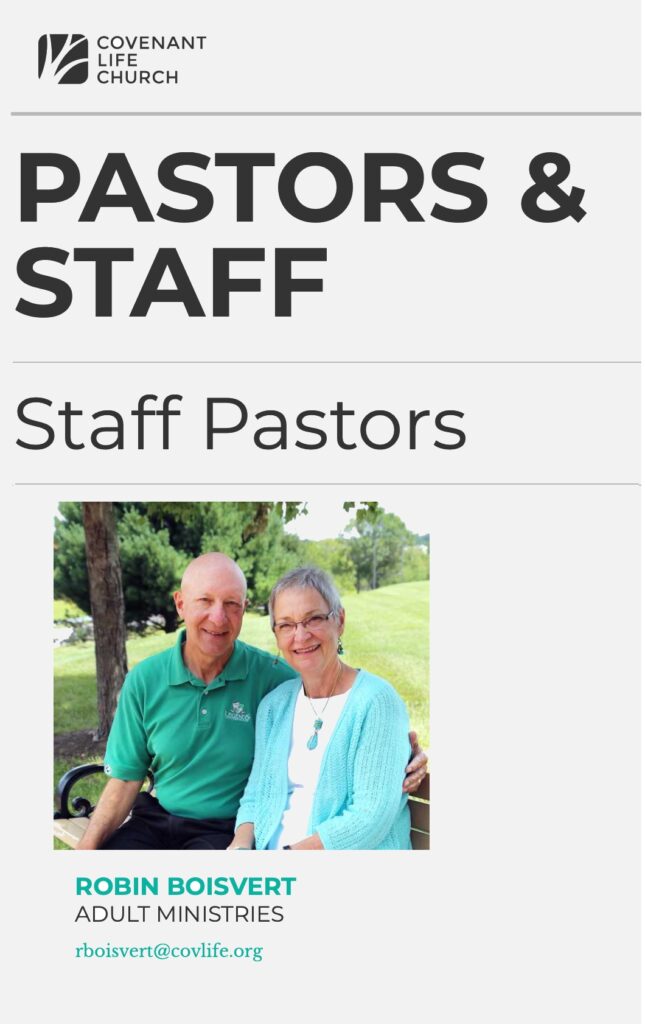 One man that was not a Covenant Life/Sovereign Grace employee, yet was close friends with C.J. Mahaney, was pastor Thurlow Switzer. Switzer was the Principal of MCCA and the Pastor of Northgate Community Church. Thurlow hired Nate Morales to be the Vice-Principal.

I was told that Rachel Bates, in a face to face meeting, advised Thurlow Switzer that Morales had sexually abused her brother, Sam.

Switzer did not inform Law Enforcement. As you can see below, Thurlow has since turned over the job of Lead Pastor to his son, Dan Switzer. (Much like Sovereign Grace, they are into nepotism.) Thurlow has (apparently) seen the resurrected Christ as he has been promoted to Apostle, no doubt by the direct order of the Lord himself. (Thurlow isn’t even a little “a” apostle, like Sovereign Grace men once were, so he must be the real deal.)

Meanwhile his son, Dan, has published a book titled “Train up a Child.” We can only hope Pastor Dan has more concern for children than  Apostle Thurlow seems to have had. 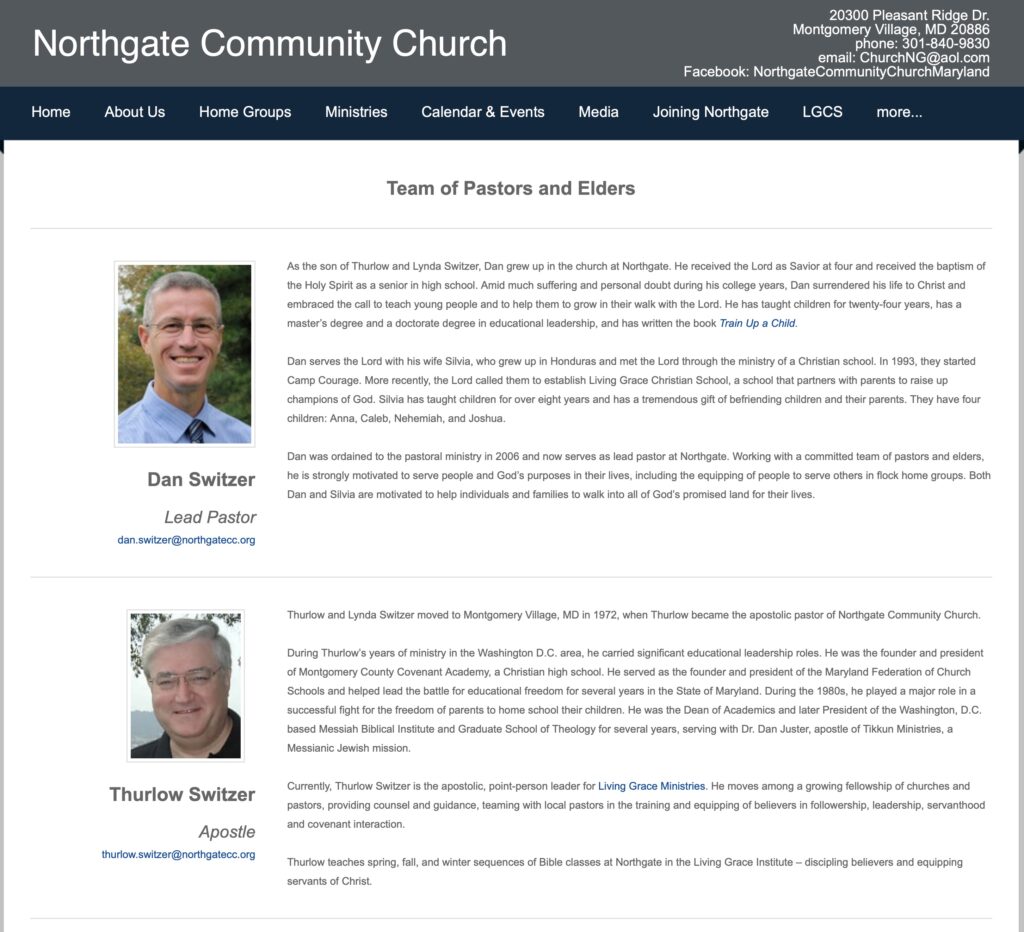