For a good overview of this blog post I recommend first reading a short article titled “Leadership rift sidelines three pastors at The Chapel: ‘Our church is in crisis,” by George W. Davis of the Akron Beacon Journal. (Alternate link on The Wayback Machine.)

“The Chapel” consists of seven campuses around the Akron area.  The events I am covering involve 3 men from 2 “Campuses.”  Tim Armstrong and Jim Mitchell are from the Akron Campus while Mike Castelli is from the Green Campus. Armstrong has been with the church for seven years while Mitchell has been there for 30 years and Castelli has been a pastor for 21 years.

The following is a description of events taken from “The Chapels” website:

A. On Thursday, May 20, Pastor Tim Armstrong (Senior Pastor) asked for the resignation of Pastor Mike Castelli (Campus Pastor, Green). When Pastor Mike declined, Pastor Tim ended Pastor Mike’s employment at The Chapel. Although further details surrounding the specifics of Pastor Mike’s termination are not immediately available, we can unequivocally state that there has been no impropriety of a legal, financial, or sexual nature.

On Friday, May 21, and Saturday, May 22, the Chairman of The Chapel’s Board of Trustees called a committee to conduct an inquiry into the events that transpired, in accordance with Constitution Policy C-19. (This policy can be reviewed in its entirety at the link in the Resources section below.) At that time, the Trustees placed Pastor Tim, along with Executive Pastor Jim Mitchell, on a voluntary administrative leave. In their absence, Pastor Mike was reinstated and also placed on administrative leave while the inquiry runs its course.
Source

The Chapel has been tight-lipped concerning the initial reason Senior Pastor Tim Armstrong asked for the resignation of Pastor Mike Castelli.  In a video I have watched from May 23, 2021, Green Campus assistant pastors Jeff Martell and Happy Peterson have adamantly stressed the unimpeachable character of pastor Mike Castelli. The Green Campus congregation seem to agree with Martell and Peterson as they gave a standing ovation to the absent Castelli when Martell stated that he knew they all loved Castelli.

When pastor Mike Castelli refused pastor Tim Armstrong’s request that he tender his resignation Armstrong fired him. This seems to have caused widespread resentment and anger among the Green Campus staff and membership. Martell, referring to the firing of Castelli, stated that some things you have to go to battle for, and this they apparently did. The uproar at Green Campus over the firing of their dearly loved pastor was effective, Trustees admitted their original communication was poor as it appeared they sided with Armstrong, saying he had the constitutional right to fire staff without the approval of the Trustees. Whether their original intent was to leave it at that – case closed, or their communication was just poor is open to debate. But they invoked a constitutional right the Trustees have in special cases to thoroughly investigate the termination of Castelli. As you read above, the initial actions of the Trustees were to place Armstrong and Mitchell on administrative leave and reinstate Castelli, placing him on administrative leave as well.

Unclear to me, and I assume most members of The Chapel are on what grounds did Armstrong fire Castelli and what exactly the role of pastor Jim Mitchell is in this affair.  The Trustees have stressed patience as they have hired an outside group to thoroughly investigate the matter and have promised to be transparent with the findings. In the meantime, the Trustees and pastors at both the Green Campus and the Akron Campus are exhorting all members not to engage in gossip or slander. This always seems to be the institutional response to leadership scandals; I think the wiser course of action is to be transparent throughout the entire process.

One observation I have made in researching this story is there seem to be two narratives coming out. On Sunday, May 23, 2021, as I stated above, Jeff Martell and Happy Peterson have stood by their pastor, Mike Castelli while Josh Lough, an assistant pastor at the Akron Campus was clearly shaken up by the loss of their two primary leaders, Tim Armstrong and Jim Mitchell. I have made a video clip (see below) from his sermon where Lough states:

“Is what is happening to this church an attack from Satan? Yes. Is sin involved? Yes.”

Now I would like to move on to why I am interested in this story. You may recall that slightly over one year ago (June 26, 2020) the Cedarville University Board of Trustees reinstated Thomas White as president. White had hired Anthony Moore with, in my opinion, full knowledge that Moore had been fired from the Village Church for secretly recording videos of his assistant pastor while he showered. The Village Church declared Moore unfit for ministry. Moore and White were good friends while at Southwest Theological Seminary.

To my knowledge, only two members of the Cedarville Board of Trustees voted against reinstating Thomas White.  These two were Danny Akin, president of Southeastern Baptist Theological Seminary, and Mark Vroegop, lead pastor of College Park Church in Indianapolis. Both men were so disturbed by the vote to reinstate Thomas White that they resigned their positions from the Board of Trustees.

Here is Akin’s letter of resignation: 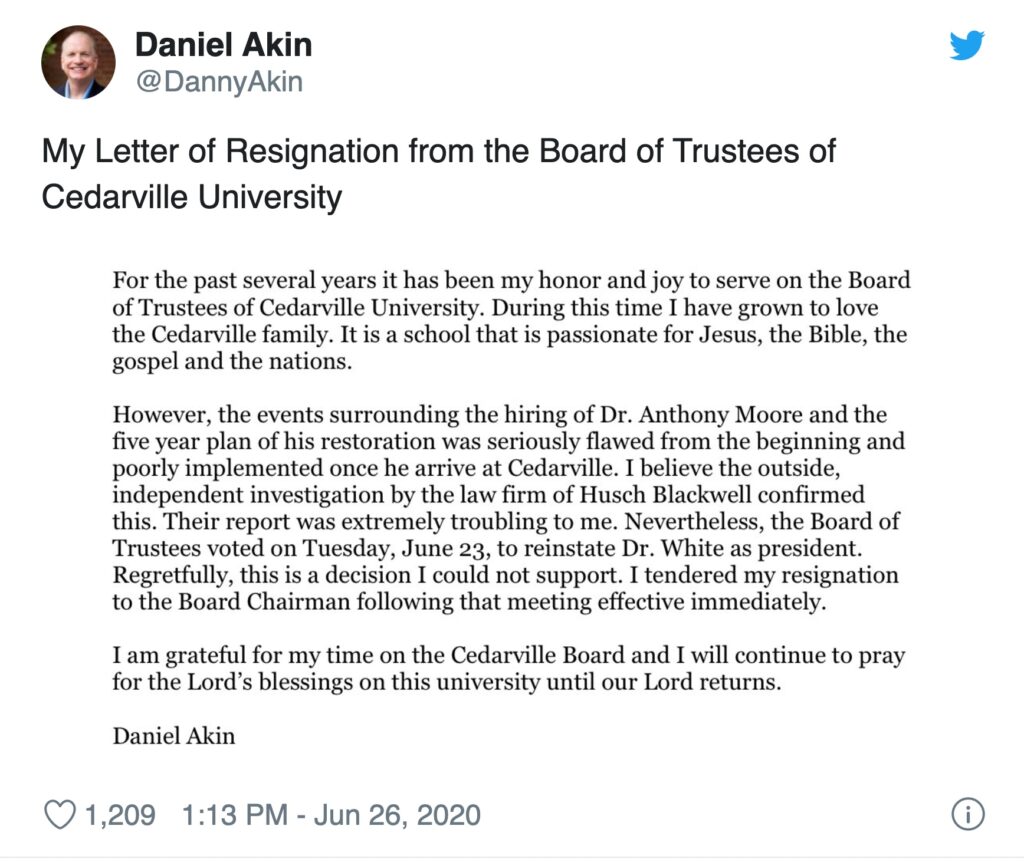 Vroegop issued a similar statement on his website, saying he “could not support” the direction of the board, and that he did not “believe these steps are sufficient in light of what the report revealed.

Guess who else was/is on the Cedarville University Board of Trustees? 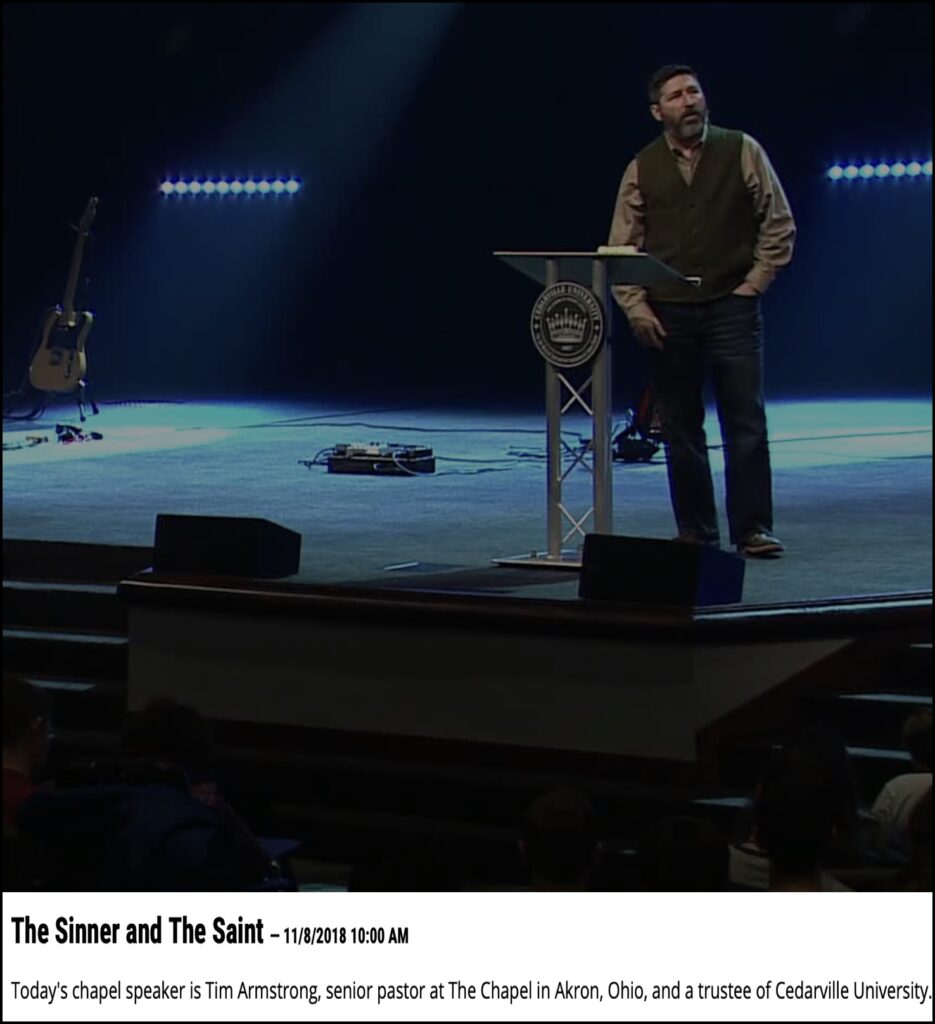 Tim Armstrong apparently had Thomas White’s back in the vote to reinstate him.  And why not? Hunting buddies stick together through thick and thin. 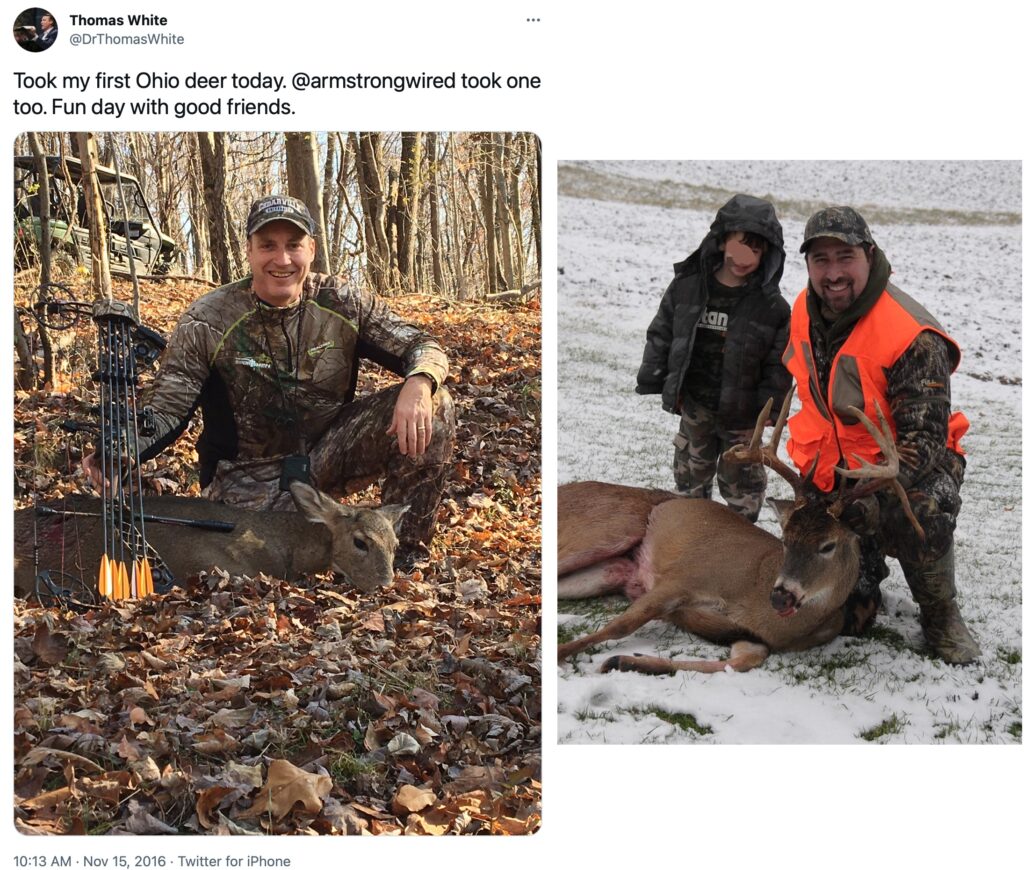 Tim Armstrong has spoken at Cedarville University several times since his hunting buddy has been the President of the institution:

I must admit, all this has me wondering just what is going on at The Chapel.