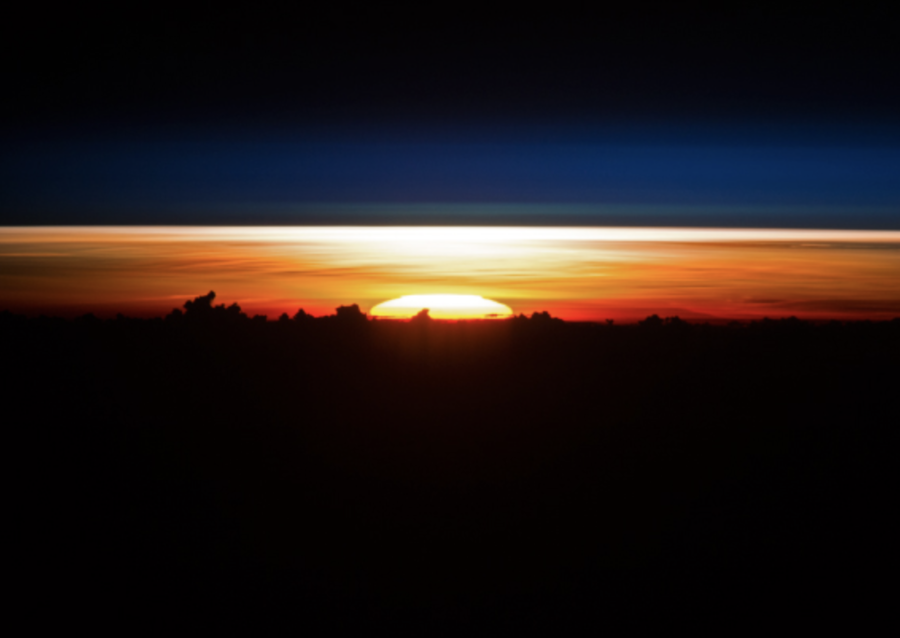 Sunrise Over the Philippines-ISS/ NASA

Sewanee: The University of the South, is commonly called Sewanee. According to Wikipedia:

(It) is a private Episcopal liberal arts college in Sewanee, Tennessee. It is owned by 28 southern dioceses of the Episcopal Church and its School of Theology is an official seminary of the church. The university’s School of Letters offers graduate degrees in American Literature and Creative Writing. The campus (officially called “The Domain” or, affectionately, “The Mountain”) consists of 13,000 acres of scenic mountain property atop the Cumberland Plateau, with the developed portion occupying about 1,000 acres.

I had the opportunity to tour this beautiful school a few years back. It is almost idyllic, with students running around in academic black robes if they are doing well in their studies. The school is quite isolated given its location.

n September 2020, the board released a statement acknowledging for the first time that the University “was long entangled with, and played a role in, slavery, racial segregation, and white supremacy”. It added that the university “categorically rejects its past veneration of the Confederacy and of the “Lost Cause” and wholeheartedly commits itself to an urgent process of institutional reckoning …”.The university announced that it will utilize the findings of its Roberson Project on Slavery, Race, and Reconciliation (which began in 2017) to guide their current discussions and path forward

Reuben E. Brigety II: The first black President of Sewanee who was appointed in June 2020.

American diplomat and academic and currently Vice-Chancellor and President of the University of the South, in Sewanee, Tennessee.

Previously Brigety served as the Dean of the Elliott School of International Affairs at The George Washington University. Prior to that, Brigety has served as United States Ambassador to the African Union, as a Deputy Assistant Secretary of State, and as Permanent Representative to the United Nations Economic Commission for Africa.

Brigety has attempted to deal with the drug and alcohol crisis on the campus. When I visited the school with my daughter,  I became concerned about the evident drinking problem on the campus. They actually have a bus that roams the streets on the weekend to pick up the drunk students and return them to their dorms. I realized that the students are essentially stuck on a beautiful mountain campus. This insulation was one of the reasons she did not apply.

Racially based attack at President Brigety’s home on the campus.

On March 16,20201 The Washington Post wrote: ‘We are not leaving’: Sewanee’s first Black leader helps propel a racial reckoning at university. According to Brigety:

“Chen Hall, our home, has been repeatedly vandalized by phantoms who came at night,” Brigety told the university in remarks recorded on video. “They have trashed our lawn with beer cans and liquor bottles. They have left threatening messages on pilfered signs near our back door. And they have taken measures to ensure my family and I saw the indecent insults that they left behind.”

Brigety had had enough. On February 7, 2021, he delivered a speech to the university body titled “Growing in Grace” which can be heard at this link. According to the Washington Post:

Brigety declared that he would forgive the phantoms but not give in to them. “The sanctity, the security and the dignity of my family are inviolate, and we are not leaving,” he said. And then Brigety summoned the university community — faculty, staff, students and alumni — to hold a dialogue about its values. “It is up to you to decide who we are, what we will tolerate and how we will live together,” he said.

Racial slurs at a lacrosse game

At a recent lacrosse game, racial epithets were used by a few Sewanee students and were aimed at the Emmanuel College athletes which included a number of racial groups. Sewanee is composed mostly of all white students. According to the Washington Post:

On Sunday night, Brigety disclosed that a few Sewanee students attending a weekend lacrosse match had shouted the n-word and other racist epithets at a visiting team from Emmanuel College in Georgia. The visiting squad included African American, Asian American, Native American, White and Latino men, Brigety wrote. The Sewanee roster appears to be mostly White.

“So pronounced were the shouted slurs in the third quarter that the game officials on the field ordered that Sewanee fans be cleared before play could continue,” Brigety wrote in an email to the campus community. He and the athletic director apologized to the visitors after the match and pledged to investigate. Exactly how many students were implicated in the use of epithets was unknown. Hundreds walked out of class Monday, Brigety said, to demonstrate against racism.

The University was the only institution of higher education designed from the start to represent, protect, and promote the South’s civilization of bondage; and launched expressly for the slaveholding society of the South,” Sewanee history professors Woody Register and the Rev. Benjamin King wrote in a research summary last year for the Roberson Project.

After the Civil War, Register and King wrote, Sewanee’s “identity as ‘a child of the Confederacy’ emerged in many ways: Those who held key leadership roles typically had been slave owners, defenders of slavery and secession, and Confederate military leaders; and some of the most consequential donors had been the owners or beneficiaries of some of the largest slavery-based plantations in the antebellum South.”

In September, the university’s board of regents finally admitted to the homage of its Confederate past.

the university’s board of regents issued a landmark statement acknowledging that Sewanee “was long entangled with, and played a role in, slavery, racial segregation, and white supremacy.” The board also declared: “The University of the South categorically rejects its past veneration of the Confederacy and of the ‘Lost Cause.’ ”

An uncomfortable, racially insensitive statement from the Episcopal Church bishops of the Sewanee Province

Folks, this an example of how clueless we can be when it comes to racial matters. This obvious mistake is something worth discussing. The Bishops of Sewanee Province stepped in to condemn racism. Episcopal Cafe posted Province of Sewanee bishops condemn racist incidents. Here is their statement with the insensitive remark highlighted.

As Bishops of Province IV of The Episcopal Church (also known as The Province of Sewanee) who share in the oversight of the University of the South, we in no uncertain terms condemn the harassment of the Vice Chancellor of the University last month by, as of now, unknown vandals and the more recent racial epithets hurled at scholar athletes from a visiting college by young people in the crowd during a lacrosse game. We hope and pray those engaging in such despicable behavior are not students at the University. In our minds, any racist behavior is intolerable, does not represent the virtues of our faith, and we denounce it emphatically. We trust the Vice Chancellor and the University Regents will together address these hateful acts with all deliberate speed.

My good friend at The Anglican Watch pointed out the embarrassing error to me. He wrote about it in Episcopal Church Invokes Language of Segregation in its Condemnation of Racism.

In a letter from the bishops of the Sewanee province condemning recurring incidents of racism at Sewanee, an Episcopal college in the south, the bishops stated emphatically that the oppose racism. So far, so good.

But the closing sentence is one that will make many African-Americans and others concerned about racism cringe:

We trust the Vice Chancellor and the University Regents will together address these hateful acts with all deliberate speed.

Why is that so offensive?

It’s because these are the weasel words from the Supreme Court’s 1955 decision in Brown v. Board of Education II, which followed a previous case that held separate but equal inherently unequal. Thus, it was this very language, calculatedly elusive, that led to the massive resistance campaigns in the south, Freedom Summer, the so-called “private schools” of the Deep South, and years of defiance, before the Court again waded in the mess in 1978. As one author put it, this language was “a palliative to those opposed to Brown’s directive.”

Was the slap at African-Americans intentional? I think not. But the fact that the church is so clueless as to invoke a wolf whistle from the segregation years is shocking and appalling, and shows that the church doesn’t even know what questions to ask.

Moreover, most of these dioceses have chancellors, as well as lawyers who are members. The fact that no one appears to have waded in and said, “What the hell?,” is alarming and appalling. Could the Episcopal Church get any more clueless?

I think my head is about to explode.

I just finished reading a bunch of articles on this phrase “With All Deliberate Speed.” Google it. Many articles show up. The best short description of this was found at the Smithsonian Museum of National History.

With All Deliberate Speed”

The Brown decision declared the system of legal segregation unconstitutional. But the Court ordered only that the states end segregation with “all deliberate speed.” This vagueness about how to enforce the ruling gave segregationists the opportunity to organize resistance.

Although many whites welcomed the Brown decision, a large number considered it an assault on their way of life. Segregationists played on the fears and prejudices of their communities and launched a militant campaign of defiance and resistance.

There was even a book written about this phrase: With All Deliberate Speed: Implementing Brown v. Board of Education

Can I be honest? I didn’t know about this phrase and how it might bring back pain for African Americans. This taught me a hard lesson on racism. How little I know about the pain of the past! I don’t believe the bishops knew about this phrase either. It was an inadvertent mistake but it was a mistake that could hurt some people. This is proof we all have a long way to go when it comes to racism. At least I know that I do.

@wartwatch Judge Christy Comstock was appointed on May 1, 2021 for an 8 year term to the Western District of Arkansas. Therefore, Josh Duggar was one of her first cases. According to her LinkIn page she has no prior judge experience. https://t.co/isCwmEscaH
View on Twitter
3
0