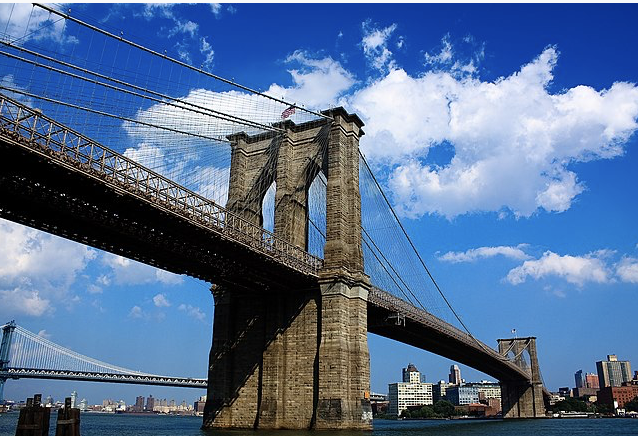 “At 8:23 there seemed every chance of a lasting alliance starting between Florin and Guilder.
At 8:24 the two nations were very close to war.”
― William Goldman, The Princess Bride
I recently received a message from an individual involved with the Brooklyn Tabernacle Forum. Here is what this person wrote.

I was very interested in what was going on at The Brooklyn Tabernacle. In my 12 years of blogging, I have received a number of emails from members of The Brookly Tabernacle expressing dismay in how TBT is run, especially stating concerns about financial irregularities. There were also some comments at TWW pointing out concerning stories on the lack of attention to some female attendees which resulted in disturbing outcomes.

However, the information shared was complex and I had a hard time wrapping my head around it. Well, this website takes care of any confusion. The writer claimed that it is a meticulous website with cited information. Was it ever!  I am embarrassed to say that I didn’t know about a number of issues dealt with by the writers. I do not know the names of any of the folks involved in the website and will plan to keep their identities secret I learn their names. Every time I received information in the past, the writers were concerned about confidentiality.

This post is only Part 1. I started writing and realized I couldn’t get it all in.  So, I started with what jumped out at me. In Part 2, I will discuss the financial irregularities as well as TBT’s  close ties to Ravi Zacharias.

It is my opinion that anything linked to the Latter Rain/NAR movement is suspect. Wikipedia gives a pretty good overview although I believe some of these folks want to take it to a whole new level.

The Latter Rain Movement, a world filled with Temples and Tabernacles, played a significant role in the historical context of The Brooklyn Tabernacle (TBT), if traced through the vast influence of Clair Hutchins, Jim Cymbala’s father-in-law, co-founder of TBT, then known as Brooklyn Gospel Tabernacle.

The Latter Rain Movement’s influence includes movements such as: Voice of Healing, Manifest Sons of God, Charismatic Renewal, Jesus Freak Movement, the Shepherding Movement, spearheaded by Don Basham, Ern Baxter, Bob Mumford, Derek Prince and Charles Simpson, all of which gave rise to more current heretic movements such as Dominionism and the New Apostolic Reformation (NAR). A quick summary on the Latter Rain Movement can be found HERE.

…While the Brooklyn Tabernacle (TBT) has been portrayed as a non-denominational church, they are historically affiliated with the Independent Assemblies of God International (IAOGI),

…The IAOGI is a separate denomination from the larger, well-known Assemblies of God (AOG). A key differentiation between the two is the IAOGI endorsement of the heretical Latter Rain Movement,

The AOG ardently denounced the Latter Rain Movement (LRM) in 1949, for their grave concerns over issues such as the hazardous authoritarian control given to their “men of God” leaders and pastors. No background checks were required of their leaders, nor was any adequate doctrinal understanding. Contrary to the AOG, the IAOGI fully embraced the LRM.

The author points to the development of the Full Gospel Business Men’s Fellowship which attracted a virtual Who’s Who of evangelical *influencers.* (Great word pick, TBTF!)

TBT is even tied to the Billy Graham Evangelistic Associations, Samaritan’s Purse, and The Cove (a beautiful center in NC featuring well-known speakers.)

The choir appeared at a couple of Crusades in the 90s.

Jim is also a regularly invited speaker at The Billy Graham Training Center at The Cove, with the invitation coming from Billy’s grandson, Will, the Executive Director, who, in turn, preached at TBT. Cymbala spoke at the October 2018 Samaritan’s Purse Medical Missions Conference, where Franklin Graham referred to Jim as one of his heroes.

Although some of the associations with the Christian and Missionary Alliance, AOG, Teen Challenge, etc. were not surprising to me. However, TBT’s strong links to the SBC are a puzzle. TBT is heavily charismatic, has ties to the Latter Rain Movement, and ties to the New Apostolic Reformation. Historically this doesn’t seem to make sense given the SBC history and polity. Yet the SBC leaders appear to love Jim Cymbala. Why is that?

Even though the Southern Baptist Convention (SBC) canceled their Annual Meeting in Orlando, #SBC2020, which was originally scheduled to take place in June 2020, it is important to note that Jim Cymbala was to be a featured speaker at the SBC Pastors’ Conference leading up to the Annual Meeting event.

Go to the above link to find more information regarding the following. 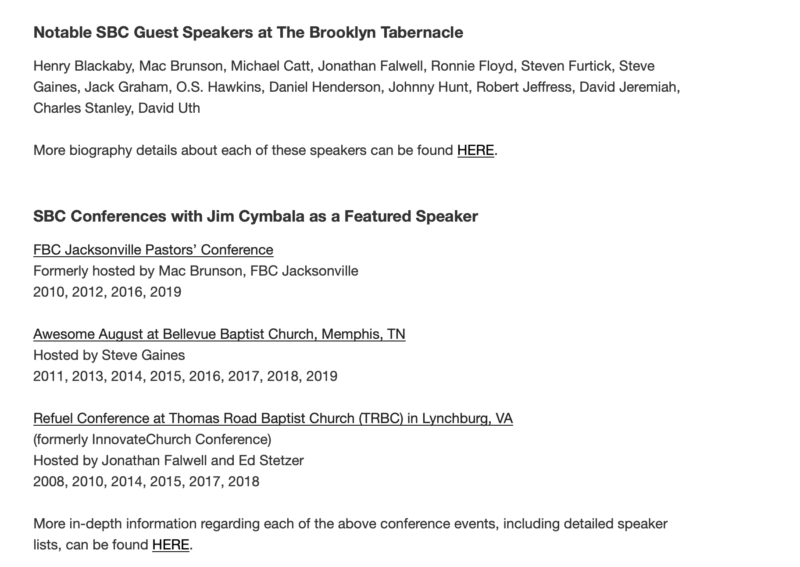 If you go to the above linked page, I think you might be surprised to see the number of SBC related events in which Cymbala was a featured guest.

This gets even more bizarre. Remember, Patterson is the unofficial head (IMO) of the Conservative Baptist Network. As such, his doctrinal position should be at the opposite end of the spectrum from that of TBT and related enterprises. Yet after viewing the above connections with the SBC, this should not come as a surprise although I think it is a little tacky the PP had the students sign up for the TRN app.

A quick scan at the typical speaker for Chapel during the Fall of 2017 includes pastors, seminary professors, and the like. The addition to that list of Steven Vornea, CEO and Entrepreneur, is puzzling, especially noting his presentation is the only one without any scripture references.

…Steven’s speech at SWBTS, My Story, incorporated some background on his life, plus how he got started in real estate: “the real way to make money in this business, you gotta be your own bank.” A considerable amount of time was spent detailing how he met Jim Cymbala a few years prior, and became involved with The Brooklyn Tabernacle (TBT).

According to Vornea, Cymbala needed help with the “mounds of debt on all his properties.” Vornea’s assessment was that Cymbala and TBT had been “taken by your own bank,” who, at that time, wasAmerica’s Christian Credit Union (ACCU). As such, Vornea “helped him [Cymbala] restructure all his [TBT’s] debt,” while reminding the audience, and as he alluded to on his website bio, it is “all volunteer work.”

From there, Vornea continues: Jim Cymbala “introduced me [Vornea] to so many other pastors and other faith-based organizations.” Among those, Don Wilkerson and Brooklyn Teen Challenge, who were “financially having a hard time,” and needed Steven’s help.

The remainder of Vornea’s speech was dedicated to the presentation of his then-newly formed organization, The Recovery Network (TRN), targeting the family members of those struggling with addictions, when it was revealed SWBTS then-President Paige Patterson was on the TRN Advisory Board. Vornea then implored the SWBTS student Chapel audience to register for the TRN app.

About 3 years after the SWBTS promotional opportunities for The Recovery Network undergirded and endorsed by then-President Paige Patterson, a current check of the TRN website indicates it is now defunct.

And then there is the case of MinistrySafe and TBT. The NYT which claimed they represent the organization, not victims link (scroll down halfway)

Wouldn’t you know it? besides Paige Patterson, Ministry Safe shows up to protect TBT from a lawsuit! They claim they protect victims and appeared to get really mad at the NYT.                     Surprised? Not on your life.

According to their website, where The Brooklyn Tabernacle is listed as a Ministry Partner, “our mission is to protect children and those who serve them.” Forging a partnership with an organization like Ministry Safe likely reduces liability and insurance costs, all of which affect the financial bottom line at churches.

A huge chunk of what Ministry Safe offers is tools and trainings for organizations, which appears to support their mission. Ministry Safe also can be hired as consultants to provide direction and legal counsel when allegations of abuse surface within an organization.

It is in this area of their expertise which has raised some eyebrows, highlighted in a June 2019 New York Times article, as this would align them with the protection of the organization, not the vulnerable whom they claim to protect. 🙄

Looks like Ministry Safe disagrees which is really confusing to me, not being a lawyer and all. However, I need to put their rebuttal here because well, you know. Ministry Safe Responds to False Statements in New York Times Article Please read their entire article for context. Remember it is written by lawyers…

What we do: In our law firm, we litigate in a very specific context. That context is this: A child has been sexually abused while his or her parents were involved in a cult, and the abuser was in a position of spiritual authority over that child and family.

…Why we do what we do: We are Christ-followers, and saw a great need: The church was being left behind, poorly addressing this known risk, and commonly responding poorly to abuse allegations when these crises arose.

I wrote this article a couple of years ago which may give context to this hoopla. Ministry Safe Video: They Claimed to Be Victim-centric and Would NEVER Sue a Church Because They Don’t Tear Down Churches. The following video from that post appears to indicate that Ministry Safe would never sue a church. Maybe they just sue cults? Sometimes I can’t tell the difference but they must be smarter than me.

However, whatever MinistrySafe does, TBT appears to have hired them for something.

There is far more to discuss and I plan to get to it next time unless another pastor drops a bombshell and has an emergent need for MinistrySafe.