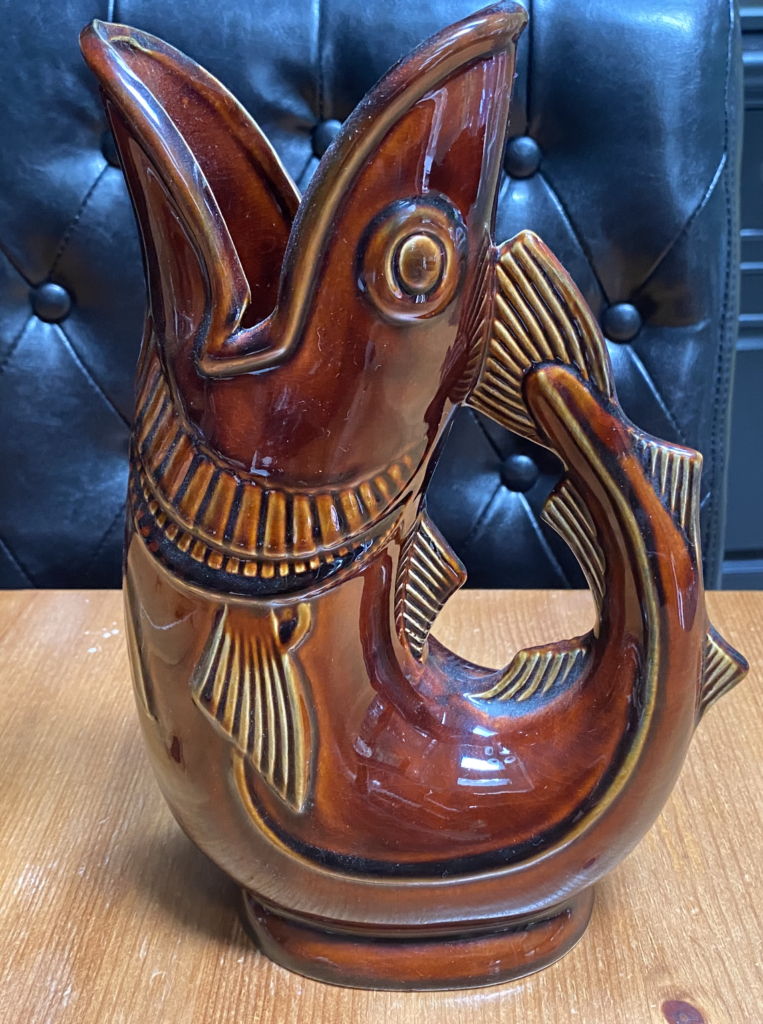 When my father started school, he couldn’t speak English. His parents were Russian immigrants who lived in the Russian/Polish section of Salem, Massachusetts. When asked his first name, he gave a version of the name *William* in Russian. The intake officer didn’t know what he was saying and decided it sounded like *Walter.* His legal name was recorded as Walter Nalesnik. However, all of his Russian and Polish friends knew his real name was William so he was called *Bill* by all. That is how *Walter* became *Bill.* He experienced much discrimination. Epithets like *Red* or *Commie*   was often thrown at him. it was something that bothered him all of his life.

Despite his many foibles, he was virulently anti-discrimination be it due to skin color, economic status, or national origin. He even enjoyed a closeted gay couple who first came to him as patients (He was a family doctor.) The vase at the top of the post was a present from this couple to me when I got married. Both my brother and I grew up enjoying people from all nations, colors, and social situations. Perhaps the best example of his view of people was the day I brought home an African American seminary student whom I dated a few times. My dad was so excited, asking him all sorts of questions about his family, goals, and his favorite subjects. When that nice man and I went out separate ways, my father told me that he had liked him and was rather sad the relationship hadn’t continued.

I spent two years on the Navajo Reservation working for the Tribe. They schooled me in the horrific treatment of Native Americans by the US government throughout the years. Do you know about the Trail of Tears? How much of this was covered up by the government? I was so glad to be able to take my aging father onto the reservation to sew how medical care is delivered. At one point I saw my dad speaking to a very old medicine man while my mother was holding a beautiful Navajo toddler. You can imagine the questions that he raised in the aftermath.

Moving to the South was a bit of a shock to me. So many people told me that the Civil War had nothing to do with slavery. It was about *states rights.* I would quietly disagree. I had one person tell me that integration went well in the schools. He said that there was an African American boy in his class and everyone was friendly to him. So, I asked him if he had ever invited this black boy to his home or the movies. Silence. Don’t even get me started on the Confederate flag. It seemed so unnecessary. But, after all, I’m a damn Yankee.

My hard questions about the Holy Spirit and slavery

Before I begin, let me acknowledge the many Christians who spoke out against slavery-like William Wilberforce, John Wesley, Charles Spurgeon, Charles Finney, and Harriet Beecher Stowe. I’m going to open up a bit on an issue with which I struggle. As a Christian, I believe that the Holy Spirit indwells each believer. As a Lutheran, I believe that Jesus is present in the communion. He who dwells within me is the Source of Truth.

The SBC lurches from crisis to crisis, often forgetting the old one for the new one.

A year ago, the lid was blown off the SBC penchant for denying and covering up the many, many reports of sexual abuse of children as well as adults in many churches. I’m sure you remember that heads were going to roll and those bad actor churches would be thrown out…but they weren’t. And all the actions that were supposed to take place, didn’t. There is all sorts of politicking going on involving the Executive Committee and it has been rather ugly. I will try to get to that in a coming post. What this means is that sexual abuse is back burnered. It is one year later and there is NOTHING except a nice manual which churches are free to accept or not accept. Caring Well has been buried for the time being because…they don’t really care that well. I have news for you. I’ve talked with some churches and have found they don’t follow the manual that well except they have one to show everyone they *care.*

Two other recent stories are contributing to the *ouch factor* of the post.

1, Alabama SBC pastor and state legislator, Will Dismukes, was forced to step down after giving the invocation at an event honoring Confederate and Ku Klux Klan leader Nathan Bedford Forrest.

2. Eric Metaxas decided to tweet that Jesus was white and it was not well received…

Dee upset the pug dogs by banging her head on the kitchen table after reading these two stories. Night after night, there are protests over racism. How could these guys be this out of touch?

Cornerstone Church in Atlanta is leaving the SBC due to racism.

I want to thank SBC Voices. I regularly read their blog. They keep me up on all sorts of things *SBC.* They posted Leaving the SBC behind? This has to be discussed about Cornerstone Church. I think this is a harbinger of things to come for the beleaguered SBC.

According to the  Christian Post in Cornerstone Church Atlanta votes to leave SBC: ‘We should’ve done it sooner,’ black pastor says:

“On Sunday we voted as a church to leave the SBC. I don’t say this for applause (there’s nothing particularly commendable about our decision). I only mention it to bring clarity surrounding where (and with whom) we stand in days like this. Frankly, we should’ve done it sooner,” Onwuchekwa wrote in a series of tweets last Friday.

Pastor Onwuchekwa said he was concerned that other churches of color would think it was safe for their church to join in with the SBC because Cornerstone was a member. OUCH!

Onwuchekwa hinted that among the reasons his church is severing ties with the SBC is that he did not want to send the wrong message to particularly other Christian leaders of color that the organization is healthy for them.

“Often when you find yourself with people you dearly love and want the best for, you end up staying around longer than you should. That was us. In the coming weeks, I’ll be more vocal and comprehensive as to our reasons why. But for the time being, I’ll say this much,” he continued. “Whenever you swim in certain streams, you implicitly hold up a sign that says ‘Come on in, the water’s fine.’ We don’t want to hold up that sign. Instead, if I’m going to hold up any sign—it’s going to be one on the outside of the pool that says ‘Enter at Your Own Risk!’”

According to Christianity Today, Onwuchekwa is a council member of The Gospel Coalition. Apparently he felt sidelined when he brought up issues of social justice with the SBC.

Onwuchekwa also pointed to SBC leaders who had close ties to Trump, as well as a controversy over a resolution to denounce the alt-right at the SBC 2017 annual meeting. At first, the SBC committee in charge of resolutions decided not to put the resolution to a vote. A revised version of the resolution was later approved.

Onwuchekwa was also concerned when critics of the SBC’s Ethics and Religious Liberty Commission and its leader, Russell Moore, tried to defund the group.

The folks at SBC Voices pointed to an underlying issue that could easily be overlooked.  They quoted from Christianity Today which posted Atlanta Church Splits With SBC for Downplaying Racial Issues. It appears the response from the SBC is more concerned with money issues.

When Cornerstone ­­­­needed a building, the SBC helped the church get a loan. Last year, when the church wanted to renovate the building, it got a $175,000 grant from NAMB to assist with that. The grant was distributed through Blueprint Church, another local congregation that partnered with Cornerstone as a “sending church.” Blueprint’s pastor, Dhati Lewis, serves as one of the vice presidents at NAMB.

It appears some SBC leaders think he Onwuchekwa needs to pay the money back. Kevin Ezell, head of the NAMB (North American Mission Board,) apparently hinted around that he wants the money back.

A few days after Onwuchekwa announced the church’s decision on Twitter, he and Ezell texted each other about the fallout from the announcement. That conversation led to Ezell bringing up the topic of money.

“The SBC has been very generous in their investment in Cornerstone and you,” Ezell told the pastor.

Ebert told Religion News Service that there was no written agreement saying Cornerstone would have to return grant funds if it left the SBC. But NAMB did expect that the church would remain part of the denomination.

“We wouldn’t invest in a church if we thought the commitment to the SBC was not there,” he said.

Ezell expressed great love for  Onwuchekwa and said that the Apostle Paul and Mark went their separate ways. I looked over that story which is found in Acts 15:36-16:10. I see no discussion about Mark forking over any funds to Paul. Apparently Onwuchelwas wasn’t thrilled about Ezell’s s big ask and recalled how much was taken from the slaves in the past. SBC Voices said that there was no written agreement regarding the church’s obligations in the matter.

Onwuchekwa, son of Nigerian immigrants desires another conversation about repayment, more to be done to “reckon” with the pre-Civil War founding and founders of the SBC. Those in his congregation would certainly include many descendants of slaves. I’m OK with having that conversation too.

A fair number fo commenters at SBC Voices believe that there should be better policies in place for how funds should be used. Most appear to believe that money should only be used for SBC activities. I found this rather humorous because David Platt, former head of the IMB, reportedly used church funds to support missionaries who were not part of the SBC. I think that this is the best comment of the lot.

The chickens are truly coming home to roost. Lots and lots of chickens. I predict the SBC is going to have some difficult days ahead. I wonder if they have anyone who is skilled enough to handle such huge issues? About the only thing good coming out of this mess is the Calvinist wars seem to have faded a bit.
I would love input into my questions regarding how Christians centuries ago could condone slavery.